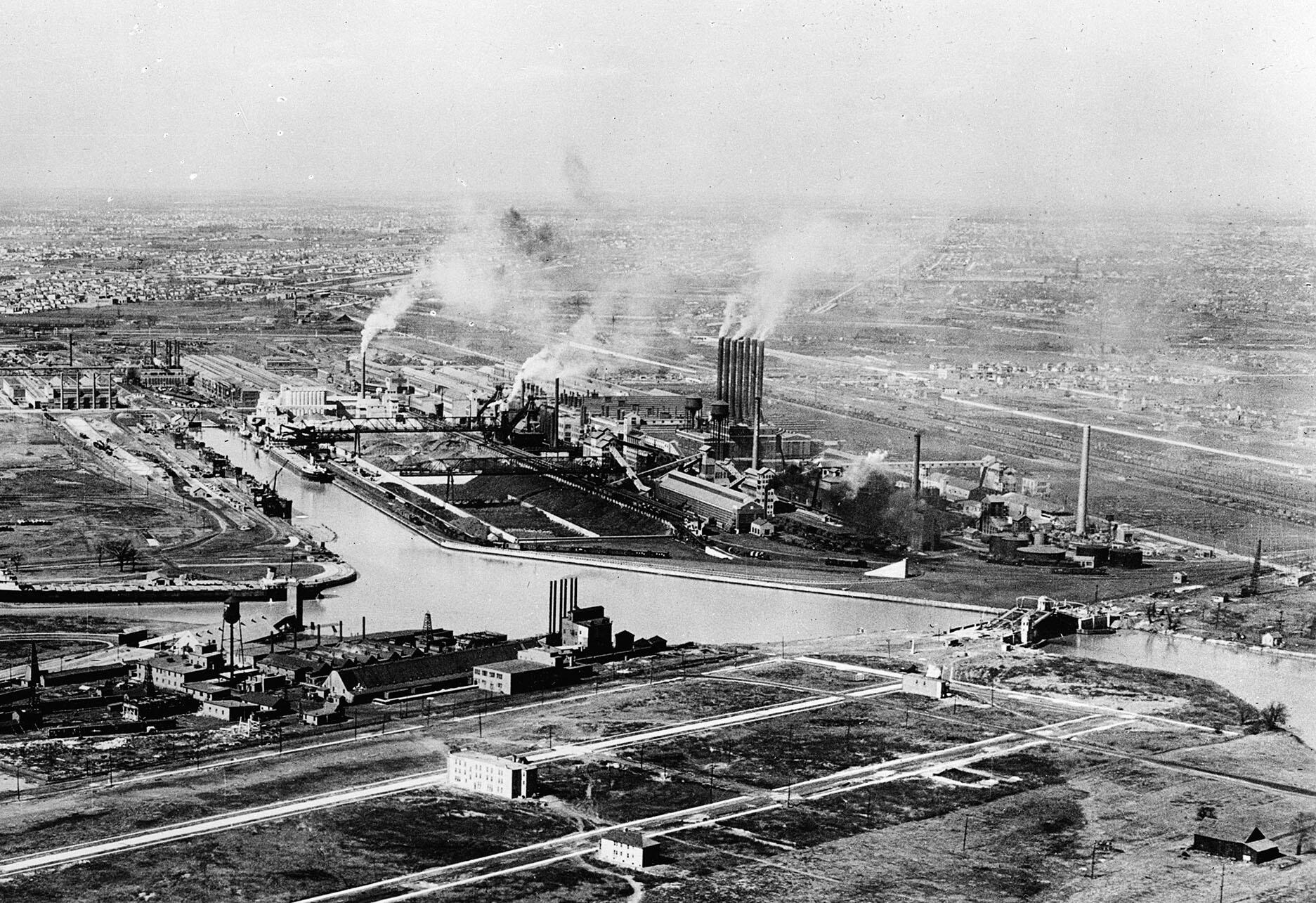 The Great Depression was a tough time in Detroit. The city’s unemployment hit 50 percent, twice the national average, and economic collapse translated into fear and desperation. A plaque on the Fort Street Rouge River Bridge, not far from the sprawling Ford River Rouge plant, commemorates a traumatic and defining moment. It reads:

“On March 7, 1932, in the midst of the Depression, unemployed autoworkers, their families and union organizers braved bitter cold temperatures and gathered at this bridge, intent on marching to the Ford Rouge plant and presenting a list of demands to Henry Ford. Some three thousand ‘hunger marchers’ paraded down Miller Road. At the city limit, Dearborn police blocked their path and hurled tear gas. The marchers responded with rocks and frozen mud. Near Gate No. 3, the demonstrators were bombarded by water from fire hoses and a barrage of bullets. In the end, five marchers were killed, nineteen wounded by gunfire and numerous others by stones, bricks, and clubs. Newspapers alleged the marchers were communists, but they were in fact people of all political, racial and ethnic backgrounds.”

At a memorial, days later, 60,000 Detroiters marched through the center of the city in grief and solidarity for the five demonstrators who had been killed.

A month-and-a-half  later, in the midst of a plummeting economy and social upheaval, Diego Rivera and Frida Kahlo arrived in Detroit, where they would spend the next 11 months. Rivera was 44 years old and a world-famous muralist; Kahlo was 24 and an artist who had yet to make her mark. They would both do great things while in Detroit and be forever changed by the experience.

Edsel Ford, president of the Ford Motor Company and one of the richest men in the world, had commissioned Diego Rivera to paint a mural that captured the spirit of the city for the newly inaugurated Detroit Institute of Arts (DIA). “Machinery has always fascinated me,” Rivera had said. After touring Detroit during those dark times, he was amazed by the Ford Rouge plant, the largest manufacturing complex in the world. Rivera was struck by the power, importance, industrial precision and, for him, poetry of what he saw. Ford-owned boats brought iron ore and limestone to the docks of the 1,000-acre complex; workers tended blast furnaces and rolling mills to make steel, fed presses that stamped steel into fenders and hoods, produced engines and glass, and put together the Model B Fords that rolled off the Rouge assembly lines, now slowed by a paralyzed economy.

Rivera was deeply sympathetic to the workers. He still viewed himself as a communist, despite having been expelled from the Mexican Communist Party in 1929. At the Rouge, he thought he was looking at the future, although it was admittedly stalled in the present. He felt he was at the epicenter of an industrial system whose assembly lines would transform the world. “In the future,” he would write in his autobiography, “man and machine would be as important as air, water, and the light of the sun.” Rivera began to sketch and draw almost immediately.

His original commission was to paint two murals on opposing walls of the DIA’s Garden Court, a vast and elegant enclosed courtyard, in the heart of the museum. Once he began, however, the project would expand into 27 panels covering all the available wall space in the room.

As Rivera explored the Ford Rouge plant and sketched the people and process, my grandfather, Philip Chapman, was toiling on the line. He had come to Detroit in 1913, a Russian immigrant via Bel Air, Ohio, for the $5 day at the Ford Highland Park plant where the auto assembly line was born. Later, he would spend more than two decades working on the line or operating machines at the Rouge. Their paths might even have briefly crossed amid the machines, conveyors, and noise of fast-paced industrial production.

When Rivera finished the murals, he reportedly felt they were his best work. Ten thousand people packed into the museum for their opening in March 1933. Not everyone was pleased. The New York Times reported on the opening in a story with the headline of “Detroit in Furor Over Rivera Art,” pointing out the “murals scored as communistic.” The Detroit News ran a scathing front-page editorial. “Rivera’s whole work and conception is un-American,” the News concluded. “The best thing to do would be to whitewash the entire work completely.” Workers volunteered to defend the murals, which delighted Rivera, who in the midst of the uproar said, “My public is made up of the workers — the manual and intellectual workers.” Prominent citizens also stepped up to the plate. “I admire Rivera’s spirit,” Edsel Ford responded. “I really believe he was trying to express his idea of the spirit of Detroit.” 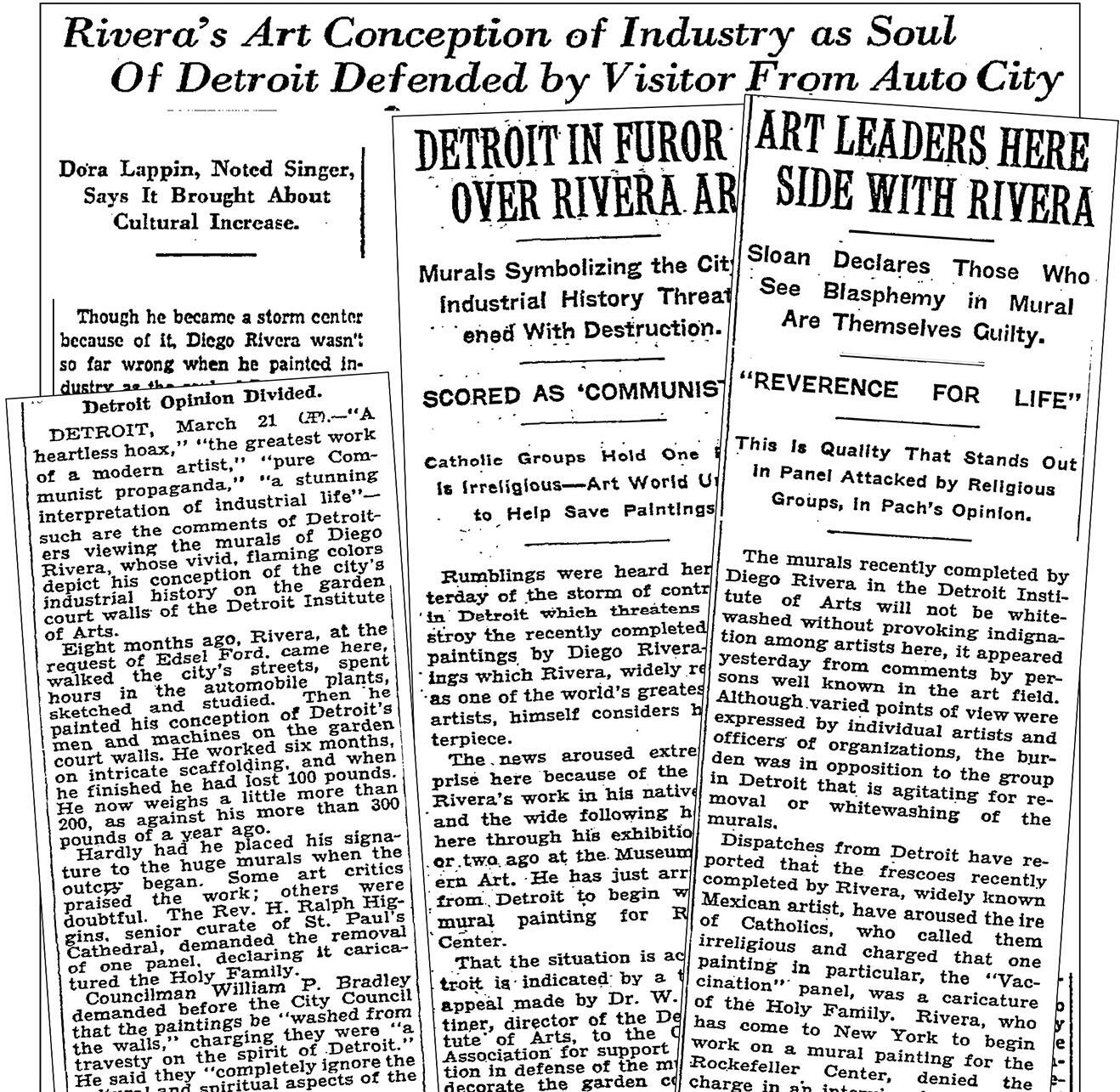 The Detroit Industry frescoes hold a powerful and special meaning for me, as they do for many who live there. I was born and raised in the city because of my grandfather’s northward journey and my father coming to work decades later at a Chrysler plant on Jefferson Avenue. I was 10 or 11 when my father first brought me to the DIA.

The museum is an imposing white marble building done in a Beau Arts style and sitting on Woodward Avenue, Detroit’s broad central thoroughfare that seemed like the main street for the whole world. Walking first through a gallery filled with gleaming medieval armor, you enter the Garden Court, and from floor to ceiling on all four walls, you are enveloped by the frescoes.

I was struck immediately by the color, the form, the sense of movement, the cacophony of images, and the figures of workers packed together in intense, demanding operations. I also learned for the first time what my grandfather did every workday on the job. All this was surrounded by other images that I didn’t remotely understand but had an unsettling, inspiring power, nonetheless.

While critically acclaimed over the years, some have said that Rivera portrays workers and the process in an idealized way. I disagree. “Idealized” implies that you might want to be in those foundries or on those production lines if you had other options. He portrays the dignity of the people who do the work to be sure — he was proud of that — but they are working hard, packed tight, muscles straining, feeding machines. The viewer can almost hear the noise and feel the heat.

Later, I became aware of the ways in which the influence of Rivera’s Mexico shaped the images and the ways in which great art can transcend borders. “He effectively elevated the ‘moral’ mandate of the DIA by seeking to instruct its audience about the city’s industrial base surrounding them,” Mark Rosenthal, the curator of the exhibit “Diego Rivera and Frida Kahlo in Detroit,” writes in the exhibit’s catalogue. Rivera wanted his art to provoke, challenge, inform, engage, and ultimately change the world. For all this, a canvas was far too small, mammoth spaces barely large enough. He wanted workers and a broader public to appreciate his art on the walls but had no problem with the world’s richest capitalist putting it there. For Rivera, art, like life, could be full of contradictions.

I have visited the murals countless times. The thrill of walking into the Garden Court doesn’t diminish, and I am sometimes surprised by seeing the familiar images in new ways and being engaged, challenged, and inspired by the art all over again. The murals captured the spirit of Detroit then and provide relevance and insight for the times in which we live today. We look at the dignity of work then and better appreciate that it is still with us today. The rhythm of the assembly line is still present, though its importance is diminished, and the city once again faces hard times. New York Times art critic Roberta Smith aptly summed it up when she wrote, “the ‘Detroit Industry’ frescoes are probably as close as this country gets to the ceiling of the Sistine Chapel.”

Frida Kahlo came to Detroit with Diego Rivera after marrying him three years earlier. Their relationship was both passionate and tumultuous. They inspired and provoked each other, often at the same time. “I suffered two accidents in my life,” she wrote. “One in which a streetcar knocked me down… The other accident is Diego.” Unlike him, she hated being in Detroit. The 11-month stay proved traumatic, but the experience transformed her as an artist. The exhibit is brilliant in its own right, but also adds a vital dimension to understanding and appreciating his murals as well as her extraordinary works.

Consider Kahlo’s “Self Portrait on the Borderline Between Mexico and the United States,” painted at the DIA in 1932 while Rivera was creating the murals. She stands upon a stone block in the foreground in a bright pink dress. A massive ruin of a Mexican pyramid dominates the painting to the left under a fierce Mexican sun and pensive Mexican moon; the fertility of the Mexican earth defines the foreground. Skyscrapers, industrial air ducts, and the towering stacks of a Ford factory define the right; one of her hands holds a Mexican flag towards Mexico and the other, a cigarette pointing towards the United States. “Kahlo clearly wanted to challenge Rivera’s worldview of a united Americas,” Rosenthal writes. “Her own position was that Mexico and the United States were too spiritually distinct to ever find common ground.” Nonetheless, the wires of a U.S. fan snake underground to touch the roots of a Mexican plant. 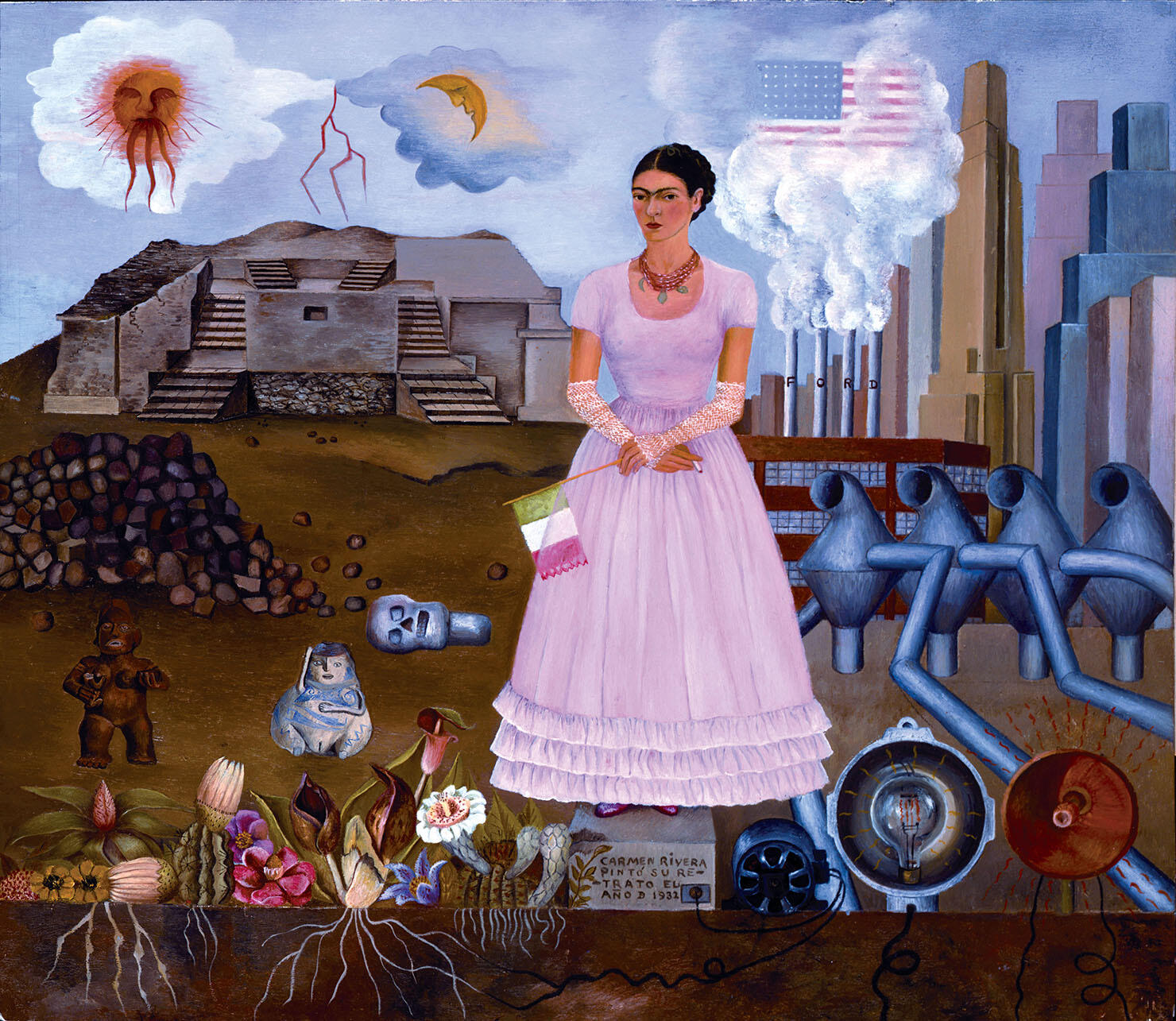 What is fascinating from today’s perspective is that the border as barrier doesn’t exist. She’s in both worlds, although the viewer senses her heart remains in Mexico. As I viewed the painting, I wondered what Kahlo might have painted were she doing a “Self-Portrait on the Borderline Between Mexico and the United States” today? Would a high wall run down the center of the painting? Would abandoned auto plants litter Detroit? Might violence be gripping Mexico? Roberta Smith captures the power of Kahlo’s art when she writes “[her] small paintings are portable altarpieces for private devotion and a high point of Surrealism that speaks to us still.”

More than eight decades have passed since the creation of Rivera and Kahlo’s art in Detroit and their display in this exhibit. The artists painted during economic times so grim that the DIA faced closure and the sale of its art in 1932; ironically, the museum once again confronted having to sell its extraordinary collection in the wake of Detroit’s bankruptcy before the opening of this exhibit in 2015. Yet, Rivera’s dream of a popular international art has found an enthusiastic new audience, and Kahlo has become iconic.

“To me there is something majestic and inspiring about those powerful hands of labor and industry Rivera has painted on the wall of the courtyard,” Dora Lappin, a noted lyric soprano told The Washington Post in 1933. “They are reaching upward toward … a day when the cultural life will be available to every person in the city.” The exhibit “Diego Rivera and Frida Kahlo in Detroit” has brought that day a step closer. It illuminates the work of two extraordinary artists and reminds us that the Detroit Institute of Art remains the soul of a great, resilient city.

Harley Shaiken is the Class of 1930 Professor of Letters and Science, Graduate School of Education, and the Department of Geography, and Chair of the Center for Latin American Studies at UC Berkeley. 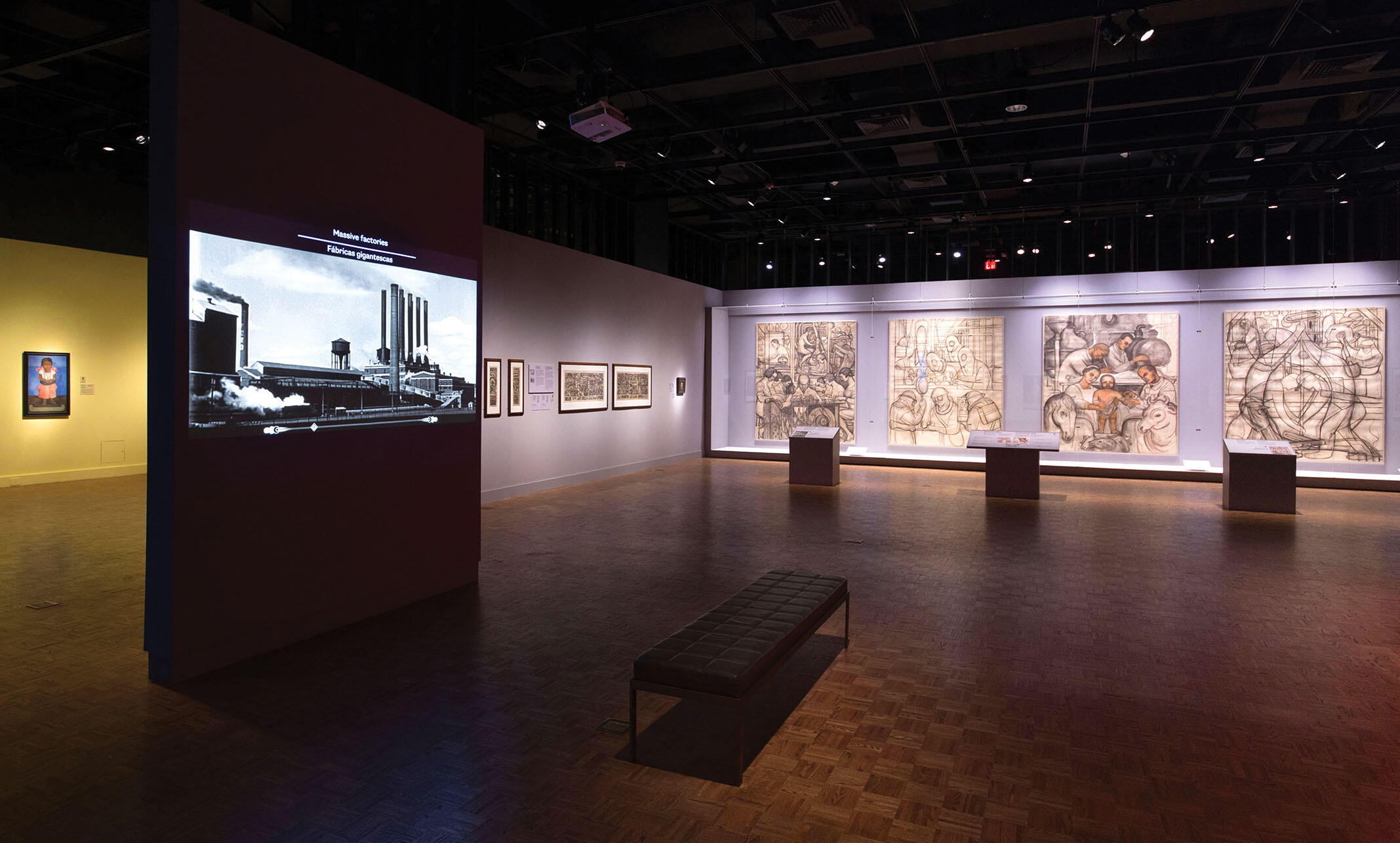