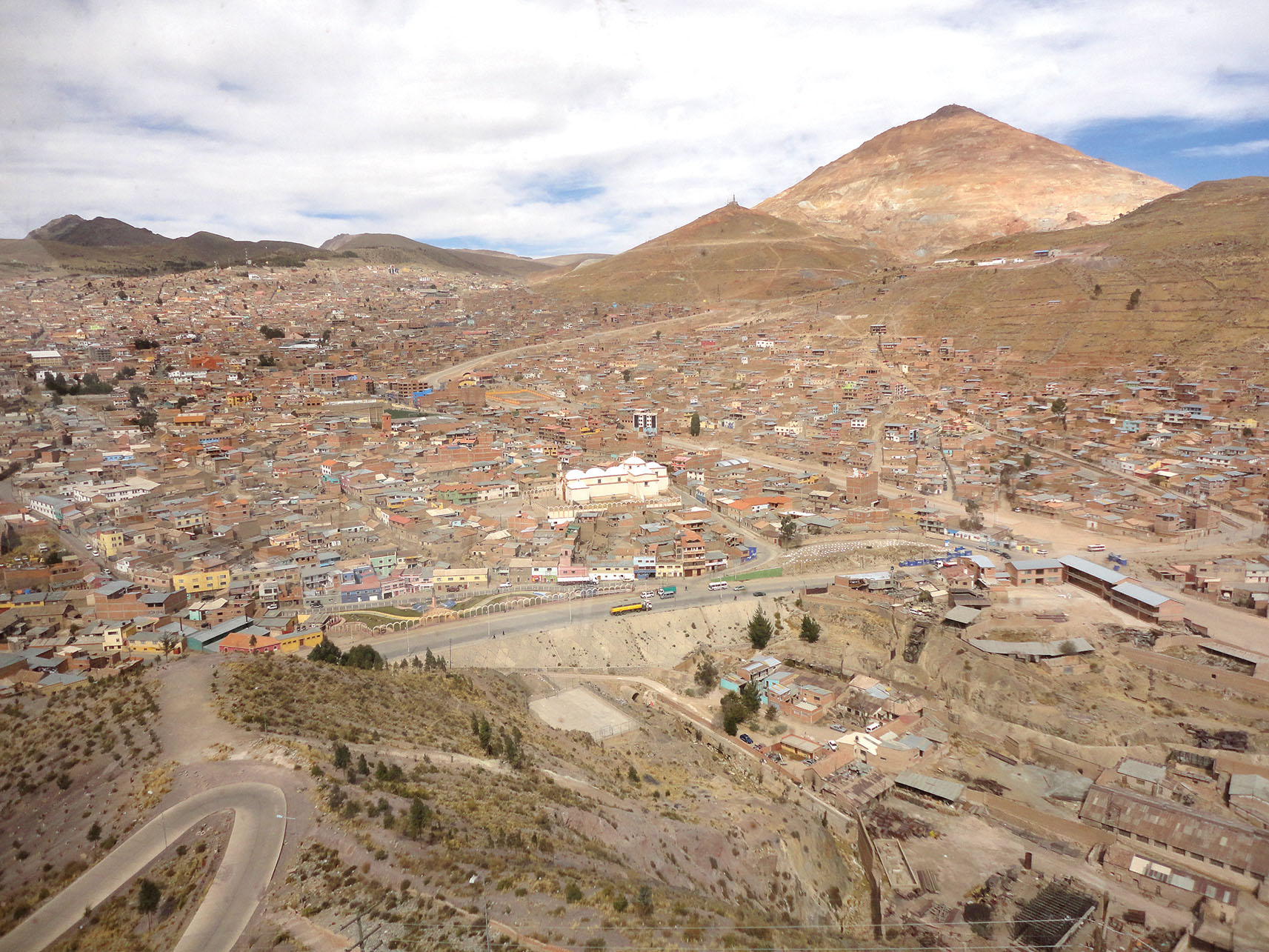 The city of Potosí, Bolivia, seems to exist against the odds. Perched at a nose-bleeding altitude of 13,000 feet, sun scorched by day and teeth-numbingly cold by night, Potosí leaves normally intrepid visitors literally breathless. It is hard to believe that in the 17th century this tawny, dusty city of 170,000 people was more populous than either London or Paris. The reason for Potosí’s early urbanization is visible from any major street in the city: a perfectly cone-shaped yellow mountain that looms up in the south. During the colonial era, the Cerro Rico — which literally translates as “Rich Mountain” — was home to the most important active silver mines in the world.

A common lament among Bolivians is that enough silver was extracted from the Cerro Rico to build a bridge between South America and Spain. Regardless of the actual quantity extracted, however, the mountain’s historical relevance is indisputable: it provided the necessary economic lubrication for the industrial revolution in Europe, while also forever changing patterns of land use and social organization in the Bolivian altiplano (highlands).

The Cerro Rico is still riddled with active mineshafts, though they are no longer operating at the same scale or under the same ownership structures that they once were. Instead, the Cerro Rico’s mines are now almost entirely operated by mining cooperatives, which are essentially groups of independent miners who extract small quantities of minerals from otherwise abandoned mineshafts. Although cooperative mining exists in a handful of countries around the world, Bolivia is unique in the degree to which the mining sector is dominated by cooperatives, both in terms of total workforce and political clout. According to 2012 data prepared by the Bolivian Ministry of Mining and Metallurgy, there are currently about 60,000 incorporated cooperativistas (cooperative members), which is five times the number of miners employed in the public and private sectors combined. These cooperatives are militantly organized, and they are very willing to take to the streets with dynamite when threatened by anti-cooperative policies. My research focuses on the role of these mining cooperatives at the nexus of contemporary and historical interactions between the Bolivian state, international capital flows, and land in the altiplano.

Mining cooperatives first emerged on the Bolivian highlands in the 1930s, when international mineral markets collapsed along with the rest of the global economy. At that time, many unemployed miners organized themselves into groups to exploit the private mines that had been shut down due to diminishing profits. Since then, each economic crisis has resulted in an increased number of cooperativistas. Historically, these cooperative members functioned as a reserve labor force for the corporate (public or private) mining sector: each time the mineral market began to boom again, there were willing laborers close at hand. With changing technology, however, private and state mining companies no longer need this labor reserve. Today, the only way for non-skilled miners to profit from rising commodity prices is by joining cooperatives.

Increasing numbers of rural residents are choosing to do just that, in part because the flexibility of cooperative membership means that agriculturalists can become miners — or agro-mineros — without abandoning their land. This relationship has been encouraged both by a series of laws passed in the last decade and by the state’s general willingness to not tax the cooperatives and to turn a blind eye to their questionable labor and environmental practices. Indeed, the cooperatives have been highly successful in blocking proposals that would require them to pay taxes, in thwarting attempts to nationalize mineral extraction, and in acquiring concessions from the state mining corporation, despite the fact that cooperative mining contributes less than 2 percent of Bolivia’s GDP. Even more importantly, they are actively involved in shaping national policies, notwithstanding the apparent contradictions between their interests and current President Evo Morales’s promise to protect Pachamama (Mother Earth) from encroaching capitalist resource extraction. In this context, my research questions are: How have the mining cooperatives come to exercise such influence in Bolivian politics, and how is their influence maintained in the contemporary era?

The day I set out to climb the mountain for the first time, I made a few stops in the city market to buy two bags of coca leaves — one to chew myself, as a remedy against altitude sickness, and one to share with miners, who chew coca to minimize the effects of hunger, thirst, and exhaustion. I then took a bus to the edge of the city and started up one of the many footpaths that zigzag up and across the mountainside. Near the entrance of each major mine is a small collection of houses for families whose job it is to guard the mine against unauthorized miners. I hadn’t climbed very far — though the altitude had already made me breathless — when a group of children from one of these mining outposts ran towards me asking if I wanted a tour of the mine. Many cooperative members make extra money by offering guided tours to foreign tourists, who will pay for the pleasure of crawling through narrow tunnels whose interior temperature reaches 100ºF and exclaiming over the extent to which working conditions have remained unchanged since the 16th century. These exclamations are well warranted: the cooperative members’ tools are hand operated, their protective gear is minimal, and their daily risk is high.

I explained to the kids that I had already been on a mine tour and that I just wanted to see the bocamina, or mine entrance. They brought me to the bocamina and introduced me to Enzo, the guard. Enzo’s wire frame glasses leant him an unexpectedly academic look that contrasted with his coveralls and rubber boots. As I sat and chatted with him, a steady stream of miners passed by on their way to work, each one stopping to share some coca leaves and ask what a gringa was doing hanging out around a mine. 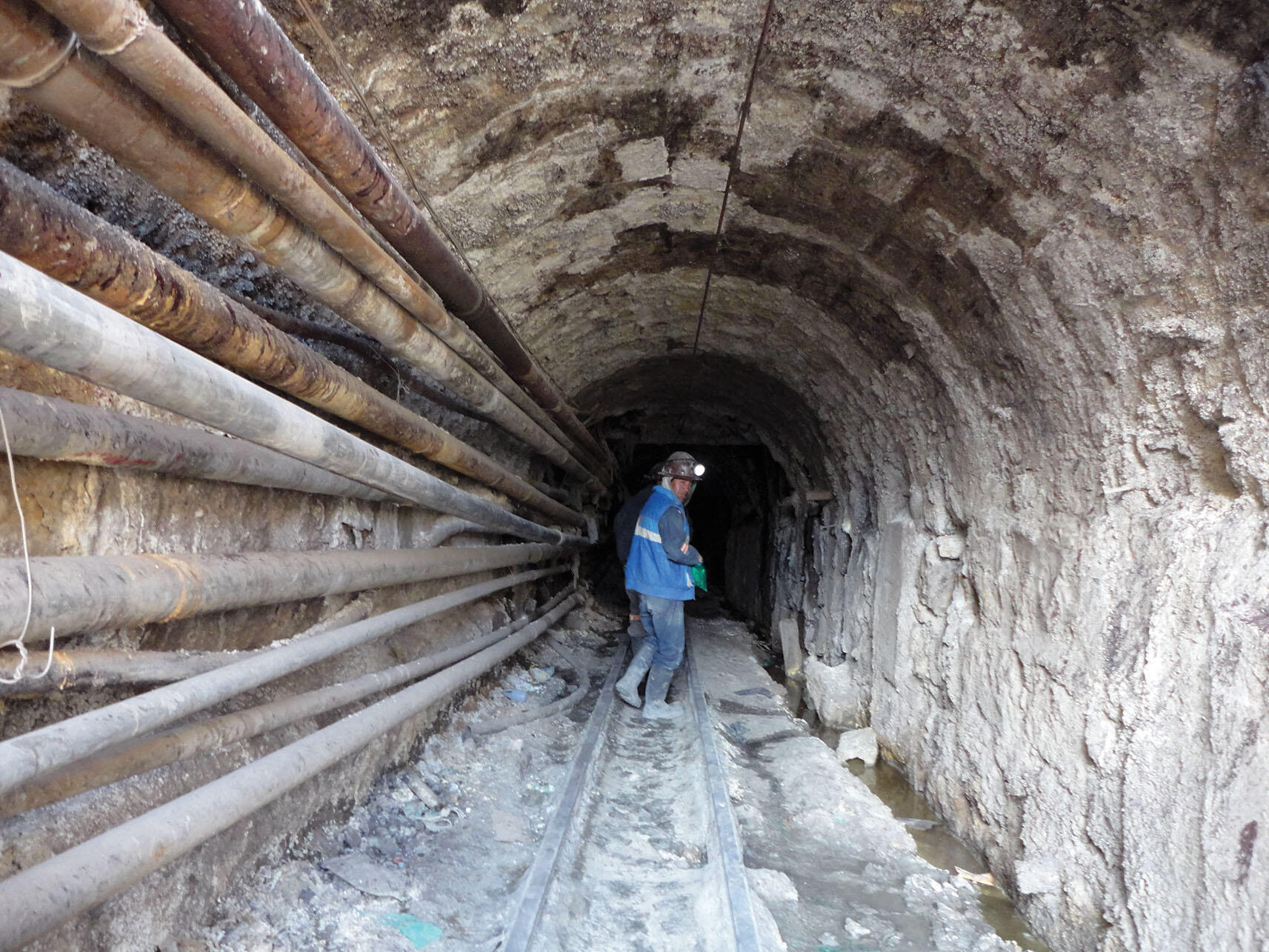 These miners were all part of the same cooperative, but they do not work cooperatively per se. Although structures and practices vary wildly, internal social differentiation is common: the cooperative’s mining concession area is divided among the socios, or official cooperative members, each of whom might hire a group of workers, or peones, to mine the region to which he has rights (it is almost always a “he,” except in cases where a widow inherits her husband’s cooperative membership). Peones do not receive the benefits of cooperative membership, which include some life insurance and the ability to participate in decision-making processes, and they are often paid only a very small percentage of the value of the minerals that they extract. Most of the workers with whom I spoke were men in their early 20s who were working as peones. Armed with bags of coca leaves, bottles of 98-percent alcohol, and several sticks of dynamite, they take tremendous risks on a daily basis to scrape together a living.

The mineshafts in which these cooperatives work officially belong to the Corporación Minera de Bolivia (Comibol), the state-owned mining company that was created as one of the primary outcomes of Bolivia’s 1952 national revolution. At the time of its inception, Comibol owned and operated nearly all the mines in Bolivia, but at present, it exists largely as an administrative entity with only a handful of fully public mines. Economic challenges at various points throughout its history forced Comibol to seek international financial support and to trim its workforce. Cooperatives became a strategic means for the company to downsize without sparking insurmountable unrest.

Archival documents show that by the late 1950s, USAID was recommending that the Bolivian state encourage the proliferation of mining cooperatives in order to relieve widespread discontent among laid-off workers. A similar but more dramatic event occurred in the mid-1980s, when falling international mineral prices, pressure from international institutions, and general economic disarray prompted the state to privatize virtually all of Comibol’s mining concessions and lay off some 20,000 miners. Many of these miners joined or formed cooperatives, which were now concentrated not only in Potosí, but also in the northern part of the department of La Paz and around the city of Oruro (the heart of Bolivian tin mining and the country’s most important economic center from the early 20th century through the 1980s). The vast majority of these cooperatives rent their concessions areas from Comibol, though some also have direct concessions from the Bolivian state.

Over the past decade, Bolivia has witnessed yet another, much less well-documented, spike in the number of cooperativistas. Responding in part to rising commodity prices, many rural residents with no previous mining experience or affiliation have started joining cooperatives. The incentives for such action spring not just from international market prices, however. Since coming to power in 2005, current President Evo Morales and his party, the Movimiento al Socialismo (MAS), have passed a significant number of political reforms that benefit the cooperatives. In the new constitution, which was approved in 2009, cooperatives are recognized as equal players in the mining sector alongside private companies and Comibol. The first Morales-appointed minister of mining and metallurgy was an ex-cooperativista who blocked several attempts to nationalize privately owned mines because nationalization would have threatened cooperative access. Bolivia is also currently in the process of rewriting its mining code, which was originally passed in 1997, during the presidency of the notorious mining magnate Gonzalo Sánchez de Lozada, and the cooperatives have been actively involved in reviewing and amending drafts of the proposed law. The most recent draft indicates ever more favorable political conditions for cooperatives: reduced royalties, indefinite contracts with Comibol, and potentially easier means for cooperatives to form direct alliances with private companies.

Given this favorable political climate, a cooperativista with a lucky corner of the mine has the opportunity to generate a surprisingly good income, and increasing numbers of campesinos and indigenous communities are willing to risk poor health and water pollution in the hopes of benefiting from the boom. Mining cooperatives are poised to play a progressively more dominant role in Bolivian economic and territorial dynamics, a situation that implies serious contradictions within the “new left” politics that Morales and the MAS purport to defend.

Andrea Marston is a Ph.D. student in the Department of Geography at UC Berkeley. She received a Tinker Grant from CLAS to travel to Bolivia in the summer of 2013. 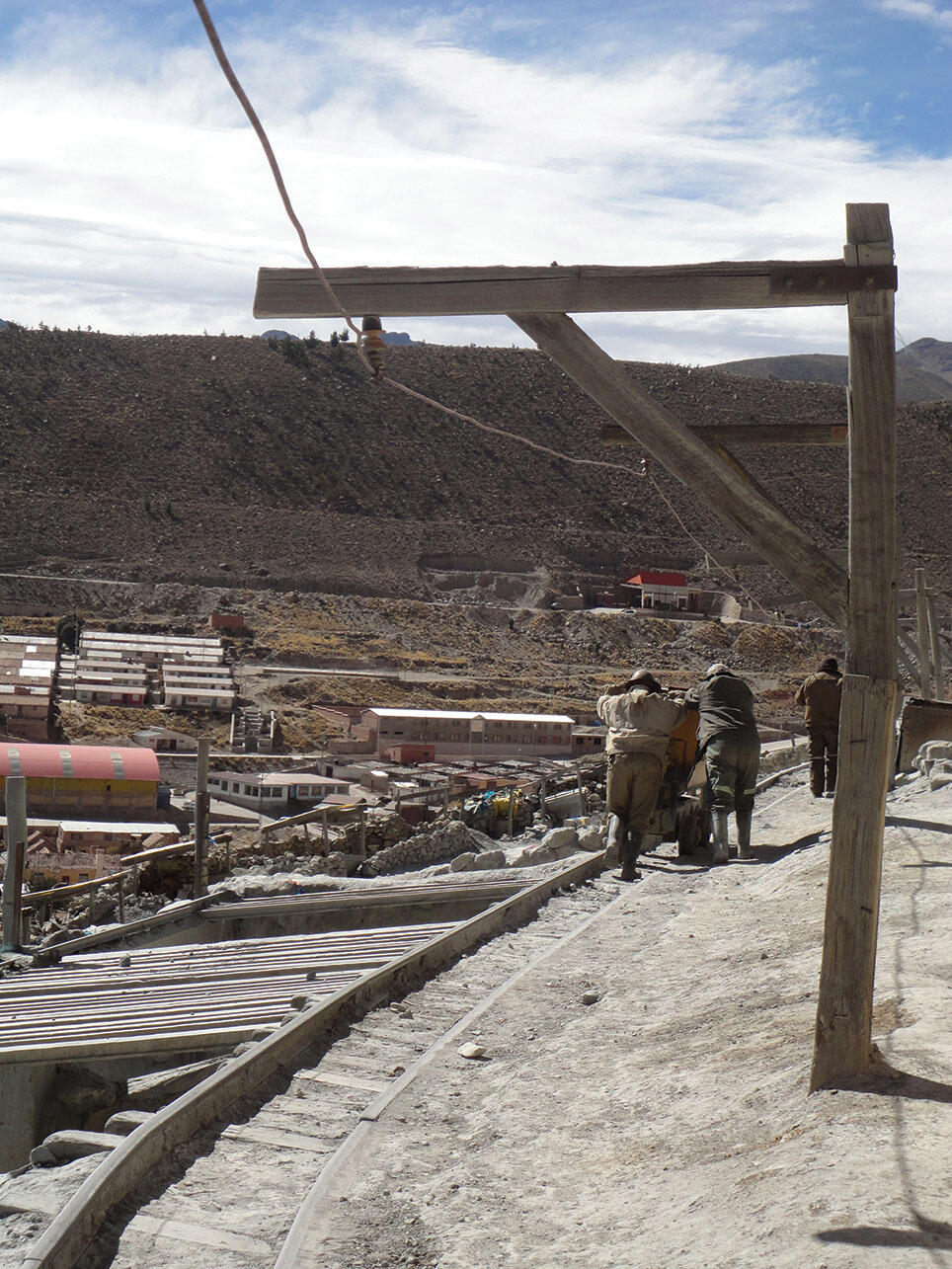