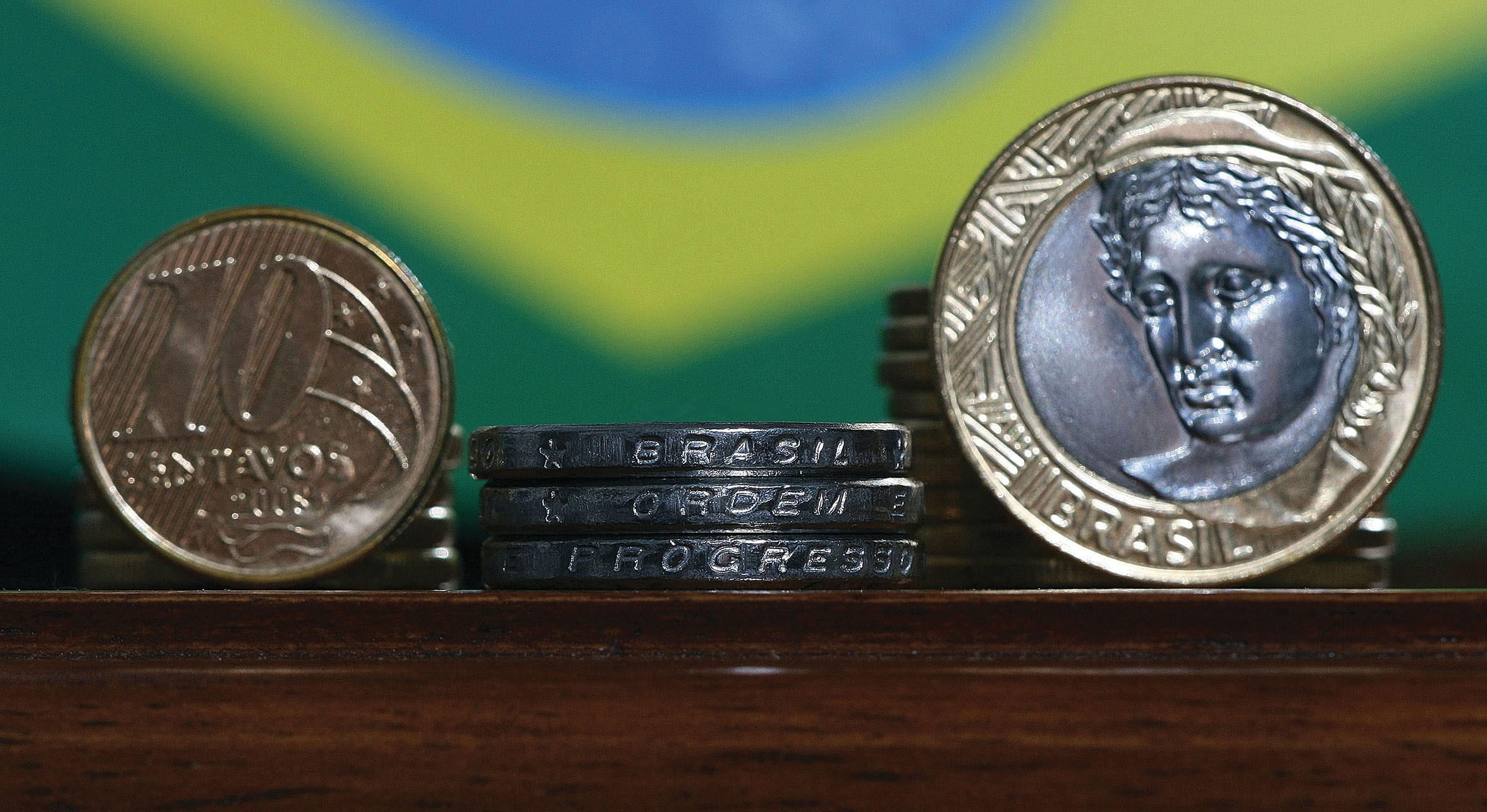 In the United States, recovery from the Great Recession began in mid-2009 and has continued for the past five years. But for many Americans, the economy still doesn’t feel strong. Despite healthy GDP growth and rising stock prices, labor market weaknesses leave many people unemployed, underemployed, or out of the labor market. Correspondingly, the income distribution has deteriorated, with economic gains going disproportionately to the top of the income distribution.

In Brazil, the situation would seem to be reversed. Economic growth, fairly weak from 2000 to 2010, turned even weaker in 2011 and shows little sign of strengthening. Despite this macroeconomic stagnation, the labor market and income distribution have made remarkable improvements. João Saboia, a professor at the Institute of Economics at the Universidade Federal do Rio de Janeiro, discussed this apparent puzzle at an event hosted by the Center for Latin American Studies.

The federal minimum wage in the U.S. is not indexed to inflation. Rather, increases in the nominal minimum wage require congressional and presidential approval and are legislated only sporadically. President Barack Obama has called for a gradual increase in the minimum wage from $7.25 to $10.10 an hour and for subsequent indexation to inflation. The White House cites the research of UC Berkeley economist David Card and coauthor Alan Krueger as evidence that raising the minimum wage would not adversely affect employment rates. Card and Krueger’s 1994 paper, “Minimum Wages and Employment: A Case Study of the Fast-Food Industry in New Jersey and Pennsylvania,” has prompted a huge number of subsequent studies on the employment effects of minimum wage laws.

Over 600 economists — including CLAS chair Harley Shaiken and 15 other Berkeley professors — have signed a letter to the president and congressional leaders in support of increasing the minimum wage. The letter notes that, “In recent years, there have been important developments in the academic literature on the effect of increases in the minimum wage on employment, with the weight of evidence now showing that increases in the minimum wage have had little or no negative effect on the employment of minimum-wage workers, even during times of weakness in the labor market.”

Indeed, in Brazil, a very large increase in the minimum wage has coexisted with a steadily falling unemployment rate. Unemployment has fallen from about 12 percent to about 5 percent in the past decade. Nor has the rising minimum wage driven jobs into the informal sector. Rather, the share of formal-sector employment has risen from 45 percent to 55 percent. 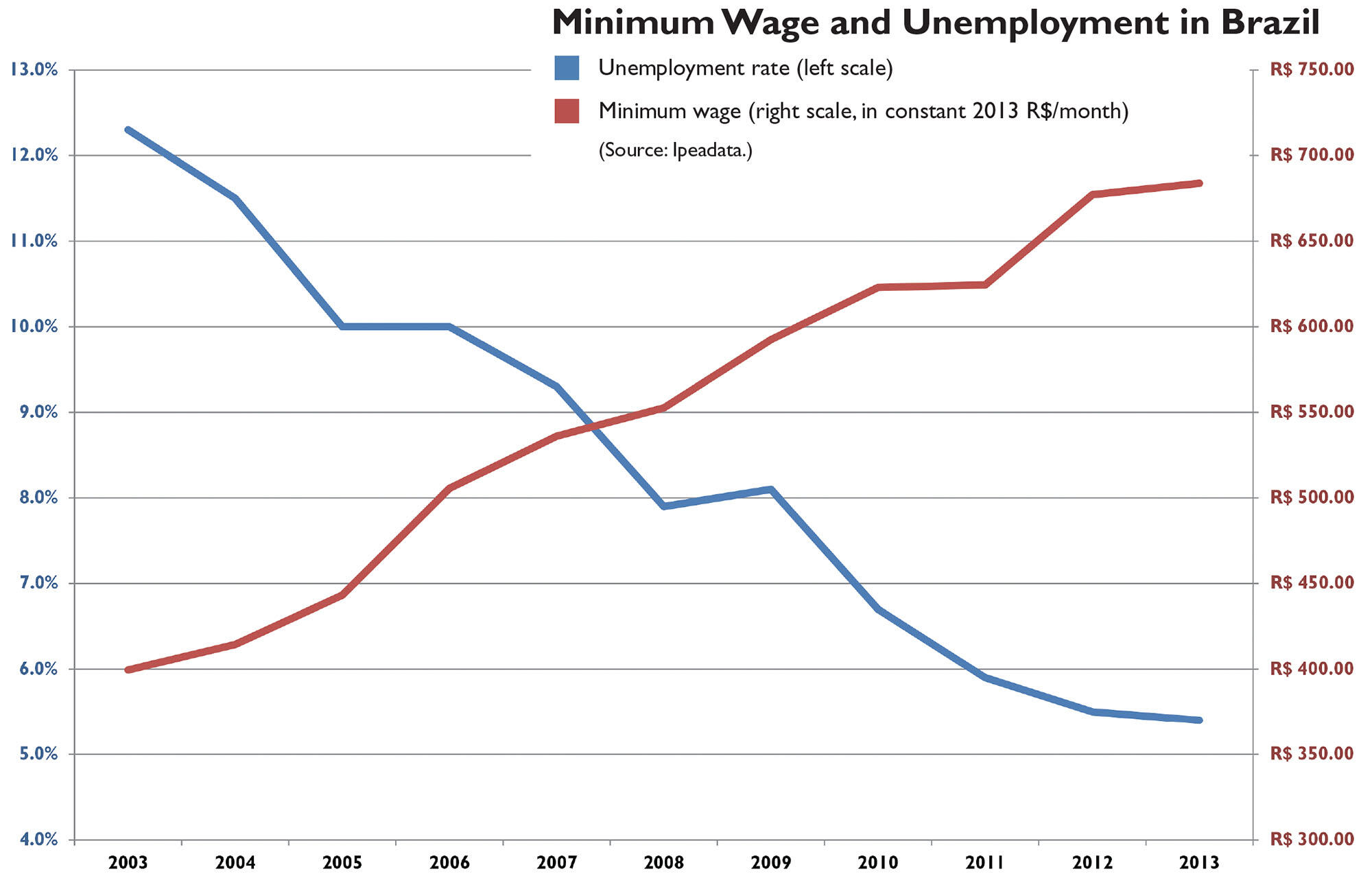 Saboia also presented plentiful evidence that Brazil’s income distribution is becoming less unequal. For example, between 2001 and 2012 the ratio of the average income of the top 10 percent to that of the bottom 40 percent fell from 23 to 15. During the same period, Brazil’s Gini index — a measure of a country’s income inequality in which values near zero indicate high equality and values near one indicate high inequality — fell from 0.6 to 0.53. While this is a remarkable improvement, it should be noted that Brazil remains the 16th most unequal country in the world according to the CIA World Factbook. For comparison, the Gini index is 0.46 in Argentina, 0.45 in the United States, and just 0.39 in Venezuela.

Saboia estimated that about 60 percent of the improvements in the income distribution can be attributed to labor market improvements. He attributed the remainder to the pension and retirement system and to Bolsa Familia, an anti-poverty program that serves about a fourth of the Brazilian population.

Expanded by President Luiz Inácio Lula da Silva, Bolsa Familia provides cash transfers to poor Brazilian families, provided they vaccinate their children and send them to school. The schooling requirement has motivated some families to take their children out of the workforce and enroll them in education. Bolsa Familia is the largest conditional cash transfer program in the world, and it is wildly popular. It also gets a good bang for the buck, costing only 0.5 percent of GDP.

Bolsa Familia is a great success story, but the progress in Brazil’s labor market and income distribution is not miraculous nor is it likely to be sustained, Saboia argued. Behind the falling unemployment rate and rising wages are some troubling signs. First, Brazil is undergoing a rapid demographic transition. The birth rate has fallen dramatically and is now lower than that of the United States. The population is aging rapidly, while the working-age share of the population is falling. This shrinking labor force helps explain why the unemployment rate has been declining, but it could also become problematic as social security benefits and other public transfers to older persons become increasingly burdensome on public finances. 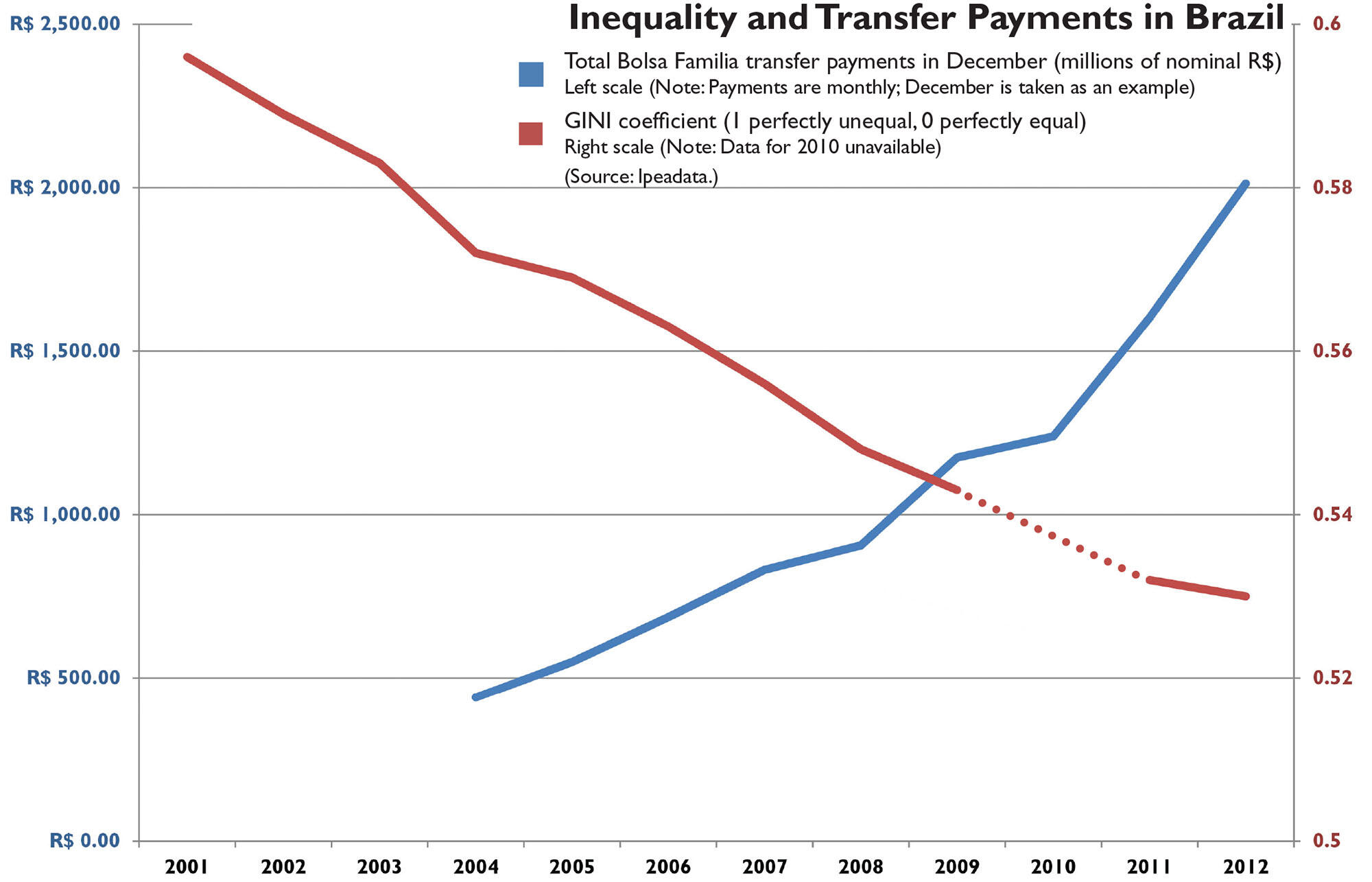 Second, nearly all new job creation is in the trade and services sectors and in jobs that pay one to two times the minimum wage. Higher paying jobs in other sectors are not being created, and in some cases, they are being destroyed. Third, and most troubling, is the stagnation of labor productivity. Labor productivity has only been growing by a very slow 1 percent per year and has actually been declining in the services sector. Real wage gains without corresponding productivity gains are unsustainable in the long run. Moreover, minimum-wage increases cannot continue to reduce inequality indefinitely in the absence of economic growth.

Earlier this year, Berkeley hosted another speaker, Thomas Piketty, an economist and the author of Capital in the Twenty-First Century. Piketty’s book analyzes the long-term evolution of inequality across 20 countries. A central thesis of his work is that when the interest rate on capital is greater than the rate of economic growth over the long term, wealth becomes more concentrated. This inequality tends to lead eventually to economic and social instability. In the case of Brazil, the rate of return is several times larger than the growth rate. Piketty’s theory therefore makes a prediction in line with that of Saboia: if the Brazilian economy doesn’t start growing or interest rates don’t fall, income inequality cannot continue improving for long.

In general, when a central bank lowers interest rates, the looser monetary conditions result in higher inflation. Expansionary monetary policy in the form of a rate cut, even if needed to boost growth, would send inflation above 6.5 percent, putting the credibility of the inflation target in danger. Given the powerfully haunting memory of Brazilian hyperinflation, which lasted from 1980 to 1994, if the central bank’s commitment to price stability loses credibility, expectations of high inflation could quickly arise and become self-fulfilling. At its most recent meeting on September 11, the central bank held its benchmark rate steady at 11 percent for the third meeting in a row.

With no simple monetary policy solution to Brazil’s economic challenges, long-run improvements in both the level and distribution of income will require more fundamental progress and reforms. In particular, given Brazil’s relatively small export share, improving global competitiveness and connectivity seems an important policy goal. Improvements in communications systems and Internet access could boost productivity by facilitating innovation. Saboia did not speculate as to what policy reforms are likely in the next few years but called for an improvement in the quality of public and private education.

It is a helpful and hopeful lesson for other countries that anti-poverty programs and minimum-wage increases can have large distributional benefits. But these benefits reach a limit in the face of continued macroeconomic weakness. Thus, Saboia’s talk left us with signs of progress but a general sense of pessimism about the prospects for the Brazilian economy.

João Saboia is a professor at the Institute of Economics at the Universidade Federal do Rio de Janeiro. He spoke for CLAS on September 10, 2014.

Carola Binder is a Ph.D. candidate in the Department of Economics at UC Berkeley. 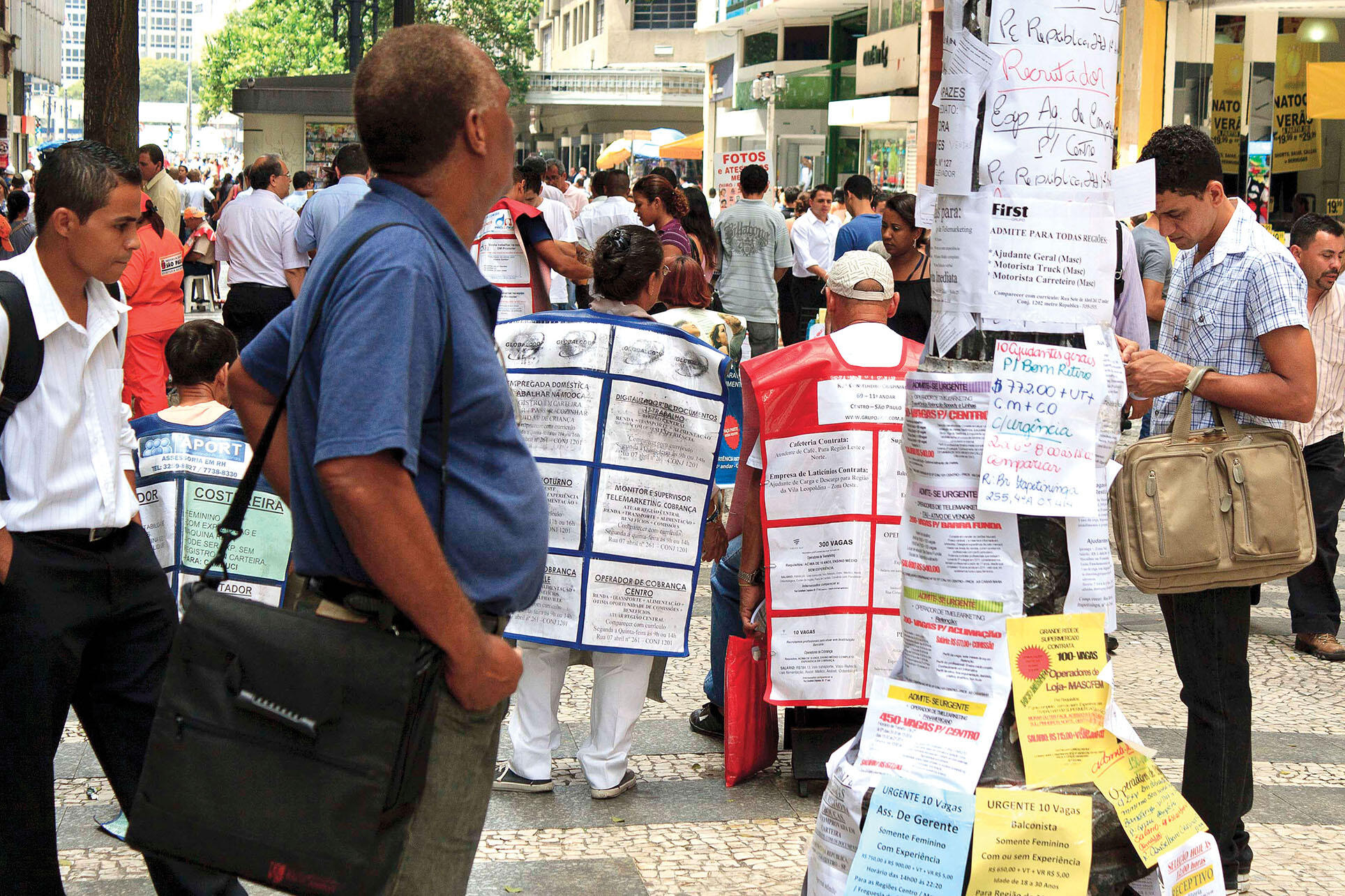