CHILE: Botero and the Museum of Memory 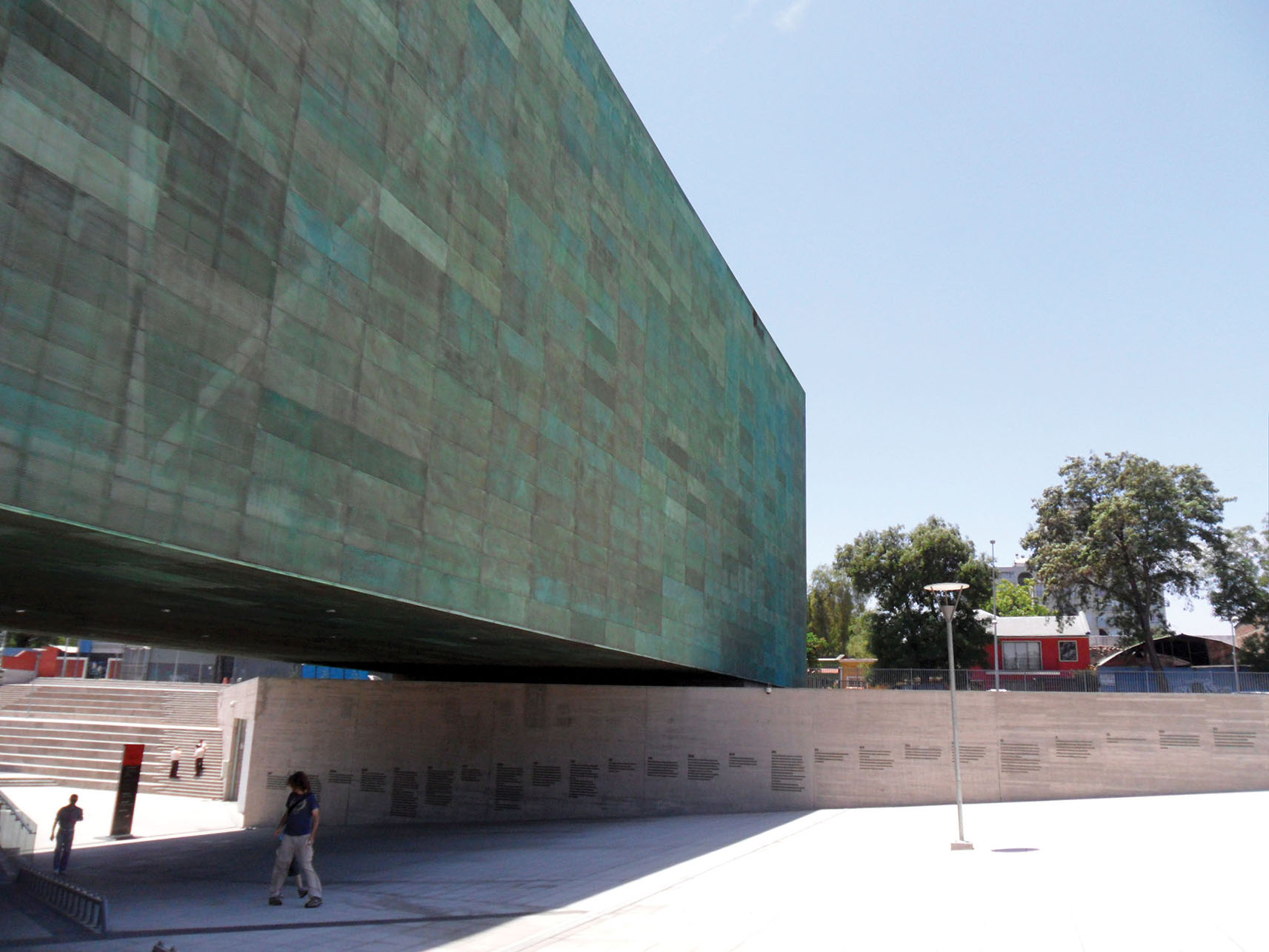 The Museo de la Memoria y los Derechos Humanos (Museum of Memory and Human Rights) is a striking, contemporary building on the edge of downtown Santiago, Chile. Its simple rectangular form — glass, steel, and concrete sheathed in green metallic mesh — seems to hover over a sunken, open-air plaza that spans a city block.

As you approach the museum, walking down the gentle slope toward what is appropriately called “Memory Plaza,” you pass alongside the 30 articles of the United Nation’s Universal Declaration of Human Rights, engraved article-by-article on a concrete wall. Article 5 states that “no one shall be subjected to torture or to cruel, inhuman, or degrading treatment or punishment.” The declaration frames the building as you arrive and confronts you again when you leave. The museum, located in Santiago’s gritty Barrio Yungay, is embedded in the cacophonous city but, with its compelling architecture, open spaces, and flowing water, encourages reflection. While very different in form and function, it has the haunting quality of the “Vietnam War Memorial” in Washington, D.C.

Upon entering the building, you are met with the words of President Michelle Bachelet, who inaugurated the museum in the final months of her presidency. “We cannot change our past, we can only learn from what we have lived. This is our opportunity and our challenge.” These words define the mission of the Museo de la Memoria: it was created to focus attention on the human rights horrors of Chile’s recent past and, thereby, to help ensure a democratic future.

The museum, which details the trauma of Chile’s bloody 1973 coup and the 17-year dictatorship that followed, proved to be an exceptional place to display 38 of the paintings and drawings from Fernando Botero’s Abu Ghraib collection on their first showing in South America. The exhibit, on loan from the University of California, Berkeley, opened on March 15, 2012 for a three-month run.

“The theme of human rights is universal,” commented the museum’s director, Ricardo Brodsky, in an interview about the exhibition with La Tercera, a major Chilean newspaper. “Through art, we can touch these same themes in a more open, modern, and rich way.”

Art proved to be a powerful window on critical issues: torture and institutions; the rule of law and democracy; and memory and human rights. Botero has said that great art is meant to provoke, and these works do just that. They draw you into their world and force you to confront your own. In the process, they touch the soul and engage the mind. The art raises critical questions: What circumstances led to these horrific events? What toll does torture extract on a democracy? How can human rights abuses be prevented in the future? 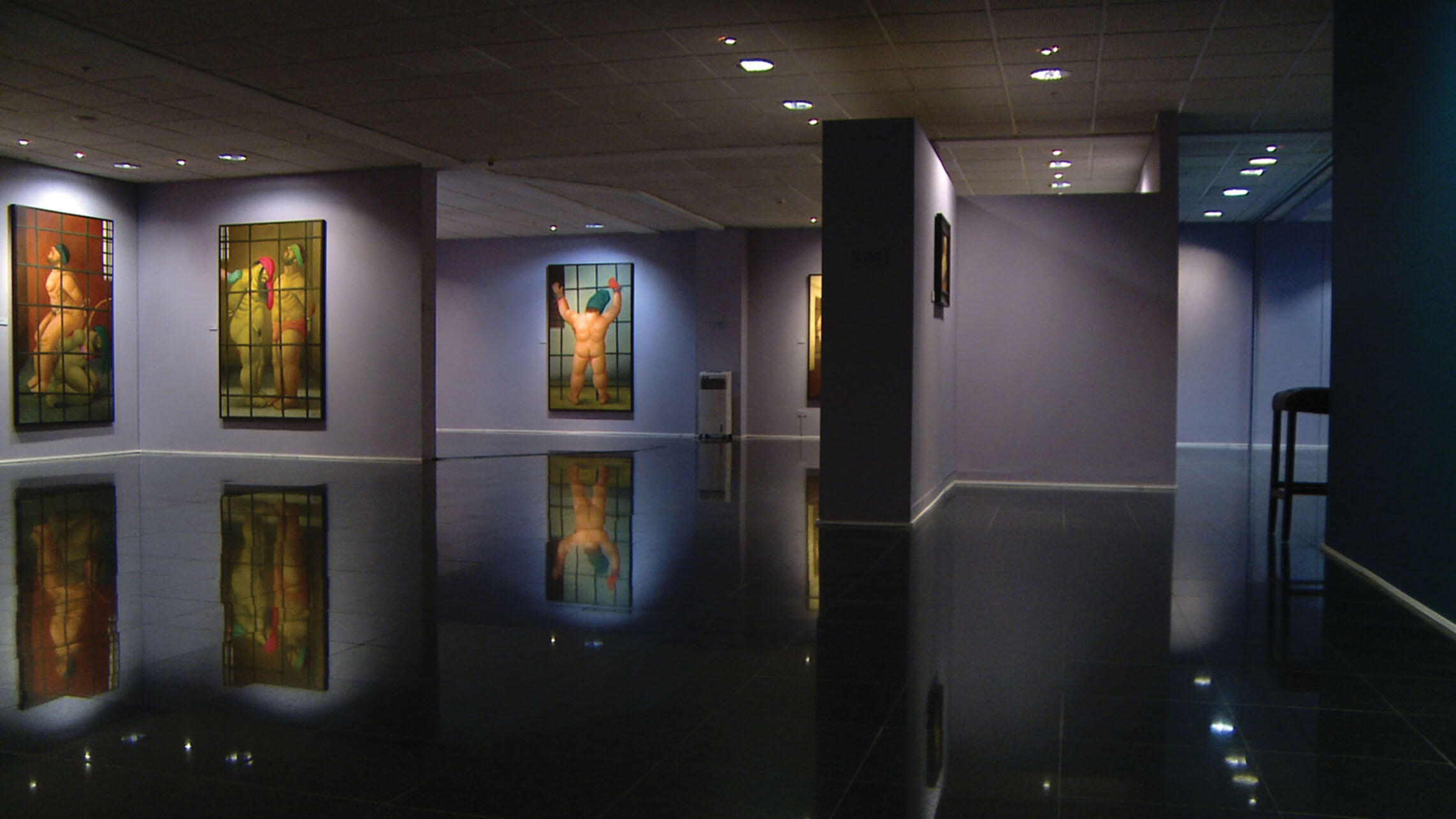 Botero is arguably the world’s best-known living artist, and he is particularly iconic in Latin America. David Ebony, the managing editor of Art in America magazine and a noted critic, called him “one of the world’s most significant artists,” noting that “Botero has managed to be profound and popular at the same time — not an easy feat.” Speaking at the presentation of the International Sculpture Center’s Lifetime Achieve-ment Award to Botero in late October 2012, Ebony called him “one of the most courageous artists of our time,” recalling “as the stories and images of the atrocities and abuse of prisoners at the Abu Graib facility near Baghdad first came to light in 2004, I was stunned that most contemporary artists remained silent on the subject.”

Botero broke that silence with his graphic, brilliantly executed paintings and drawings about what took place. He spent 14 intense months creating this series, which Roberta Smith, The New York Times art critic, called “among Mr. Botero’s best work, and in an art world where responses to the Iraq war have been scarce — literal or obscure — they stand out.”

How did Berkeley become involved? After Botero completed the series, it was shown at prestigious museums across Europe to strong reviews. Museums and galleries throughout the United States, however, passed on exhibiting the works. The Center for Latin American Studies organized the first showing at a U.S. public institution in January 2007 on the Berkeley campus, leading Botero to donate 60 paintings and drawings — virtually the entire Abu Ghraib collection — to UC Berkeley.

At the opening in Chile, visitors who had lost loved ones during the dictatorship or who themselves had been horrifically tortured were visibly moved by the art. Among them was Carolina Toha, who has since been elected mayor of Santiago. Her father, Salvador Allende’s vice president, was arrested, tortured, and murdered in the aftermath of the coup. A new generation was also in attendance. Young people, many of whom were born after the return to democracy, were also deeply impacted by the art.

The combination of great art, an iconic artist, and a new, path-breaking museum sparked intense interest and discussion throughout Chile as well as elsewhere in the Americas. It provoked a flurry of major media articles, radio discussions, television segments, tweets, and blog posts. The exhibit became a must-see event and sparked a national discussion on human rights, torture, and democratic values. President Piñera visited the museum for the first time to see the exhibit.

At a small dinner held the evening before the opening, a Chilean professor mused about the major impact the exhibit was already having. All the excitement and attention stemmed from the fact that “it’s not about Chile,” he said, “but it is.” The art universalizes torture. Chileans and Latin Americans were horrified at what happened at Abu Ghraib, he reflected, and the fact the U.S. was involved made it all the easier to critique. Once the discussion about torture starts, however, it leads inexorably closer to home.

In a program at the museum the day after the opening, José Zalaquett, a professor of Law at the Universidad de Chile and co-director of its Human Rights Center, placed the discussion in historical context by describing art’s shifting representation of torture and war. He displayed slides of artworks from the Middle Ages that displayed gruesome images bearing a striking resemblance to the Abu Ghraib works, and he presented photos of contemporary horrors around the world. Eduardo Vio Grossi, a judge on the Inter-American Court of Human Rights, laid out a contemporary vision of the continued relevance of these issues in Latin America. Christopher Edley, dean of the Berkeley Law School, examined torture and the rule of law. Edley, who played a key role in bringing the art to Berkeley in the first place, has displayed four of the largest and most riveting paintings at the law school. They sit just outside the dean’s office in a major corridor between that office and the law library.

“Art offers the possibility of serving a need that law has failed to serve,” he said during the museum program in Santiago. “How can we be sure that we will continue to debate what is right and what is wrong? I believe that the answer lies, in part, in art. That is what Señor Botero has done for us.”

Harley Shaiken is the Class of 1930 Professor of Letters and Science and chair of the Center for Latin American Studies. He is a faculty member in the Graduate School of Education and the Department of Geography. 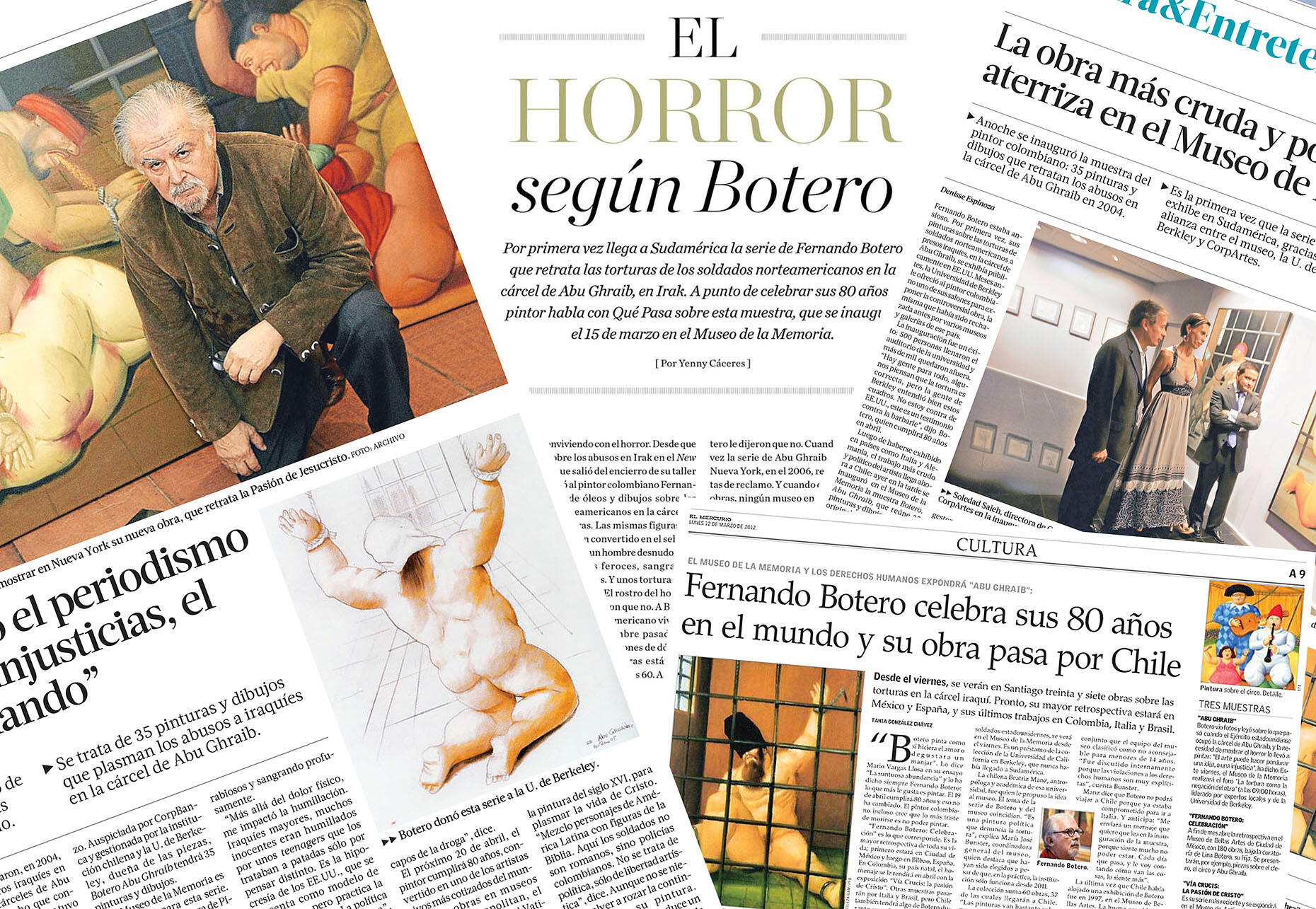 From the Berkeley Review of Latin American Studies, Fall 2012