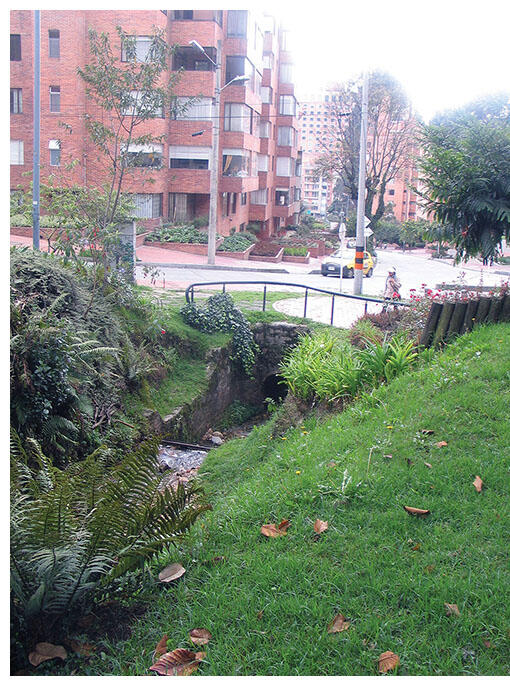 Settled between the agriculturally fertile savannah and the foothills of the Cerros Orientales and within walking distance of important resources, Bogotá’s exceptional location was paradoxically also its undoing; for 450 years, citizens used the trees of the Cerros Orientales for energy and construction, eroding the hillsides and polluting the rivers, wetlands, and lagoons. Environmental and social problems increased as the city expanded, and by the early 1990s, the Colombian capital had gained a reputation for being hopelessly polluted, chaotic, and crime ridden.

Bogotá’s turnaround began with the 1992 imprisonment of Mayor Juan Martín Caicedo on corruption charges, an event that triggered the reform of the mayoral selection process. While mayors had previously been presidential appointees, from 1992 onward they have been democratically elected. The democratic process allowed leaders to emerge who were able to transform one of the world’s most dangerous, violent, environmentally contaminated, and corrupt capitals into a relatively peaceful city.

Instrumental in enabling the makeover was the approval and adoption of the 1993 Estatuto Orgánico de Bogotá, a city by-law that insured citizen participation in government and a more effective and efficient expenditure of public funds. The imposition of a general property sales tax and a levy on the price of gasoline allowed Mayor Jaime Castro (1992-95) to lay the fiscal foundation for subsequent mayors. His successors, Antanas Mockus and Enrique Peñalosa (1995-97 and 1998-2001 respectively), invested those funds in an ambitious city improvement program. Among their initiatives were policies that aimed to enhance public squares and streetscapes, recover dilapidated parks, provide market areas for street vendors, and install bollards to prevent illegal parking. The program’s best-known achievement was the establishment of the TransMilenio transportation system, which used fixed routes and exclusive lanes for buses. Modeled on a system to ease congestion first established in the Brazilian city of Curitiba, the Transmilenio also featured a new network of pedestrian overpasses, sidewalks, and bikeways. Understanding that modifications to the physical structure of the city had to be accompanied by a change in civic attitude, Antanas Mockus introduced a program of symbolic, ingenious, and thought-provoking street representations and cultural events aimed at promoting mutual respect and reflection on the importance of improving everyday civic behavior. Unpopular measures such as the restriction of arms possession among civilians through anti-gun campaigns were also carried out.

Another important tool in the reform of Bogotá was the Plan de Ordenamiento Territorial (Territorial Reorganization Plan, POT). This set of legislation and planning policies was introduced in 1997 to regulate land-use, the right to property, environmental protection, and any physical intervention in the larger territory. The POT allowed the Peñalosa administration to institute its de-marginalization project, which aimed to install infrastructure and provide social services in poor neighborhoods by building hospitals, public libraries, and schools as well as by legalizing settlements and resettling families living in areas of high physical risk. 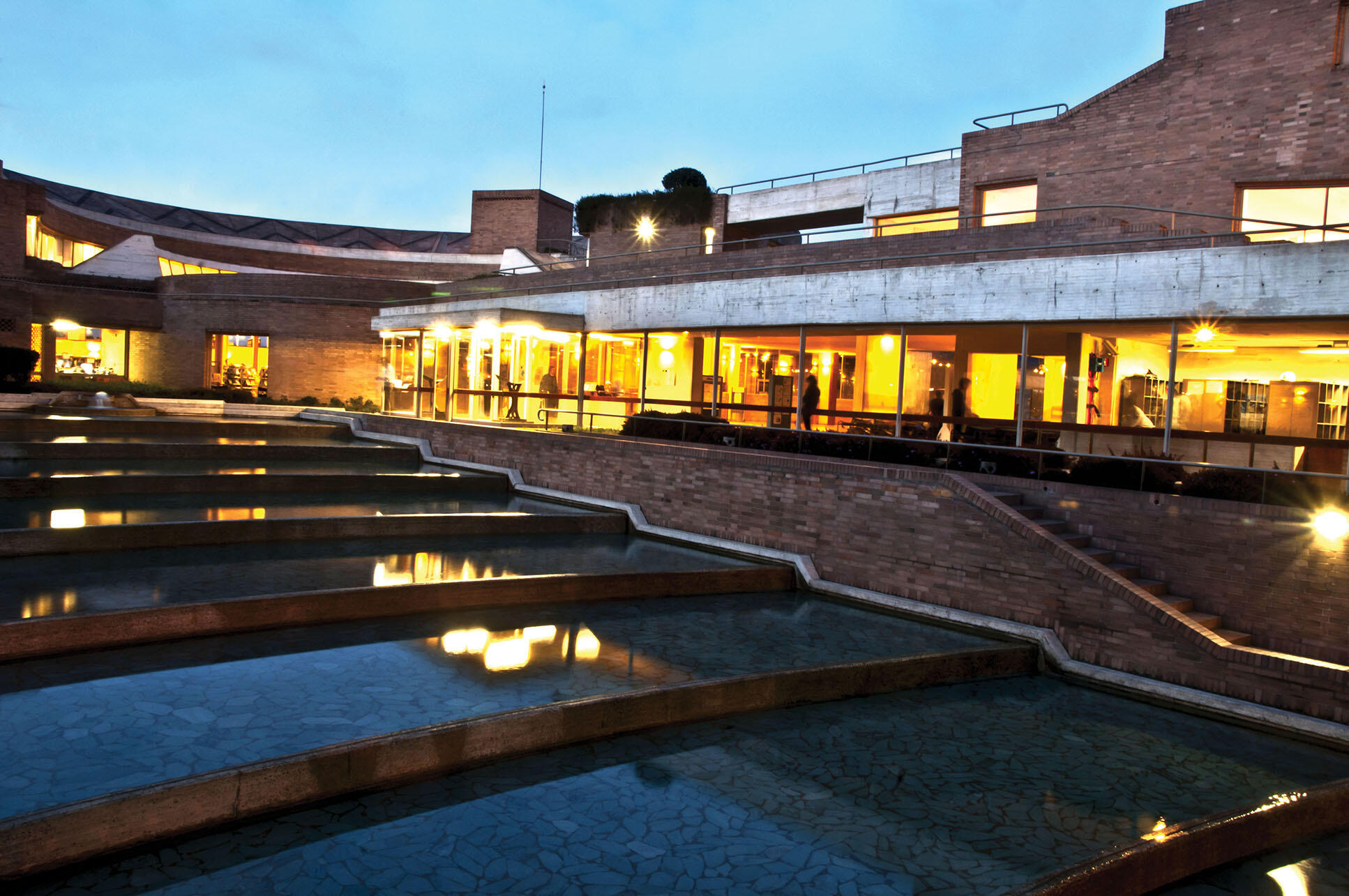 The most remarkable of the four libraries built as part of Peñalosa’s program was the centrally situated Virgilio Barco Library designed by architect Rogelio Salmona, Colombia’s best-known modernist architect. Built of brick and reinforced concrete, the library recalls traditional Moorish buildings, with a sequence of spatial events such as courtyards with water features and decks connected through ramps and stairs that begin in the park and culminate in a rooftop deck.
Rogelio Salmona’s passion for promenades and water reemerges in his design for the Eje Ambiental de la Avenida de Jiménez de Quesada (Jiménez de Quesada Environmental Axis). Conceived in collaboration with Luis Kopec and built between 1997 and 2001, this intervention transformed the street originally built over the San Francisco River into a brick-paved promenade featuring native trees, ribbon-like water fountains running along the sloping course, and a lane for the Transmilenio. The effect was to create a friendly relationship between public transport and pedestrian traffic while revitalizing the public spaces along the route. Since the San Francisco River continues to be piped underground, the Eje celebrates the memory of the river but serves no ecological function other than to mark the re-emergence of water as a fundamental part of the city’s identity. 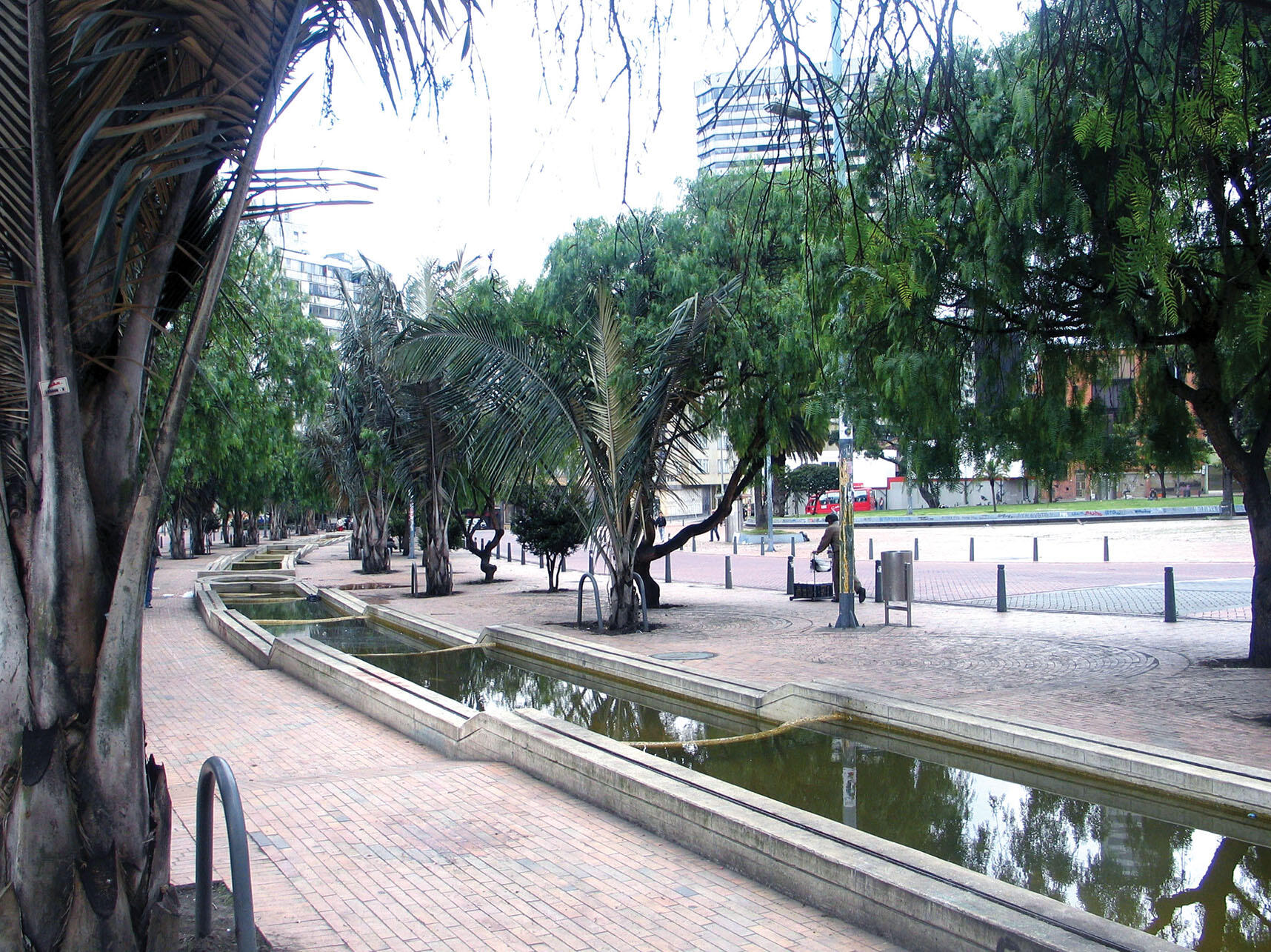 The Eje, together with the Parque del Tercer Milenio (Third Millenium Park), re-ignited downtown investment. The latter features sound and wind barriers built from the site’s construction debris and planted with groundcover and flowering vines to create an artificial valley that provides a protective, secluded space for local birds and city-dwellers seeking a refuge from chaotic urban life. Some critics have argued, however, that the development made life more chaotic for the roughly 12,000 people relocated to make room for the nearly 50-acre park.

While the destruction of slum housing for the Parque del Tercer Milenio remains controversial, the ecological objectives achieved through the reforestation of the Cerros Orientales and the restoration of the 233-hectare Humedal Juan Amarillo (Juan Amarillo Wetlands) were unquestionably positive. Wetlands play an important role in the water cycle; they help mitigate flooding and provide a rich habitat for flora and fauna. However, prior to the restoration project, informal housing in Bogotá’s eastern region had reduced the size and degraded the condition of the wetlands, threatening water supplies and natural habitat

Restoration efforts included the construction of islands for nesting birds and the restitution of the original flora of the region as well as a new plaza and walkways and cycling paths around the lake.

The public spaces around the Humedal Juan Amarillo are part of a new network of pedestrian and bicycle paths known as alamedas. Traditionally the designation for a public walkway or promenade shaded with poplar trees, the new alamedas were conceived during Mayor Peñalosa’s term and were meant to provide clean, affordable transportation by encouraging pedestrian and bicycle traffic. Arguing that people need to walk, not just to be healthy but also to be happy, just as fish need to swim and birds need to fly, Peñalosa envisaged a city in which green space would be accessible to all, not just those who could afford to belong to private clubs. 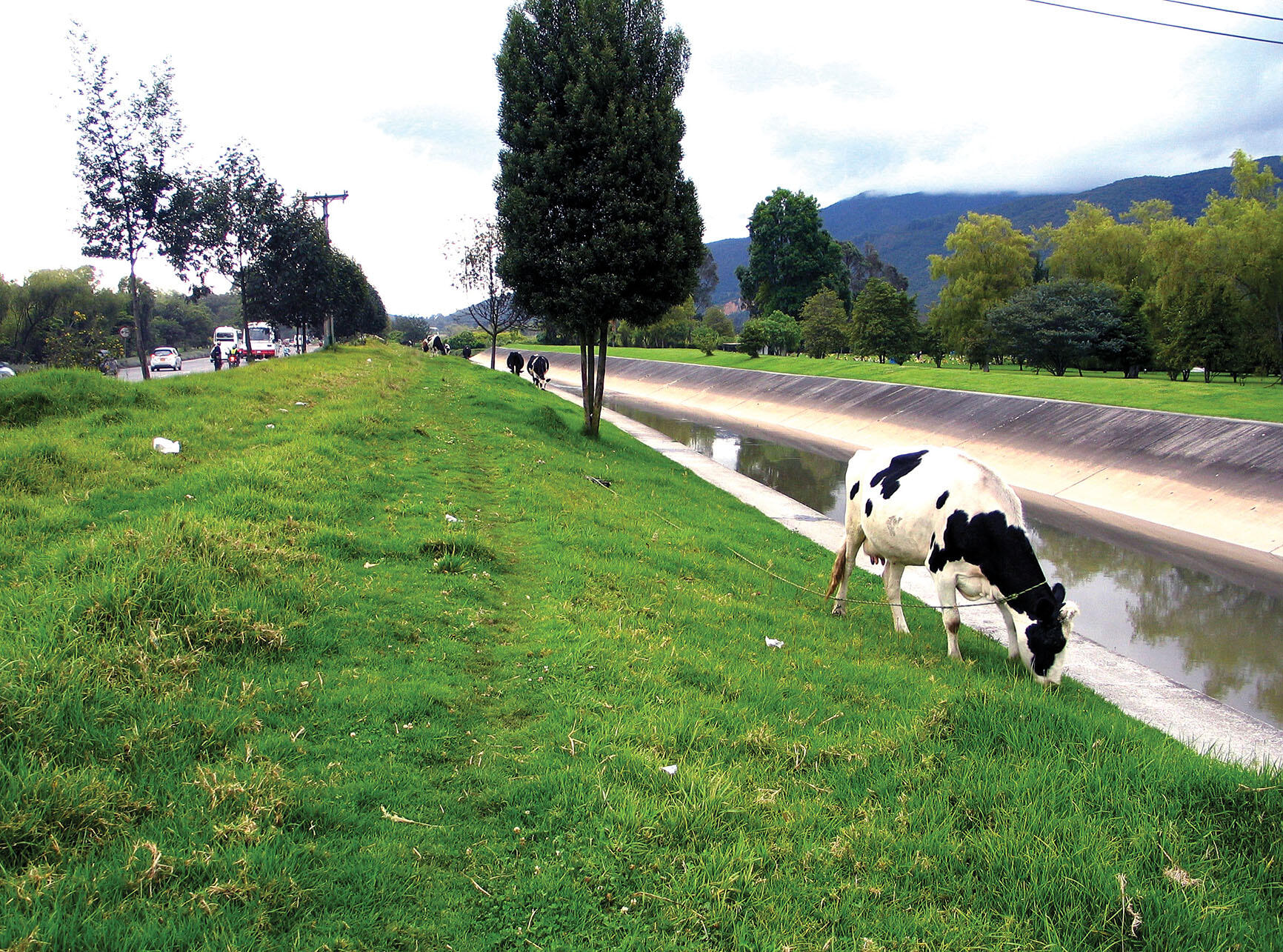 The network was conceived by the Taller del Espacio Público (Public Space Workshop) of the District Planning Commission under the supervision of architect Lorenzo Castro Jaramillo. The first of these boulevards, the Alameda del Porvenir, was constructed in the late 1990s, in an outlying, low-income area located in the city’s southwest. The 17-km-long path features a median of palm trees separating pedestrian from cyclist lanes and connects the neighborhoods it crosses with schools, libraries, community facilities, and transportation. Designed by Felipe Gonzáles Pacheco, the character of the Alameda del Porvenir changes dramatically as it passes through different districts, which include open fields and the Humedal Tibanica.

The intersection of the alamedas and the wetlands in the rapidly urbanizing areas of Bogotá’s savannah created a series of connected public green spaces reminiscent of Boston’s Emerald Necklace, which was designed by the American architect Frederick Law Olmstead at the end of the 19th century. Both projects aimed to preserve nature in vast stretches of their respective cities and to clean up polluted tidal creeks and swamps. In Peñalosa’s view, there are very few public spaces left on the planet because most of the land has been privatized. For him, public spaces are the minimum a democratic society should provide to compensate for social inequalities. Both the alamedas and Boston’s Emerald Necklace were conceived with the objective of providing access to green spaces for everyone and preserving them for future generations. Unfortunately, this aim is currently threatened in Colombia, as the Alameda del Porvenir has been the victim of vandalism and poor maintenance. 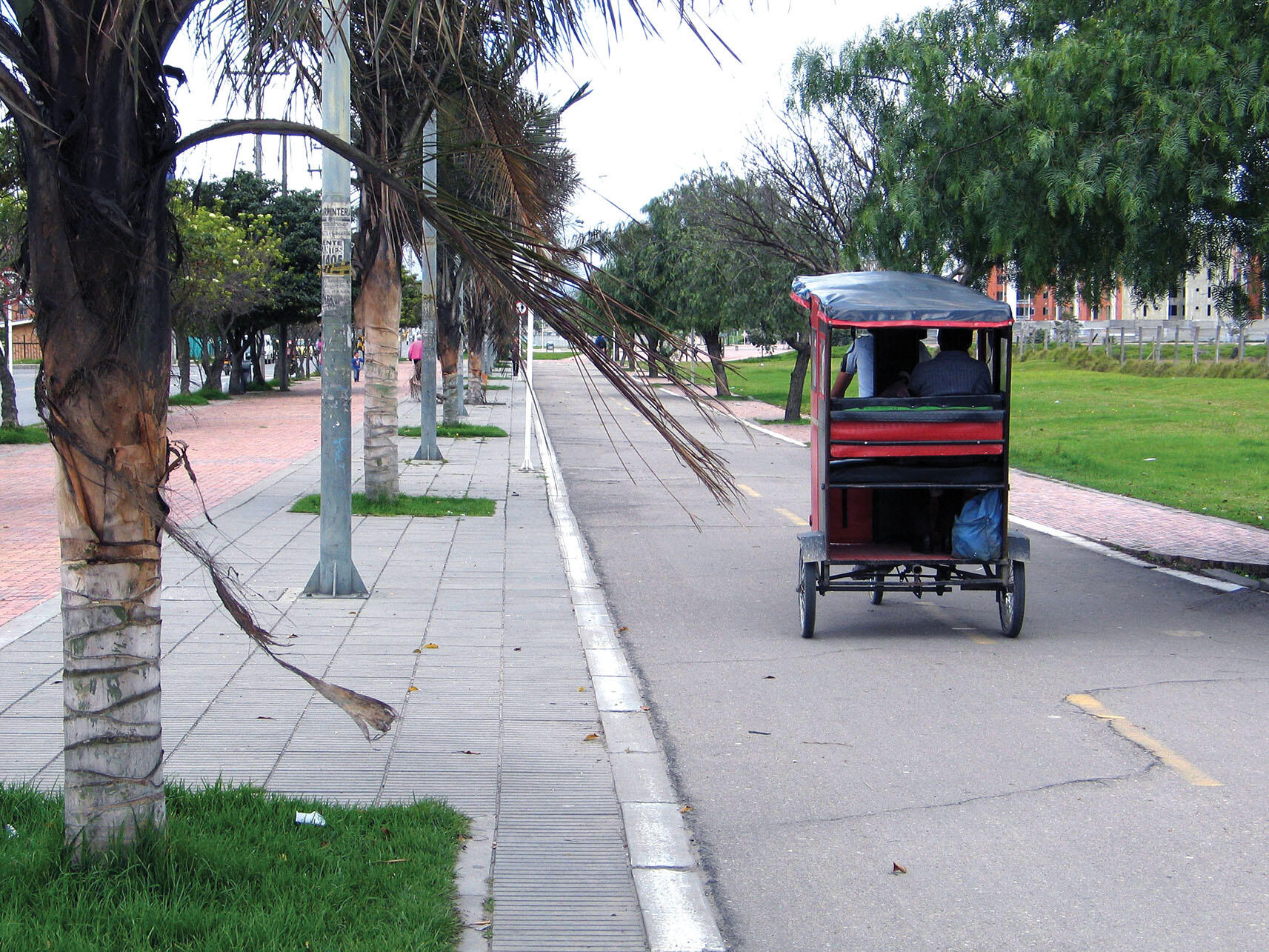 By contrast, the Parque del Virrey, the Canal de Torca, and the Alameda de la Quebrada de la Vieja — all alamedas designed around streams located in Bogotá’s up-scale areas north of downtown — are well maintained. Used until the late 1980s to carry waste into lagoons and wetlands, and ultimately to the Bogotá River, these creeks contaminated an extensive area of the city before the waste was diverted. While the water has been cleaned up, the Canal del Virrey and the Canal de Torca still run through concrete culverts that do not provide a habitat for plants to grow and wildlife to thrive. The culverts also accelerate water flow, which prevents moisture from percolating down to the water table and increases the danger of flooding. The Quebrada de la Vieja Creek, by contrast, includes a stretch that runs through a natural canyon. However, it runs above ground for only a short distance before it is diverted into an underground culvert. 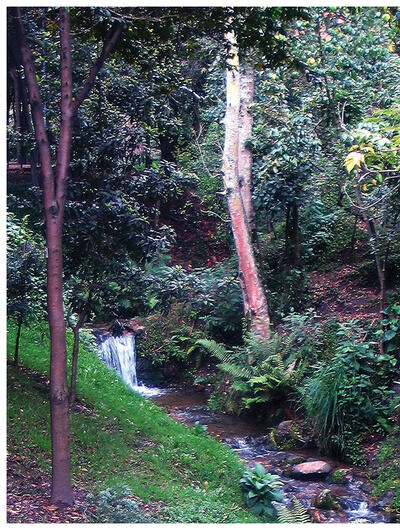 Thus, the ecological functions of the alamedas are not as comprehensive as they might have been. In addition, critics have questioned their usefulness for reaching jobs that are often located at distances that make biking to work impractical. Detractors argue that the alamedas have served to expand low-rise sprawl in southwest Bogotá and the periphery, further damaging the savannah’s ecosystem. In their view, building denser housing in the existing, deteriorated parts of Central Bogotá would have been a better strategy. While the shortcomings pointed out by critics are arguably correct, the improvements to the city’s ecology, public space, and civic culture, as well as the positive effects these have had on the perception and identity of Bogotá, are impressive and constitute a considerable achievement.

In the 1990s, Bogotá’s newly elected leaders began implementing transformational urban reforms. For a socially segregated city like Bogotá, these reforms were a historic breakthrough. The alamedas brought the informal and formal cities into an organic whole, marking the beginning of the end of a schism that had divided the city since its foundation. The urban projects have provided a physical identity and visibility to neighborhoods, rich and poor alike, and the wetland and forest restoration integrated the environment into the city’s structure, making it more than a mere site of resources. Perhaps most importantly, the renewal has also changed citizens’ perception of water, moving it away from the notion that water is a mere resource or sanitation problem to re-envisioning it as a fundamental part of the city’s identity.

René Davids is a professor of Architecture and Urban Design at UC Berkeley. He recently returned from a CLAS-sponsored research trip to Bogotá and Medellín.

From the Berkeley Review of Latin American Studies, Fall 2012