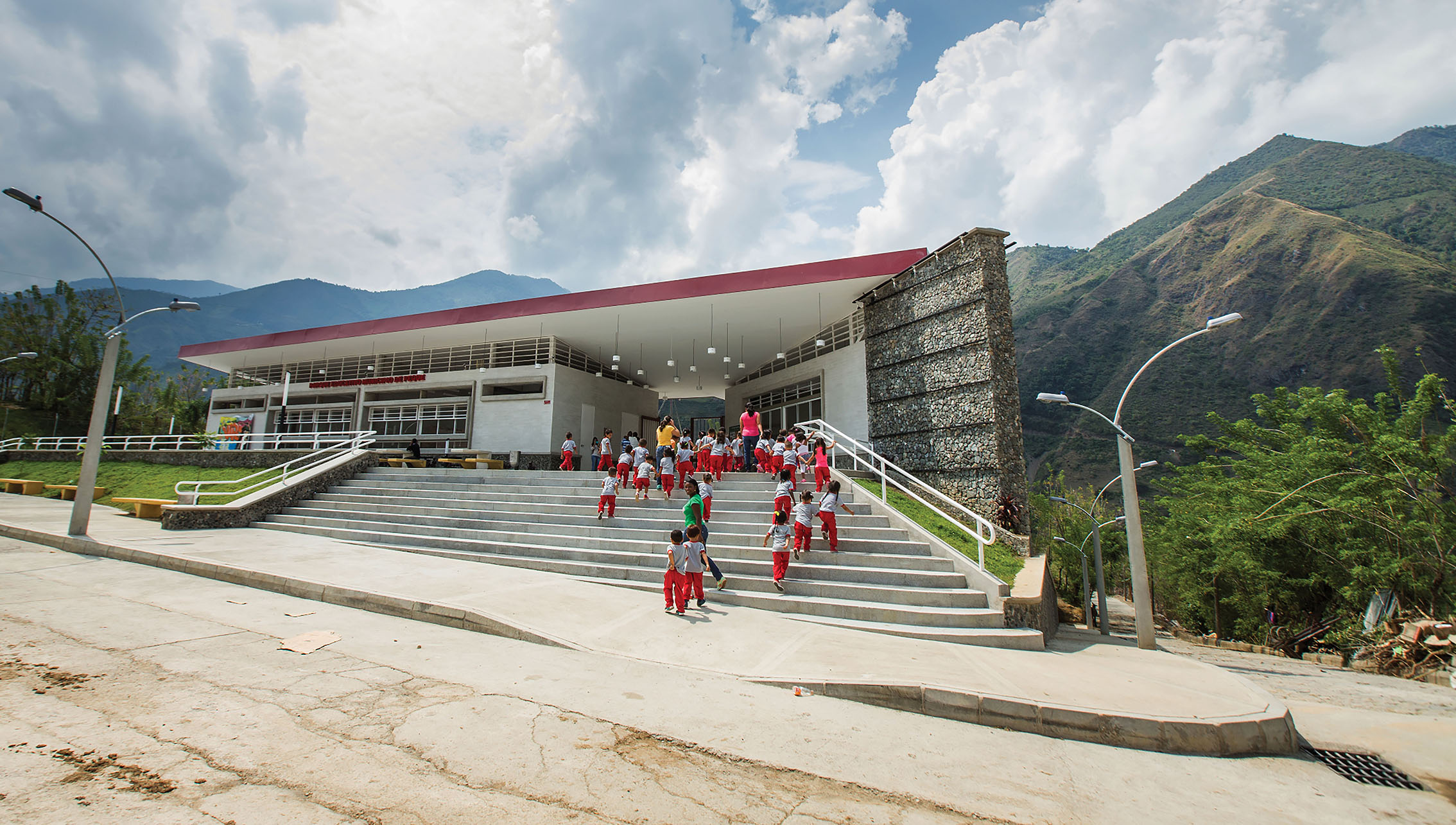 In Colombia’s 2018 presidential elections, a 62-year-old math professor transformed the race. He was in the running to become the country’s first new head of state since the 2016 peace accord that sought to end more than half a century of traumatic civil conflict. It seemed a logical next step. After all, Sergio Fajardo had already served his country as the mayor of Medellín, the third-most populous city in Colombia after Bogotá and Cali, and as the governor of Antioquia, the second-richest department in the country in terms of its GDP.

Just two months after the elections, Fajardo spoke for the Center for Latin American Studies (CLAS) at UC Berkeley. His informal look — jeans, rolled-up sleeves, and no tie, not even for presidential debates — as well as his personable campaigning style and his unusual trajectory, made it clear that he’s not your traditional politician. Before diving into local politics, Fajardo had received his Ph.D. in Mathematics from the University of Wisconsin and enjoyed a career as a math professor, teaching at the Universidad de Los Andes and the Universidad Nacional de Colombia in Bogotá. His years as an academic left their mark, evident today in the way he approaches politics. Fajardo claims that his greatest pride is to be a teacher.

Widespread corruption, violence, and drug trafficking had stigmatized Medellín for decades by the end of the 1990s, when Fajardo first became involved in politics. By then, he and a group of friends had realized that the most important decisions in Colombia — decisions that would eventually lead to structural changes — were made by politicians. So, they decided to start a civic political movement called Compromiso Ciudadano (Citizens’ Commitment). They originally founded Compromiso Ciudadano on the basis of 10 political principles that Fajardo called the “axioms.” According to Fajardo, these axioms — now numbering 18 — are the compass that has helped Compromiso Ciudadano navigate 19 years of doing politics differently. 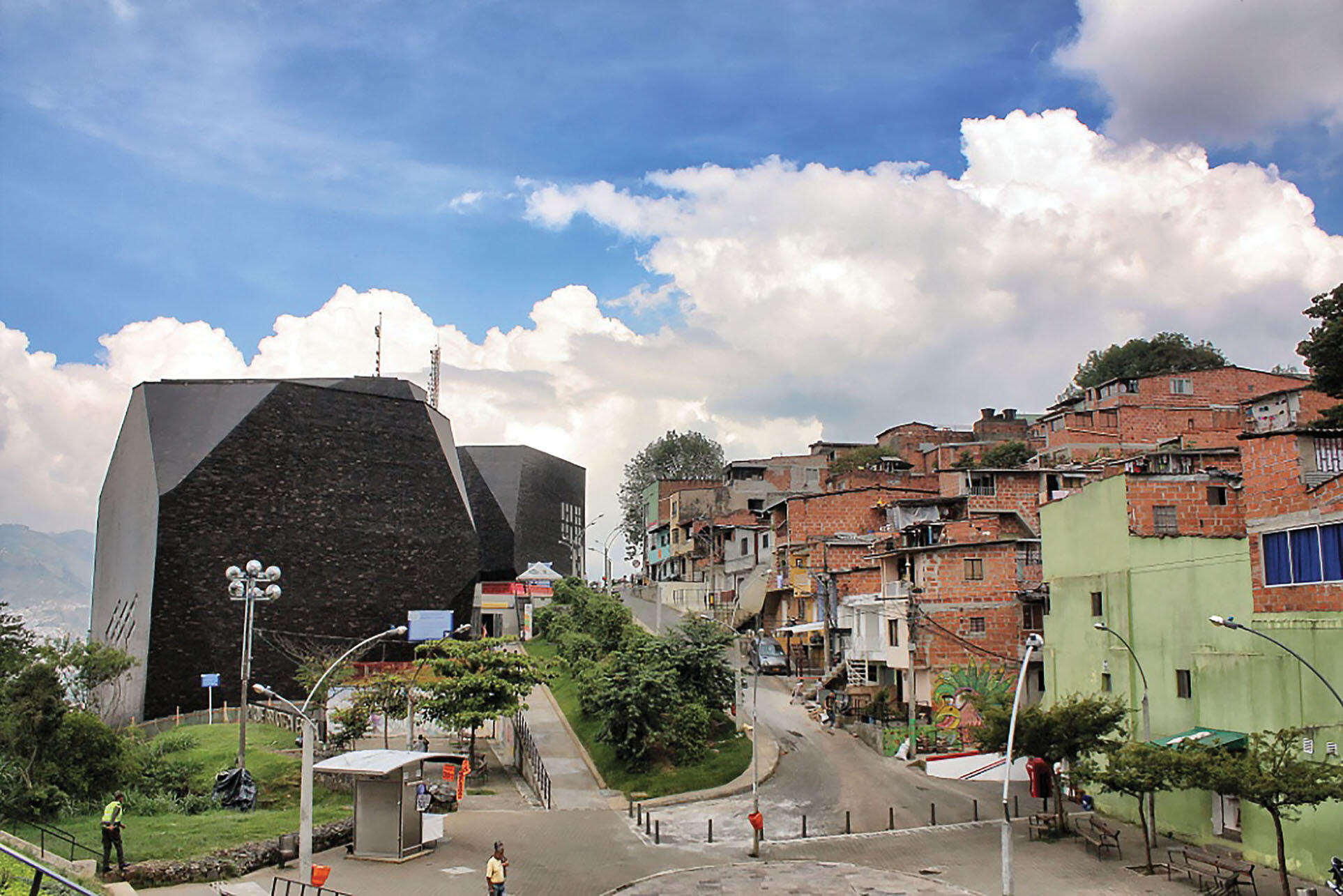 Compromiso Ciudadano decided to participate in Medellín’s mayoral elections under a campaign promise to defeat traditional structures that operate through networks of clientelism and corruption. Fajardo first ran in the 1999 mayoral elections as a full outsider — he had no previous experience in politics, and he wasn’t running with a traditional party — so his loss wasn’t a complete surprise. However, the second time Fajardo threw his hat in the ring for mayor of Medellín in 2003, he emerged victorious. Fajardo was the first independent candidate to win office, and he received the highest vote share of any mayoral candidate in the history of the office in Medellín. (Mayors only began to be popularly elected in 1988; before then, they were appointed by the national government.)

Under Fajardo, Medellín experienced an extraordinary transformation, which today is recognized around the globe. The city’s homicide rate plummeted from 400 per 100,000 people in 1991 — a figure that earned Medellín the infamous record of being the most violent city in the world — to 31.5 by the end of his term in office in 2007. How did this social transformation come about? According to Fajardo, the “engine of social transformation” is education, understood in a broad sense. Specifically, education empowers young people, who may be at the verge of passing over the threshold to a life of crime and violence, enabling them to make a radical pivot and develop a life free of crime. Education became his flagship program, linking all the initiatives of his administration under the umbrella slogan: “Medellín: la más educada” (Medellín, the most educated).

As governor of Antioquia (2012-2016), Fajardo continued to articulate his policies around education. Among the most impressive projects of the Fajardo administration were the parques educativos, massive architectural marvels constructed in the most remote and marginalized areas of Antioquia, where the state had been barely present before. These cultural centers emphasized innovation, experimentation, and knowledge. They provided the residents of neighboring communities with comprehensive libraries, free access to the Internet, technological tools, recreational areas, and other resources. Governor Fajardo also created several signature programs — such as Jóvenes con Futuro (Youth With a Future) and Entornos Protectores (Protective Environments) — that provided vulnerable young people with vocational training, along with sports and cultural activities, as an alternative to crime. 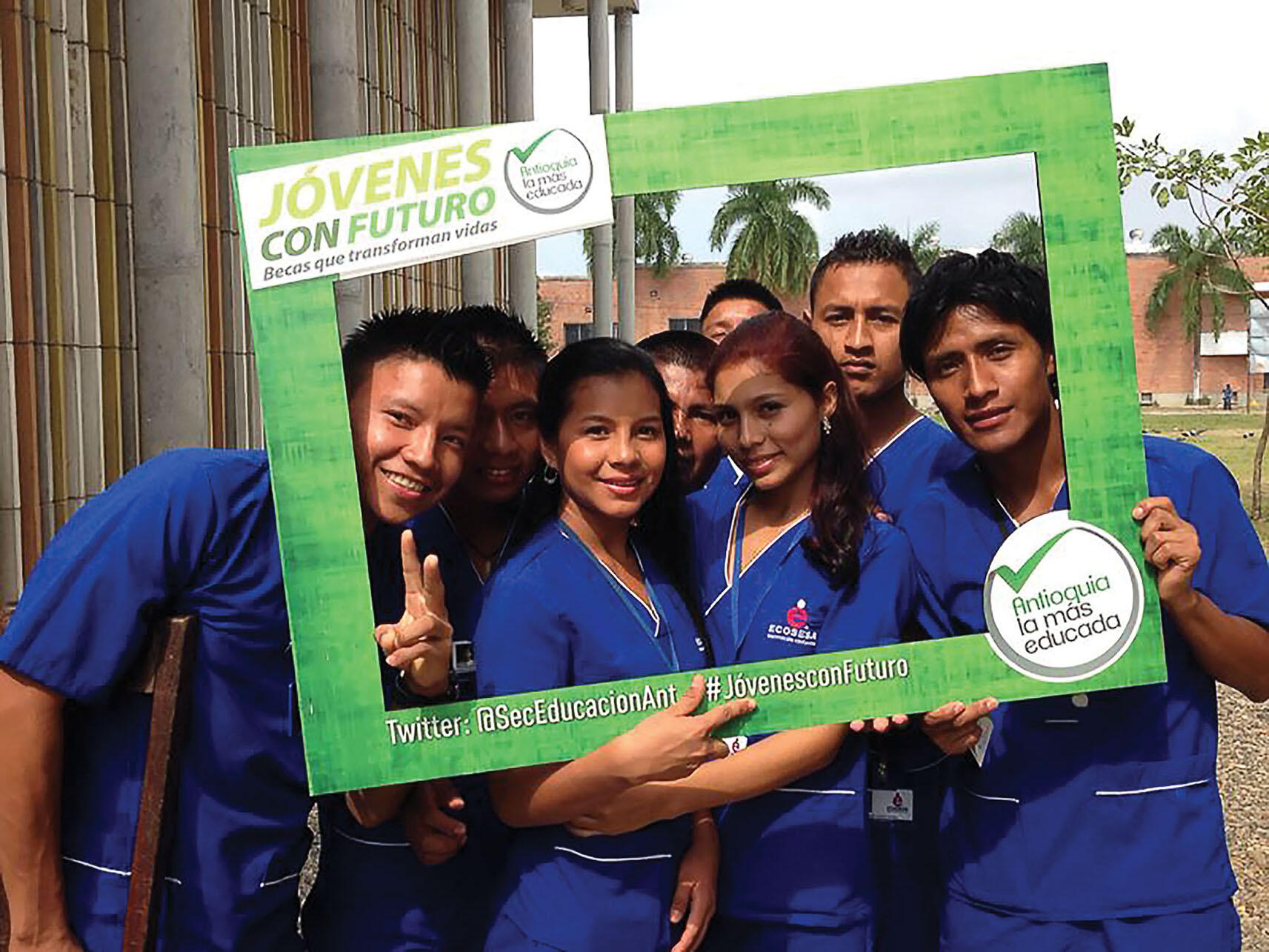 Fajardo’s commitment to education has been a leitmotif of his political career, including the 2018 presidential election. As he often stated in his campaign speeches, the main characters of Colombia’s history have always been drug lords, corrupt politicians, the guerrilla, and the paramilitary. By making education the main focus of policymaking, Fajardo envisions a new chapter of Colombia’s history, which he called a “chapter of opportunities,” where the lead roles are replaced with teachers, who Fajardo recognized as the most important social leaders of their communities.

Turning his attention to the 2018 presidential election, Fajardo highlighted the complexity of the context in which his campaign took place. He spent almost two years traveling throughout the country, finding a society he described as fragmented, unequal, afraid, and very indignant. To fully understand his diagnosis requires a brief account of Colombia’s recent history.

Colombia’s civil conflict was one of the longest in the Western Hemisphere. From 1964 until 2016, what began as a leftist Marxist-Leninist guerrilla group, the Fuerzas Armadas Revolucionarias de Colombia (FARC, Revolutionary Armed Forces of Colombia), fought the Colombian government in the context of a power-sharing agreement between the two most traditional parties in the country (the Liberal and the Conservative parties), which effectively limited participation in politics by minority parties and other groups. After more than 50 years of civil war — and more than 6 million estimated victims — Colombians reported extremely low levels of trust in the FARC. According to data from the 2012 and 2014 Latin American Public Opinion Project (LAPOP) surveys, less than 2 percent of Colombians declared their trust in the FARC. On the other hand, the 2016 LAPOP survey reported that only 25.5 percent of Colombians trusted the country’s president.

While there were earlier attempts at peace settlements in the 1980s and 1990s, it wasn’t until 2012 that President Juan Manuel Santos announced a new round of peace negotiations with the FARC in Havana, Cuba. For four years, these talks dragged on, while most Colombians remained in the dark about what was actually being discussed on the island. Nonetheless, President Santos eventually kept his promise to allow the people of Colombia to have the last word on the final document signed by the representatives of FARC and the government. On October 2, 2016, a plebiscite was held with the majority of voters rejecting the final peace accord, an outcome that came as a surprise to many Colombians.

In the end, however, Congress stepped in to approve an amended agreement that incorporated some of the comments and modifications demanded by the opposition. At this point, Colombian politics was at a crossroads, with the country polarized between those supporting the peace agreement and those against it (this latter coalition was led largely by former President Álvaro Uribe Vélez). According to Fajardo, Colombians missed a unique opportunity to unite the country around the positive — in fact, essential — national project of peace.

This climate of polarization carried over to the 2018 presidential elections. Colombians were fragmented as a society and also distrustful of the country’s political class following one of the biggest corruption scandals in the recent history of Latin America. The Odebrecht scandal involved bribes received by high-profile politicians (both in Colombia and other countries in the region) from the eponymous Brazilian construction firm in exchange for obtaining construction procurement contracts.

In this context of dramatic polarization and general indignation, Fajardo ran for the presidency under the slogan of “La fuerza de la esperanza” (The Strength of Hope), which symbolized his efforts to reconcile the country and unite it around a new joint project: education. His campaign was based on three main issues: education, reconciliation, and the fight against corruption. And just like his very first campaign, when he ran for mayor of Medellín in 1999, Fajardo traveled throughout Colombia, canvassing neighborhoods and handing out leaflets in the streets. He also held what were called conversaciones ciudadanas (citizen conversations) to learn about Colombians’ most pressing concerns. In the midst of one the most polarized elections in recent history, Fajardo maintained a serene campaign style, always advocating for education as the engine of social transformation and reminding citizens that “the means justify the ends.” 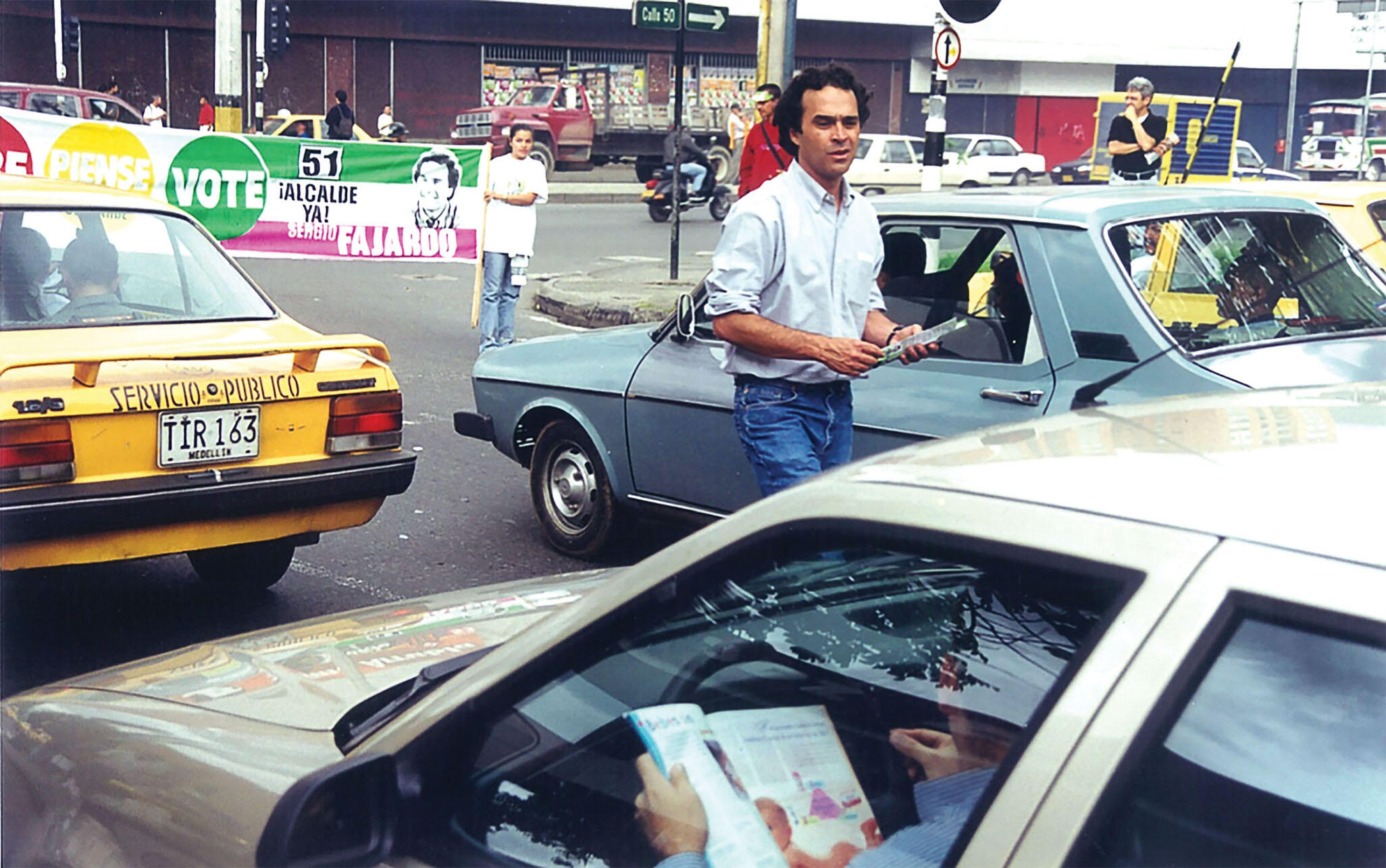 In the end, Fajardo narrowly missed making the second round, which was disputed between Gustavo Petro, former mayor of Bogotá, and Iván Duque, a young conservative who ran (and won) with the support of Uribe. Yet, Fajardo made a very good showing: he won 4.6 million votes (approximately 24 percent), only about 200,000 votes less than Petro (a difference of less than 1.5 percentage points). These figures mean that millions of Colombians believe in a new vision of doing politics outside traditional structures and are committed to a unifying project that not only promises structural change but has been tested in the past with positive results. In fact, a number of polls indicated that Fajardo could have won the final contest had he made it into the second round.

Since the beginning, Fajardo and Compromiso Ciudadano have made a tremendous effort to renew the way politics has traditionally been done in Colombia. In keeping with this goal, Fajardo’s campaigns have always been in the streets, walking around every inch of territory, talking to people, listening to their concerns, and carefully studying the root causes of the major problems identified through this process.

Reflecting back on the lessons learned after 19 years in politics, Fajardo observed in his speech for CLAS that it is precisely this new way of doing politics that builds trust among citizens. This relationship of trust, he assured us, is the most important political capital that he and Compromiso Ciudadano have been able to accrue. Trust connects candidates with citizens in an inherently different way from traditional politicians, who tend to create support on the basis of clientelistic (quid pro quo) linkages. But trust cannot be bought, it must be built, as Fajardo and Compromiso Ciudadano have consistently been doing for nearly two decades.

According to Fajardo, doing politics differently also requires being more aware of the means employed to mobilize voters and address the problems. “The means we use are as important as the ends we pursue,” he emphasized. Fajardo shared his firm belief that how candidates mobilize voters and build support to get into power determine the constraints they will face once in office, explaining that electoral campaigns are the initial entry point for corruption. During his 2018 presidential campaign, Fajardo stressed that the key to being able to govern with “no strings attached” — and therefore being able to fight corruption — is not paying a single peso or offering any contracts in exchange for votes.

Colombia has several major problems to address, Fajardo observed. These problems include tremendous inequalities, pervasive corruption, and entrenched violence. But the nation as a whole must recognize the abilities of every individual in society and ensure that all citizens are able to have a say in how resources are being spent. Politics should emphasize transparency and pedagogy, he concluded, it should empower citizens and their communities and connect different sectors around a common project, which for Fajardo will always be education.

Sergio Fajardo has served Colombia as the mayor of Medellín (2004-2007) and the governor of Antioquia (2012-2016). A presidential candidate in his country’s 2018 elections, Fajardo holds a Ph.D. in Mathematics from the University of Wisconsin. He spoke for CLAS on October 2, 2018.

Natalia Garbiras-Díaz is a Ph.D. candidate in the Charles and Louise Travers Department of Political Science at UC Berkeley. 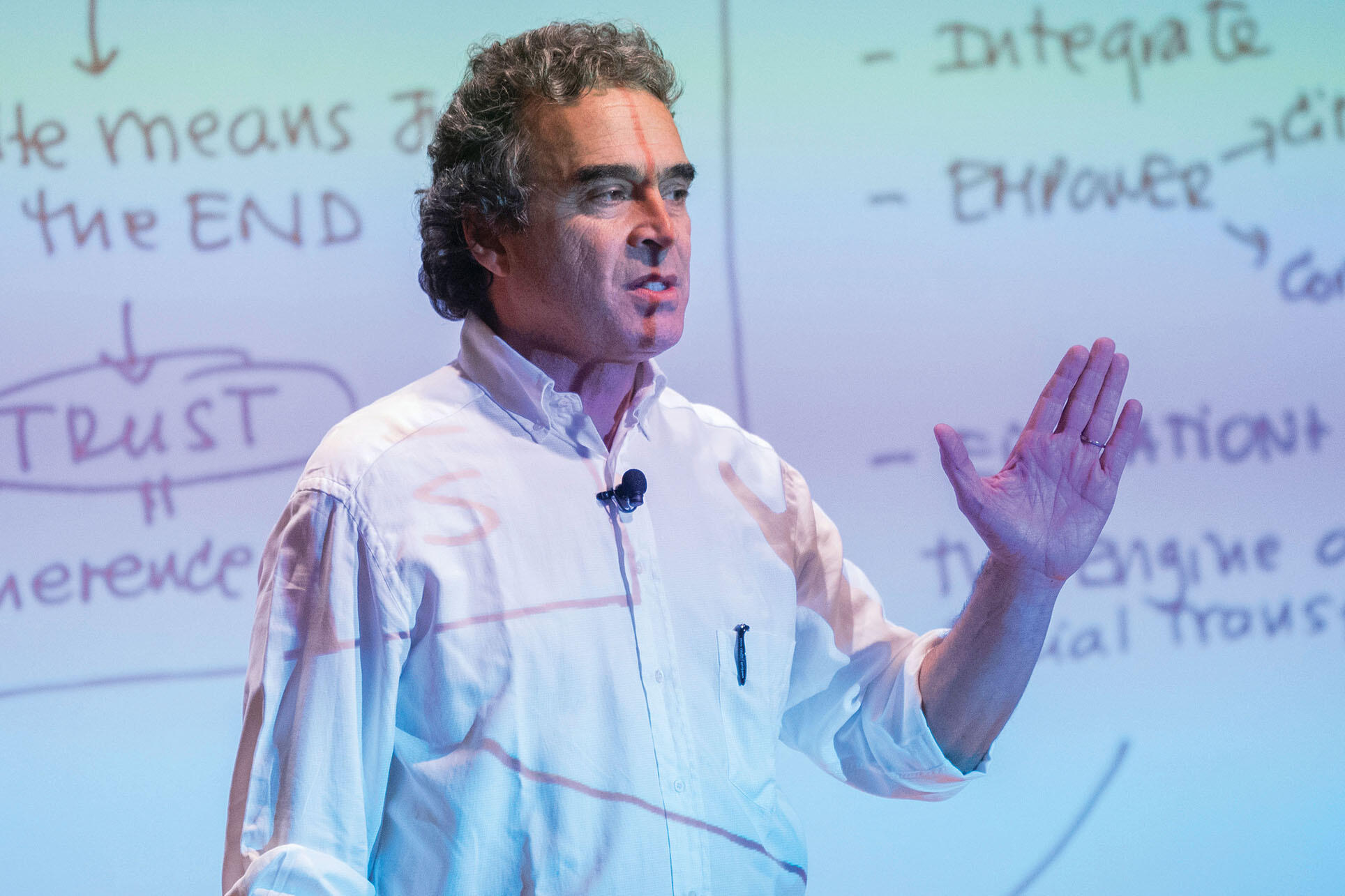