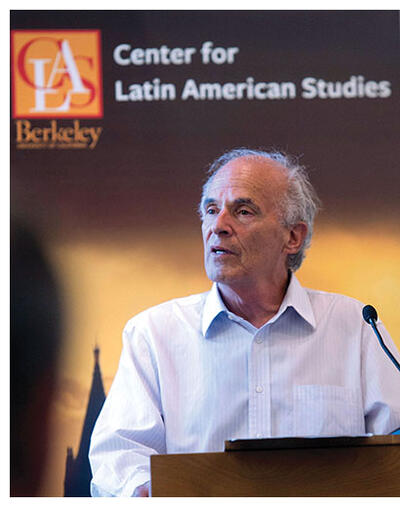 This issue of the Berkeley Review explores Mexico from contemporary political crisis to pre-Columbian ruins, stopping at a historic art exhibit in Detroit along the way.

Henry Kissinger presented Mexican President Peña Nieto with the World Statesman Award “for all of what you have already accomplished as well as for all that lies ahead,” on September 23, 2014, at a gala banquet in New York City. Three days later, what “lies ahead” for Mexico would be thrown into question. In the midst of a protest, Mexican police shot and killed six students from a rural teachers college in Ayotzinapa and abducted another 43 who have not been heard from since. Public outrage over the incident combined with anger over charges of corruption at the highest levels to create a toxic mix. Nonetheless, the Institutional Revolutionary Party (PRI) avoided a rout in the June mid-term elections, losing seats but retaining a slim majority in the lower house. Voter frustration spilled over and damaged the two main parties of the traditional opposition in Mexico.

We begin this issue with an article on the missing students, “It Was the State,” the English translation of a widely used slogan and hashtag, #FueElEstado. The article provides historical and social context for what took place, based on research by Alberto Díaz-Cayeros, a senior fellow at the Freeman Spogli Institute at Stanford University.

We then examine a number of critical social, economic and political questions facing Mexico. “Mexico’s Second Land Reform” looks at the far-reaching implications of agrarian transformation over several decades and is based on the research of Alain de Janvry, a professor of Agricultural and Resource Economics at UC Berkeley. Other articles explore the intersection of policing and criminal justice in Mexico, the crisis of water in Mexico City, and “The Querétaro Approach.”

In “Teotihuacán: A Multiethnic Metropolis,” we present fresh insights into one of the most important archeological sites in Mexico through the decades of work by archaeologist Linda Manzanilla, a professor at Universidad Nacional Autónoma de México (UNAM). Professor Manzanilla’s event in Berkeley in Spring 2015 inaugurated a new collaboration between the Center for Latin American Studies (CLAS) and the Mexican Museum in San Francisco.

At the center of this issue, we highlight an unprecedented exhibit at the Detroit Institute of Arts (DIA) entitled “Diego Rivera and Frida Kahlo in Detroit.” Both artists were transformed by the year they spent there, an intense, passionate and, at times, traumatic period. Their art truly transcends borders.

Nancy Scheper-Hughes, a professor of Anthropology at UC Berkeley, and Jennifer Scheper Hughes, an associate professor of History at UC Riverside, provide perspective on the early trajectory and multiple contemporary challenges of the first leader of the Catholic Church from Latin America in “The Final Conversion of Pope Francis.” Nancy Scheper-Hughes then reflects on her experience meeting the charismatic Pope at the Vatican.

Finally, flying across our cover is a monarch butterfly, an iconic native to North America that makes a miraculous journey over thousands of miles from southern Canada and the United States to overwinter in Mexico. Homero Ardijis, noted poet and environmentalist writes, “every winter of my childhood in Contepec, Michoacan, millions of orange and black monarch butterflies magically arrived to the oyamel fir forest at the summit of Altamirano Hill.” Environmental issues and climate change now threaten this species whose population has plummeted to 33 million from an estimated 1 billion two decades ago. The monarch offers a challenge to the three countries in North America to work together to preserve an irreplaceable common heritage.