A Conversation with the Sánchez Sisters 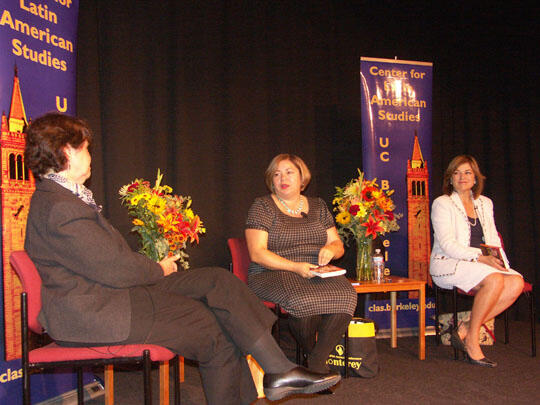 With her 2002 election, Linda Sánchez joined her sister Loretta in the U.S. Congress, and the two became the first women of any relation to serve together in the House of Representatives. They recently coauthored a joint autobiography, Dream in Color.

Born to Mexican immigrants with little formal education, Linda and Loretta Sánchez went on to become the first sisters to serve in Congress. In November, they stopped in Berkeley to share their stories and promote their joint autobiography, Dream in Color. They told childhood anecdotes and tried to instill political aspirations. Their message, as Linda Sánchez put it, was “anything is possible if you’re determined enough.”

The lecture, sponsored by the Center for Latin American Studies, took place just over a week after Election Day. This timing set both an optimistic and an urgent tone for the talk. In a historic victory, Democrat Barack Obama won the presidential race. The Sánchez sisters, both Democrats, saw their party’s numbers increase in Congress.

Loretta Sanchez took office in 1997. She represents the 47th congressional district in Orange County. In her family, she is the second of seven children. Linda Sánchez is the second youngest. She ran for office in the 39th district in 2002 and followed in her sister’s footsteps to Congress.

Beatriz Manz, professor and chair of the Department of Ethnic Studies, introduced the sisters and welcomed Linda Sánchez, a UC Berkeley alumna, back to her alma mater. Manz commended the book, saying, “It says so much about a Latina family and what that’s like — beginning with the commitment to community participation and giving more than just to yourself and to your family.”

Linda Sánchez said, “The older I get the more I amazed I am at how wise they were and lessons that they taught us.” Growing up in the City of Orange, California, neither their father nor their mother had much more than an eighth grade education. Their mother, Maria Sánchez, led by example — passing on personal strength, pride and values.

Maria Sánchez raised her children to speak both Spanish and English at a time when doing so was frowned upon. When questioned about it by a teacher, Linda Sánchez said her mother stood her ground.

As a child, Loretta Sanchez loved table grapes. When she would pick them up at the grocery store, her parents always put them back. They reminded her, “Cesar [Chávez] told us not to eat them.”

In solidarity with the striking farm workers, they did not buy table grapes. Years later, when Linda and Loretta Sánchez were young adults, their mother picked them up one morning, without explanation, to meet a friend. That friend was Cesar Chávez.

Their father, Ignacio, believed in hard work and valued tradition. Linda Sánchez described his approach to parenting as “very tough love — and emphasis on the tough.”

When they turned 15, he required that his children get a job. Linda Sánchez chose to join her father in the machine shop where he worked. After a day of difficult, dirty manual labor, nothing she did would remove all the grease from her hands. “‘Look at these,’ Dad said, showing me his own hands, which had scars, calluses and permanent half moons of grease under the nails. ‘If you don’t go to college, this is what your hands will look like for the rest of your life.’”

Although her father was strict, when it came to education, Linda Sánchez described him as revolutionary for his generation. He encouraged his sons and daughters to go to college. He did, however, try to impose limitations on this for his daughters.

Ignacio Sánchez wanted his daughters to stay close to home, so, in order for Linda to follow her older sister’s advice and go to UC Berkeley, it took no small amount of effort from the women in the family. Her father didn’t find out until she packed up her car for the 400-mile trip, apartment already rented and tuition paid. By then he could not argue.

Their father instilled in his children a commitment to hard work. One of Loretta Sanchez’ constituents, an older white man, told her that her father was the hardest working man he had ever known. Although Ignacio Sánchez now has Alzheimer’s disease, Loretta Sanchez said she still asks herself, “How would Dad have handled this?”

Before their congressional careers both women worked in male-dominated fields. Linda Sánchez was a labor lawyer. She studied law at UCLA after graduating from UC Berkeley. Loretta Sanchez was an investment banker. She received a bachelor’s degree from Chapman University in Orange, CA and became the first Latina member of its Board of Trustees in 2002. She earned a MBA from American University in Washington, D.C.

In Congress, they continue to make their mark. Loretta Sanchez serves on the Armed Services, Homeland Security and Joint Economic committees. She said, “I do war, terrorism and deficit all day long.”

Loretta Sanchez explained how they see their position. “We don’t only represent the people who elect us, but in the sense because we’re women, because we’re Hispanic, because we’re young, we have a whole following nationally.”

They wrote Dream in Color to motivate this following and released it as a $15 paperback to reach as many people as possible. Linda Sánchez said that each wave of immigrants enriched the country and added color to the American dream. She urged the audience, many of whom held copies of the book, to think of it as a permission slip to pursue their dreams. “There are so many things to do, so many things to be done. We want each and every one of you to live that out,” Sánchez said.

Angelina Toscano, Rent Board Housing Counselor for the City of Berkeley, brought up a march on Washington D.C. planned for January 21, the day after Obama’s inauguration. She said the Spanish media was buzzing about it, and Toscana asked the congresswomen, “Is it too soon for the Latina community to bring the immigration issue to the forefront?”

Loretta Sanchez answered first, explaining that the capitol would be a cold, wet madhouse that week. “I’m not a big demonstration kind of a person,” she admitted.

Linda Sánchez didn’t miss a beat. “You can tell she didn’t go to Berkeley.” She added, “As much as it pains me to say this, I actually agree with my sister.” Sánchez said she believes in visible signs of protest but stressed that contacting congressional representatives is also important and powerful.

Audience member and author Randy Shaw asked the congresswomen if either had considered running in the next governor’s race. He said, “There are a lot of people who believe that a pro-labor Latino would be a very strong candidate.”

Linda Sánchez answered first, saying no categorically. Loretta Sanchez, however, said that she was definitely taking a look at it. She added that her sister would make an ideal Secretary of Labor for President-elect Obama.

After the question and answer session, the Sánchez sisters stayed to sign copies of Dream in Color, and the line wound its way around two sides of the room. Miriam Meux, the recent graduate who brought up double standards, had her copy signed. The inscription read, “Para Miriam, Hay que siempre soñar. Buena suerte, Linda.”

Congresswomen Linda and Loretta Sánchez represent the 39th and 47th districts of California, respectively. They spoke for CLAS on November 12, 2008.

Angela Kilduff is a student in the Graduate School of Journalism at UC Berkeley.