COVID-19: Chile: A Health Crisis Within a Social Crisis 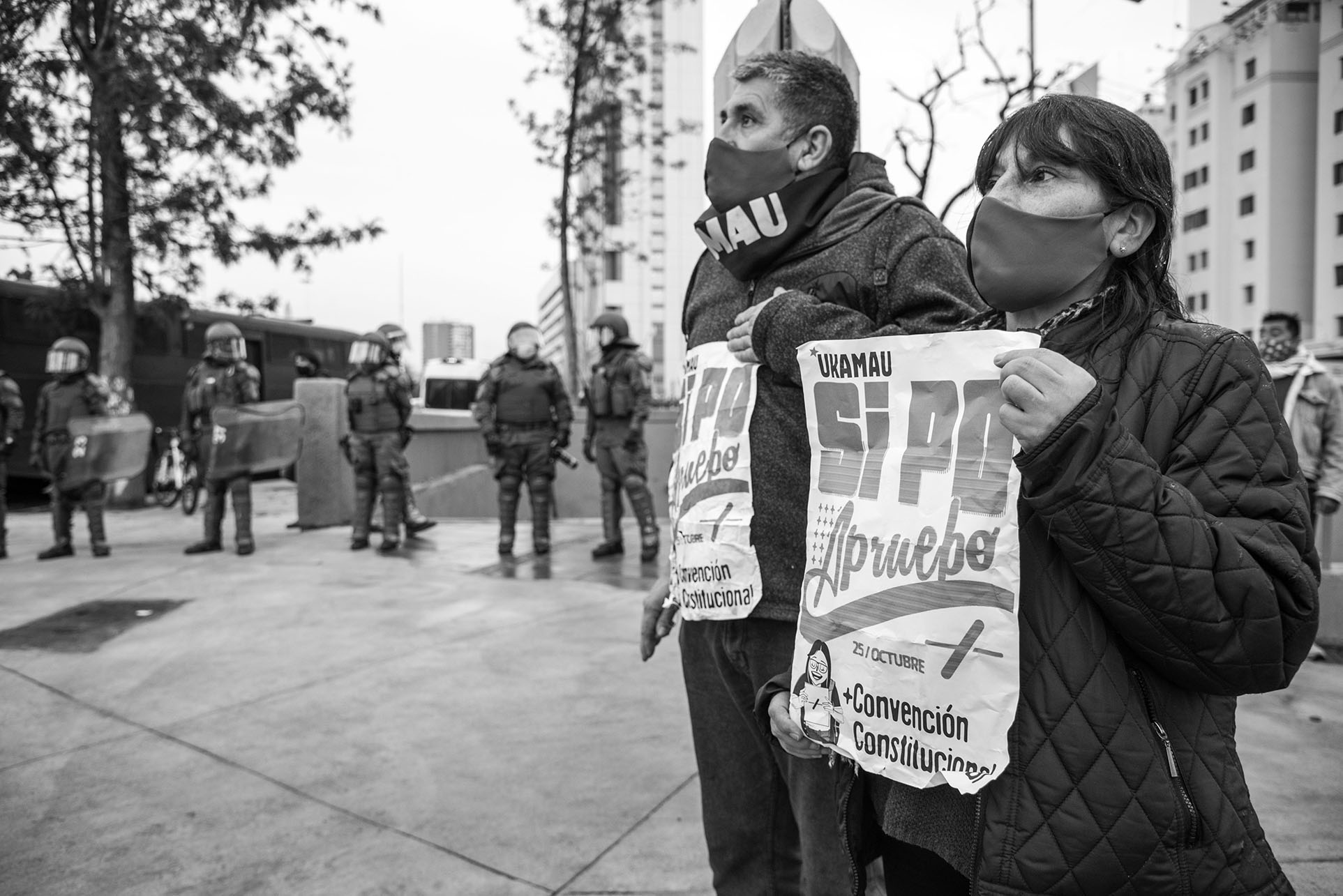 In recent decades, Chile has been admired worldwide as an example of political stability, economic growth, fiscal responsibility, and incremental social policies. Nonetheless, the political and social crisis of 2019 revealed a series of flaws in the “Chilean miracle.” Massive public protests called for changes in major social protection policies in the pension, healthcare, and education systems. Social policies once considered successful (Taylor, 2003) were being challenged by the people.

Despite the promise of a new constitution, the political and social unrest unleashed in October 2019 left scars of profound distrust and disbelief in democracy and political institutions. By March 2020, these sentiments were reinforced by erratic health policies and long-delayed implementation of social policies needed to address the economic crisis stemming, in part, from the Covid-19 pandemic. Today, Chile continues to struggle with paradoxical outcomes in its vaccination campaign and the current political imbroglio of the Covid-19 response.

The Social and Political Crisis

In October 2019, high school students started dodging subway turnstiles in Chile’s Metropolitan Region, which includes the nation’s capital of Santiago. What began as a protest against a fare increase of about US$0.04 quickly spread across the country. By October 18, 2019, people gathered in huge but peaceful rallies demanding major transformation of social protection policies (Méndez et al., 2020). After incidents of violence against public and private property, President Sebastián Piñera signed a state of emergency decree on October 19, making the armed forces responsible for restoring order in the Metropolitan Region (Méndez et al., 2020). Decrees for other regions were signed in the following days to quell protests throughout the country.

Unable to meet the social demands of the people, the government focused on restoring order and justified its use of violence. Piñera’s efforts to sway public opinion failed, and the protests continued nationwide. The National Congress likewise failed to move strongly enough to overcome the crisis. While some articles in the Constitution established under the military dictatorship of General Augusto Pinochet (1973-1990) had been amended during the administration of President Ricardo Lagos (2000-2006), a great deal of power remains concentrated in the figure of the president.

Before October 18, 2019, Chile’s political landscape was struggling, as usual, with the political process and policy agenda driven by the Piñera administration. The legislative branch had enjoyed a redistribution of power since recent political reform had put an end to the binominal system under which political coalitions from both the right and left secured congressional seats. Under a new D’Hondt system, representation from other political parties increased, but political opposition remained ineffective.

Shortly after the state of emergency was declared, the first cases of human rights violations at the hands of the police and armed forces were reported. Videos from media covering the protests and from citizens recording with mobile phones as well as eye-witness accounts of human rights observers from the Instituto Nacional de Derechos Humanos (National Instituto for Human Rights) brought attention to the cases of people who had been intentionally shot in the eyes with rubber bullets or who had received humiliating treatment while in detention.

With the Piñera administration’s unwillingness to change its agenda, the people continued to take to the streets, and they put the National Congress in their sights (Deutsche Welle, 2019). Weeks later, on November 15, 2019, there was still no political solution to the crisis as members from almost all the political parties represented in Chile’s National Congress signed the Agreement for Peace and a New Constitution (Hernandez & Gigova, 2019). This agreement included a national referendum for a new constitution replacing the charter enacted during Pinochet’s dictatorship. The referendum was scheduled for April 26, 2020. 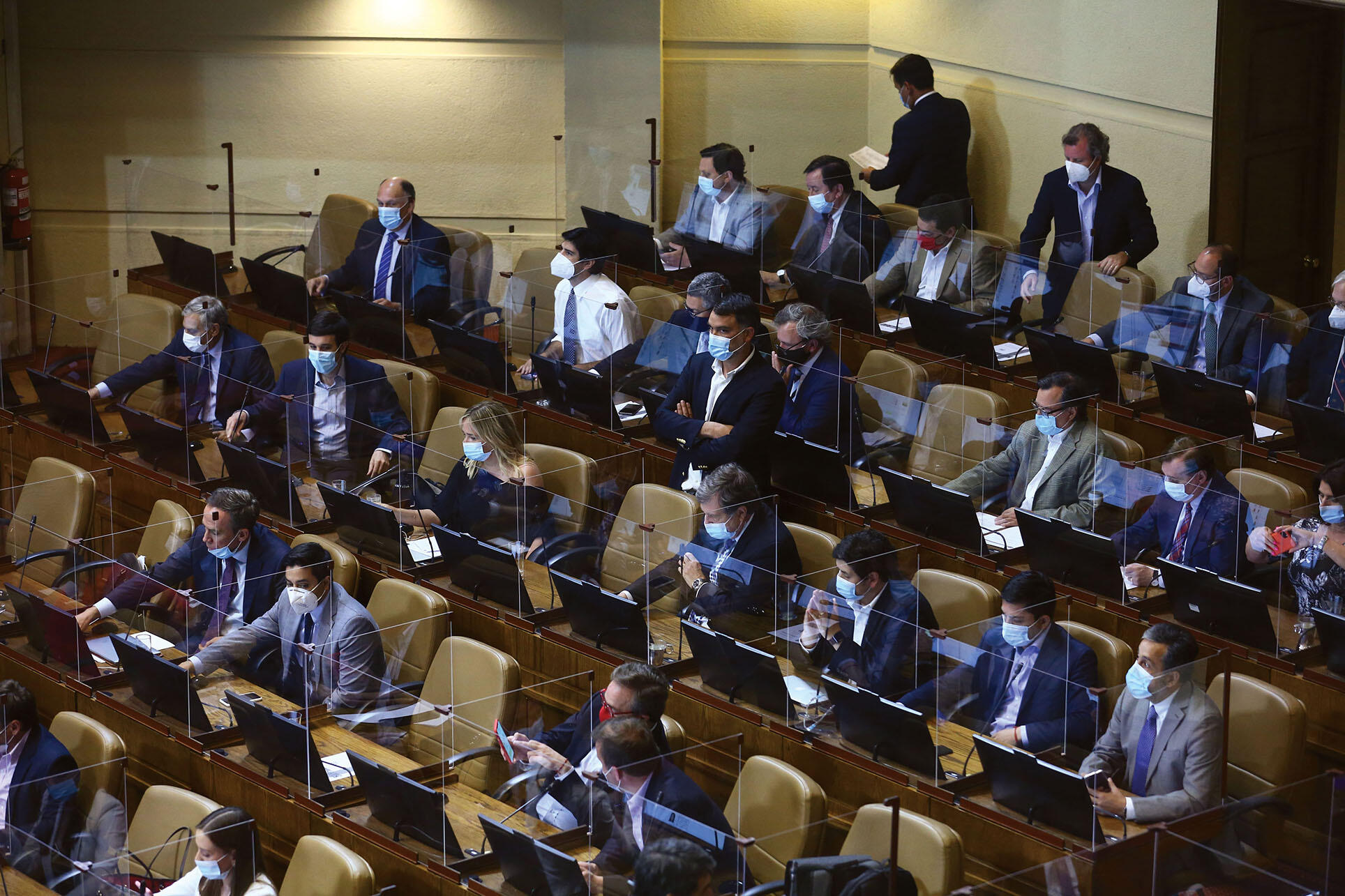 The nation’s political and social crisis was still ongoing when Covid-19 hit Chile, and the changes demanded by the people several months earlier would have been key for a better response. Nonetheless, the very same government that was incapable of making political and policy changes in October 2019 was now responsible for designing and implementing policy measures to cope with the Covid-19 pandemic. In this context, the referendum for the new Constitution was postponed until October 25, 2020.

The Health Crisis of Covid-19

On March 3, 2020, Chile’s first case of Covid-19 was confirmed at a time when the country’s political institutions were still under public scrutiny. According to the Johns Hopkins University Coronavirus Resource Center, one month later, the country had reported more than 300 cases and eight deaths (Johns Hopkins University, 2020). As of May 2021, Chile has recorded more than 1.5 million confirmed and suspected cases of Covid-19 and 36,000 Covid-related deaths (Departamento de Epidemiología, 2021), despite a vaccination campaign that has garnered international attention (Kirby, 2021).

With the president unable to solve the ongoing social and political crisis (even with his ample powers) and the National Congress not able to meet the people’s social demands, the Chilean government was ill-prepared to draft a response plan to the public health emergency. Once the SARS-CoV-2 virus started to spread throughout the country, with a daily increase of cases and deaths, the healthcare system was the linchpin of Chile’s fragmented and conditional cash-transfer-based social protection system.

Despite the referendum for the new Constitution proposed as a path for a new rights-based society, Covid-19 clearly demonstrated that pension, health, labor, and other social policies demanded by the people were needed more than ever before. Even with the option of changing the Constitution through an elected constitutional convention that ensured parity, the social crisis increased dramatically with greater unemployment, food shortages, and inequalities in access to the health care system.

The pandemic has demonstrated the importance of comprehensive integrated social protection systems to support health policy. Likewise, the crisis has shown how neglecting social policy can undermine the response from the health sector (Méndez, 2021). In the case of Chile, a health crisis in the context of a social crisis had a one-way solution: politics, the same politics that had failed months earlier to alleviate social unrest through meaningful changes in Chile’s political systems and policies of social protection.

As people started to cope with the pandemic, their severe distrust in the government and politics increased, galvanized by a generalized lack of leadership. Erratic policy measures — such as allowing the country’s borders to remain open, while implementing partial lockdowns in the Metropolitan Region, the so-called “dynamic quarantines” for small areas within the city (Canals et al., 2020) — did not help connect the government’s messages with a population suffering not only the consequences of Covid-19, but the symptoms of a precarious socio-economic situation, as well.

This distrust was soon justified as the president, backed by his neoliberal cabinet, was reluctant to raise public spending. Instead, Piñera encouraged employers to give workers paid time off rather than taking steps to provide emergency income. Furthermore, media images of Minister of Finance Ignacio Briones and his fellow Minister of Social Development Sebastián Sichel as they celebrated the passage of the Ingreso Familiar de Emergencia (IFE, Emergency Family Income) seemed to imply the administration would rather prop up the economy than help the people. After long negotiations, the National Congress finally passed legislation to establish three IFE payments according to the number of family members. Under Law No. 21230, families with no formal income would receive 65,000 to 100,000 Chilean pesos (around US$123) per person, so the income for a family of four could be as much as US$492 (Gobierno de Chile, 2020).

To combat food shortages due the loss of formal and informal sector employment, communities started to organize ollas comunes (soup kitchens) (Dragnic, 2020). Municipalities stepped up to fill the gaps left by the lack of leadership. They implemented social support programs and challenged the centralization represented by the Piñera administration. 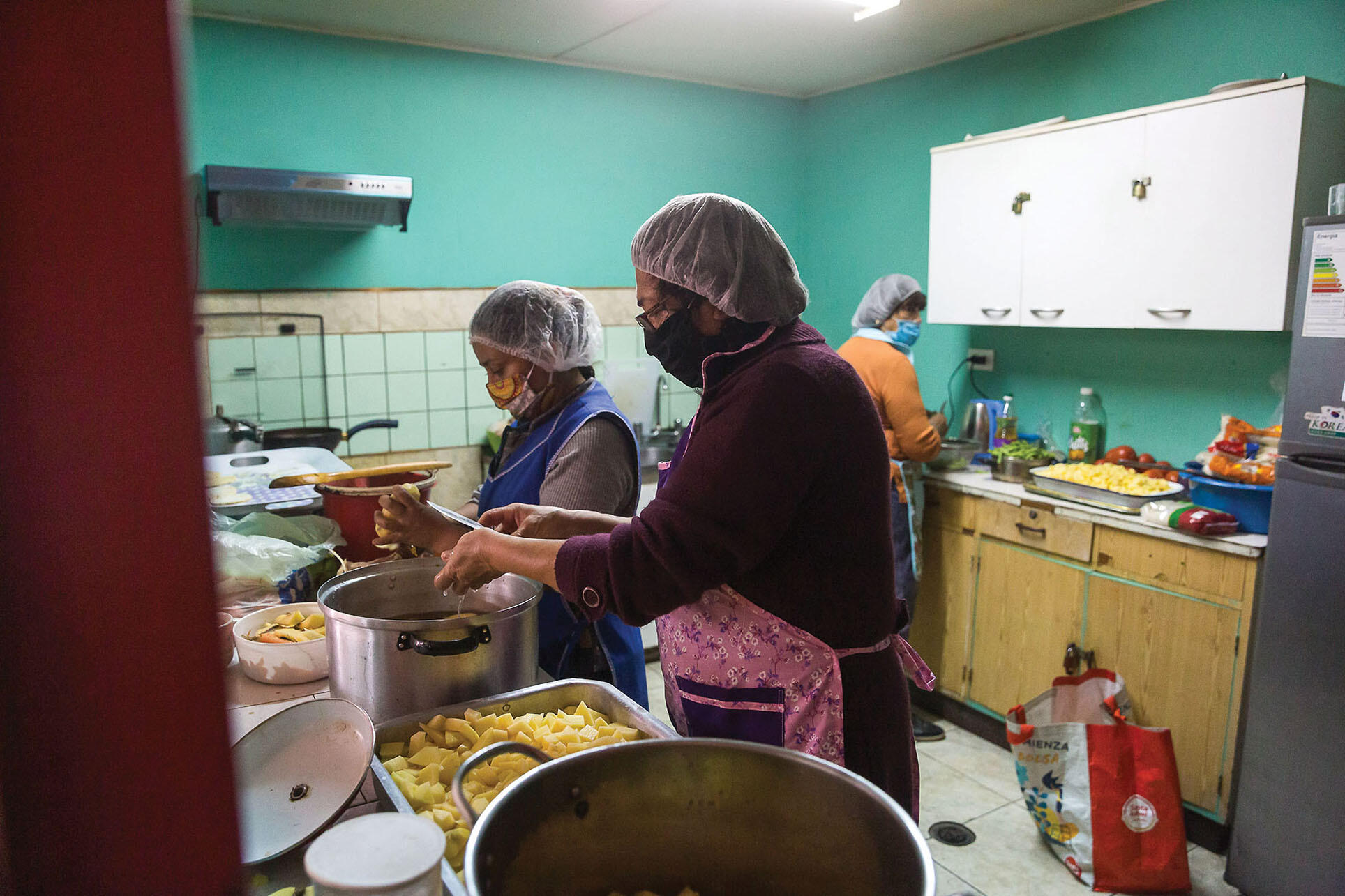 Chile’s shutdown and reopening indicators were announced in the Plan Paso a Paso (Step by Step Plan) on July 2020 (Prensa Presidencia, 2020) and involved epidemiological indicators at the community and regional levels to move from quarantine to phased reopening. In the meantime, continuing waves of lockdowns have forced small business owners to close, and unemployment has increased. In light of these circumstances, the government should boost the IFE, which is still insufficient.

In March 2021, Chile began an aggressive vaccination campaign through the solid nationwide network of primary healthcare centers. These efforts started in 2020 with the government signing advance agreements with Pfizer-BioNTech (United States/Germany) and Sinovac (China). The Chilean government coordinated purchase agreements of the vaccines with the best prospects according to clinical trials (Diaz-Cerda, 2021). At the same time, the Pontificia Universidad Católica de Chile helmed Sinovac’s clinical trial in Chile, which facilitated the purchase agreement (Diaz-Cerda, 2021).

Under the direction of the municipalities, the primary healthcare system quickly selected and coordinated vaccination centers to facilitate access to the vaccine for the age groups prioritized by the government. For weeks, Chile was in the international spotlight due its high vaccination rate. Piñera and his cabinet sought to leverage the attention for political gain as soon as the shipments of vaccines began arriving in the country. The first vaccine shipment was received personally by Piñera and Minister of Health Dr. Enrique Paris. This event was broadcast on the news, and the president’s approval rate increased.

However, despite a very successful start to the vaccination efforts, by April 9, 2021, the country had reached a daily record of more than 9,000 confirmed cases, compared with almost 7,000 daily cases in June 2020 (Chambers, 2021). The second wave hit harder, and it was avoidable. The Chilean vaccine campaign paradox was covered by the same media that once highlighted Chile as an “amazing vaccination machine.” In fact, one of the main explanations for the paradox was the vacation leave promoted by the Piñera administration itself and a misguided communication campaign about how the two doses of vaccines worked (Bonnefoy & Londoño, 2021).

On May 15 and 16, 2021, Chile held the first round of elections for governor in the country’s 16 regions and for mayor in the 345 municipalities. Among other elected officials, voters also chose the 155 representatives to the constitutional convention who are charged with drafting the country’s new charter. Yet, the political and social crisis continues, as the government and the National Congress discuss various social measures, including universal basic income for the entirety of the vulnerable population on the Registro Social de Hogares (Social Household Registry).

The next few months will be crucial for Chile, with upcoming elections for president as well as senators and deputies within a political environment dominated by the constitutional convention. And yet, the social crisis and distrust in political institutions remains far from diminished.

Acknowledgements: A longer version of this article was published as “The Politics of the COVID-19 Pandemic Response in Chile” in Coronavirus Politics. The Comparative Politics and Policy of COVID-19 (University of Michigan Press, 2021), edited by Scott L. Greer, Elizabeth King, Elise Massard da Fonseca, and Andre Peralta-Santos, which is available online at https://doi.org/doi:10.1353/book.83273. We are grateful for the courtesy of Creative Commons licensing that makes possible the publication of this article. 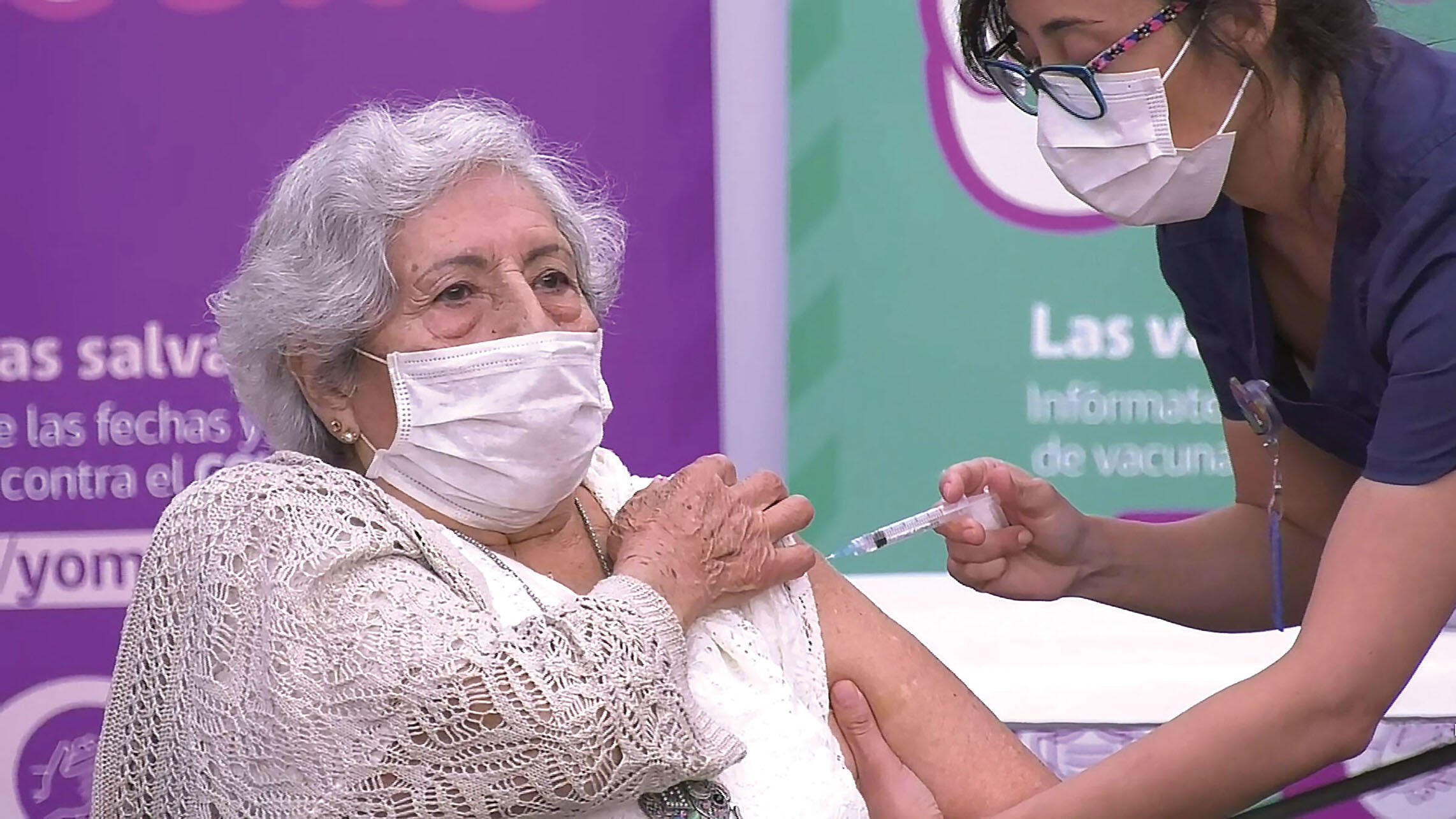 Diaz-Cerda, V. (2021). How Chile became an unlikely winner in the COVID-19 vaccine race. The Conversation,. https://theconversation.com/how-chile-became-an-unlikely-winner-in-the-c...

Kirby, J. (2021). How Chile built one of the world’s most successful vaccination campaigns. Vox. https://www.dw.com/en/how-chile-built-one-of-the-worlds-most-successful-...