Emerging economies will account for more than 90 percent of new energy-generation capacity by 2035, and Latin America is no exception to this trend. In the last 40 years, the region’s primary energy demand has more than doubled. In a global environment of increasingly volatile fuel prices, emerging technologies, and climate-change impacts, the continued increase in demand presents challenges and opportunities to Latin America and the Caribbean. To manage the next phase of development, the region’s governments will need to develop new energy sources and pay more attention to sustainability.

By some measures, Latin America is already ahead of the game. The region has a low carbon footprint due to the large share of hydropower in its energy mix. Hydropower can’t be expanded indefinitely, however, and proposed mega-dams in countries such as Chile and Brazil have generated protests from indigenous and environmental groups.

Developing alternative forms of sustainable energy will require focused effort. Challenges include the inflexibility of the region’s grid systems, the difficulty of siting new transmission lines, and the political and technical problems inherent in serving politically disconnected and geographically remote populations. Using examples from Chile, the Caribbean, and Nicaragua, we present energy technology and policy-design tools being developed at UC Berkeley’s Renewable and Appropriate Energy Laboratory (RAEL) that address Latin America’s sustainability and development needs.

Analyzing the Feasibility of Renewables: Chile

Chile faces challenges on many fronts as it struggles to meet increasing energy demand. Large, centralized, and disruptive projects are being successfully challenged in court. The cumbersome regulation of the transmission sector has slowed down investments, which are not keeping pace with generation capacity expansion and demand. Faced with these challenges, the government is relying on private operators to choose coal as the “safe” way out of the current crisis. Continuing with this strategy would require that imported coal be used to supply up to 75 percent of the country’s energy over the next two decades, quadrupling current emissions by 2031. There’s still uncertainty, however, about whether unpopular coal-fired power plants will also become mired in controversy. Meanwhile, calls for renewable resources are silenced by a pair of dogmatic arguments: they are too expensive, and they are not “baseload,” or available continuously. Therefore, they can only play a marginal role. 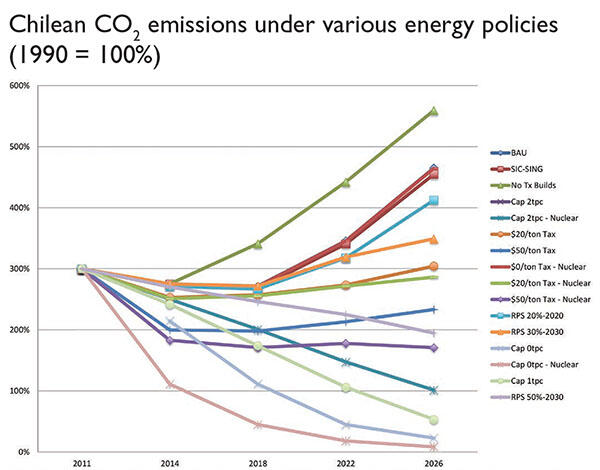 At RAEL, we have developed a Chilean version of the lab’s Switch model to tackle these arguments. Originally designed for the western United States, the Switch model identifies cost-effective investments for meeting electricity demand, taking into account the existing grid as well as projections for future technological developments, renewable energy potential, fuel costs, and public policy. Switch is designed to allow decisionmakers to balance intermittent renewable resources with reliability requirements when planning the expansion of the electricity system.

Our results indicate that Chile can choose a growth path that cuts its emissions in half while only increasing wholesale electricity prices by about 2 percent or roughly $3 per megawatt hour. The benefits from the low-emission path — which include reduced pollution, less dependence on imported fuel, and newly created jobs — would more than offset the small increase in cost.

Rather than prescribing specific investment decisions, Switch results should be used to frame a discussion about what kind of future the country wants and how it should go about pursuing that future. The figure above was generated by running multiple scenarios with Switch-Chile in which we examined the impacts of carbon cap and carbon tax policies, transmission-building restrictions, and the deployment of nuclear power, among other possible scenarios. The results show that the country can choose among several growth paths that have very different emissions and sustainability outcomes for roughly similar costs. These alternatives merit close examination since their societal impacts differ so substantially. Building the institutions necessary to decide between these options will be critical to shaping a more sustainable future at the local, national, and regional levels. 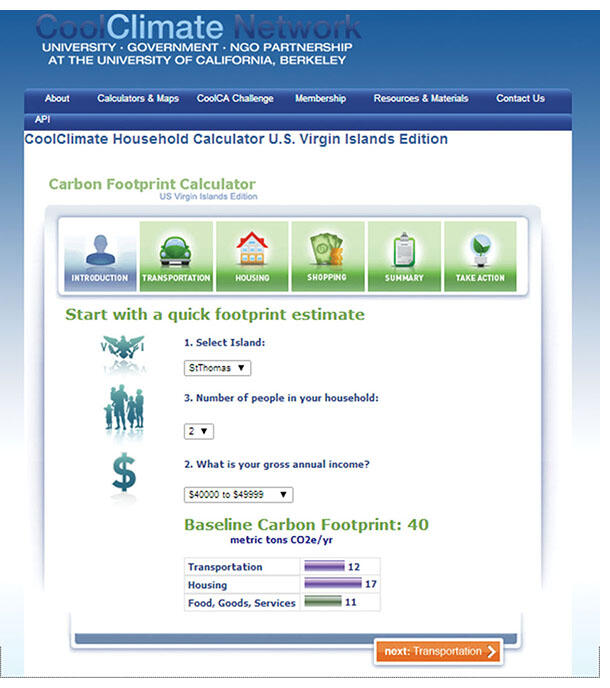 Most Caribbean islands depend almost entirely on petroleum products to supply their current electricity demands, and oil imports represent a significant proportion of total spending. Even in U.S. territories such as the U.S. Virgin Islands (USVI) and Puerto Rico, retail electricity rates are high: as much as 35 cents per kilowatt-hour compared to average rates of about 12 cents per kilowatt-hour in the continental United States. While many islands — including Jamaica, Barbados, and several eastern Caribbean countries — are planning and deploying small-scale renewable energy installations, there are significant barriers to widespread adoption. In the Caribbean, core issues include economies of scale, aging and inflexible grid infrastructure, access to capital, risk management, monopoly utility ownership, and a lack of enabling legislation that supports the industry. RAEL has been working on the policy front in both the eastern and western Caribbean by quantifying the co-benefits of moving toward renewables, which include reduced carbon emissions, new jobs, energy security, and improved access to energy for remote populations.

In 2010, John de Jongh, the governor of the U.S. Virgin Islands, pledged to cut fossil fuel use 60 percent by 2025. To help meet that goal, he signed an agreement with the U.S. Department of Energy to create a clean energy development strategy for the territory. RAEL contributed to this effort by creating a carbon calculator that identifies opportunities for energy conservation and efficiency. To create the calculator, we first used local census and household survey data to find out how much people spend on utilities, transportation, food, and other goods and services. We then estimated how much carbon is emitted throughout the lifecycle of the various products islanders use. Our findings show that the average per capita carbon footprint in the territory is about 13 tons of carbon dioxide equivalent per year, roughly 35 percent less than in the United States. In the USVI, electricity is the major contributor to emissions, despite the fact that annual household electricity use is three times less than in the continental United States, where transportation is the major carbon contributor. In fact, the carbon impact of utility services in the USVI is almost double the global average. Utility efficiency is therefore key to reducing emissions on the islands.

To understand the impact on jobs per unit of electricity delivered, we also developed a green jobs estimator for the USVI that has since been adapted for many other islands. The model is based on direct construction, installation, and maintenance jobs as well as indirect (non-energy sector) job multipliers for different energy resources. We found that if efficiency and renewable energy deployment were to account for a 60-percent reduction in fossil fuel electricity by 2025, more than 800 jobs could be created. The majority of these green jobs would come from energy efficiency: workers would be needed for retrofits and to service energy-efficient appliances. These jobs would include everything from carpentry to landscaping to sheet-metal working. The carbon calculator and the green jobs estimator are two simple yet effective tools that support the planning process in the region and serve to highlight issues other than per unit energy costs in the policy conversation.

In the next few decades, Nicaragua’s ability to fulfill its development potential will be tightly linked to the long-term sustainability of its energy system. Over the past 20 years, Nicaragua’s gross domestic product (GDP) and its national energy consumption have grown at 4.4 percent and 5.7 percent per year respectively. Today, oil accounts for over 80 percent of all energy imports, and more than 55 percent of Nicaragua’s export revenue goes towards oil, dwarfing investments in education and health. For a country that, despite strong growth, still holds the 129th position in the United Nation’s Human Development Index, such an expenditure of precious resources comes at great cost to development. Furthermore, the World Bank forecasts that Nicaragua is one of the countries most at risk from climate change due to future extreme weather events, so a continued reliance on highly polluting bunker fuel is not in the country’s long-term best interest.

Recently, Nicaragua has developed a vision to reduce its dependence on imported fossil fuels and become a regional leader in renewable energy. The government has set ambitious goals for sustainable energy development, and Nicaragua is now cited as the second-most attractive country in the hemisphere for renewable energy investment. However, the country’s vision lacks detail, legal obligations, and concrete measures for implementation. Although a complete change in the nation’s energy mix has been proposed — the goal is to reach 79-percent renewables by 2017 and 93 percent by 2026 — the country is far from hitting those targets.

In Nicaragua, RAEL researchers are pursuing both top-down and bottom-up strategies for sustain-able energy development. Through the use of energy modeling and appropriate technology at both the urban and rural levels, we plan to develop rapid-implementation strategies for making Nicaragua’s renewable energy goals a reality.

The development of Switch-Nicaragua is the central component of our top-down strategy. The model, which we are working on with colleagues at the Universidad Nacional de Ingeniería, identifies energy investments that would minimize system-wide CO­2 emissions while reliably meeting demand.

Our bottom-up approach is to develop a low-cost but highly effective micro-grid in either the capital city of Managua or in the Wawashang Nature Reserve on the Atlantic Coast. The micro-grid would be built in partnership with local renewable-energy entrepreneurs and would serve as a demonstration model that shows how decentralized smart-grid applications could work. The main idea is to depict how decentralized energy systems can both reduce the country’s oil dependence and provide reliable energy access. The decentralized electricity generation provided by micro-grids is particularly important in Nicaragua, where more than 20 percent of the country remains largely unelectrified due to the difficulty of supplying power to remote villages. Installing decentralized generation that is both sustainable and renewable would show communities that there are cleaner and cheaper alternatives to the diesel-powered generators on which they currently rely. 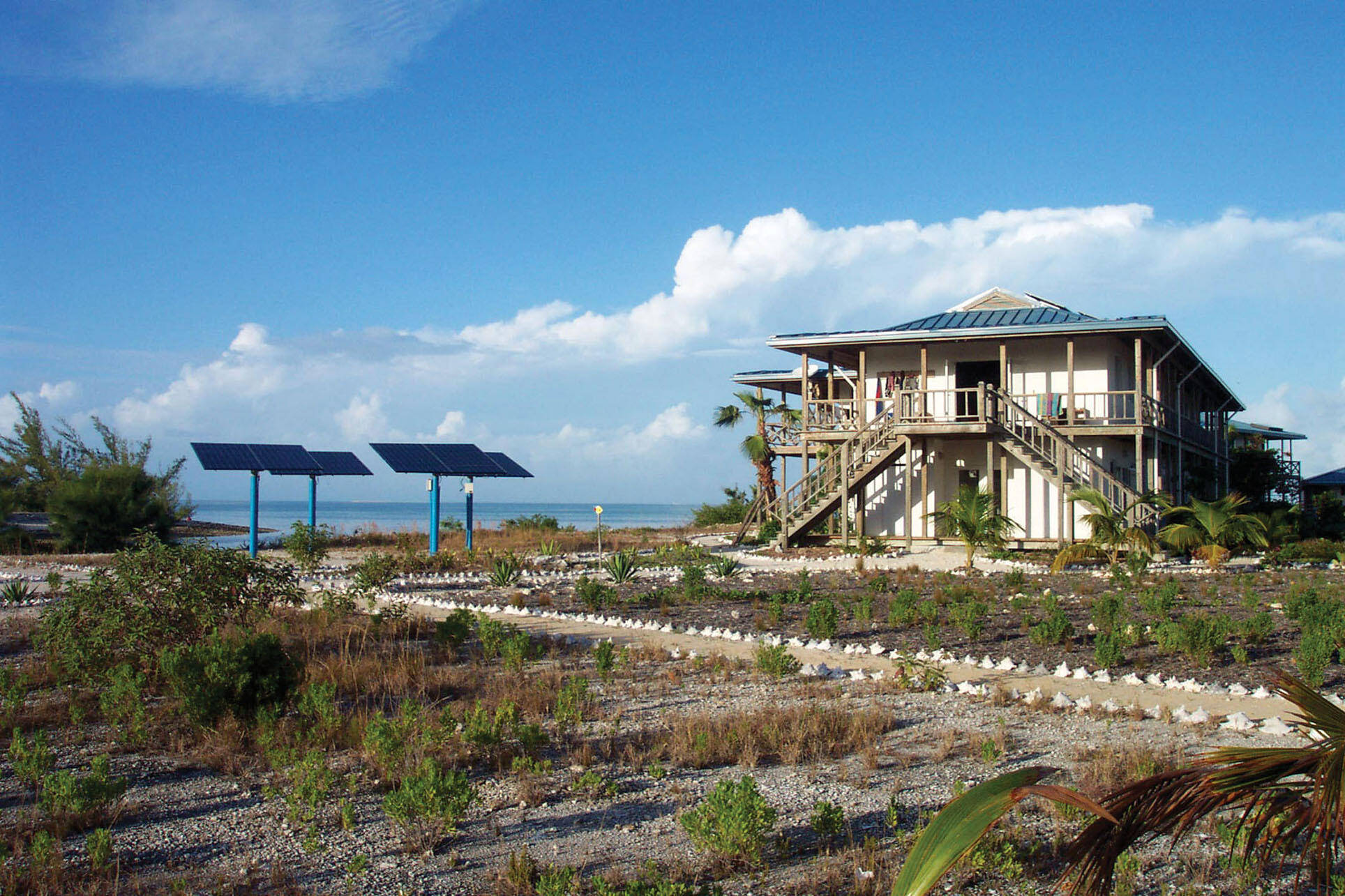 New advances in renewable energy technologies, demand-side resources, and energy efficiency are challenging the way we think about providing energy services. As we have shown, these innovations have many benefits compared to a paradigm based on supply-side, centralized systems. New jobs, a reduced carbon footprint, greater energy security, and improved access to electricity are just a few of the benefits of distributed, sustainable energy systems. While complex models like Switch can help clarify the costs and feasibility of developing cleaner power systems, they should be used to support democratic deliberations on how nations and regions should grow in a sustainable way. Furthermore, both bottom-up and top-down modeling approaches are necessary to provide a holistic analysis of the energy service needs of urban and rural areas, particularly in developing eco-nomies. Thus, a systems approach to quantitative analysis will be critical to informing sound energy policy in the coming decades. RAEL’s approach integrates environmental, technical, social, and cultural factors in an effort to advocate for democratic and pluralistic public and private decisions about energy.