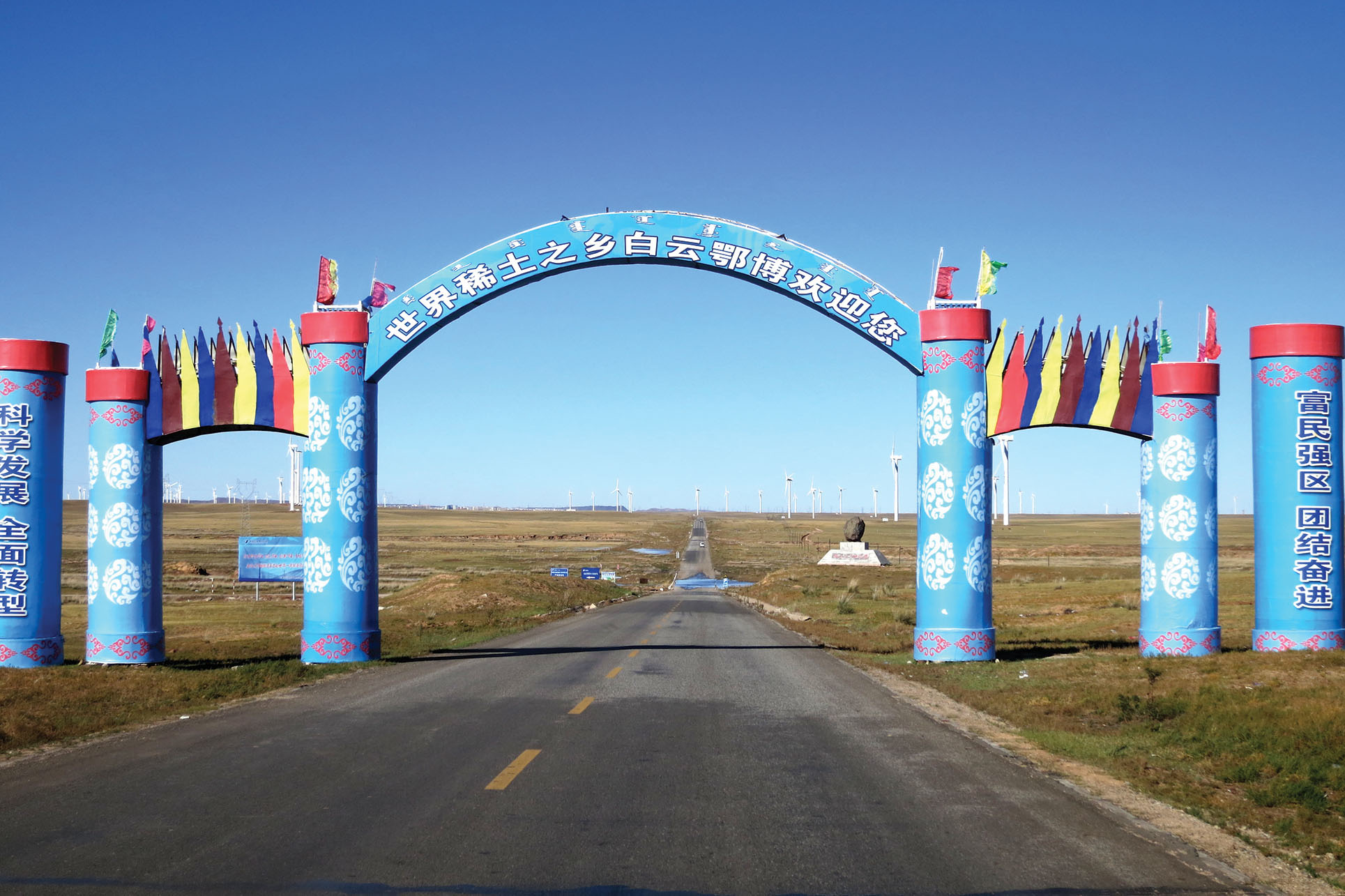 From the freshly paved highway, Bayan Obo looks like much of the Mongolian Steppe: gently rolling grasslands, rocky soils, mountains in the distance. There are occasional herds of horses, sheep, or goats and the adobe homes of their keepers. Some small mining operations are visible from the road. Mounds of coal, shale, and gravel line two-lane tracks in the dirt, awaiting pick up. Giant wind turbines spin slowly, outlined against the dusty, gray horizon.

The source of the dust becomes clear the moment the bus tops the last, small hill, just south of town. A wide valley of scrub grass gives way to orderly clusters of freshly painted apartment blocs centered against the rise of a massive series of open-pit mines that stretch east to west for several kilometers. These mines are the source of more than half the world’s supply of rare earth elements, which are essential to the technological infrastructure of modern life.

The term “rare earths” refers to 17 chemically similar elements possessing exceptional magnetic and conductive properties. Adding them to iron or nickel creates the durable alloys used in oil pipelines, nuclear reactors, and jet engines. Rare earths are necessary to produce the powerful magnets used in maglev trains, drones, computer hard drives, and wind turbines. They act as amplifiers in the fiber-optic cables essential to global internet communications and are used in the imaging technologies of satellites, MRI machines, and televisions. Smart phones, hybrid vehicles, and flat-screen monitors all require some rare earth elements. The list goes on.

Bayan Obo looks quite different from most frontier mining towns in the Americas. Although it is a small, remote place, it is hardly the ramshackle desert outpost some have fancifully described. Banners and sculptures along the main roads welcome people to the “Hometown of Rare Earths,” where well-kept avenues are illuminated entirely by renewable energy sources. The local, state-owned mining company is responsible for providing housing, hospitals, schools, and recreational facilities for its employees and their families; other local firms and government offices follow suit to attract officials and skilled labor. But despite these tidy appearances, the heavy metals, fluorine, and arsenic accumulated in the town’s soil and water from decades of mining have slowly poisoned nearby residents and their livestock. Some true locals are tragically recognizable by their blistered skin and discolored teeth, indicating severe chronic exposure to arsenic leaching out of the mine. 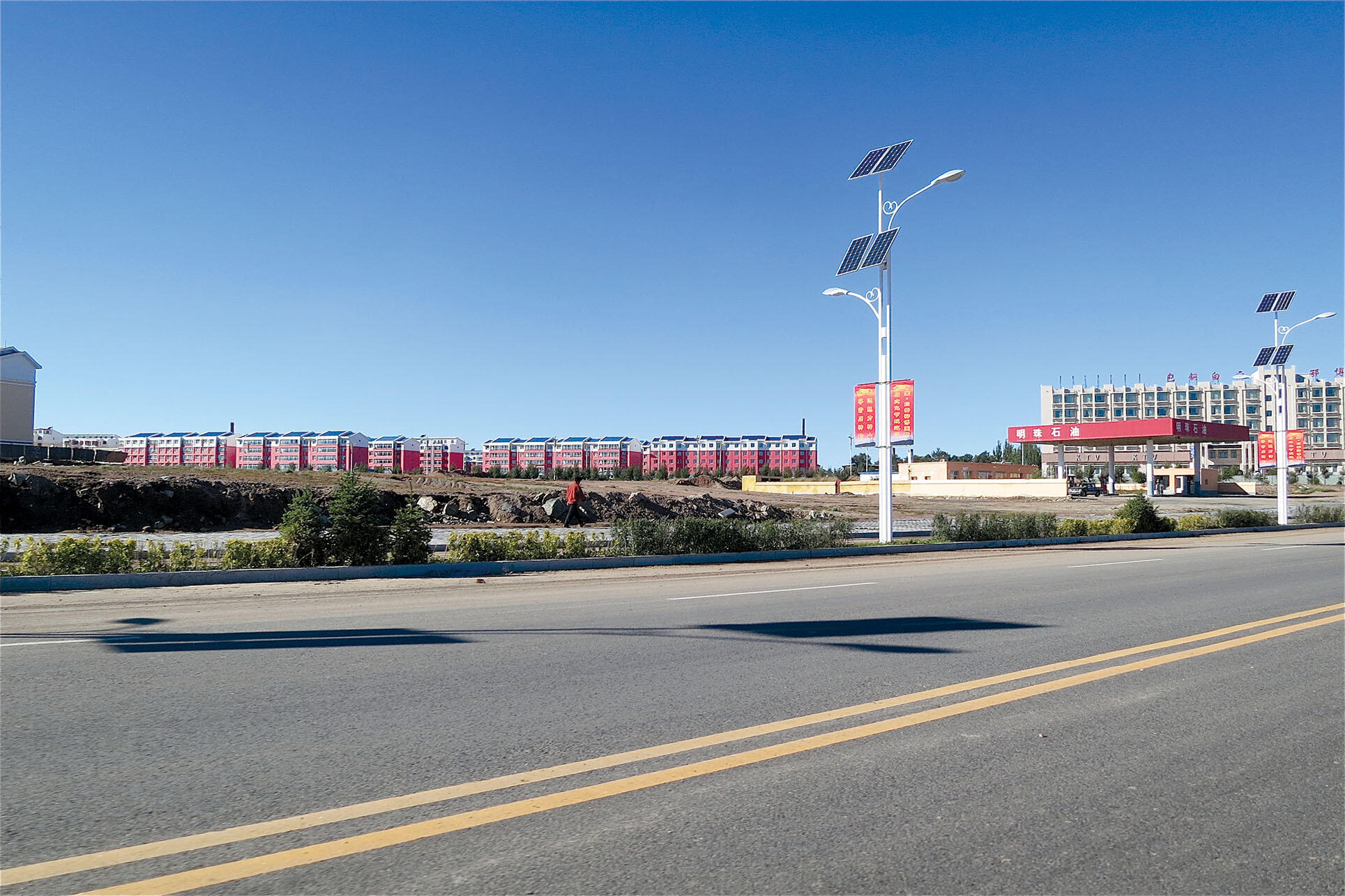 China’s recent steps to curb environmental destruction and slow resource depletion by enforcing production quotas were met with alarm from the rest of the world. The United States, the European Union, and Japan brought two unsuccessful World Trade Organization (WTO) suits against China in an effort to force the government to relax its quotas. In both cases, the WTO ruled in favor of China, citing that under Article XX of the General Agreements on Tariff and Trade, member states are permitted to limit natural resource exploitation for reasons of environmental protection or critical resource scarcity. But in November 2013, after 18 months of deliberation, a WTO special panel ruled in favor of the United States, the EU, and Japan on the basis that China failed to demonstrate that the export quotas were necessary to alleviate critical environmental harm or resource shortages.

Viewed from Bayan Obo, China’s environmental case for scaling back production actually seems understated. One local scientist commented that those hoping for a WTO victory against China are missing the fact that sustaining the global supply of these resources is less important to China and neighboring countries than stemming the tide of toxic and radioactive waste contaminating extensive reaches of Inner Mongolia, including the Yellow River watershed upon which nearly 200 million people rely for drinking water, irrigation, fishing, and industry. A week after the WTO ruling, China’s Ministry of Commerce released rare earth production quotas for 2014, which indicates that Beijing will most likely appeal the decision.

Because rare earths are so thoroughly embedded in modern life, it is likely that mining will continue to expand outside China regardless of the final outcome of the WTO suit. There is too much at stake in terms of national security and economic stability to rely overwhelmingly on one producer, especially when there are, according to the United States Geological Survey, nearly 800 potentially minable sites across the globe. Their strategic and economic value has prompted several national governments in the Americas to promote rare earth mining on their soils, including in some remote reaches of the Western United States and the Brazilian Amazon. 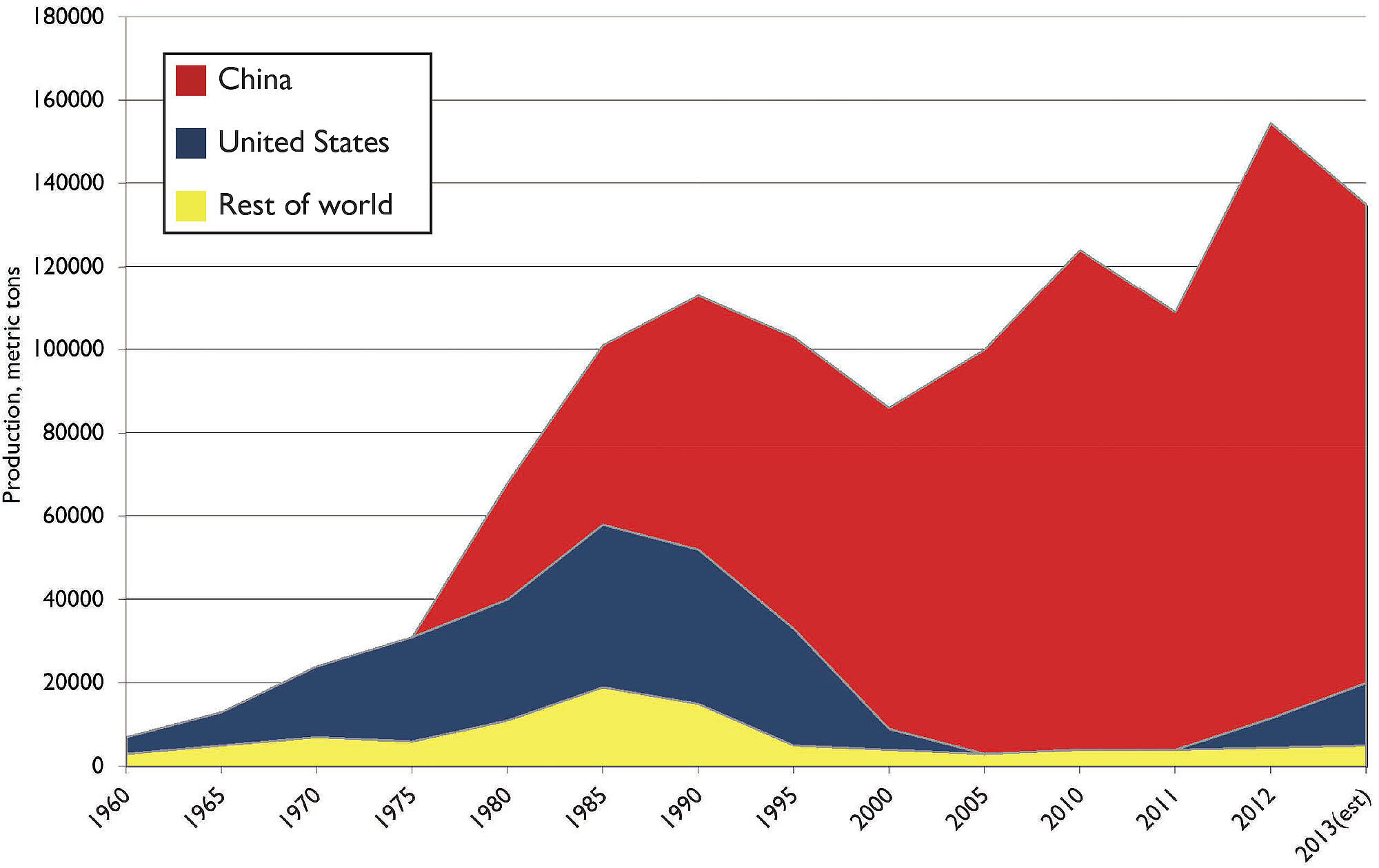 But it is not enough to locate new mining sites in remote or sparsely populated areas. Such places are seldom as sparsely populated as government reports claim: officially, there have been no farmers or herders in Bayan Obo for decades. The story is that they have all been resettled or found other employment opportunities elsewhere. At first glance, this seems true. The only rural houses visible in the vicinity of the rare earth mine are abandoned. Only after traveling several kilometers away did I encounter an elderly herder, in a village built around a small, protected spring. He explained that Bayan Obo used to belong to Mongolian nomads, and the site of the famous mine was once a sacred mountain in local religious lore. Even as the mine expanded, nobody wanted to leave, but “first the animals got sick, then the infants, and then everybody else.” Ultimately, they had no choice.

Yet some herds can still be seen among the wind turbines, and hoof prints mark the silty, sparkling mud around the tailings ponds. Although grazing is technically illegal in Bayan Obo, it is clear that some households have no choice but to continue the practice. The local government has tried to compromise with a few remaining families along the highway by implementing a local eco-tourism initiative. Herders received some subsidies to build concrete huts around their dwellings, sculpted and painted to look like yurts, the iconic round tent of Mongolian nomads, which they advertise as an “Authentic Mongolian Eco-Tourism Resort.” A visit to a few of the proprietors revealed that there isn’t enough tourist traffic for them to break even on their investment, much less make a profit. So, they returned to grazing animals, even though they are aware of the pollution and view sickness as an inevitability. They prefer the risk to the life of a day laborer working on the margins of a far-off, big city. 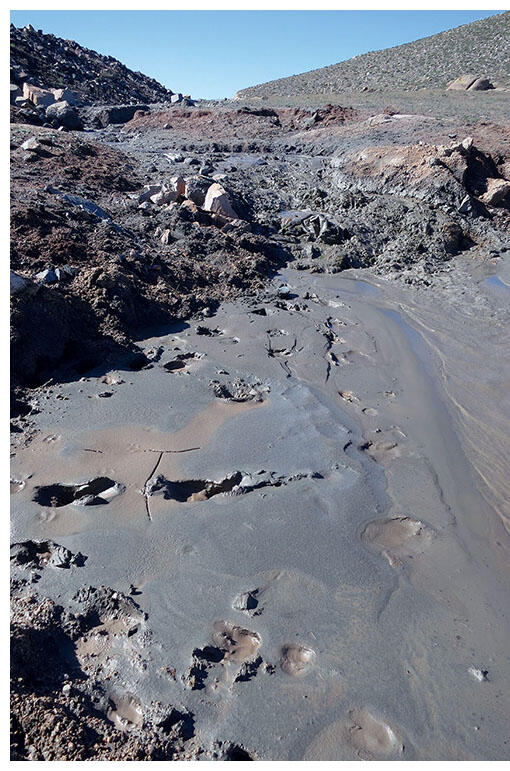 The common ailments, in local parlance, are “Long Tooth Disease” and “Snake Disease,” otherwise known as fluorosis and chronic arsenic toxicity. Livestock suffering from fluorosis grow long, brittle teeth that hinder their grazing to the point that they eventually starve to death. Its counterpart in humans is debilitating skeletal fluorosis, which deforms the joints, long bones, and spinal column and causes muscle shrinkage, which eventually tears the ligaments. Snake Disease refers to the discolored scaling that occurs on the hands, feet, faces, and genitals of people with severe arsenic poisoning.

The toxicity of the land and its epidemiological consequences have been closely monitored by local environmental and public health bureaus for decades, but exact data on the history and extent of the diseases are considered too sensitive for public disclosure. There have been plenty of studies analyzing the heavy metal content of the soils in the grasslands surrounding the mine, but most are only available in Chinese print journals. Although many of the academic studies have escaped censorship, there is some hesitation to translate them into other languages because of nationalist sensitivities: any negative news reported internationally is viewed as “criticism of China,” even though full disclosure of the health and environmental cost is the first step toward constructive international dialogue on the problem. This secrecy — and what might be called misplaced nationalist pride — has some unintended and unfortunate consequences.

The first consequence is that there is little understanding internationally of the true human cost of rare earth mining, which precludes a discussion on how to avert similar catastrophes elsewhere. The second is that the outside world has often mistaken the paucity of English translations as mere secrecy, and mistaken secrecy for a lack of environmental monitoring, regulation, and remediation in the area. This speaks to the third and most significant consequence, which is that the hundreds of millions of renminbi committed by the central government to local environmental remediation programs, the long-established teams of dedicated specialists working on public health and environmental problems associated with mining-related pollution, and most importantly, the outcomes of their efforts are simply not known because they are generally not publicized beyond specialized, Chinese-speaking audiences.

Secrecy around acute environmental toxicity is hardly limited to China: governments and industries across the global rare earth frontier make various attempts to hide or to minimize the complex problems generated by rare earth mining and processing. While local experts in polluted regions around the world are coping with common problems, they appear to be toiling in isolation. The risk is that solutions discovered in one place may never be shared with the outside world. Amidst the divisive politics of the latest WTO case, rare earth mining-ready countries in the Americas may be missing a crucial opportunity to learn from China’s long experience observing, documenting, and attempting to manage this dangerous yet necessary enterprise.

Because of their relative abundance and strategic value, sourcing rare earths closer to home simply makes good political and economic sense. But the poisoned soils and radioactive water in rare-earth-producing regions old and new serve as constant reminders of the perils involved. A truly strategic rare earth policy in the Americas begins with an ongoing commitment to monitor, report, and remediate the intractable environmental and human costs associated with rare earth mining and processing while pursuing international cooperation to find better practices. Minimizing the costs of rare earths mining will not be easy. But if mining-ready regions in the Americas fail to enlist the expertise and accumulated knowledge of China’s local specialists, we risk recreating Bayan Obo’s tragedies in our own backyards.

Julie Klinger is a Ph.D. candidate in the Department of Geography at UC Berkeley. 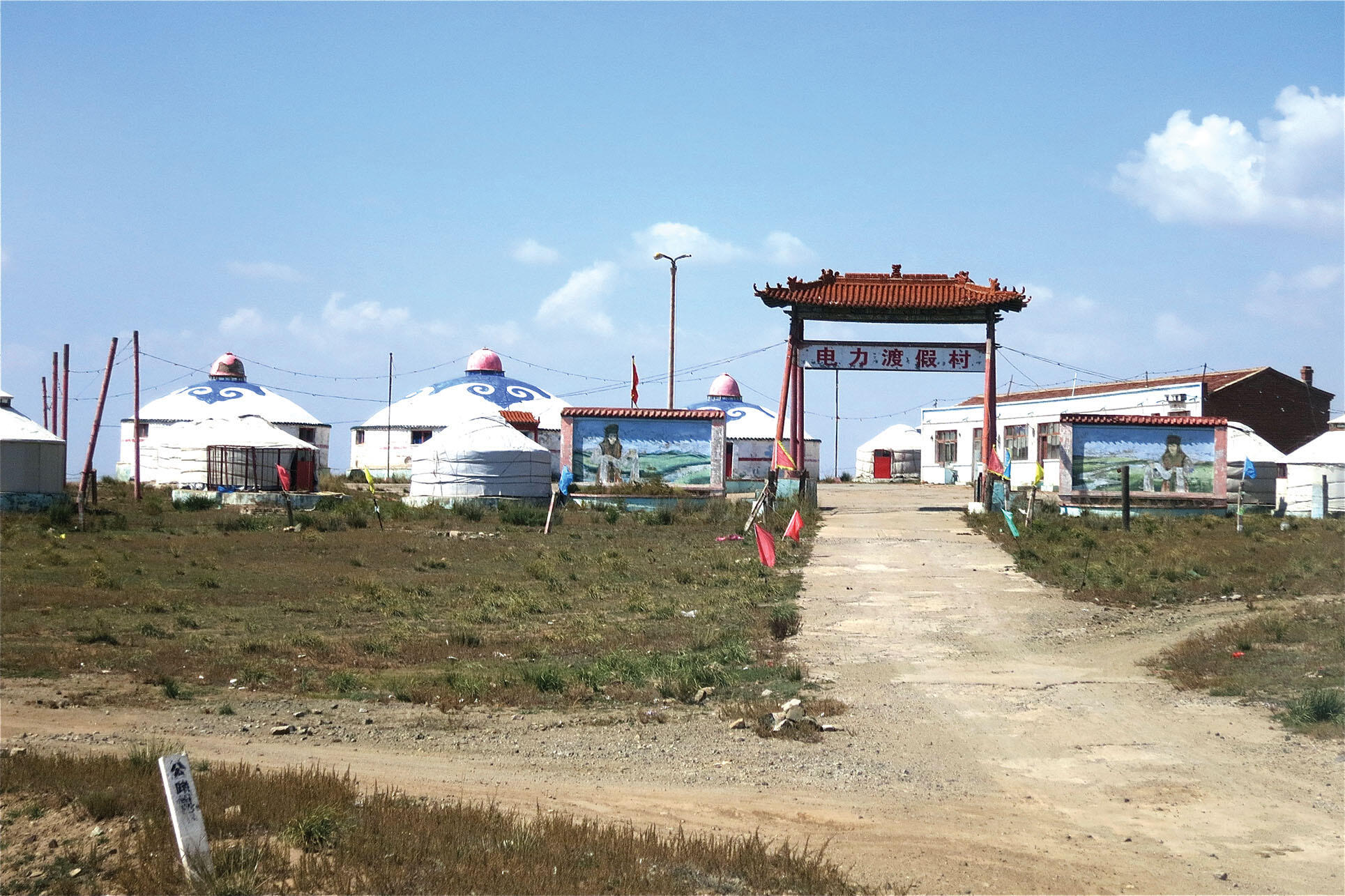