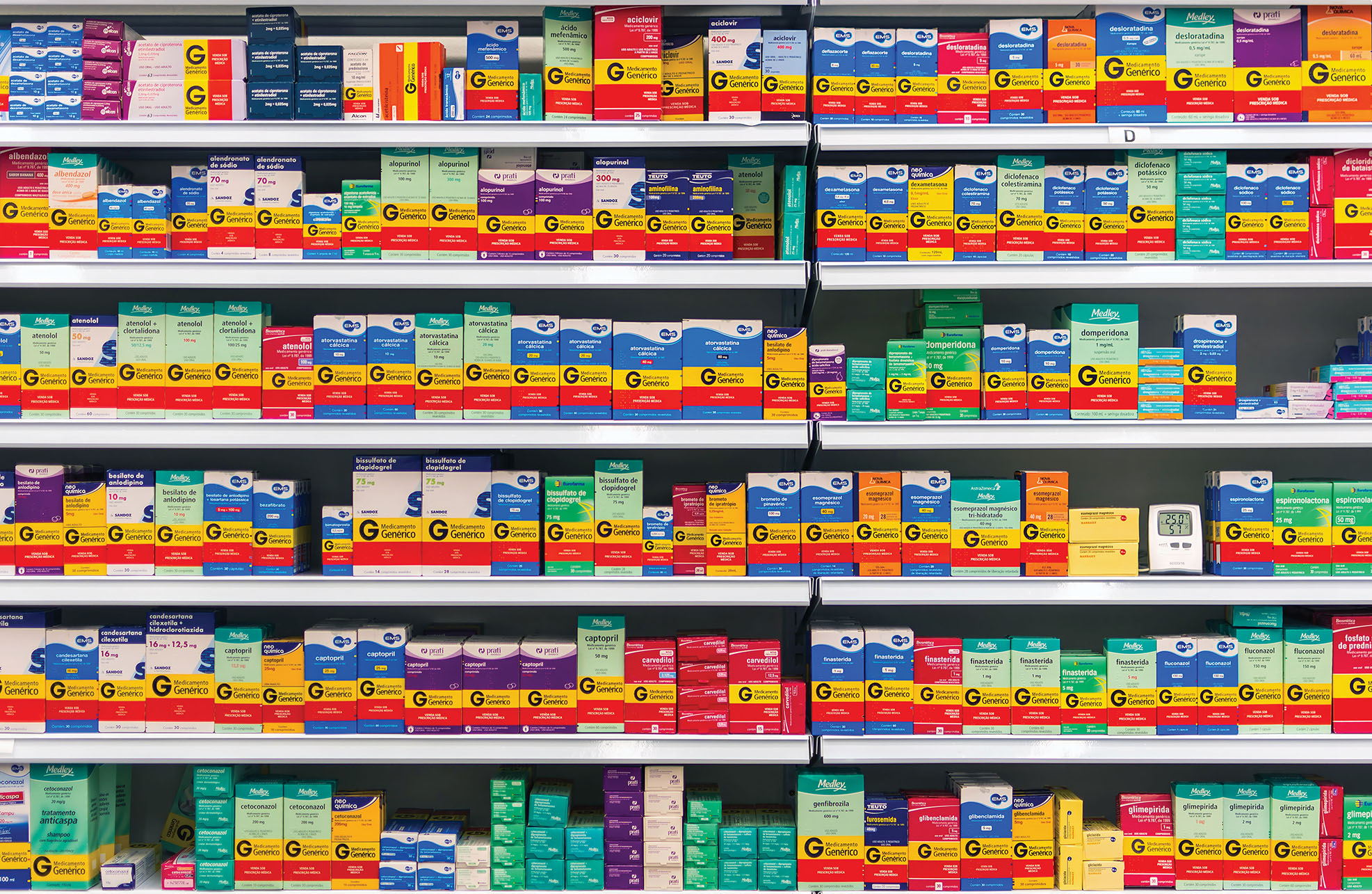 Over the past 20 years, one of the key health policy agendas in Latin America has been the coordination of drug regulation. Since 1997, the Pan American Health Organization (PAHO) has periodically gathered national regulatory authorities to discuss how to harmonize practices of pharmaceutical regulation in the region (Pan American Health Organization, 1997). The Pan American Network for Drug Regulatory Harmonization (PANDRH), 1 founded in 1999, has been critical to defining and strengthening good regulatory practices and facilitating the trade of pharmaceutical products.

Likewise, efforts to improve drug regulation continue at the national and regional levels. In May 2018, Brazil hosted representatives from regulatory authorities, international organizations, the pharmaceutical industry, and other stakeholders, who met to discuss these concerns at the conference entitled “Global Regulatory Convergence: Opportunities and Challenges.” 2 Despite these longstanding and ongoing efforts to align national practices, however, we still witness profound divergences among countries, which motivates our research examining differences in national policies to promote and regulate generic drugs in Latin America.

The rationale for generic drug promotion is simple: once a patent expires, generic drug manufacturers can enter the market, and the competition created by the entry of additional suppliers will cause prices to drop. An immediate challenge to studying this process, however, is the need to define these products in the first place. Some countries do not use the term “generic drugs” at all, but call them “similar drugs,” which can range from products that are demonstrated to be biologically equivalent to the originator drug (with or without a brand name), to those that are a fairly equal copy but potentially with different absorption rates in the body (likewise, with or without a brand name). The resulting cacophony of labels — “generics,” “branded generics,” “similar drugs” — is a recipe for confusion.

Further complicating matters is the difficulty of identifying reference products. Again, we typically think of generics as entering the market after patent protection has expired, but in Latin America, patents on drugs are a fairly recent development compared to the Global North. Countries in our region began granting patents in the mid-1990s or early 2000s, as a response to their commitment to the World Trade Organization’s agreement on intellectual property. Therefore, the reference product used for comparison is not always the innovator drug, but the product that was the first to receive local market authorization or even the product that is the market leader in that country.

Our first step was to map how countries define their pharmaceutical products. PAHO has produced relevant reports, and some academics have also worked on this task (Homedes & Ugalde, 2005; Pan American Health Organization, 2008; Tobar, 2008). However, because many of these previous efforts were undertaken more than 10 years ago, the information was outdated when we began our research. These circumstances required us to dig deeper into the websites of various national regulatory authorities in our search for drug registration requirements and resolutions.

This investigative stage revealed a profound challenge: understanding the technical requirements that pharmaceutical companies must use to register a drug in a country when the product in question is not the original medicine (i.e., the first version of the drug to be put on the market). An emerging international norm is the requirement that all non-original (or “follow-on”) drugs demonstrate equivalence to the original products. Bioequivalence and bioavailability tests show, respectively, that one drug can be substituted for another and that its effects and absorption in the body are the same. However, not all countries require bioequivalence to register “follow-on” drugs, which have a chemical structure or mechanism of action similar to the original drug. Some countries only require bioequivalence for a list of specific products, while others require it for all non-original products. And this is the perfect instance where technical requirements, politics, and markets collide.

In Brazil, where our in-country research has progressed the furthest, the introduction of bioequivalence requirements raised heated debates between government agencies and local pharmaceutical producers. In the words of a Brazilian executive, “local producers prefer simplicity.” Demonstrating bioequivalence can be expensive; it requires lengthy and costly adjustments to manufacturing practices and plants. In the late 1990s, many local producers in Brazil refused to accept this additional cost burden, but theirs was a lost battle. 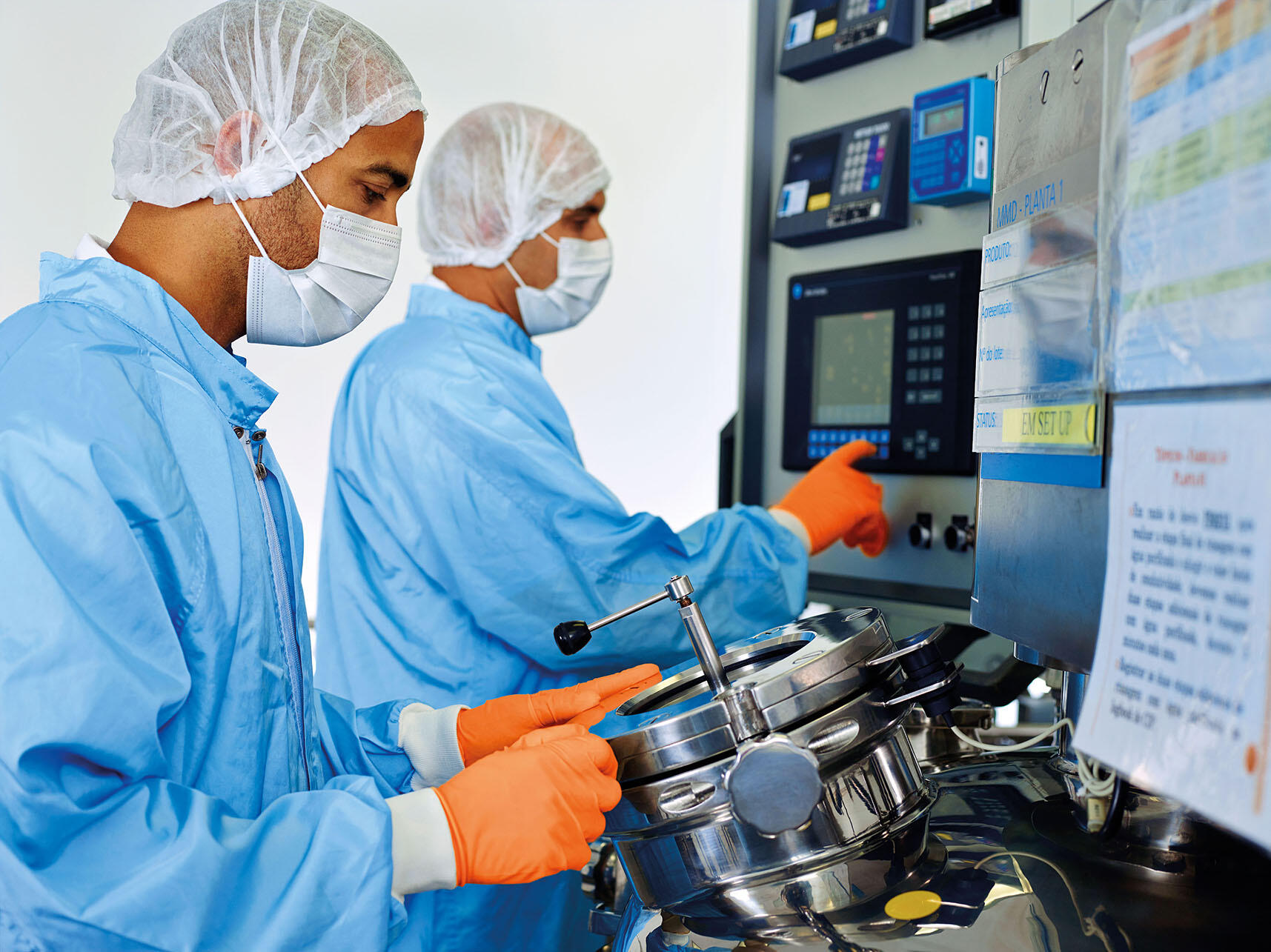 Backed by the unwavering support of the Ministry of Health, the Brazilian Congress ruled in favor of bioequivalence requirements after a scandal in which dud birth control pills resulted in unwanted pregnancies for many women. Although local drug companies were not at fault — the ineffective drugs were linked to a transnational company — this case shed light on the mismanaged (and at times corrupt) state of health surveillance in Brazil. The scandal cast drug regulation into the limelight. The public eye focused on an issue usually restricted to specialized circles and discussed only behind closed doors. The outcome was the creation of an independent regulatory agency, the Agência Nacional de Vigilância Sanitária (ANVISA, Brazilian Health Regulatory Agency) and a new regulation process for non-original products that defined generic drugs, mirroring American and European norms. It was a whole new world for Brazilian drug producers. They could either adapt — with a 10-year grace period for full compliance — or they could exit the market.

Several Brazilian drug companies adapted to the new regulation, becoming market leaders in this highly competitive sector. The country’s regulatory agency is now a model for other Latin American countries. This story inspired us to start our project in the first place. If bioequivalence is so important, why do other countries only require it for select products? Is bioequivalence actually necessary for generic drug regulation? We are currently conducting fieldwork in Argentina and Mexico to explore how these countries approach such issues.

However, technical requirements are only one part of the story. Generic drug regulation also entails informing consumers and prescribers about the importance of drug substitution. We encounter additional challenges in this regard.

Drugs are usually known as and sold by their commercial names, not just their chemical names. For instance, Tylenol is a brand name of paracetamol (an analgesic known as acetaminophen in the United States). The commercial (or brand) name is at the discretion of the pharmaceutical company, which often opts for terminology that fits their marketing interests and context. Chemical names, in contrast, are generally determined by national nomenclature commit-tees, often supported by a World Health Organization committee that selects the name for the active substance, known as the international nonproprietary name (INN) or simply the “generic name” (World Health Organization, 2010).

If all drugs were commercialized by standardized chemical names, one could more easily shop for the lowest-priced paracetamol, for example, regardless of the producer. Of course, drug firms typically resist this sort of commodification: the brand name is part of the commercial strategy and helps build trust in the product and the company. It also shifts marketing strategies away from the final end of the production chain (the pharmacy) to the physician’s office. Needless to say, drug companies employ a wide range of tactics to influence prescribers, from free samples, to visual aids, to support for confer-ence participation.

Where do politics and regulators come in? If there is one thing that can mobilize the interests of local and transnational producers around a common agenda, it is the possibility of having governments interfere in their use of brand names. Chile has attempted to promote changes in the font size of the names of branded drugs in order to highlight the generic name and facilitate drug substitution. This initiative is being challenged by both the Asociación de Productores Locales de Medicamentos (Association of Local Drug Producers) and the Cámara de Innovación Farmacéutica de Chile, the trade association of transnational pharmaceutical companies in Chile. Among other things, they argue that this simple change in packaging and presentation could harm local industries, violates intellectual property rules, and would be difficult to comply with because of the difficulties of fitting several INNs on the same package (Cooperativa, 2017). We find similar situations in other countries throughout the region, including Brazil and Argentina. 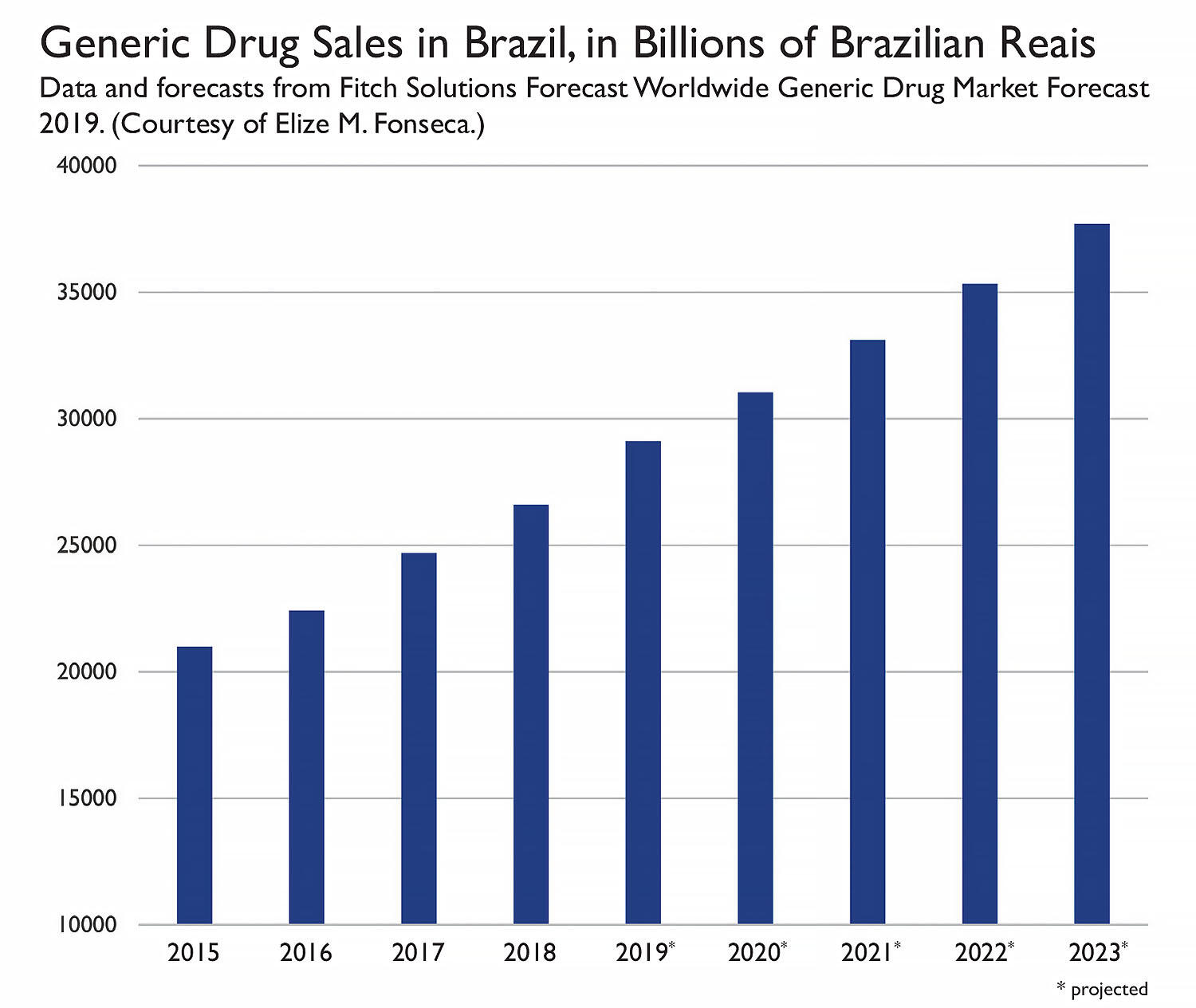 The medical societies or associations are another relevant actor in this process. To boost demand for generic drugs, regulators can require physicians to prescribe using the chemical name. However, medical associations can be a powerful interest group, and they do not want interference in their prescription practices. In Brazil, controversies developed with regard to whether or not the regulatory agency could interfere in the practice of prescription selection. After much debate, it was agreed that physicians working in the public sector would be mandated to prescribe via INN, while private doctors would maintain their discretion in prescribing by INN or brand name (Fonseca & Shadlen, 2017).

At times, the pharmaceutical companies even agree with the medical associations. For instance, in 2017 a deputy in the Argentine Congress proposed an amendment to the Generic Drug Law that mandated the use of INNs for all prescriptions. This policy decision was strongly opposed by both local and transnational firms and eventually rejected (La Política Online, 2017).

In sum, promoting and regulating generic drugs requires the establishment of new rules that have stark distributive impacts. As a result, this process is an intensely political and far more complicated endeavor than implied by technical guidelines to stimulate supply of and demand for generics. Our study focused originally on three policy dimensions that allow for cross-national comparison: the demonstration of therapeutic equivalence; drug prescription and substitution; and pharmaceutical packaging and labeling. After mapping out nine Latin American countries examining these criteria, we are now embarking on political economy analyses of Argentina, Brazil, and Mexico to understand the differences observed. For this task, we will be looking into political interactions among state health officials and regulators, pharmaceutical industries, and medical communities within each of these policy instruments.

International organizations have recently acknowledged the need to strengthen pharmaceutical systems in developing countries, which is an important advancement compared to previous efforts that largely ignored the institutional capacity of these countries in regulating pharmaceuticals — as if these rules were to be implemented in an institutional vacuum. No matter how relevant international technical standards are, they will be filtered by domestic institutions and their political actors. Our study represents the first step toward building not only a conceptual understanding of how different generic drug regulations work, but also a practical understanding of how best to compare countries’ approaches to generic drug regulation.

Elize Massard da Fonseca is Assistant Professor of Public Administration at the Fundação Getulio Vargas in São Paulo, Brazil, and was a visiting scholar at the Center for Latin American Studies in 2019. She spoke for CLAS on February 28, 2019.

Ken Shadlen is Professor of Development Studies in the Department of International Development, London School of Economics (LSE). He holds a Ph.D. in Political Science from UC Berkeley. 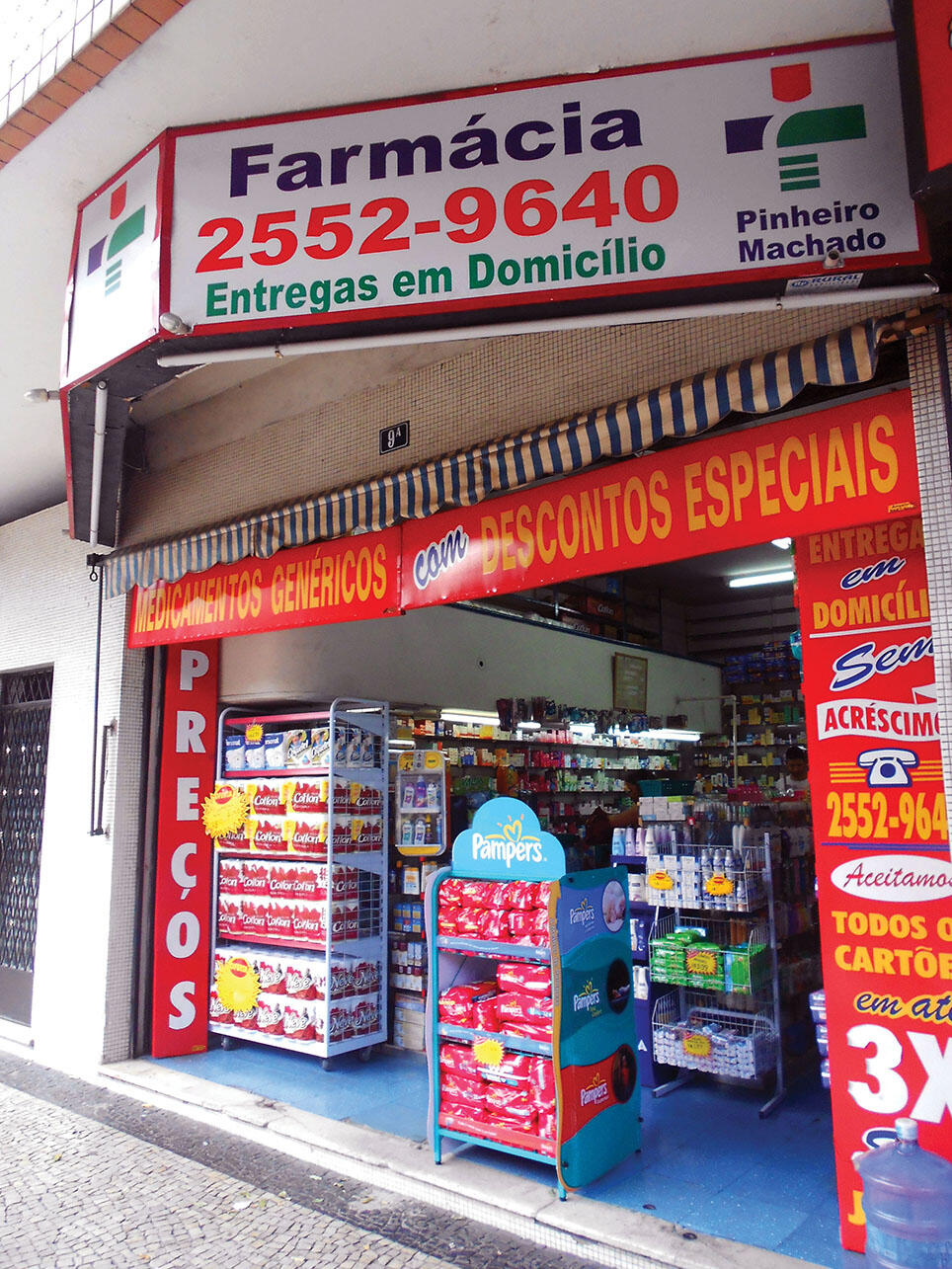