LANGUAGE: Niahciz, I Will Arrive: A Song for the Future From the Past 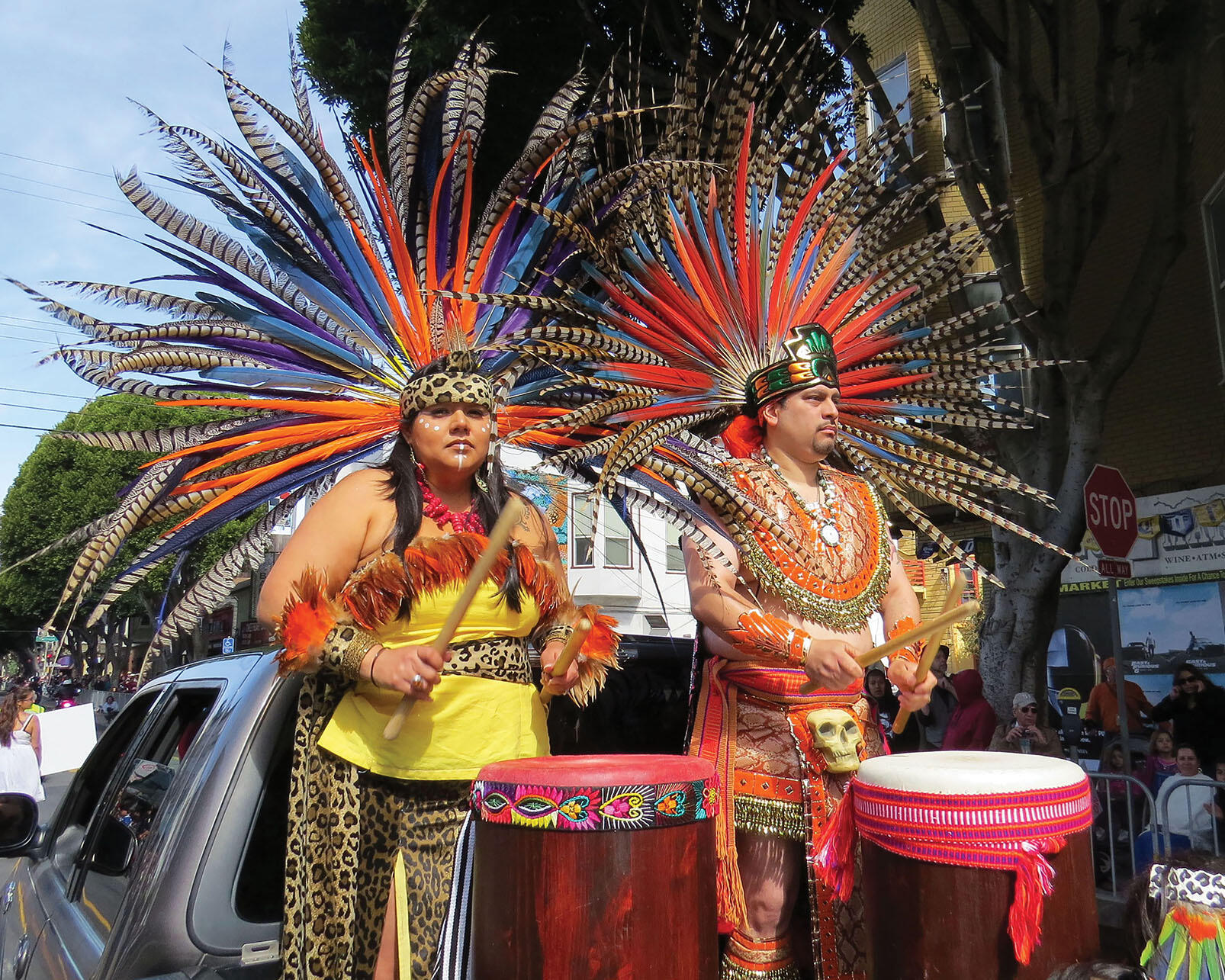 Nahuatl is among the most widely spoken of nearly 70 living Indigenous languages officially recognized by Mexico’s government, with almost 1.4 million speakers today. Many Nahuatl words have been incorporated into English, including avocado, chocolate, chile, coyote, and tomato.

For years, students have approached the Center for Latin American Studies at UC Berkeley requesting for-credit Nahuatl courses on campus. In Spring 2018, CLAS connected with its counterpart at the University of Utah to foster a teaching collaboration in Nahuatl. Utah’s CLAS had a preexisting partnership with Mexico’s Instituto de Docencia e Investigación Etnológica de Zacatecas (IDIEZ, Zacatecas Institute for Teaching and Research in Ethnology). Together, we set up a distance-learning, for-credit course in Nahuatl for UC Berkeley students, taught by an IDIEZ instructor in Utah. For Indigenous and less-commonly taught languages, distance learning greatly multiplies access to the limited number of experienced instructors.

The course’s design proved prescient when the pandemic changed our world and education transitioned to “remote.” We offered Beginning Nahuatl in Fall 2020, taught by Abelardo de la Cruz de la Cruz, a Nahuatl native speaker from Tepoxteco, Chicontepec, Veracruz, and a Ph.D. Candidate in Anthropology. The excitement about the course was evident: 12 students enrolled, including three from UC Merced. A second semester course followed in Spring 2021.

One of the students who has benefited from the Nahuatl courses is Everardo Reyes, a first-generation Ph.D. student at UC Berkeley in Ethnomusicology. Everardo’s primary research interest is how Indigenous musicians and activists in the Americas use sound to challenge settler-colonial borders around race, identity, nationality, gender, and sexuality. Knowledge of Nahuatl is necessary for his research, and CLAS is proud to be able to offer more courses next year.

LANGUAGE: Niahciz, I Will Arrive: A Song for the Future From the Past
By Everardo Reyes 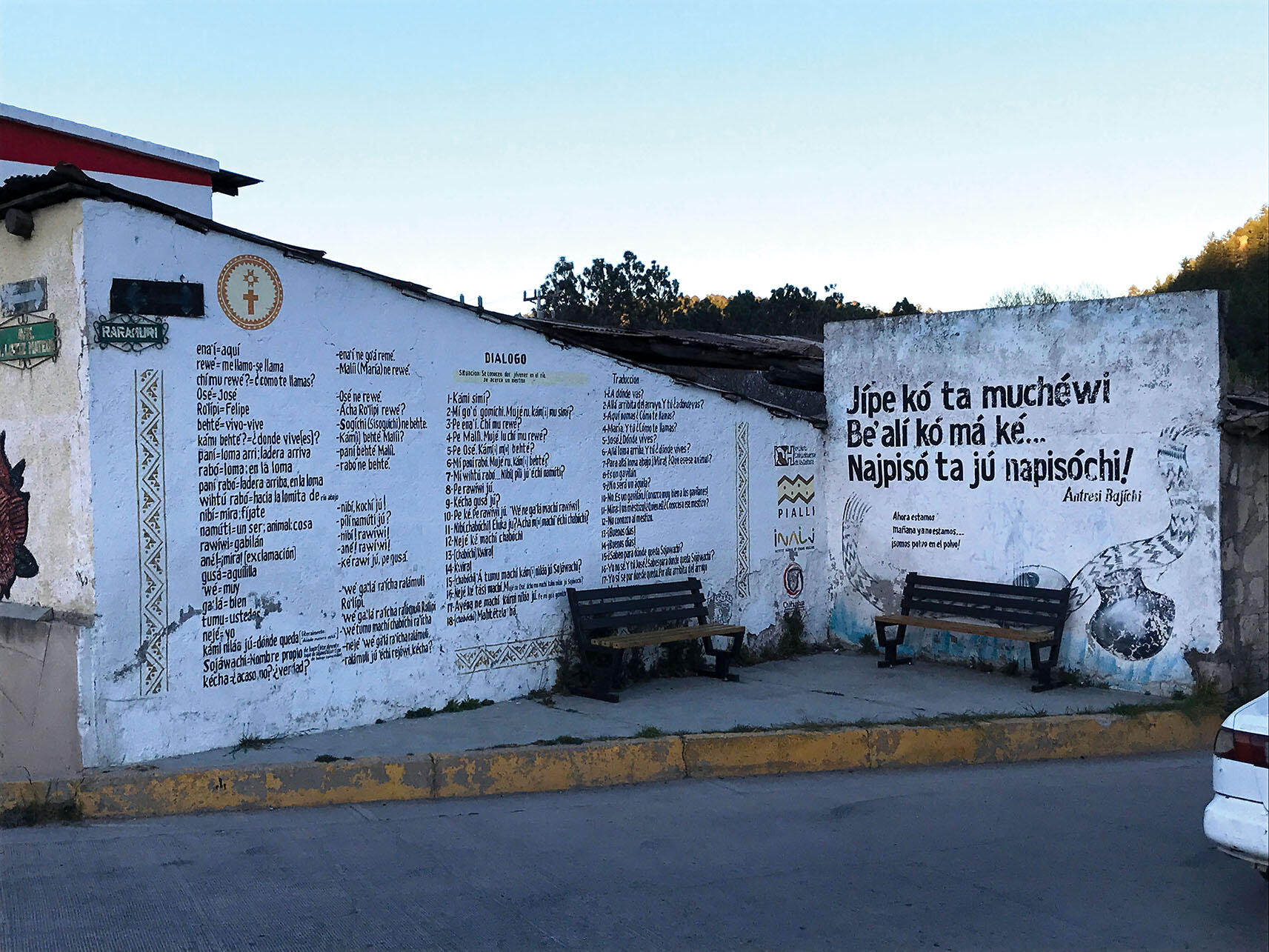 First Chorus: The Past

The warm grains of sand swish under our feet as we walk through the New Mexico desert. My grandfather kneels next to me as his hands wrap around a dry weed. This memory rattles like an old film reel at the end of a movie. He shares with me a message, a way of knowing, a philosophy about the desert. I often share this story with my son, never really sure if it will take hold the same way. I keep my grandfather’s words close to me: not all things are up for academic extraction.

I have a personal connection to Indigenous language. My grandfather spoke Rarámuri. Although he kept the details of his Indigenous heritage from his children, he could never hide his excitement when speaking Rarámuri with the community on family visits to Chihuahua, a state in northern Mexico. By the time I was born, my grandfather had gone entirely deaf, so the only communication I had with him was through sign language.

I was never able to learn Rarámuri from my grandfather, but when I had the opportunity to take a Nahuatl language class at UC Berkeley, I jumped at the chance. Nahuatl is an Indigenous language spoken largely in Southern Mexico in the Huasteca region. However, the language is spread around Mexico and travels with Mexican diaspora to the United States. Though the languages are not the same, I feel connected with my grandfather every time I speak Nahuatl. There is a harmonization I feel between us. This harmonization is reflected here in the choruses. The similarity between these themes is meant to mimic the rhyming of choruses. Yet, the content is different, moving along the song/story.

When first learning the language, I journaled about my experience. It’s like I can taste the words. The words carry with them a legacy and sweetness. They are a testament to something I cannot yet explain but that I feel to be there. The words whisper a message underneath the sounds, something I am close to hearing.

I did not grow up in Rarámuri culture, nor did I grow up in Chihuahua, Mexico. As a result, learning Nahuatl provides me some connection to Indigenous culture in Mexico. And since my grandfather was multilingual, I relish in the thought that he may have spoken or understood Nahuatl 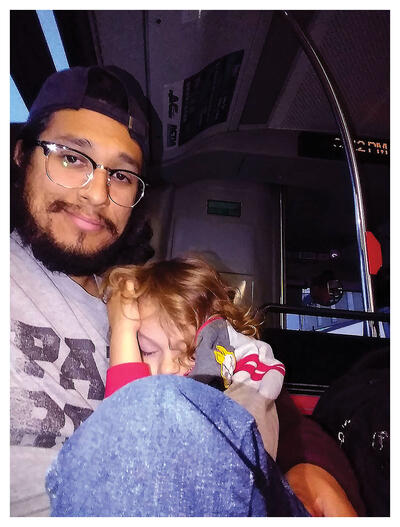 Fall 2019. I put my son on my back as we race for the bus. I push his stroller in front of me and chuckle. It’s only on the days that we are running late that he refuses to ride in his stroller. We see the number 52 bus sitting at the bus stop. The sliding doors squeak as they flop open. I hop on the bus frazzled with urgency. Out of breath, I swipe my AC transit pass. My son is giddy with joy. Our weekly routine is running after the bus so we are not late for class. We ride the 52 to UC Berkeley’s Latinx Research Center to take a Nahuatl class.

Professor Arturo Dávila-Sánchez graciously teaches the course as my son wanders around the room. “How do you say cat in Nahuatl?” my little boy asks. “Mizton,” the professor tells him. I know that I will retain less information as I try to learn Nahuatl and watch my son. But it is far more important to me that he hears Nahuatl.

Every now and then, he falls asleep on the bus ride back. He snuggles with me tightly as the bus bounces around University Avenue. The moments I share with my son remind me of the early memories with my grandfather in New Mexico. I feel the past and present harmonize or rhyme and ponder the future. My heart warms as I think about how my son will carry our memories and Indigenous ways of knowing forward. I can’t even imagine the future that will come from us learning Nahuatl together.

Indigenous language revitalization is powerful because language provides a connection to culture while paving the way for Indigenous futurism: it creates a possibility for healing. By speaking Nahuatl, I actively participate in this future, and it is this space of possibilities that my research grows.

My scholarly work focuses on Indigenous self-determination, sovereignty, and language revitalization through technology and music. For about seven years, I have been studying the relationship between social stratification, access to music, and how musicians from disadvantaged backgrounds overcome barriers to create and distribute music. Currently, I am in the early stages of creating a collaborative documentary about Indigenous radio in Canada with music journalist Brian Wright-McLeod (Dakota-Anishnabe) and Dave McLeod (Ojibway/Métis), the general manager of Native Communications Incorporated (NCI). Our goal is to create a series of short films that explore the relationship among technology, Indigenous language, culture, music, and politics.

My doctoral dissertation will examine how Indigenous communities reject settler-colonial borders and make trans-Indigenous coalitions with technology, media, language, music, and art. I am interested in what ethnomusicologist Trevor Reed (Hopi) calls “sonic sovereignty” and how music and performance create a type of Indigenous governance that rejects colonial recognition (Coulthard 2014). For me, sound, law, and sovereignty are interrelated and a point of resistance for Indigenous artists throughout the Americas. When we speak our Indigenous languages, we are deconstructing the national borders that try to limit our sovereignty and human rights

It’s Fall 2020. The tiny little boxes on my blue screen move every time a new student “enters” the Zoom classroom. I shift around in my seat and try to get comfortable as Professor Abelardo de la Cruz goes over the syllabus. The Nahuatl course I took in 2019 with my son was not a formal class. As I go back and forth through the Nahuatl workbook, trying to understand the language’s pronunciation and agglutination, I realize that this is the first time the university will formally recognize my Nahuatl studies. Receiving credit for my work on Indigenous language gives me a sense of pride. But even if the class were not recognized, I would still be in front of that screen.

A semester later, I still struggle to identify intransitive words, but the language is sticking. In the mornings, I say to my son, “Queniuhqui tiitztoc? How are you?” “I’m good,” he says in English as he runs off to play. Professor Dávila-Sánchez and Professor de la Cruz gave me a gift that I can pass down to my son. I am grateful that CLAS supports the Nahuatl language course in partnership with the University of Utah.

As I reflect on the importance of Nahuatl, I think of the book by Nez Perce scholar and writer Beth Piatote. In The Beadworkers: Stories, Piatote writes about the sweet and often overwhelming feeling of language revitalization:

There were times I was discouraged, when I faced the entire ocean of words and I feared the undertow would pull me under, like an eagle who is dragged into the current of a river, talons locked on the back of a salmon. Later, I would learn another word, and I would hold it just as close, say it to myself, to the sky, say it to Phil and those who spoke: pá·yca pá·ytoqsa. I am coming. I am coming back.

I hold close the word niahciz, Nahuatl for “I will arrive.” The “z” at the end of the word denotes the future: I look forward to the possibilities I cannot even imagine.

Everardo Reyes is a Ph.D. student in Ethnomusicology at UC Berkeley whose research focuses on Indigenous sovereignty and self-determination through music and technology.

Berkeley’s Nahuatl courses are an initiative of the Latin American Indigenous Studies Alliance (LAISA), part of the National Resource Centers Program supported by the U.S. Department of Education under the auspices of Title VI, Section 602(a) of the Higher Education Act of 1965. Thanks to the UC Berkeley Department of Linguistics for their help in listing the Nahuatl courses. 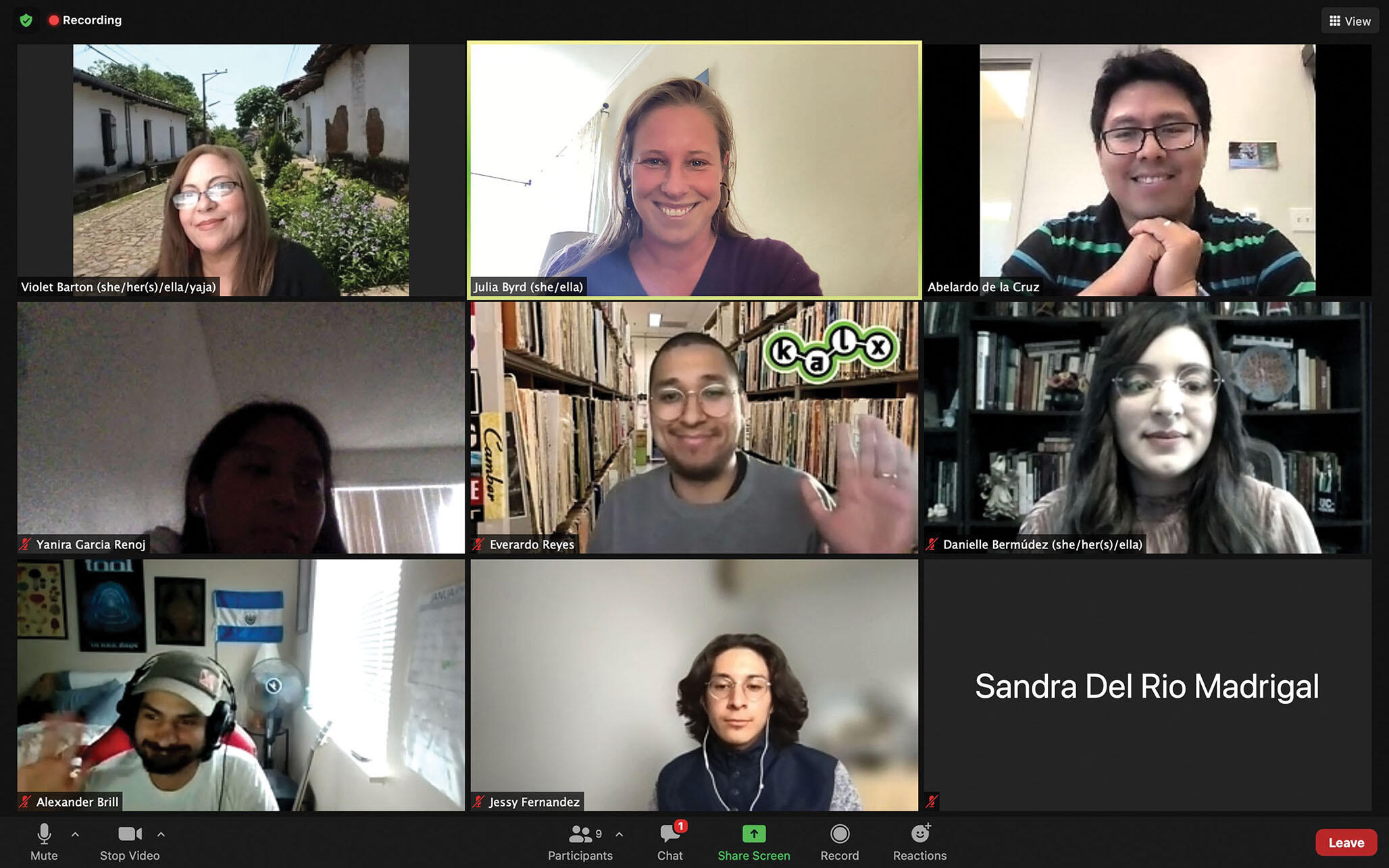