LITERATURE: A Long Petal of the Sea 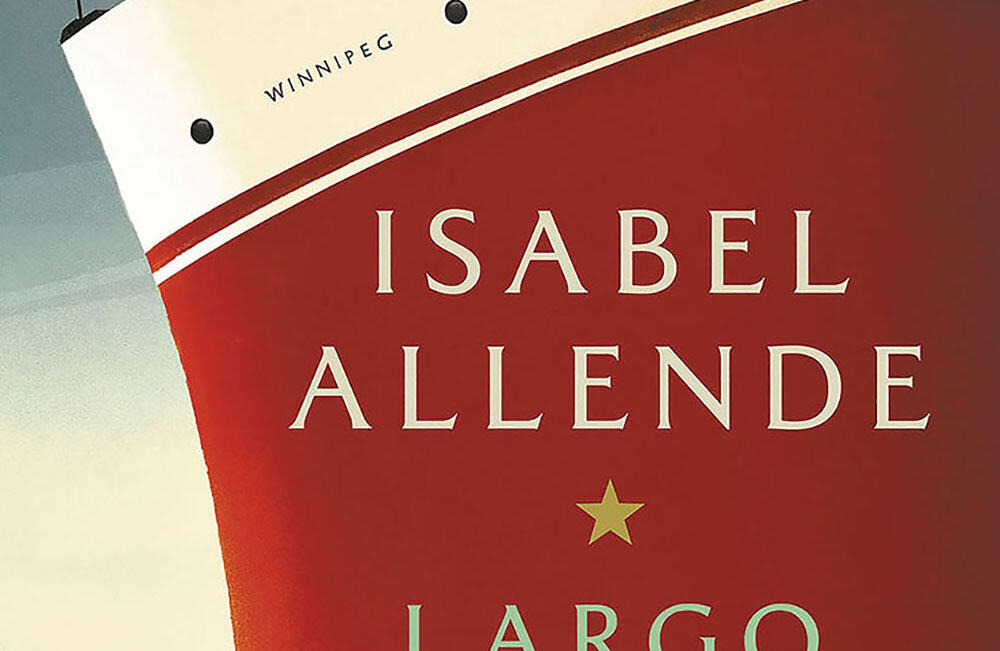 In the late 1930s, Spain’s civil war compelled thousands of refugees to flee their homes in search of a safer life. Isabel Allende’s latest book, A Long Petal of the Sea (Ballantine Books, 2020), follows a pregnant young widow whose life becomes intertwined with an army doctor who is her deceased love’s brother. In order to survive, the two must unite in a marriage neither of them desires.

In the last event that the Center for Latin American Studies hosted publicly prior to the Covid-19 pandemic, Isabel Allende spoke with Adam Hochschild about her book and the legacy of the Spanish Civil War in Latin America and around the world. The following excerpts are from this conversation. 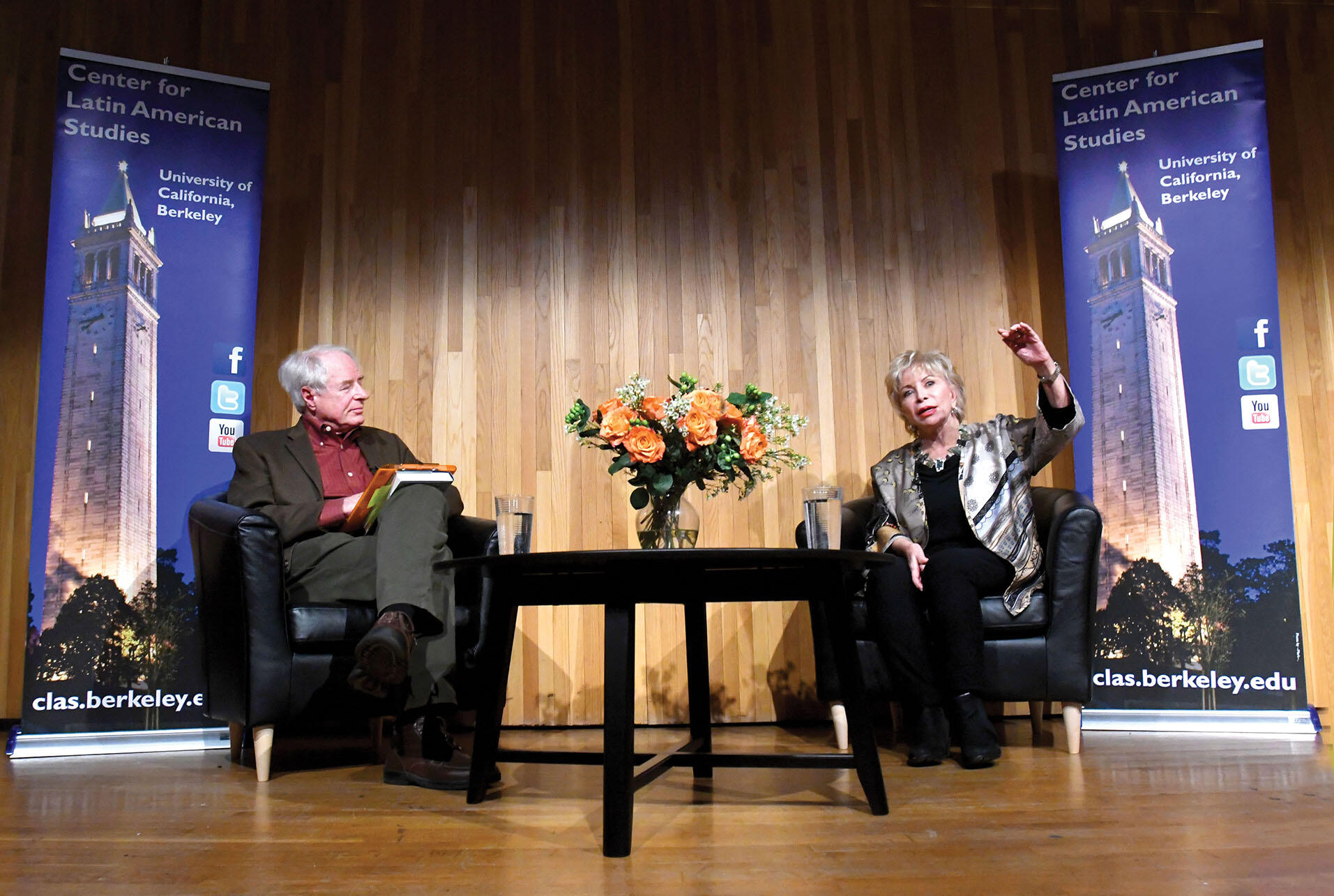 Adam Hochschild: Sometimes, when I read a book that moves me, I try to imagine the moment when it began, the moment when there was a pebble tossed in the pond and the ripples went outward. From what you’ve told me, I’m wondering whether that moment was when your stepfather told you about greeting people from the Winnipeg?

Isabel Allende: I think the moment when I heard the story for the first time was 40 years ago. I was living in exile in Venezuela, and I met a guy who was charming. He had been one of the passengers of the Winnipeg. He was much older than me but still very attractive. He was called Victor [Bay]. He told me the story. He had been in the civil war that you described so well in Spain in Our Hearts, the Battle of Teruel and all that.

Then he came to Chile on the Winnipeg. He spent 30 years in Chile, almost as a Chilean citizen. Then we had the military coup, and he was arrested. He experienced again the same thing he had experienced before: a concentration camp and then exile. He ended up in Venezuela, where I was. He told me the story, and I kept it inside. I think that the moment I thought, “I have to write it,” was when the issue of immigration and refugees became so relevant, so in the air, that it was almost impossible to ignore.

My last three books featured refugees, but in this case, it was a story of refugees, which is different from just mentioning them in passing. This was really the story of a person who is displaced and who is looking for a home. I think the circumstances forced me to write it now and not before.

AH: For people who are not familiar with the story, give us a picture of this shipload of refugees from Spain. What they were fleeing, and how did they happened to come to Chile?

IA: In 1936, a socialist or a leftist coalition of parties was elected in Spain. Immediately, the right wing and the Church decided to topple the government, and on July 18, 1936, the army rebelled with the idea that in 24 hours, they would have control of the country. But the workers, the students, independent people, leftist people who had voted for that government took up arms against the army. The most cruel and horrible civil war lasted three years. 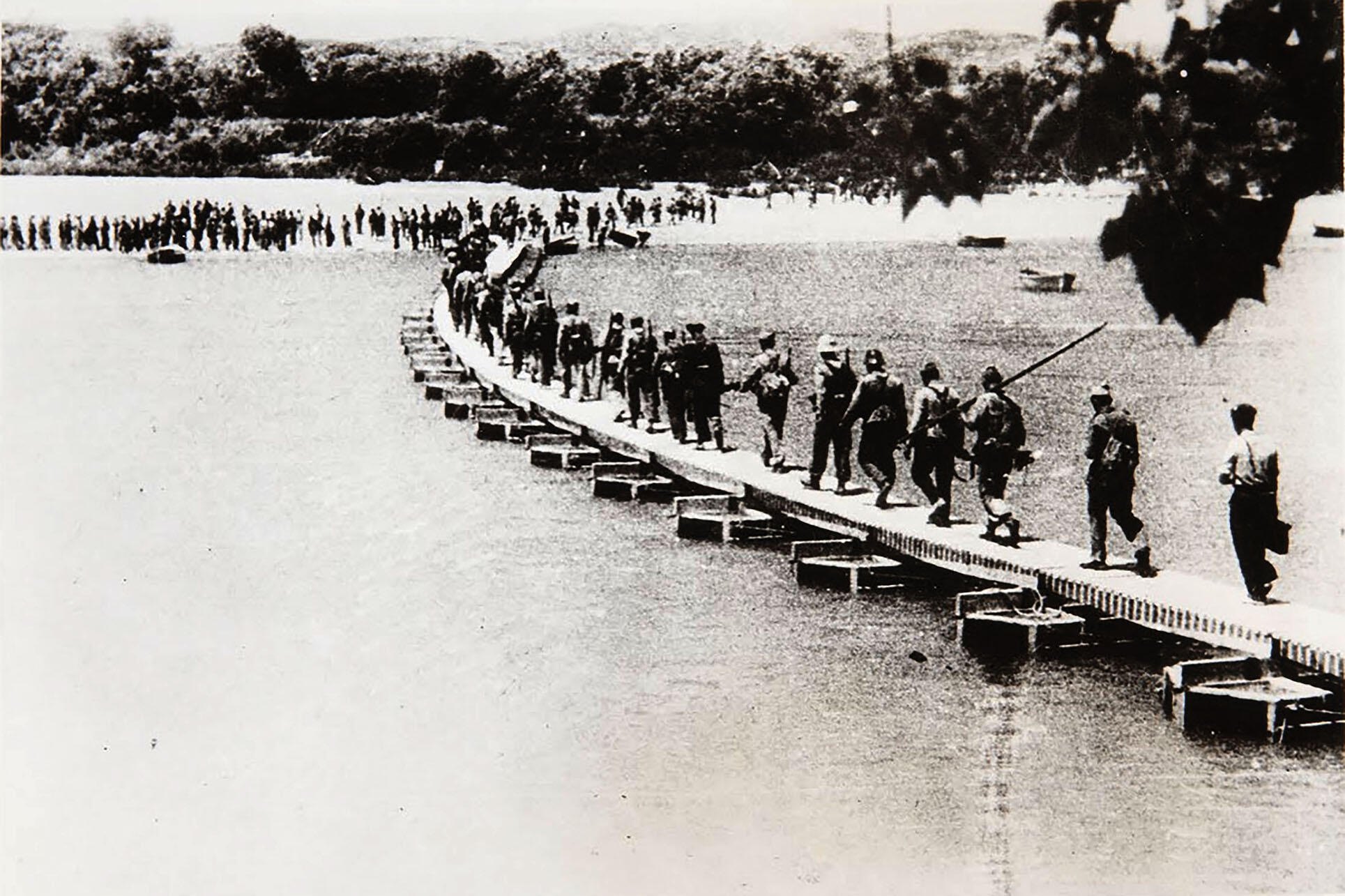 Many Americans, as Adam describes in his book, and volunteers from other countries joined what was called the International Brigades. Young men and women went into Spain illegally, they crossed the Pyrenees, and they entered Spain to fight for the República. Then, in January of 1939, the coldest winter ever, the fascist troops of Franco surrounded Barcelona. The people were so scared because, in every place they had captured, the repression was so awful. Half a million people walked to the border with France with their grandchildren and their pets and their babies covered with blankets or whatever. The pictures of what they went through are incredibly horrible. 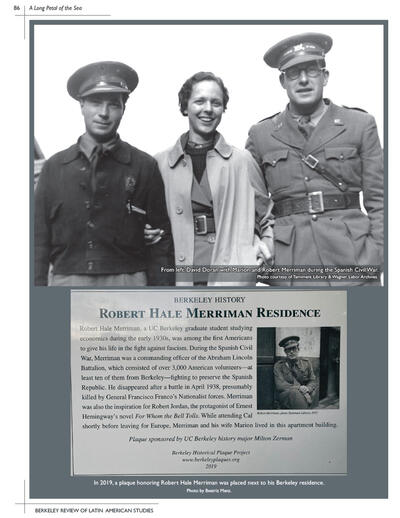 Neruda convinced the Chilean government to bring some Spanish immigrants to Chile. There was opposition in Chile from the right and the Church because they didn’t want these “leftist atheists.” [...] They accused them of raping nuns, of coming to take away jobs. The rhetoric is so similar to what we hear today. When I read the newspapers from that time in Chile, it’s incredible that we keep repeating the same wording even.They arrived at the border, and can you imagine the French received half a million refugees in 24 hours? And we complain about what we have on the border! They didn’t know what to do with them, so they placed them in concentration camps that they improvised on the beaches in that part of France. The beaches were closed off with barbed wire and patrolled by Senegalese troops on horseback with whips and rifles. They placed people there with no latrines, no running water, no food, no shelter, nothing. The children started to die. The old people died. And it was such a horrible situation that the poet Pablo Neruda, who loved Spain, wrote a book of poetry called España en el corazón, a title that you borrowed for your book.

Neruda was sent to Paris with no money but with the authorization to bring the refugees. He was told — and there’s a document that says so — to bring skilled workers who can teach Chileans their craft, don’t bring the people with ideas. Of course, Neruda paid no attention. He chose about a thousand skilled workers, and the rest were all intellectuals, artists, professionals, his friends, and people like that.

They came to Chile on the Winnipeg, a cargo ship that he had fitted out [to transport passengers], and he selected the crew, also. He sent them to Chile, and in Chile, they were received with open arms. There is a scene that I tried to describe because when I read it — and I read a lot about it — I would cry every single time. These people had gone through three years of horror, concentration camps for months, and the terror of the Second World War that was just about to happen. They arrived after crossing two oceans and the Panama Canal. And they get to this country they can’t even place on the map. They have never even heard of Chile. When they arrive and the ship docks, they see an immense crowd, waving flags, singing the songs of the República, with Chilean food, with wine, welcoming them. Immediately, they were received, they had jobs, they had places to stay, they had friends. My family was one of the families that opened their doors to them. 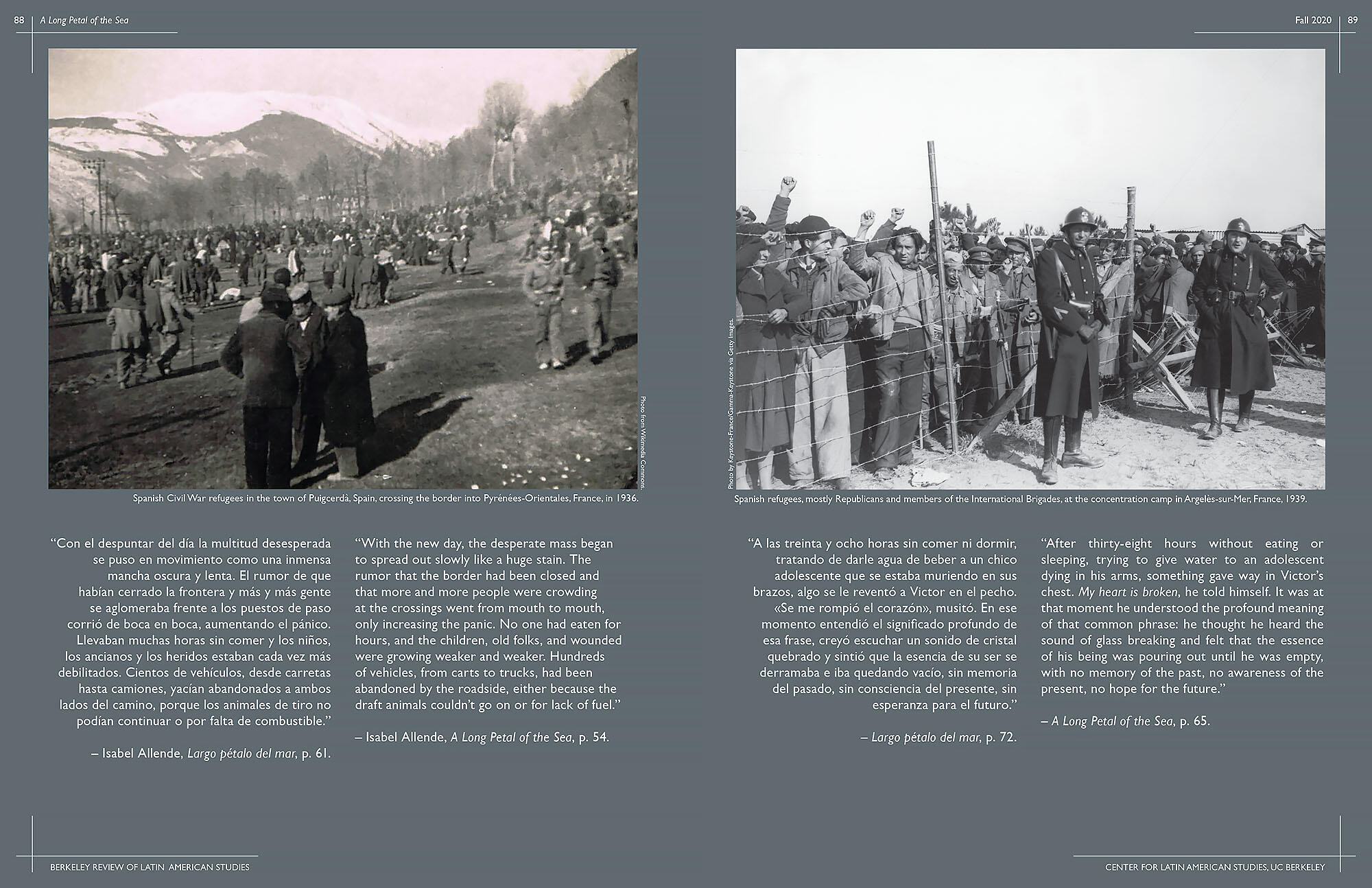 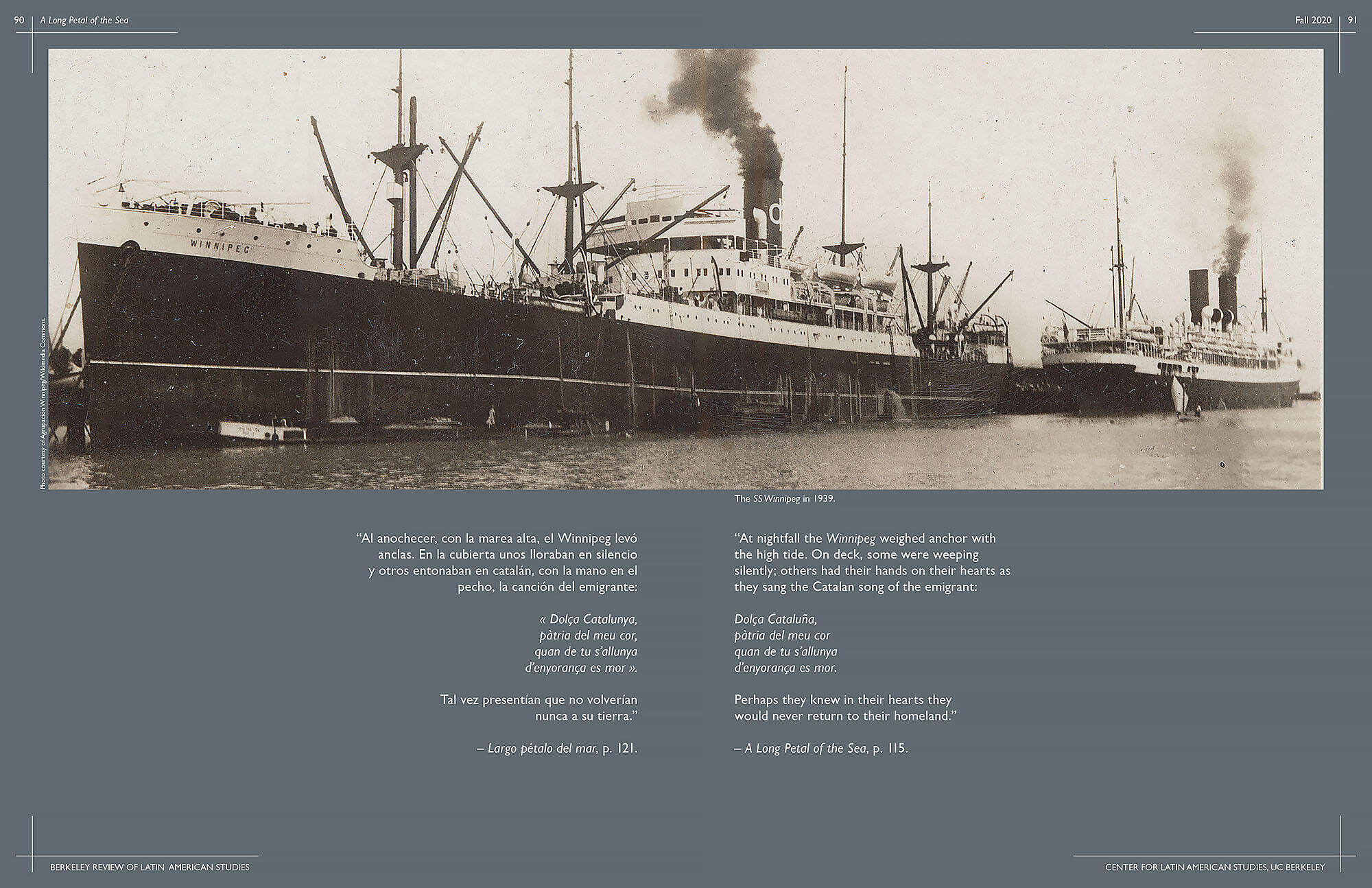 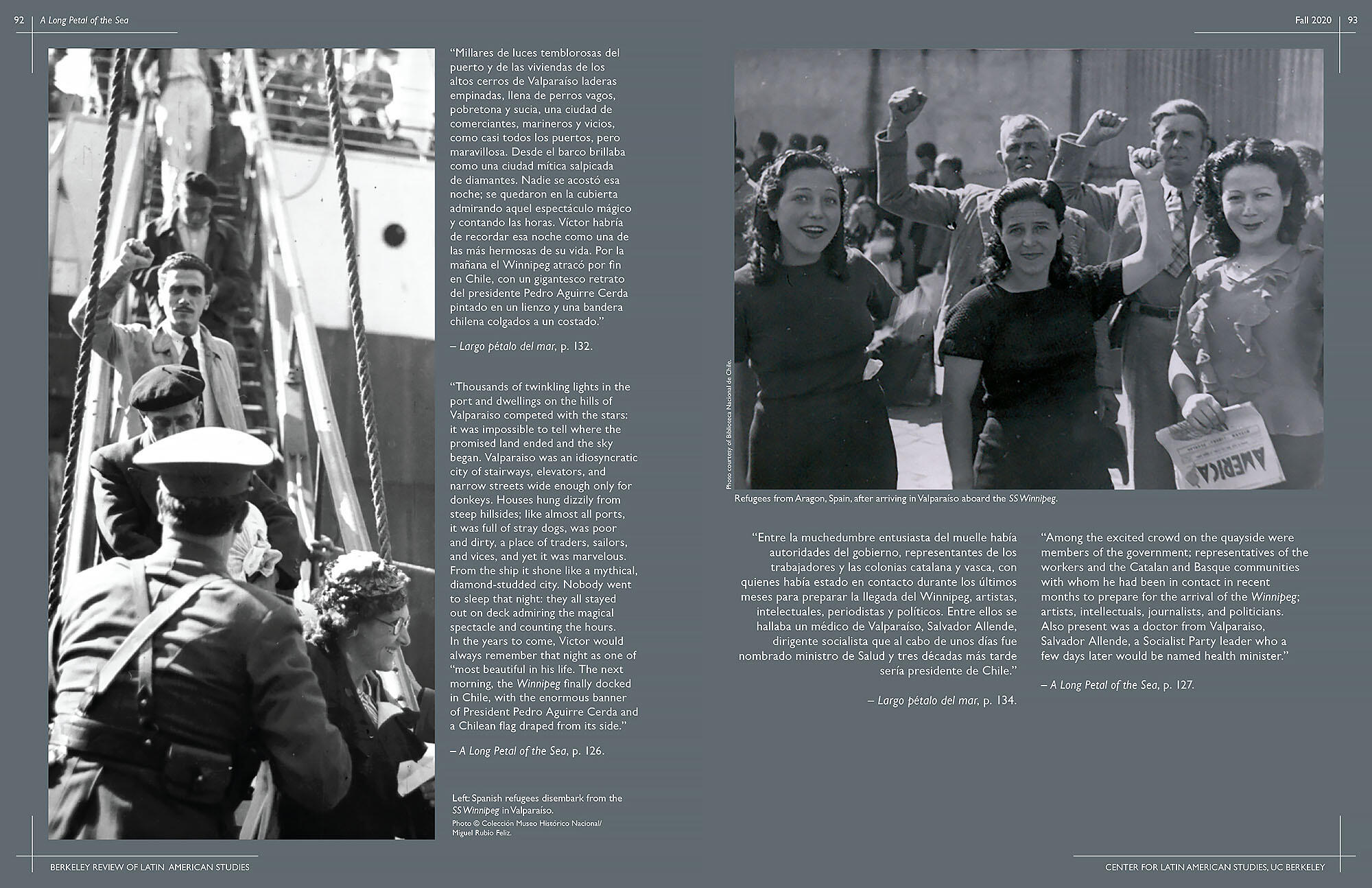 AH: Didn’t you say your stepfather was on the dock…

IA: What happened, which is a nice story also, is that the ship first stopped in Arica, but it didn’t get close to the port because it was not authorized. It would dock in Valparaíso, which is much further south, but Arica is the port nearest to the beginning of Chile’s territorial waters. The ship stopped there, and they sent over a boat with two junior civil servants — one from Immigration and one from the Foreign Office — to give them visas. They had to interview each person on the ship. 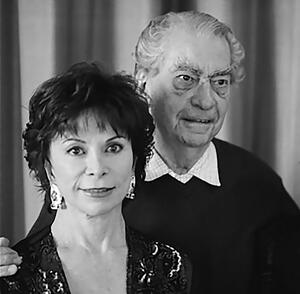 These civil servants were just kids, a couple of very young guys. They came from conservative families. They didn’t like the idea of these communists coming to the country. But when they talked with each one, and they saw who they were, and they saw the children and the women, they changed their minds. The passports they would give them were stamped with the place where they had to go according to their skills. For example, the fisherman to the south, the miners to the north.

AH: Can you talk about why displacement and migration run through so many of your books?

IA: Because I am a displaced person, a very privileged one. First, I was born in Peru, and my father abandoned my mother, so we went to Chile when I was three, and I was raised in the house of my grandfather. Then my mother married the man who was the junior official that received the Winnipeg. He was a diplomat. We traveled all the time, all my youth, my childhood, and adolescence, saying goodbye to places and people and schools. When I finally established myself in Chile, had kids, I thought I would never leave.

We had the military coup, and I went into exile. Then, when we still had the dictatorship in Chile, and I couldn’t return, I came on a book tour in the United States, fell in love with a guy, and became an immigrant in the United States. Well, I moved into his house without an invitation, with the idea that I would get him out of my system in a week. We were married for 28 years.

Isabel Allende is one of the most widely read authors in the world. A Long Petal of the Sea was published in English by Ballantine Books (2020) and in Spanish as Largo pétalo del mar by Vintage Español (2019).

Adam Hochschild is an author, historian, and lecturer at UC Berkeley’s Graduate School of Journalism. His book Spain in Our Hearts: Americans in the Spanish Civil War, 1936-1939 was published by Houghton Mifflin Harcourt in 2016. 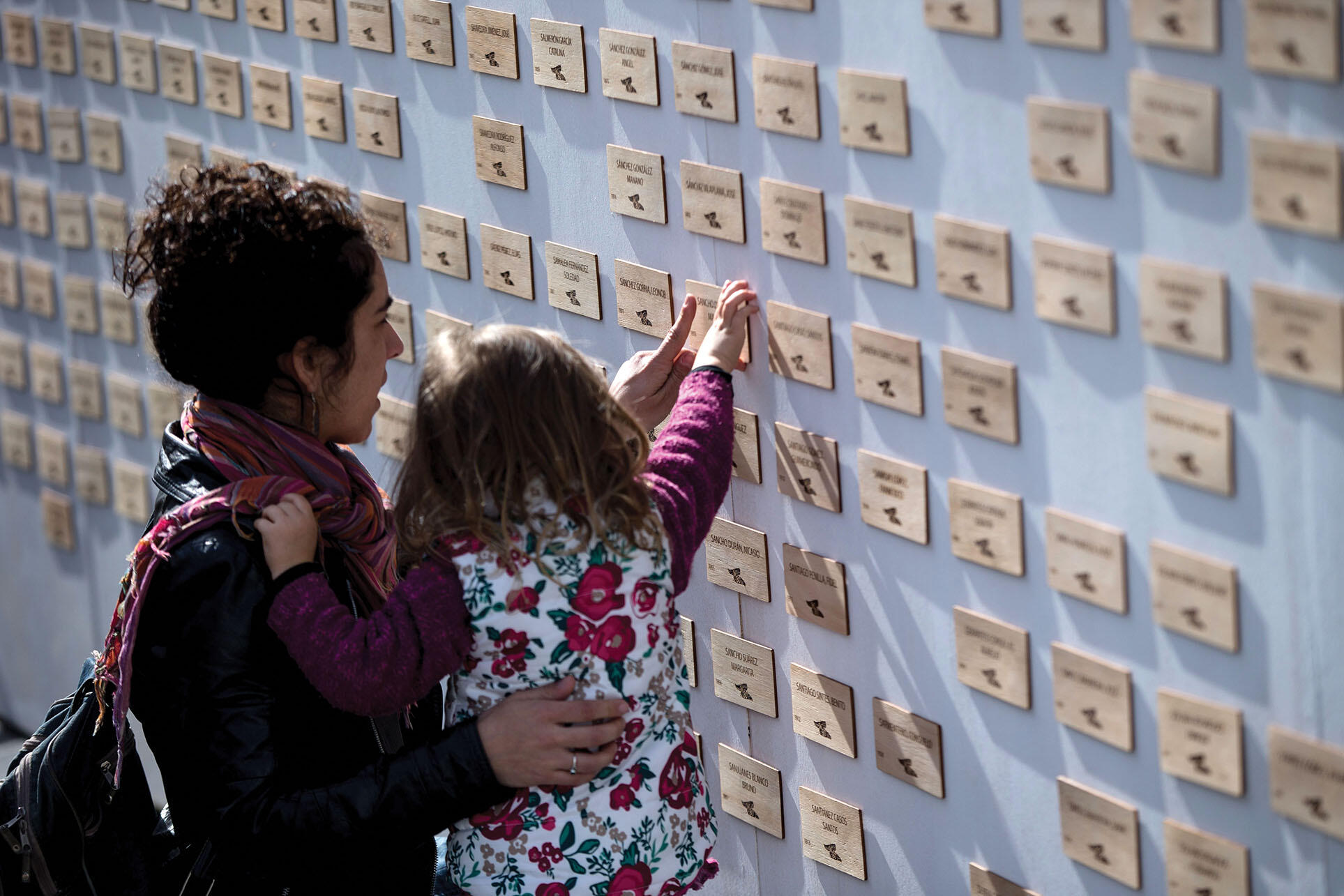