The ruins of Teotihuacán still have the capacity to awe. The Pyramid of the Sun — towering over the valley — is among the most massive ancient structures in the hemisphere.

It was part of a complex society that achieved its apex almost 14 centuries ago in the Valley of Mexico, less than 30 miles from modern-day Mexico City. The ancient city at the heart of this society was among the largest and most sophisticated in the world, spreading out over more than 20 square kilometers and anchoring an urban state-level society in central Mexico for four centuries. Archaeologists estimate that 125,000 people once inhabited the site, which recorded its most exceptional achievements prior to 650 CE. Centuries later, the Nahuas of Mexico-Tenochtitlan — more commonly known as the Aztecs — encountered the abandoned city and gave it the name we use today: Teotihuacán.

Mexican archaeologist Linda Manzanilla has done work across the world — from Mesoamerica to Mesopotamia and from Egypt to the Andean region — but she is particularly known for her pioneering, decades-long research at Teotihuacán. In the course of her work, Manzanilla and her students have demonstrated that the city developed an unusual sociopolitical organization based on group identity, and in her talk for CLAS entitled “Teotihuacán: An Exceptional Multiethnic City in Pre-Hispanic Central Mexico,” Manzanilla explored some of the city’s more unusual aspects.

Founded after the volcano Popocatépetl’s eruption in the first century, Teotihuacán became one of the largest and most populous preindustrial cities in the world, developing characteristics that made it unique in Mesoamerica. Its orthogonal urban grid system defined the city, with a geometric design reflective of Mesoamerican cosmology. The famed Avenue of the Dead and the East-West Avenue divide the city into four quadrants. Symbolically, the four quadrants represent the four corners of the Mesoamerican universe. The Pyramid of the Sun and the Pyramid of the Moon — also named by the Aztecs — are located at the core of the city. These and other monumental structures were built in Teotihuacán’s iconic talud-tablero architectural style. The pyramids align with natural landscape features, suggesting a remarkable feat of urban engineering. Likewise, Teotihuacános channeled the San Juan River to align with the city’s urban grid system.

For hundreds of years, Teotihuacán drew tens of thousands of migrants from all over ancient Mexico, developing the settlement into a multiethnic metropolis. Ethnic groups from the Valley of Mexico, Oaxaca, Michoacán, and Veracruz lived and worked in this exceptional society. The diversity of the city is not only evident across ethnic enclaves, but also within each ethnic neighborhood, where most of Teotihuacán’s residents lived in novel, multifamily apartment compounds. Although the city was inclusive overall, the society was highly stratified. Visual representation developed to convey identity, ethnicity, rank, and class.

In addition, the city plan restricted movement. Commoners were barred from most of Teotihuacán. Only elites, who were a small percentage of the total population, had access to the city core. Group cohesion was developed through public ritual, which played a major role in the social lives of residents. Ritual events included agricultural ceremonies for the state Storm God; however, foreigners were allowed to continue their traditional rituals.

Decades of archaeological fieldwork and multiple lines of evidence provide a more accurate representation of domestic and public life for commoners, intermediate elites, and ruling elites. “Each neighborhood in Teotihuacán, and that’s the most dynamic part of Teotihuacán society, was like a house society,” Manzanilla explained. “Each neighborhood had their own feasts, their own relics, their own attire, their own titles, their migratory tales. They were a group with an identity.”

Teotihuacán’s multiethnic neighborhood centers may have anchored each of the city’s four residential quadrants. Neighborhood centers contained large plaza-temple complexes for festivals and public rituals, including dedicated areas for food preparation and storage. Neighborhood centers also served as residences and administrative centers for the intermediate elite, a “middle class” of traders and specialized craftspeople. Additionally, each center housed a military garrison and a medical facility.

Everyday life centered in apartment compounds that accommodated groups of single families. In the 1980s, Manzanilla directed archaeological investigations at Oztoyahualco — a three-household commoner apartment compound located in the northwestern periphery. Analysis of apartment floors helped archaeologists identify kitchen residues and food remains. They unearthed artifacts that showed that residents made tortillas and prepared meals with squash and maize. Households were self-contained, but artifact distribution suggests that families had unequal access to goods and services and conducted unique domestic rituals. Oztoyahualco’s residents also engaged in craft production. Archaeologists have recovered pottery, obsidian tools, figurine molds, and oven-baked clay, and they have identified kilns and raw materials.

In the 1990s, Manzanilla managed archaeological investigations at the neighborhood center of Topancazco, located in Teotihuacán’s southeastern quadrant. Examination of burial styles and mortuary offerings and sophisticated scientific analysis of human remains shows that people buried at Topancazco migrated from different regions, such as the gulf coast, Tlaxcala-Puebla, and as far as Chiapas. Dietary analysis revealed that foreign-born residents suffered from malnutrition early in their lives and that people at Topancazco relied on marine and terrestrial diets. At Topancazco, ancient DNA (aDNA) analysis also provides very compelling evidence for multiethnic diversity. Data shows that the four genetic haplogroups of Mesoamerica were all present in the neighbor-hood center. 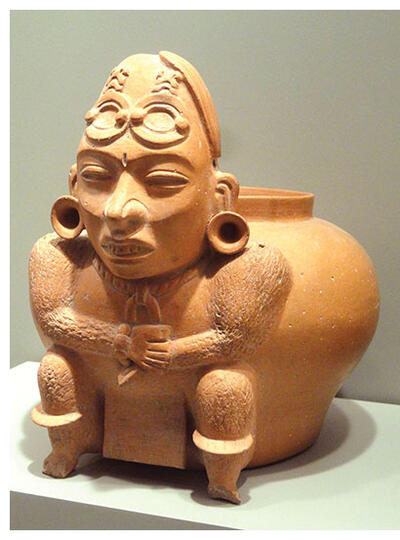 Analysis of activity markers in human remains helped to identify specific types of occupational specialization. Craft production at Topancazco focused on fabrication of items for elite consumption. Similarly, animal remains, such as crocodile, turtle, fish, local and exotic birds, and shells suggest extensive trade with the gulf coast region. Recovered lacquered ceramics, Thin Orange ware, and grinding stones provided evidence of trade and exchange with the Tlaxcala and Puebla regions. Additionally, archaeometric techniques on recovered ceramics showed that they were manufactured in the Veracruz region.

Stamp seals and round ration tokens used to administer provisions to intermediate elites and craftspeople were another interesting finding at Topancazco. The materials used to make these tokens and their sizes are indicative of class hierarchy and rank. Additionally, archaeological dating techniques and analysis revealed that human remains were used in termination rituals in Topancazco. Such ceremonies marked new construction phases in the city. Evidence suggests extensive use of human remains in rituals similar to those performed in the Veracruz region.

Manzanilla’s most recent and ongoing archaeological project at Teotihuacán focuses on Xalla, a palatial complex adjacent to the Pyramid of the Sun. At Xalla, archaeologists recovered elite items like jade (from Central America) and mica (from Oaxaca). Architectural features and temples at Xalla follow the four-quadrant system indicative of Mesoamerican cosmology, with each of the four temples associated with different deities and material remains. Xalla may have been where Teotihuacán was co-ruled by the elites of each neighborhood, which would explain the absence of royal tombs in the city.

Even though sophisticated archaeological research provides a clearer representation of the complexities of urban life in this sacred city, much is still unknown. Teotihuacán’s residents abandoned the city by the sixth century. Archaeological evidence shows that Teotihuacán suffered widespread destruction. Manzanilla suggests that the intermediate elite class revolted against the ruling elites, which unraveled the city’s sociopolitical organization and caused its eventual downfall. By the time Europeans arrived in Mexico, the city had been abandoned for almost a millennium and had been named Teotihuacán — meaning “the place where gods were born” — by the Aztecs.

Nowadays, the archaeological site of Teotihuacán draws tens of thousands of tourists and teams of domestic and international archaeologists every year. To date, the remains of ruling elites have not been identified, and much of the city is still unstudied. However, the decades of archaeological fieldwork and scientific analysis under the care of Linda Manzanilla speak to the vibrancy and vitality of this once-flourishing multiethnic metropolis.

Linda R. Manzanilla is a professor at the Institute of Anthropological Research of the Universidad Nacional Autónoma de México (UNAM) and a member of El Colegio Nacional. She spoke for CLAS on April 15, 2015.

This talk inaugurated a new partnership between CLAS and the Mexican Museum in San Francisco.

Mario Alberto Castillo is a graduate student in the Department of Anthropology at UC Berkeley. 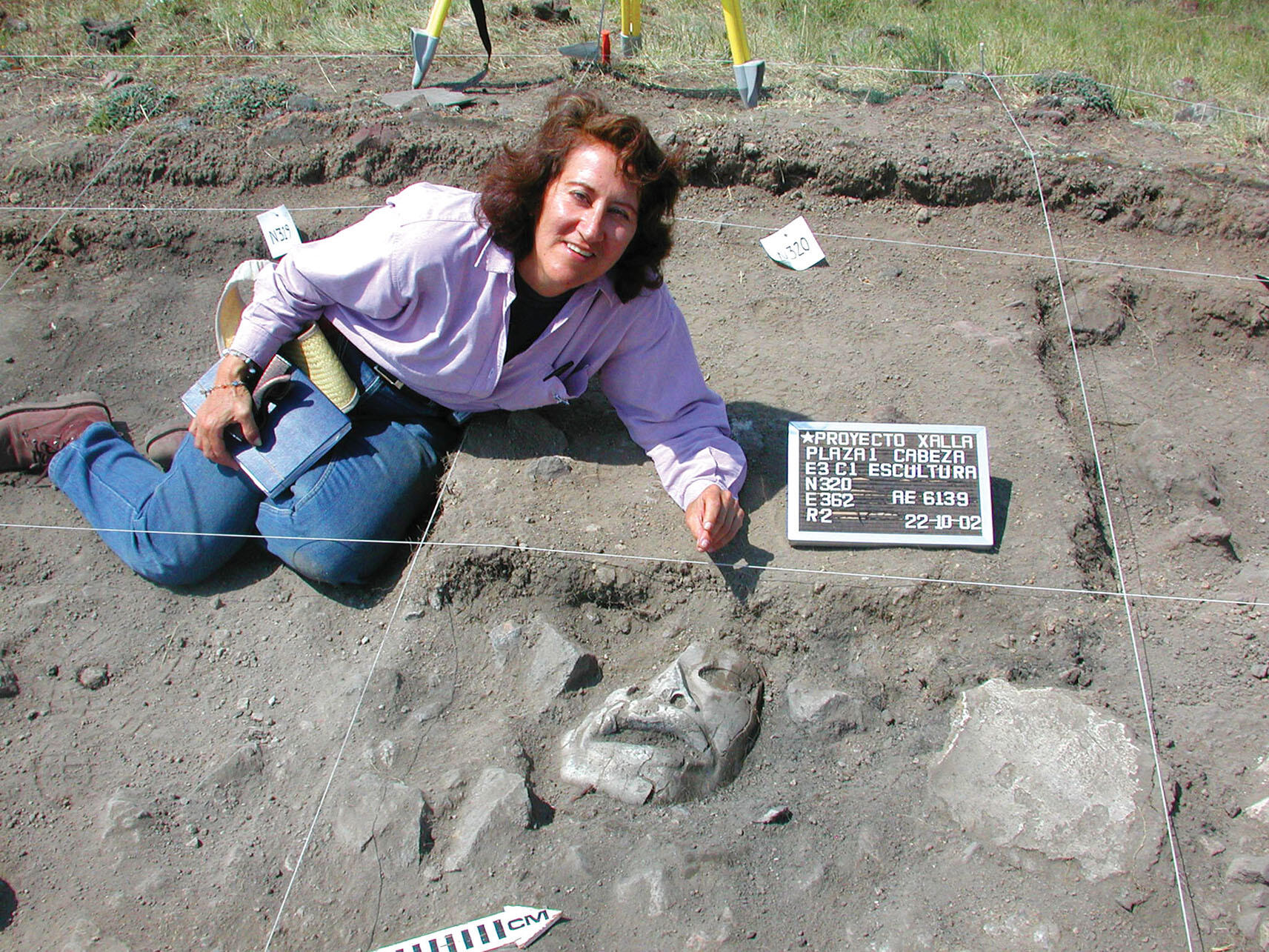