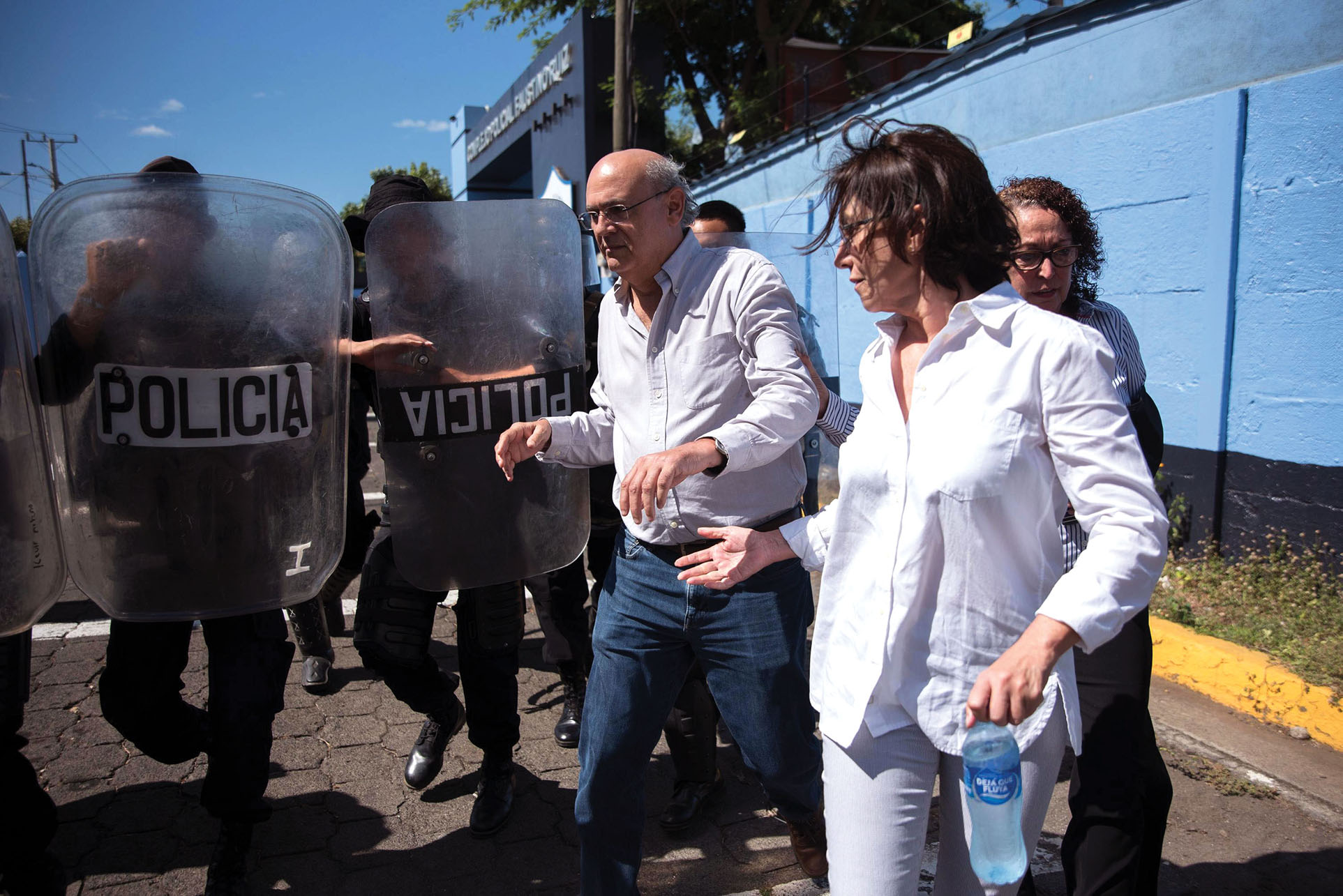 Susan Meiselas’s images documenting the overthrow of the Somoza regime in 1978-1979 have become ubiquitous for visualizing the Sandinista Revolution in Nicaragua. A decade after these photographs were first published and well into the precarious leadership of the Sandinista government, Meiselas returned to the country in 1991 to follow up with the subjects pictured in her work. Crossing temporal coordinates, Meiselas’s photographs emerge as diptychs of insurrection, capturing the ways in which people and places transgress and transform over time.

In June 2018, just days before the inauguration of her exhibition, “Mediations,” at the San Francisco Museum of Modern Art, Susan Meiselas returned to Nicaragua. Her decision was prompted by the swelling protests that had swept across the country in a matter of weeks. With little to no media attention in the United States, these recent photographs tell a vital yet disturbingly familiar narrative. The images and their familiar compositions produce a puzzling sensation of déjà vu. Like a photographic negative, Meiselas’s contemporary pictures capture the dark gradient of a failed revolution and a disintegrating social body.

In April 2018, President Daniel Ortega issued a series of social security reforms that included changes like a 5-percent tax on pensions for elderly and disabled citizens. Protestors, primarily college students, took to the streets demanding the overturn of the reforms and calling into question the increasingly repressive conditions faced by the Nicaraguan people. Rooted in growing resentment of Ortega’s violations and abuses of power — exemplified by his 11-year rule and alterations to the country’s constitution — the student movement began to turn a spotlight on the dictatorial tendencies displayed by the president.

In the early days of the demonstrations, students and civilians were met with lethal force by paramilitary agents. The atrocities of these events quickly inspired a national uprising. As the death toll rose, protests across the country called for justice on behalf of those massacred as well as the resignation of President Ortega. Amid the violence, the Ortega administration agreed to a series of national dialogues, with the Catholic church mediating conversations between government representatives and student leaders. These dialogues proved to be short-lived and ineffective. To make matters worse, they exposed many student activists who have now been forced into exile.

With no protection from national police and paramilitary forces, protestors resorted to familiar tactics of self-defense. Reminiscent of the strategies deployed by Sandinista revolutionaries in the late 1970s, they used homemade mortars, built barricades, and relied on internal networks of communication for protection. The new generation restaged acts of national resistance through a vernacular familiar to the Nicaraguan people.

However, the present-day iteration of history tells a different story. While Sandinistas set images of the dictator Anastasio Somoza on their barricaded walls in 1979, protesters today have adapted the words of the famous revolutionary figure Augusto Sandino, hanging banners that read: “Ortega Vende Patria,” a phrase that implies the president has betrayed his own country. But not only is the current liberation front accusing Ortega of being a traitor, they are comparing him to the very dictator that the Sandinista party fought so hard to overthrow. Through ruptures like these, the broken grammar of Sandinismo and what it means to be a Sandinista reveals the instabilities of political affiliation and collective memory.

As the country continues to mourn, the pain of old wounds re-emerge. Protestors in the March of Flowers on June 30, 2018, carried images of student activists and loved ones recently massacred at the hands of the state. They retraced the steps of protestors in 1978 who likewise raised photographs of student leaders killed fighting the Somoza regime, including the student martyr Arlen Siu Bermúdez.

Though Arlen’s memory persists, the symbol of revolution that she and her contemporaries represented has been rejected by those on the frontlines today. Folded into the visual language of Sandinismo, murals of Arlen and other revolutionary leaders of that time have been defaced and destroyed. Moving away from the rhetoric of revolutionary national pride, the visual landscape of today’s resistance began to take shape. With no time to craft a cohesive visual program, protestors masked their faces and called for help, covering city walls with messages that read “SOS Nicaragua... .”

In July 2018, after several months of arduous resistance and grueling hope, Ortega ordered the deployment of “Operation Clean-Up,” which authorized the use of lethal force on unarmed civilians. Declaring protests illegal, the government has come down hard on those who speak out. Facing torture, disappearance, exile, and death, Nicaraguan citizens have been forced into silence. Since the beginning of the crisis in April 2018, more than 500 people have been killed, with many unconfirmed deaths and thousands disappeared. According to the UNHCR, the United Nations refugee agency, more than 20,000 Nicaraguans have applied for asylum.

Today, Ortega’s authoritarian government grasps for control as countries around the world, including the United States, begin to impose sanctions on his regime.

Susan Meiselas is a documentary photographer and a member of the internationally renowned photographic cooperative Magnum Photos. She spoke for CLAS on September 10, 2018.

Lesdi Goussen is a first-generation Nicaraguan-American and a Ph.D. student in the History of Art Department at UC Berkeley.