NICARAGUA: An Endless Search for Truth 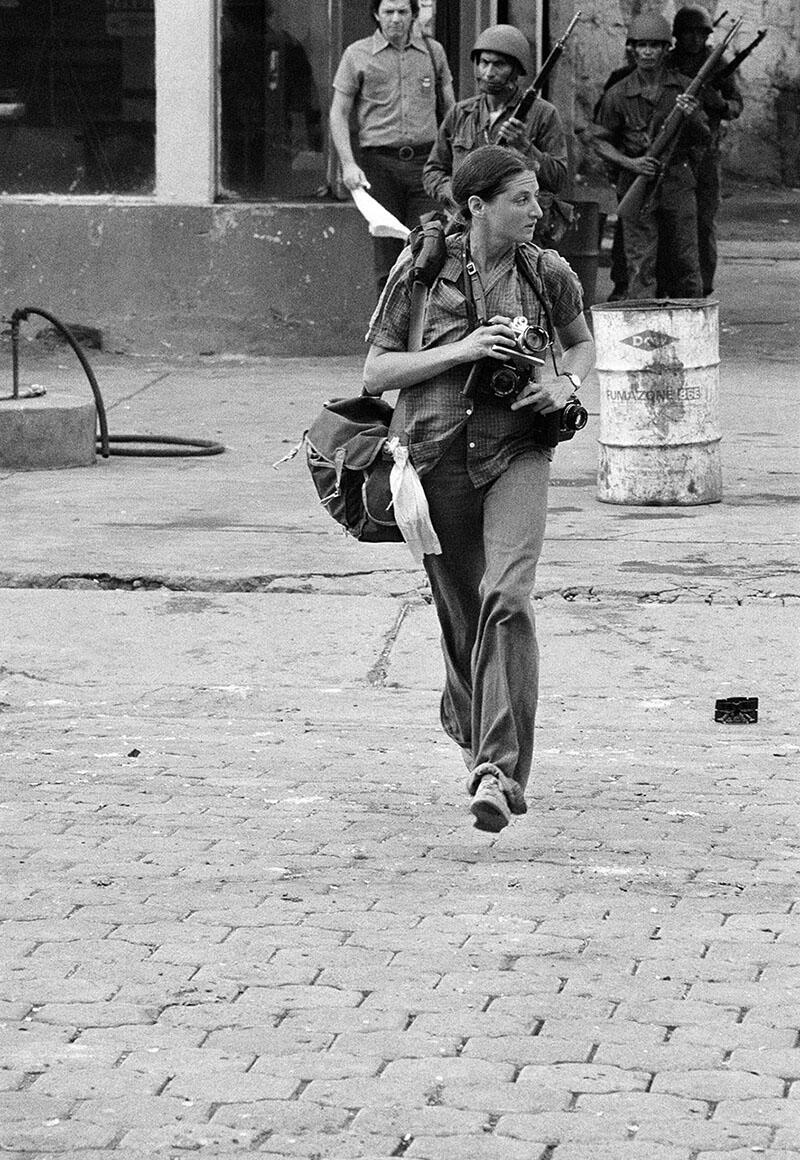 When I first saw Susan Meiselas’s photos of the 1978-1979 Sandinista Revolution in Nicaragua, I thought they looked different from any other photos I had seen. Viewing them afresh four decades later, they still look different.

There were some differences that were obvious. Almost all the war photography I had seen previously was in black and white. I suppose that war photographers worry that color would either sensationalize or prettify their images of armed conflict, which is always a nasty business. Also, of course, the photos I had seen of major conflicts — such as the two World Wars, the Korean War, and the Vietnam War — were mostly meant for publication in newspapers which then only published in black and white. Though Meiselas’s photos are in color, they are neither gory nor pretty. Her use of color seems natural and integral to her portrayal of the war in Nicaragua as a desperate extension of the struggles of daily life.

Another striking characteristic of Meiselas’s photos for me is that they were taken up close to those engaged in the struggle. Photography in a war zone is an extremely dangerous profession because it is important to the photographers to get close to the action. Meiselas’s photos seem even closer than usual.

More important, though Meiselas’s photos are not accompanied by text, a narrative emerges from the photos themselves. Her photos make it plain that what took place in Nicaragua was not a war in any conventional sense. It was an uprising fought by untrained combatants in the streets and alleys and doorways of Nicaragua’s towns and villages. The fighters did not have uniforms; they were dressed in their everyday clothes. Their weapons did not have a military heft. It is easy to imagine that many of the fighters continued to work part of the time as farm laborers or mechanics to make a living and to support their families. Some of them were probably students or teachers or low-level civil servants. Many of the fighters wore homemade masks to shield their identities and try to protect themselves against reprisals. Even though the photos do not depict cruelties by government forces nor heroic acts by the Sandinista guerrillas, they seem to suggest that this was a revolution that needed to take place.

In 1991, more than a decade after the Sandinista Revolution and shortly after the “contra” war sponsored by the Reagan administration to overturn the results of the revolution, Susan Meiselas returned to Nicaragua and sought out some of the people whose photos she had taken while the revolution was underway. She made these interviews into a film — “Pictures From a Revolution” (1991) — in which her subjects talked about their lives since the revolution. A number of the Nicaraguans she interviewed were disappointed at the way things had turned out. Having gotten to know Meiselas in the years after the revolution, it seems to me natural that she should take this next step. After creating a body of work that had played an important role internationally in building sympathy for the Sandinista Revolution, I believe she was intent on deepening and, to an extent, correcting her own portrayal of the events that had taken place in Nicaragua.

These days, with the Sandinista leader Daniel Ortega back in power in Nicaragua, an uprising is underway against his increasingly despotic and corrupt rule. Some of those opposing Ortega now are individuals who had been allied with him at the time of the Sandinista revolution four decades ago. They had served with him in the government that took power after the revolution. Meiselas has been back in Nicaragua during this period. I have not yet seen many of the photographs she has taken on her recent trips to Nicaragua, but I am eager to. Those published here suggest that the struggle underway now is a continuation of the one that took place four decades ago. The cast of characters in power is different, but ordinary Nicaraguans are still struggling against the abuses that go with the exercise of unchecked power.

Though the quality of Susan Meiselas’s photos of Nicaragua in 1978-1979 produced a substantive body of work — and the book in which they were assembled is a work of art — she has been unwilling to let it stand on its own. Susan Meiselas wants to tell the truth about Nicaragua. As her recent photographs indicate, the truth lies in a story that has not ended.

Aryeh Neier served for 12 years as the Founding Executive Director of Human Rights Watch before becoming president of the Open Society Institute from 1993 to 2012.