RESEARCH: Frogs in the Frost 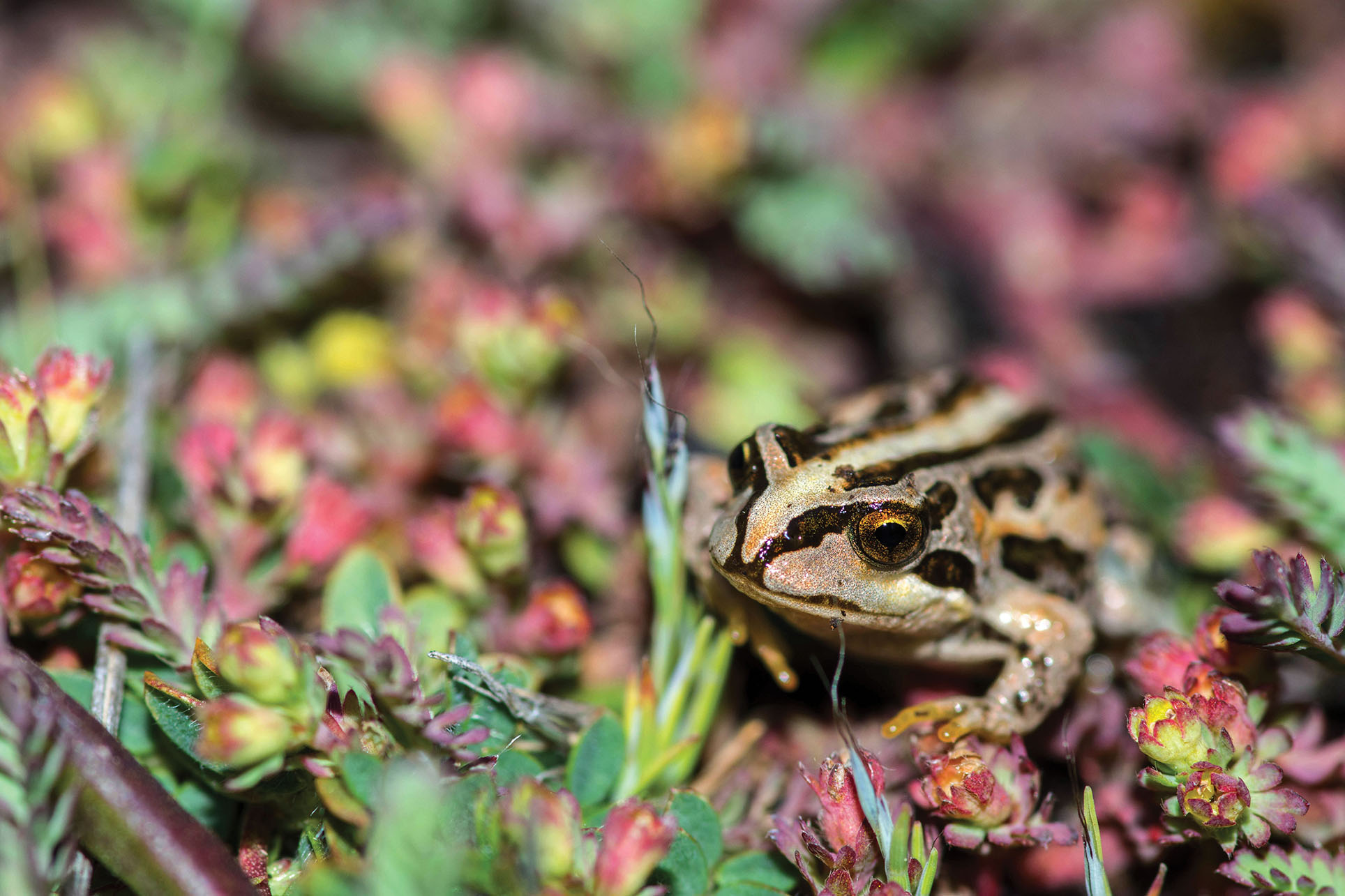 The frogs were dying. The streams were drying.

In the Cordillera Vilcanota, a heavily glaciated mountain range in the Peruvian Andes southeast of Cusco, Quechua tradition suggested that these events were linked: it is the frogs that call the rain when it is dry, keeping the streams flowing.

Legends associating frogs with rainfall emerged for obvious reasons, but they also have more complex cultural roots. Tradition dating back to Inca culture (and possibly back to pre-Inca times) named not only the bright stars of the heavens but also the “dark constellations” — the negative space around the stars. Hanp’atu, “The Toad,” was a dark constellation that rose from the horizon synchronously with the first seasonal rains.

Perhaps because of the perceived threat that the disappearing frogs posed to their crops and pastures, local smallholders managed to broadcast their concerns widely despite their extreme geographic isolation. A long-term amphibian-monitoring effort was quickly established in the Cordillera. Soon, scientists had linked the reported die-offs to the pathogen that has driven the largest biodiversity loss in history: the chytrid fungus Batrachochytrium dendrobatidis (Bd).

However, I am drawn to the Cordillera because I wonder if the dying frogs and drying streams are, ultimately, connected. From March to May 2018, I spent my first season in the Cordillera collecting data to test my hypotheses. I was supported by a Tinker Foundation and CLAS-funded research grant, as well as by spirited local guide Gumercindo Crispin Condori; dedicated Cusco undergraduate students Jared Guevara Casafranca and Peter Condori Ccarhuarupay; ever-patient packhorses Chumpipaya, Oroscocha, Yanapaya, and Yura; and troublemaker packhorse Muro. 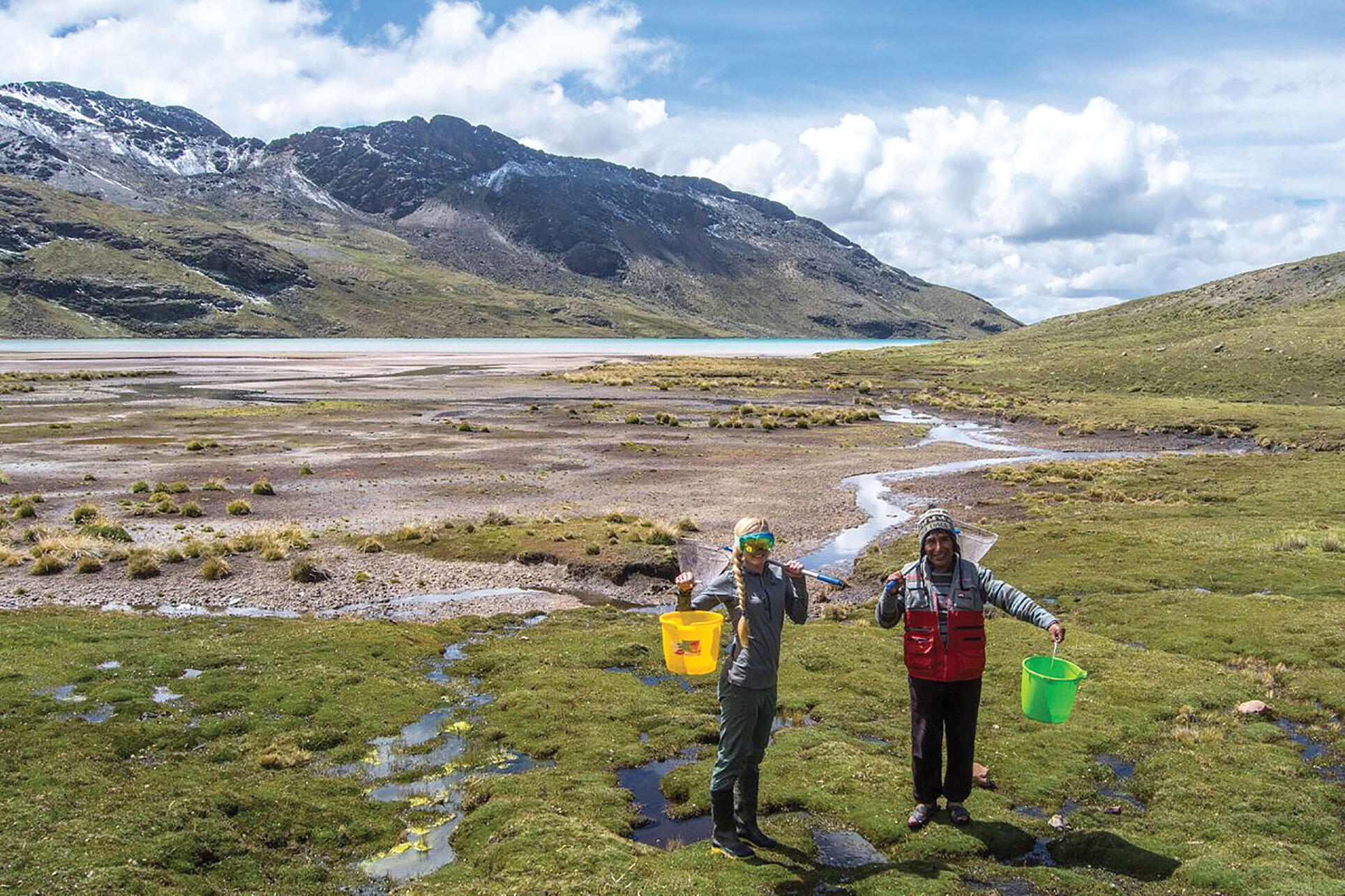 Drying streams are just one symptom of much larger changes occurring across this landscape. This season, as we crossed the countryside and spoke to smallholders who have lived here all their lives, we were confronted by the local repercussions of a globally changing climate. We met herders and cultivators digging new irrigation ditches and diverting new springs, replacing streams that have ebbed or gone extinct. We easily crossed high mountain passes that just a few decades ago were blocked by glacial ice. Our steps sometimes sunk more than a foot into desiccated carpets of cushion plants that, though they had thrived for several hundred years, had recently parched as their perennial water sources became ephemeral. We walked through newly born communities of plants and microbes that have blossomed behind the tails of retreating glaciers.

Three frog species have taken advantage of this new habitat, expanding their ranges 660 vertical feet upslope and setting the global elevational record for amphibians at 17,700 feet above sea level: the marbled four-eyed frog, the Andean toad, and the marbled water frog. With nets and bags, we captured these new arrivals — colonists of narrow mountain passes, regularly blanketed in snow or hail, where solar UV is relatively unfiltered by the atmosphere and night covers the ponds in sheets of ice. Cracking pond ice with the butts of our tadpole nets or digging under snow to flip rocks, we had daily cause to marvel at these intrepid amphibians. But we also took careful precautions to not transmit Bd from one frog or site to another during our fieldwork. As we crossed the landscape, we sterilized equipment between animals and after anything touched the ground.

I am exploring two mechanisms by which climate-change-driven range expansions might influence the disease dynamics of Bd — and thus the die-offs — in frogs. First, each time frogs colonize farther up the mountain passes, the colonists are not entirely representative of their source population. Instead, a small number of juveniles migrates forward. They may represent a random subset or perhaps individuals with traits that enhance their movement capability (e.g., strong back legs). In this way, each “founder event” reduces the biological variation present relative to the source population, including the genetic variation underlying frogs’ physical traits.

When expansion occurs rapidly over a large distance, genetic variation may be lost simply by chance, rather than because it is not useful. Frogs’ susceptibility to infection by the Bd pathogen can be influenced in several ways by their genetics. Studies have shown that having specific versions of particular immune genes or inheriting different versus identical versions of genes from each parent can affect frogs’ Bd resilience. Therefore, I suspect that frogs on an expanding range front may be more susceptible to the Bd pathogen because variation conferring resilience may have been lost by chance and because these frogs are more likely to inherit the same gene versions from both parents. 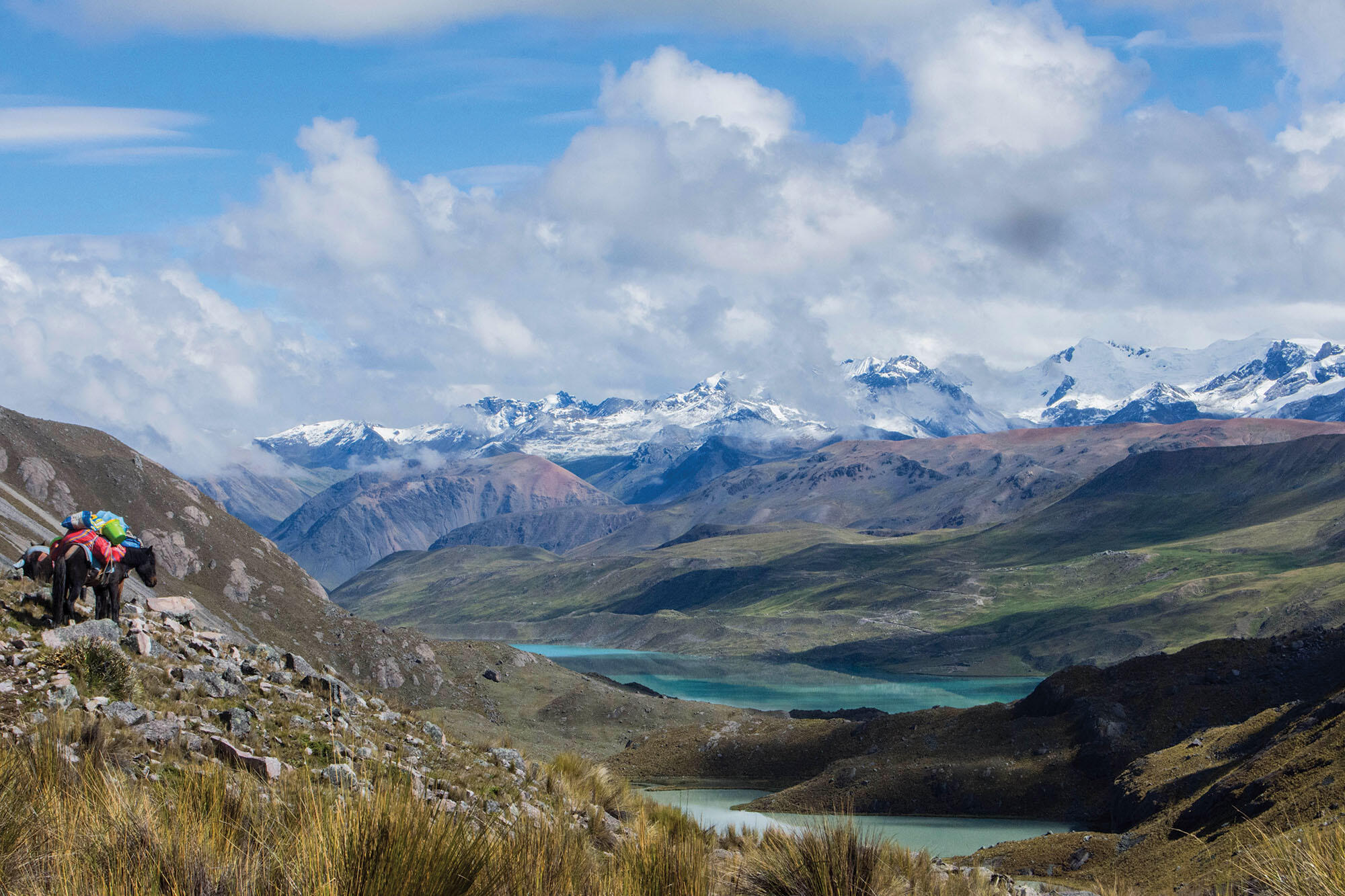 A second potential influence of climate-change-driven range expansions on disease dynamics concerns their effect on patterns of genetic exchange. Deglaciation opens new movement routes across the landscape by melting open mountain passes. The colonization of these passes may therefore allow for the interbreeding of groups of animals separated by the mountain barrier. For example, the final glacial “stopper” preventing movement across Osjollo, the longest pass in the Cordillera Vilcanota, melted in the late 1970s. Since the Cordillera has served as an 80-kilometer-long ice barrier across the landscape for perhaps as long as five millennia, frogs colonizing the newly melted mountain passes may now be interbreeding with frogs with which they had accumulated genetic differences over time. I am curious if this opportunity for new genetic exchange improves the Bd resilience of these frogs. If it does, I will resolve whether general “hybrid advantage” or specifically the effect of interbreeding on immune genes is responsible.

The Cordillera Vilcanota is a perfect example of a landscape that at times appears nearly pristine, while local flora and fauna are, in fact, silently dealing with compound anthropogenic pressures. Dazzlingly turquoise waters tumble from the slopes. Miniature alpine plants coat the ground with delicately intricate structures. Human population density is so low that you can walk non-stop for a week without seeing a fence or a person. Yet, beyond the control of residents — human and other living creatures — the meltwater streams are drying. Glaciers are vanishing. Some species are changing their distributions as conditions change, but each species does so in its own unique way, changing the composition of biological communities.

It is in this context that a novel pathogen, which likely emerged in Asia and only spread this far with the trade of amphibians by humans, has swept across the Cordillera Vilcanota. The three frog species I am studying have used accelerated deglaciation as an ecological opportunity to expand into new upslope habitat. We might, then, consider them successful climate responders and be less concerned about their long-term persistence. However, in a context of compound pressures, what if a successful response relative to one pressure moderates genetic susceptibility to a second pressure, like disease? Populations’ histories may be invisible to the naked eye, but modern genetic sequencing approaches allow me to measure the imprint of these histories and understand how they might affect the present and future of these populations.

The people of this region continue to dedicate themselves to the hard work and fickle rewards of cultivating tubers and raising alpaca. However, their anxiety over their changing landscape is palpable. Their future options are narrowing. When we explained that we were studying frogs, some people responded that we could work with them only if we did not hurt or distress them — despite the disgust they invariably expressed that we should even want to handle them. Their culture’s traditions have left them with some deep-seated beliefs about the connectedness of organisms and their ecosystems. With my study of the Cordilleran frogs, I hope to shed light on a small fragment of that dynamic connection.

Emma Steigerwald is a Ph.D. student in the Department of Environmental Science, Policy, and Management at UC Berkeley. She was the recipient of a research grant from the Tinker Foundation and CLAS in 2018. 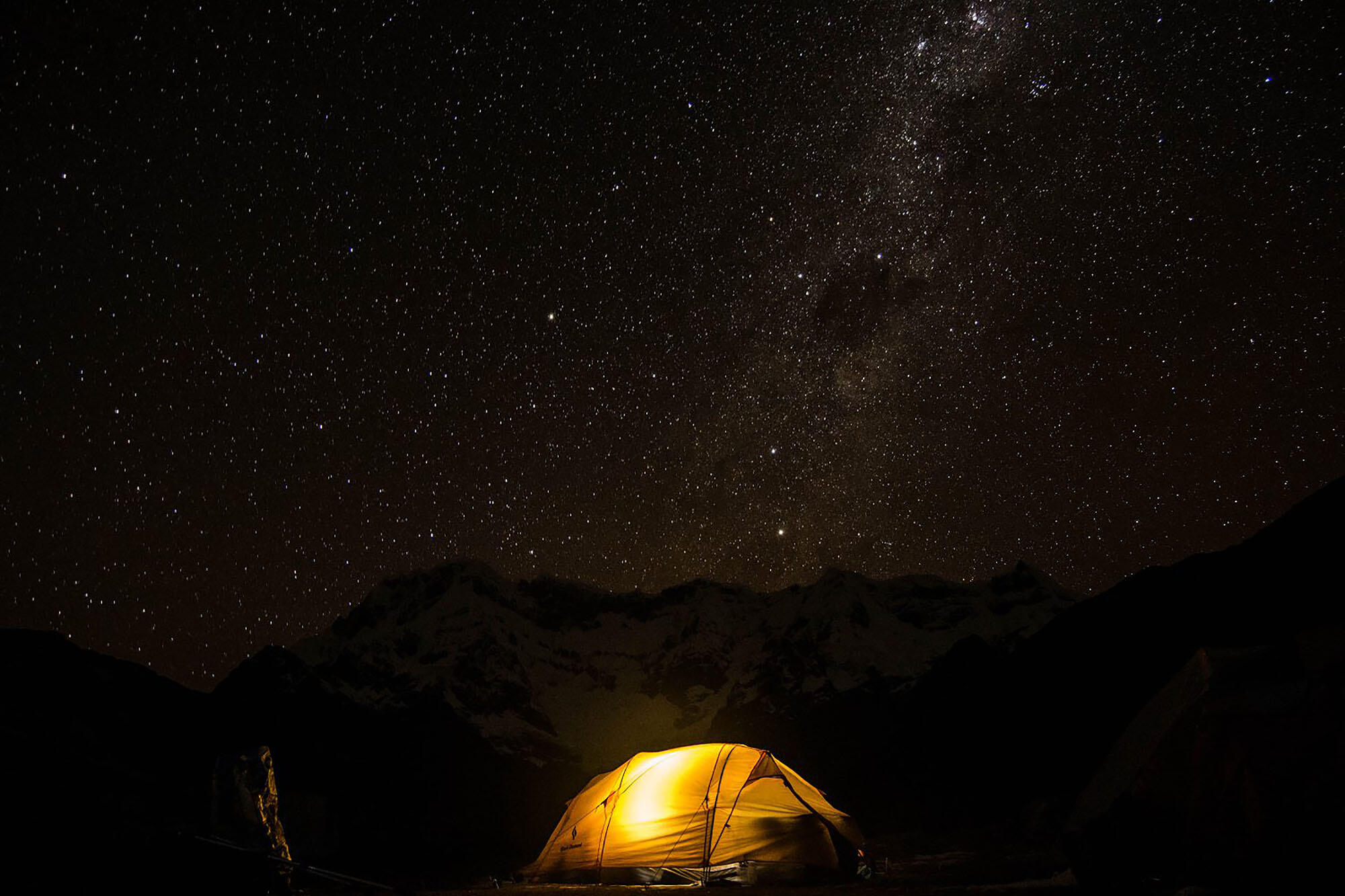 Legends associating frogs with rainfall did not emerge only for obvious reasons. Tradition dating back to Incan culture, and possibly back to pre-Incan tradition, named not only the bright stars of the heavens, but also the negative space around the stars—the “dark constellations”. Hanp’atu, “the Toad”, was a dark constellation that rose from the horizon synchronously with the first seasonal rains.