AGRICULTURE: Native Pollinators and the Avocado 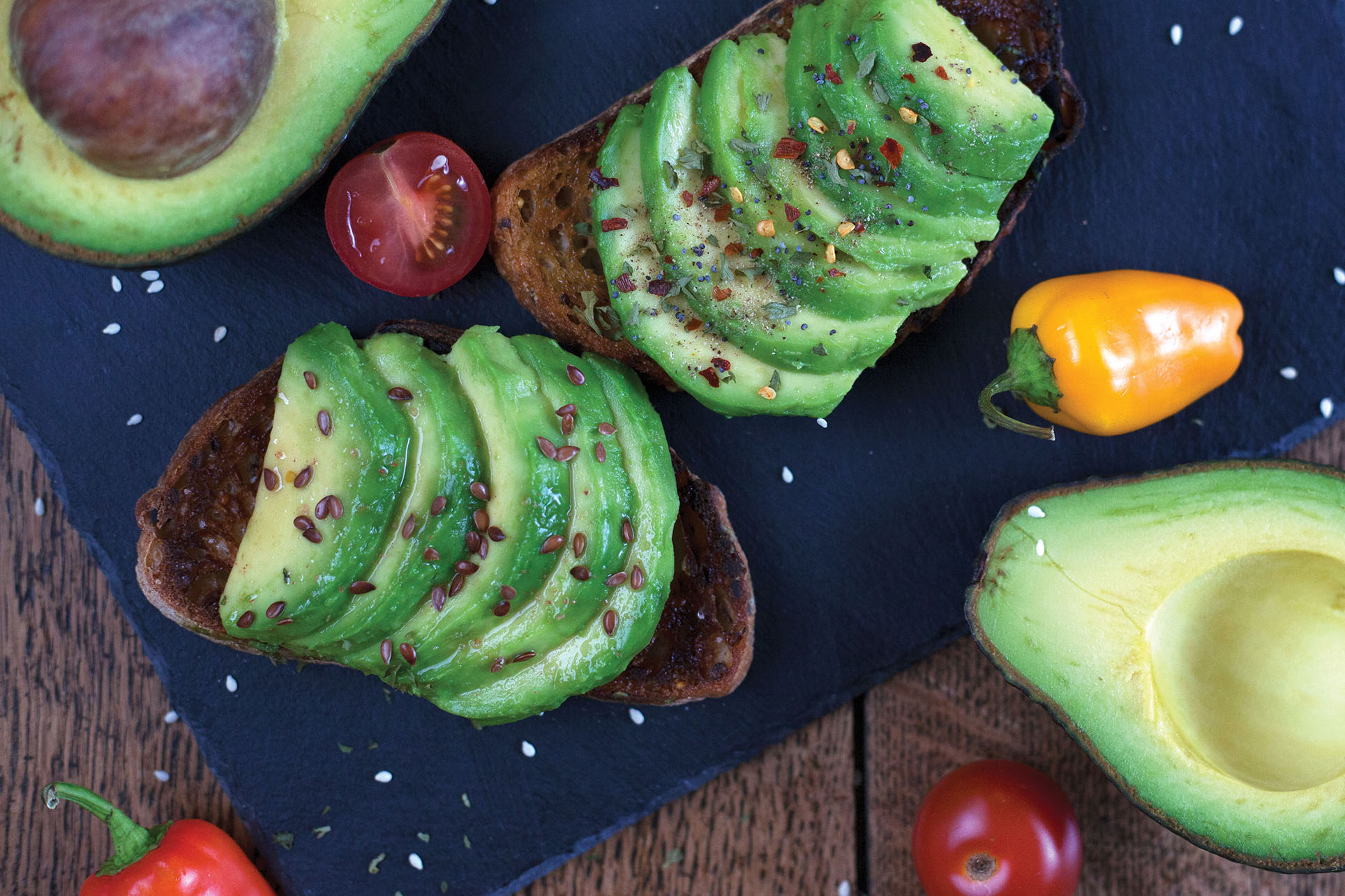 Where does your guacamole come from? A local Mexican restaurant? Or do you make it yourself from scratch? Do you prefer your avocado on toast with pink Himalayan salt? Or Chilean style as pan con palta?

Have you ever wondered how it all begins with avocado flowers on an evergreen tree?

Any delicious avocado dish starts with tiny cream-colored blossoms, which are about the size of a pea and grow in clusters called racemes. The flowers are not showy or fragrant, but that doesn’t matter to the dozens of insect species that are attracted to the flowers in spring.

In early spring, each avocado tree is covered with more than 1 million of these unique and beautiful flowers. Despite abundant flowering, each tree only produces 100 to 500 fruits each season. This limited fruit production is due to the fact that each flower alternates between a female stage (pollen accepting) and a male stage (pollen producing), and male and female flowers often aren’t present at the same time on the same tree. Insect pollinators must move pollen from male to female flowers, flying from flower to flower and tree to tree. A certain amount of fruit drop is also expected. 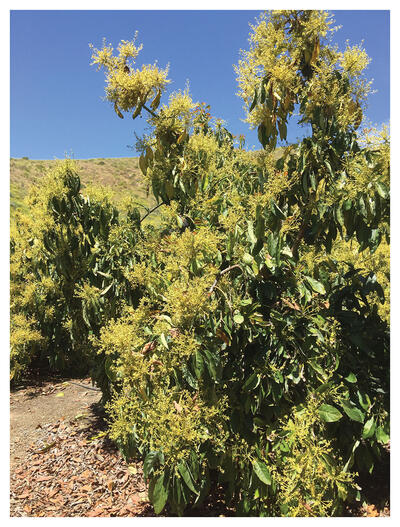 The avocado, Persea americana, is native to Mexico and the Central American tropics. Dating back to prehistoric times, large mammals were the primary dispersers of avocado seeds. Mammoths and giant ground sloths (genus Megatherium) ate the fruit and spread the seeds in their scat.

Today, the green-skinned, pear-shaped fruit is grown commercially in many places around the world, including Mexico, Chile, Peru, New Zealand, South Africa, Israel, and California. In many parts of Central America, avocados represent a significant portion of the diet. In each exporting country — including Mexico, Chile, Peru, and Colombia — avocados represent a significant part of the agricultural economy. Mexico produces more avocados than any other country, growing more than 900,000 metric tons annually, or 40 percent of the world production (Can-Alonzo et al., 2005).

Avocado seeds have been found in the remains of temporary encampments dating from nearly 10,000 years ago as people moved down the Pacific coast from Mexico towards South America. The fruit is highly portable and nutritious and is one of only a few fruits with a full complement of amino acids that goes perfectly with corn tortillas. Avocados also contain energy-rich oil that is low in cholesterol.

In avocado orchards around the world, a diverse assortment of insects visits the flowers, from bees and wasps to flies and beetles. A study in Mexico (Castañeda-Vildózola et al. 1999) recorded 70 different insect species visiting avocado flowers. In southern California orchards, some 60 species of insects are attracted to the delicate flowers (Frankie et al., 2021). About one-half of these insect species are California native bees; the rest are mostly flies and wasps. The approximately 30 bee species that visit avocado flowers in California are there for pollen and nectar produced by the flowers.

Honey bees and bumble bees are social insects that live in large colonies. All other bee species are solitary in habit. Of the approximately 1,600 bee species recorded in California, most are solitary and make their nests in the ground (about 70 percent). The remaining 30 percent are solitary and cavity nesters, which means they live in natural crevices like tree holes or cavities left behind by wood-boring insects.

Here are some of the most common insect species visiting avocado flowers in California.

The ultra-green sweat bee (Agapostemon texanus, two images below this paragraph) is the most common solitary native bee species in California. Smaller in size than the honey bee, this sweat bee has a brilliant metallic-green exoskeleton and flies quickly from flower to flower. These bees are ground nesters and are active for many months of the year. Ultra-green sweat bees are especially common during the flowering season of avocados in the spring. In addition to avocado flowers, ultra-green sweat bees can be found on bush sunflower, globe mallow, and Calandrinia flowers. 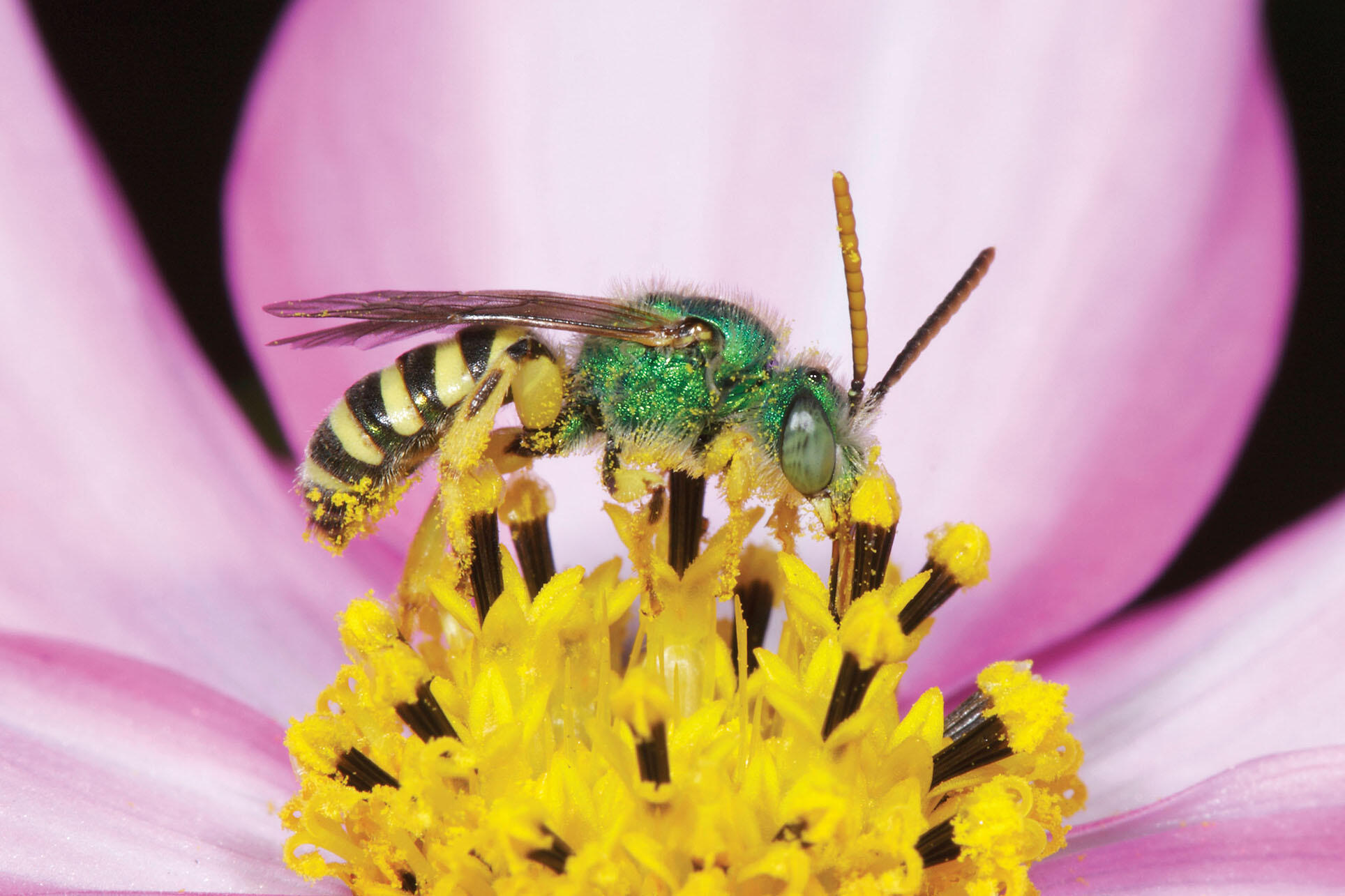 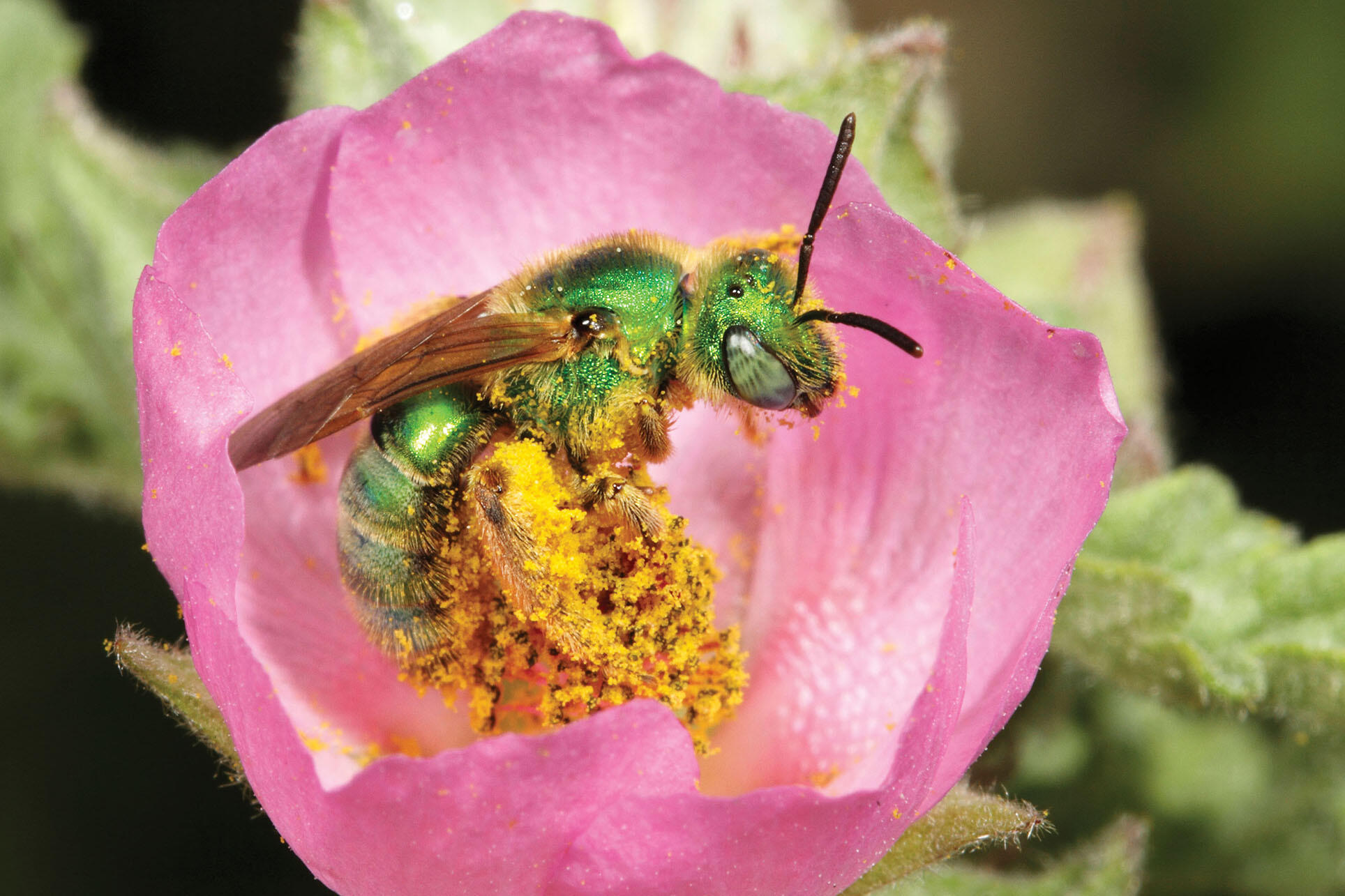 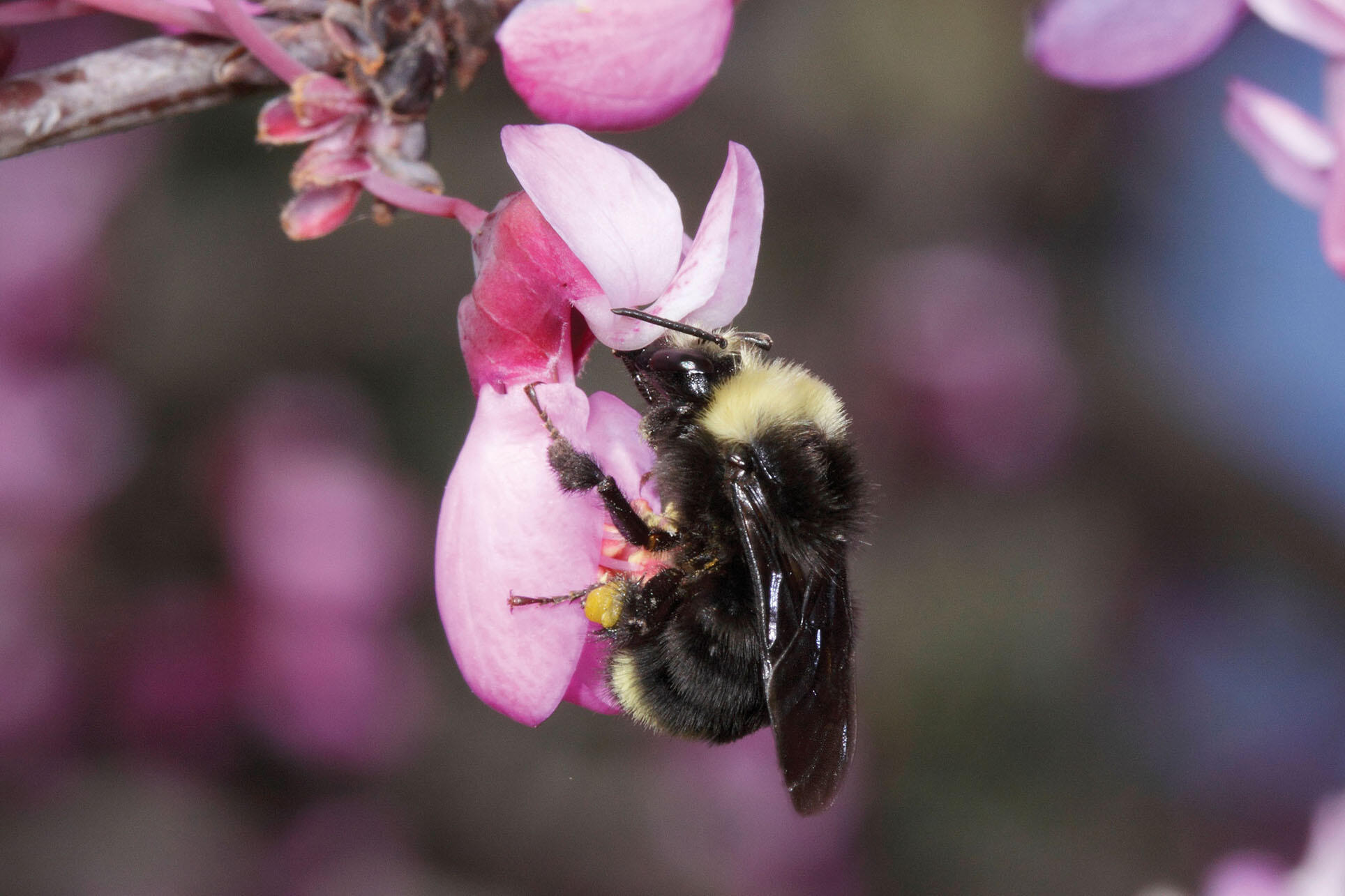 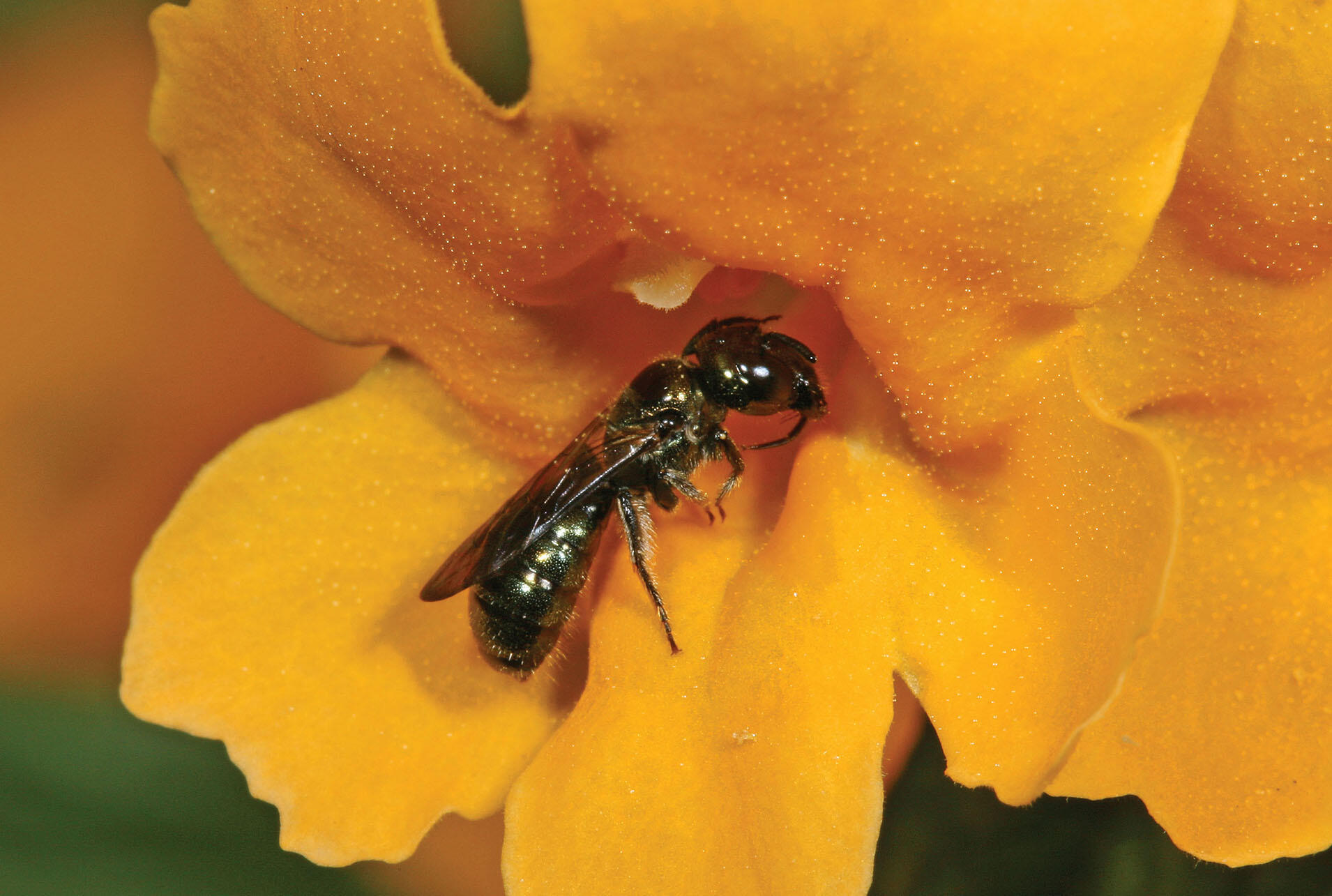 Hoverflies (Syrphidae, below) are another beneficial insect group that visits avocado flowers. Adult flies pollinate the flowers, and immature larvae feed on aphids and other herbivorous insects that eat ornamental and crop plants. Hoverflies pollinate many other plant species in addition to avocados.
On top of this array of native insect visitors comes the European honey bee, Apis mellifera, which California growers favor because they can transport hives to control the numbers of bees needed to pollinate the standing crop of trees in an orchard. Curiously, the honey bee is not known to be very attracted to the avocado flower. But honey bees don’t have much choice when their hive boxes are placed in an orchard and there are few other flowers from which to choose — avocado growers usually keep their orchards free of flowering weeds, many of which are attractive to native bees, flies, and wasps. 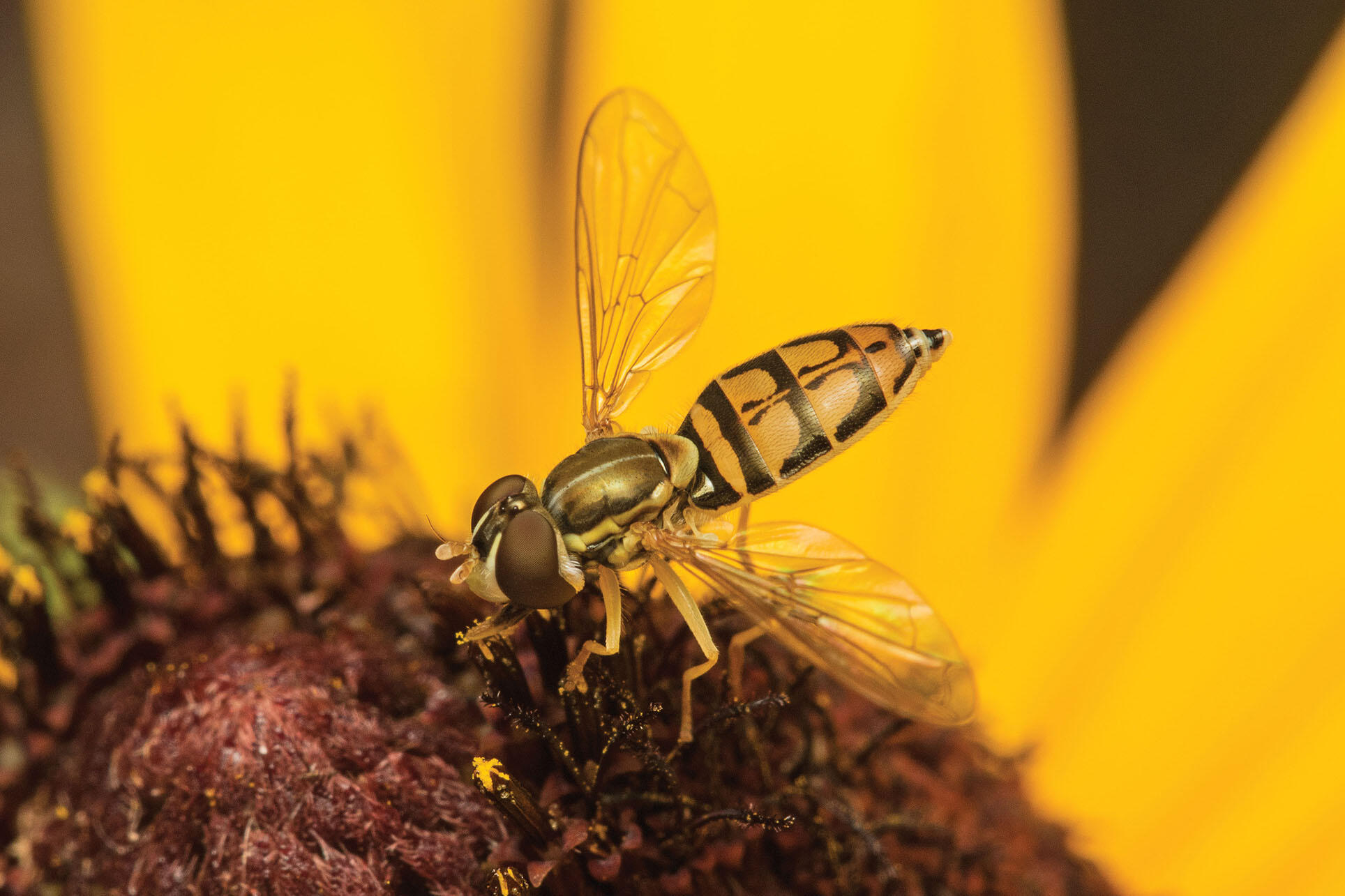 Studies have shown that honey bee populations are declining in the United States and in many other parts of the world. While these findings are troubling for many reasons, including those related to agricultural production in general, for avocado growers this decline means the cost of renting honey bee hives continues to increase. UC Berkeley’s Urban Bee Lab and many other researchers worldwide are interested in providing habitat for native pollinators in agricultural settings in the form of hedgerow gardens. Researchers want to know more about native insect pollinators, their needs, and their effectiveness as pollinators as they will become more important in agricultural operations.

So what about these other insect pollinators? How many of them can pollinate avocado flowers? Which are the best pollinators, and shouldn’t we know more about them? These questions motivated the Urban Bee Lab to start a long-term research project in 2014. Our efforts are just now beginning to produce useful results that can be passed on to growers in southern California. This information may also benefit avocado growers in other parts of the world, especially in Latin America where many native pollinators have co-evolved with avocado flowers and where avocado pollination by diverse pollinators has been the focus of studies in the region (Pérez-Balam et al., 2012; Can-Alonzo et al., 2005).

In an early stage of our project, the Urban Bee Lab established a series of pollinator habitat gardens to attract diverse insect visitors and pollinators in three large avocado orchards in Santa Barbara and Ventura Counties in southern California. The flowering plants installed in each garden were the result of years of research on bee–flower relationships conducted by the lab throughout California. Our book, California Bees and Blooms: A Guide for Gardeners and Naturalists (Heyday, 2014), offers a close-up look at some two dozen local bee species and shares useful information on growing bee-friendly plants.

Once the gardens were in place, we intensively monitored native bees and honey bees in the participating avocado orchards each spring from 2014 to 2019. Bees were observed in pollinator habitat gardens or “treatment sites” and in areas with no gardens, the “control sites.” The comparative numbers indicate that the garden sites are supporting more diverse bee species, and this pattern can be tied to the diverse flowering species established in the gardens. It is noteworthy that differences in bee diversity between the treatment and control areas were not as great as one might expect, and this finding suggests that native bees are regularly flying through the orchards.

As part of the outreach component of our project, the growers of each of these three orchards have been kept informed of the results of the studies. This communication has led to requests for more habitat gardens and expansion of existing gardens on each property. Growers have also offered resources — such as irrigation equipment, labor, and water — to help us move the research forward. In other words, they have taken some ownership of the project. We expect that the installation of larger gardens will increase the number of diverse insect visitors to avocado flowers in the future.

And there’s so much more to learn about pollinators and their relationships to avocados. In New Zealand, researchers have discovered that some avocado flowers stay open at night and draw in diverse nocturnal insect visitors. Because environmental conditions between New Zealand and California are similar, we wondered whether California also has nocturnal visitors to avocado flowers. Our UC Berkeley Urban Bee Lab is just beginning research on this issue in California. Many hours of observations at night with special cameras (and lots of coffee) will be required to determine whether we also have nocturnal flower visitors in the state. We also suspect that there may also be nocturnal pollinators of avocado flowers in tropical Latin America.

Other new plans for research include evaluating the effectiveness of each insect visitor to avocado flowers. This work is being designed with colleagues from UC Santa Barbara who have expertise in pollen studies.

We also will be working closely with the UC Cooperative Extension, Ventura, to develop a user-friendly manual that can be passed on to growers, with macrophotography of most of the insect visitors to avocado flowers and images of the garden plants insect pollinators prefer. Regular discussions with avocado growers are proving very helpful in developing the extension manual.

Much work remains to be done to gain more information on the pollination ecology of avocados in California. Especially important is learning more about the most effective ways to protect avocado pollinators as a part of the avocado pollination system, which includes creating and caring for insect habitat in and around avocado orchards. This research could also serve as a model for avocado growers in Latin America and in other parts of the world.

Gordon Frankie is Professor Emeritus and a research entomologist at UC Berkeley. His specialty is behavioral ecology of solitary bees in wildland and urban environments of California and Costa Rica.

Sara Witt is the Lab Manager for the Urban Bee Lab at UC Berkeley and an ecologist for the nonprofit organization Grassroots Ecology, which works to restore habitat in the San Francisco Bay Area.

Ben Faber is the Soils/Water/Subtropical Crops Advisor for the UC Division of Agriculture and Natural Resources in Ventura/Santa Barbara Counties. He has degrees in pomology, irrigation, and soil fertility.

Rollin Coville has been photographing insects and spiders for more than 25 years. He received his Ph.D. in Entomology from UC Berkeley. 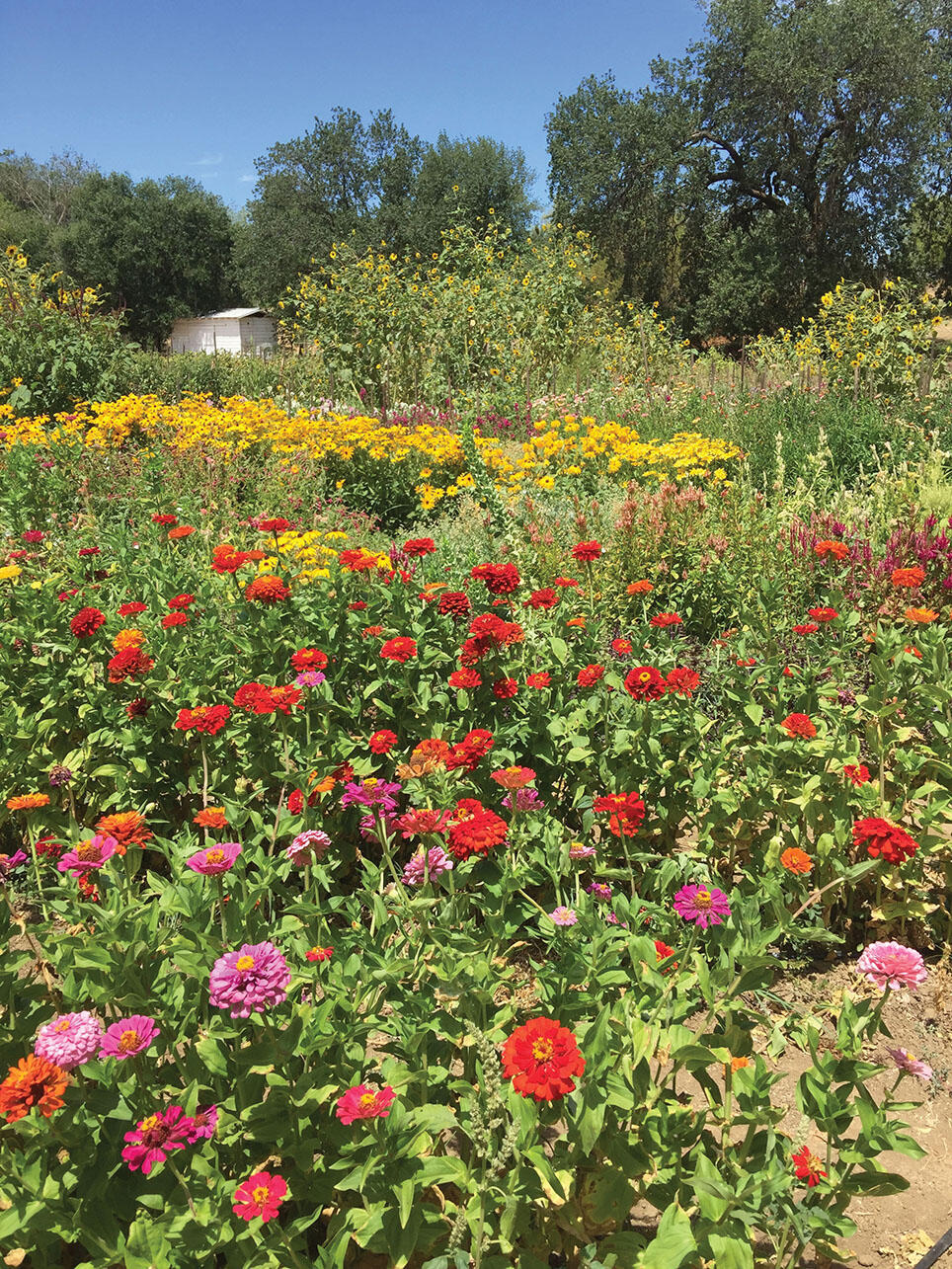