A Modern-Day Nahua Artist from Chicontepec 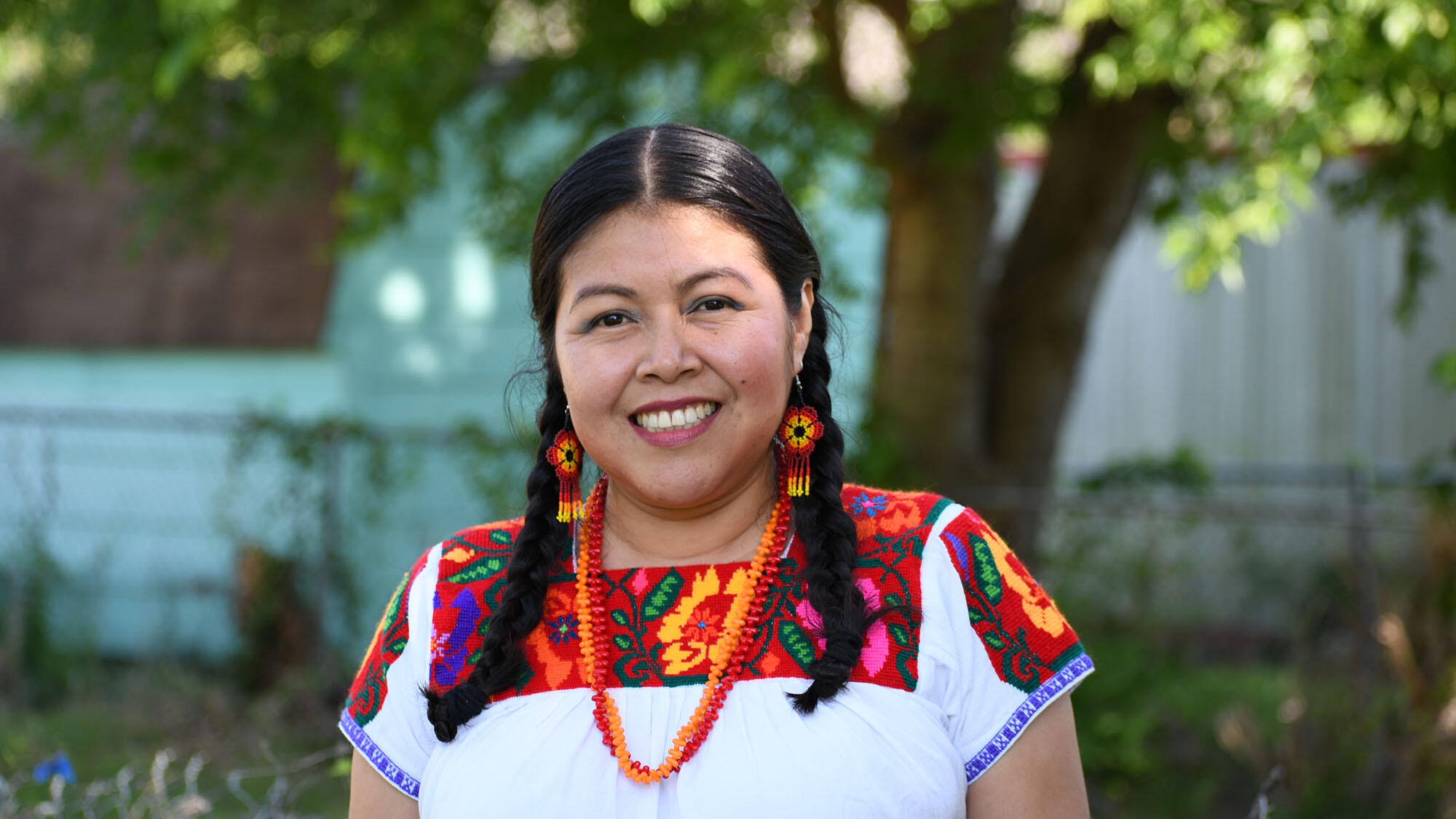 It is my pleasure to present Norma Martínez, a Nahuatl speaker whose intellect shines through her work. Based on interviews from 2015, as well as more recent conversations, this short biography shares her life story, from her origins to her recent artistic endeavors. The work and life of this painter will be of interest to all but especially to young people who speak a Mexican language, as it may serve as inspiration for their own artistic explorations.

Norma Martínez Martínez was born on November 29, 1979, in the small community of Lindero, Xoquixhual, in the Municipality of Chicontepec, in the north of the Mexican state of Veracruz. Norma spent her childhood and teenage years in her community of origin with a loving and supportive family. Norma’s parents worked in the milpa (corn fields), and her mother also cared for their home. When Norma was a girl, she watched her parents working in the milpa and wanted to go with them, but they wouldn’t let her. So she explored the forests and rivers and only visited the family field once in a while.
Norma went to elementary school in her own community. To attend a televised high school in 1991, she had to travel to the town of Tepoxteco. Every morning, she had to walk for an hour to get to school early. “I loved to walk, and I always took the paths to school, even though it was raining sometimes,” Norma says. “I already had friends in Tepoxteco, so I liked walking in the mornings even more.”

She had excellent teachers at the televised high school, and she learned a great deal from them. She also learned some sports as well as some forms of art that she had never experienced before. One day, her teacher Oscar Sánchez gave the students the assignment of painting a picture: they were supposed to draw something and then finish the work using an assortment of paints. Norma sadly recalls, “I wasn’t able to do that assignment because my father didn’t give me money to buy the paints.” When she showed up for school, the teacher told her, “You didn’t do your work well.” Norma was very upset that she couldn’t finish the assignment. “Do it again,” her teacher told her. So Norma drew and painted the mountain called Poztectli, and that drawing turned out really well. Her teacher liked it a lot, too. Norma had no idea that she could draw, but after that, she started drawing whatever she liked. Afterwards, she continued her secondary education outside of Chicontepec.

When Norma graduated from high school in 1995, her parents sent her to study in the Municipality of Tantoyuca, Veracruz, where there was a very good preparatory school. She also continued to hone her skills as a painter in Tantoyuca. In prep school, Norma began to create more elaborate works, drawing some of her friends. In 1999, Norma left to attend the university in Saltillo, Coahuila. She studied for a degree in Engineering in Food Science and Technology at the Universidad Autónoma Agraria “Antonio Narro,” and at the same time, she also began to study much more about painting. She did landscapes and nudes, as well. From then on, she also began to sell some of her art.

In 2002, just after she finished her studies in Saltillo, Norma went to live in the city of Monterrey, Nuevo León. She started working in her field, but she never forgot her true calling. She explains that in 2015, “I was working a chocolate factory, where they paid me well, and I also worked at home, and sometimes, I sold my paintings. Selling my paintings, I would also sometimes earn a little money but not always.”

In time, Norma had her own house in the Municipality of Escobedo, Nuevo León. In her art, she uses a range of techniques: oils, pastels, charcoal, and acrylics. Norma enjoys painting her life in Nuevo León. That’s why she drew the Cerro de la Silla, a mountain in Monterrey, but she painted it with the silhouette of a naked woman.

As an artist, she preserves her connection with the land of her birth. That’s why she creates paintings about the culture in relation to the macehualmeh ininnentlan, the “geographic context of Nahuatl speakers.” Norma loves incorporating things that she loves in her paintings, as well as sometimes including what she does not like about the life of the macehualli or Nahuatl-speaking people. For this article, Norma has shared two paintings: Icniuhtlan “Friendship” (2018) represents the connections that members of the Nahua culture have with the land of their origin or of their people, and Tlamacahualiztli “Farewell” (2017) represents Nahua people in a cemetery saying goodbye to an ánima (the spirit of the deceased). In that painting, Norma portrays the death of her grandmother. 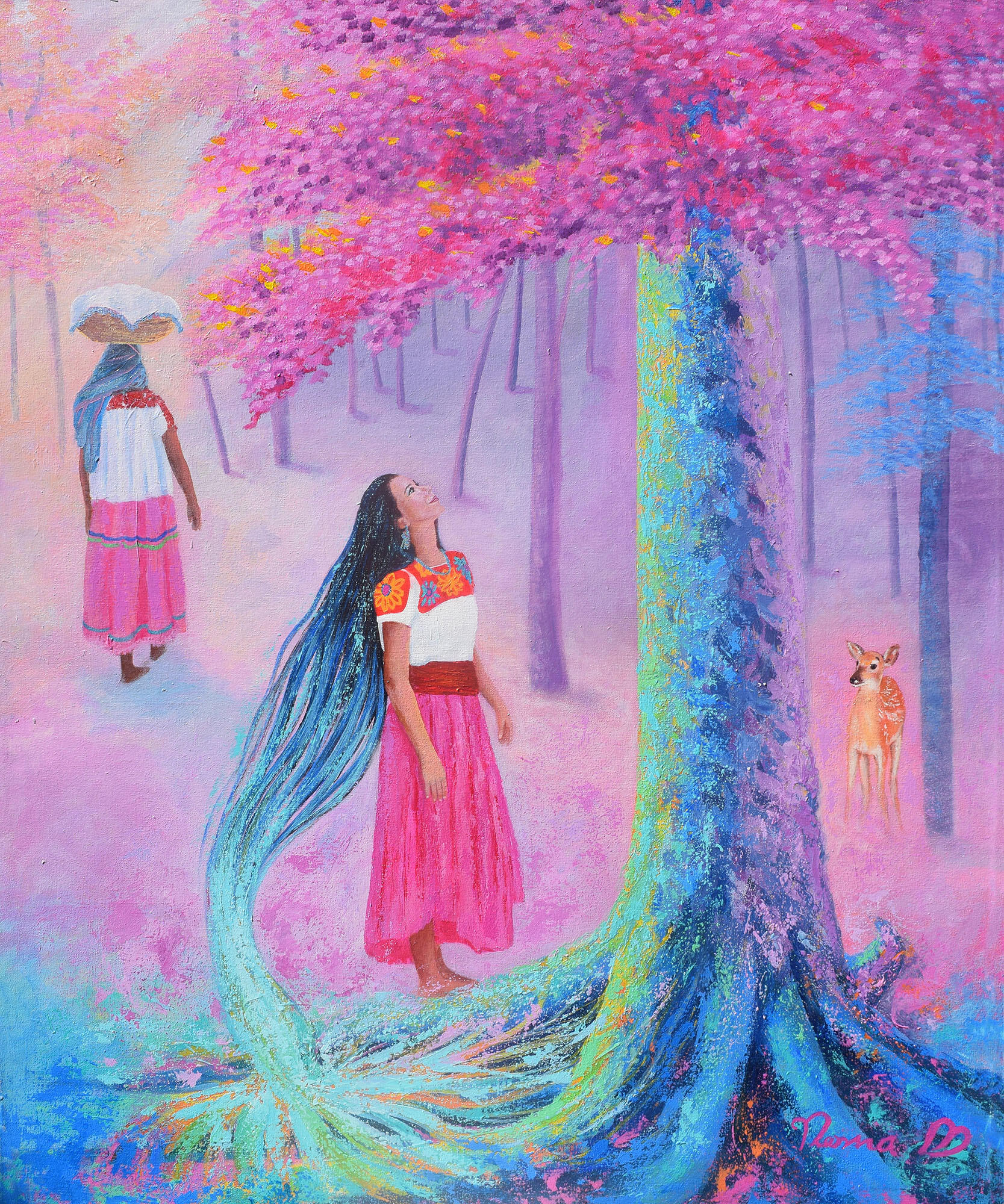 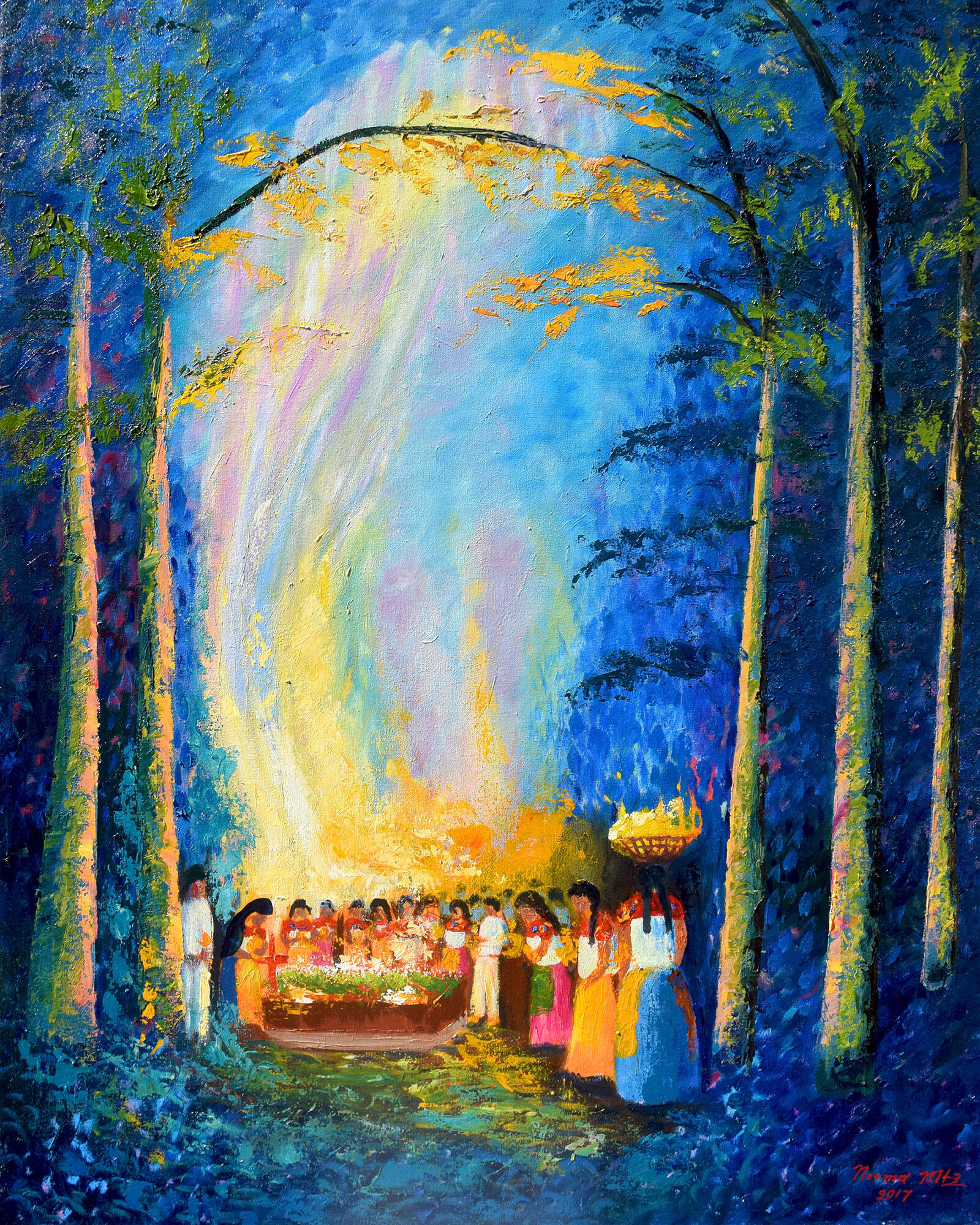 A few years ago, when Norma was studying engineering, some of her works were shown at the Universidad Autónoma Agraria “Antonio Narro” in Coahuila. From then on, she started holding expositions with other women, like the one called “Cuatro Mujeres, Cuatro Sentimientos, Cuatro Mujeres de la Narro” (Four Women, Four Feelings, Four Women from the Narro). Today, Norma works in the state of Nuevo León, Mexico, and has presented her works in exhibitions at Yale University (2017), the University of Texas at Austin (2018), and University of Utah (2019). Norma is a Nahua woman who does something very few Nahuas do. As she stresses, “I love to paint so much because it makes me strong.”

There are many people from the communities of Chicontepec living throughout Mexico who do exceptional things. Unfortunately, we don’t know much about them because there is not much contact among us. We only sometimes hear that someone is doing something somewhere. Norma concludes her story full of emotion: “I quit my job at the chocolate factory on July 5, 2021, to completely dedicate myself to art. It’s something that I had already planned a long time ago.” Like so many Nahua people who follow their dreams as best they can, Norma is living her life and making her plans just as she wants: now, she continues to develop her art and dedicates herself to painting full-time.

Abelardo de la Cruz is a Ph.D. student in the Department of Anthropology at the State University of New York, Albany. His mother tongue is Nahuatl, and he currently serves as an instructor of the language at UC Berkeley and the University of Utah.

Deborah Meacham translated the English-language version of this article from the Spanish.

John Joseph Sullivan was guest editor for the Spanish and Nahuatl texts.