Human Rights in Chile: Then and Now 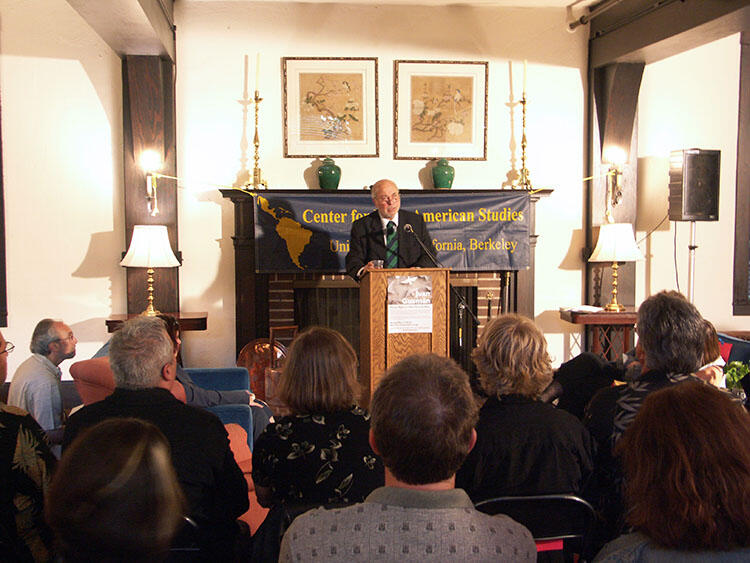 Despite the death of former dictator Augusto Pinochet and the work of the National Commission on Political Imprisonment and Torture, Chilean efforts to end impunity remain mixed. Although some of the dictator's former henchmen have been indicted, more than 20 military officers complicit in Chile's Dirty War remain unpunished. Judge Juan Guzmán will discuss the state of human rights 17 years after Pinochet's dictatorship.

Judge Juan Guzmán spent seven years overseeing the Chilean case against Pinochet and is Dean and Professor of Procedural Law and Professional Ethics at the Universidad Central de Chile School of Law.

Judicial Independence and Its Link to Human Rights
By Javiera Barandiarán

Over the past two decades, democracy and economic development have taken root in Chile. However, during this period there has been a lack of serious discussion among elites about the efficacy of Chile ’s institutions and the distributional consequences of development. The judicial branch, in particular, deserves special scrutiny. How the judiciary underwent the transition from dictatorship to democracy and how this impacts the human rights of indigenous peoples today, deserve critical discussion not just among academics but also among the country’s political, economic and social elites.

During his CLAS talk, Judge Juan Guzmán, who spent seven years overseeing the Chilean case against former dictator Augusto Pinochet, argued that the process of judicial and political democratization in Chile is characterized by “one step forward, two steps back, in the style of a Zorbas dance.” While recognizing the great difficulties involved in processing a dictator for past human rights abuses, Guzmán highlighted the series of coincidences and ingenuity necessary for such a process to take place in a developing country.

The institutional design Chile inherited from the dictatorship was a mixed blessing. The 1980 constitution laid the foundations for a functioning, representative political system to succeed Pinochet’s military dictatorship, but at the price of installing important vestiges of authoritarian power. Key among these, from the perspective of human rights, were the amnesty laws of 1978 that pardoned all involved with the repression that occurred from the 1973 coup onwards. The magnitude of the political persecution was immense: thousands were hunted, illegally detained, tortured and killed. The Chilean government today recognizes 27,255 persons as victims of the dictatorship and 1,200 remain unaccounted for according to Judge Guzmán. However, the majority of these abuses were committed before 1978 and are covered by the amnesty laws.

Another critical barrier to democratic progress includes the three-fifths majority required in the Senate and Congress to enact constitutional reform. In Guzmán’s view, this is an extremely high threshold given the degree of party fragmentation that exists in Chile . In this context, the degree of politicization of the judicial process was severely criticized by Guzmán. Because senators are responsible for appointing judges, the judicial system went from being somewhat politicized to being “absolutely political” in the transition from the first democratic government to the second, under President Eduardo Frei. On being appointed, judges had to openly state their political party affiliations, Guzmán explained.

One of the system’s key weaknesses, as described by Judge Guzmán, is the absolute importance of individuals. Far from the ideal of autonomous institutions that run on internal rules subject to public accountability, justice in Chile depends too much on the personalities involved in specific cases. A judge’s case load is decided by lottery and subject to the “law of accumulation,” meaning all similar cases are assigned to the same judge. The legal future of a case depends almost entirely on whose hands it lands in and, presumably, the more high-stakes the case is the greater its dependence on personal convictions and energy. In 1998, a suit filed on behalf of a victim of the dictatorship landed in Judge Guzmán’s hands. In just a few years, 250 cases of this type accumulated on his desk. Despite the setbacks and political pressure, Judge Guzmán had the will and energy to persevere with the cases.

In order to prosecute the cases, Judge Guzmán had to overcome two legal hurdles: the 1978 amnesty and concerns about Pinochet’s health. Working with other legal professionals, Guzmán argued that, for those who were still missing, the amnesty laws did not apply because the crime — abduction — was in fact still being committed. While this limited the number of cases that could be filed, at least some room for legal action was opened. The second, and much graver setback, was concern about Pinochet’s mental health as he aged. This consideration led to the dismissal of several cases against Pinochet and eventually ended the criminal processes against him.

Arguably, the political setbacks were even more grave than the legal obstacles. As the individual judges involved changed, “no political or judicial will to try people [involved in the dictatorship’s human rights abuses]” remained. This has important consequences for the present and future of human rights in Chile . Today, the cultural and historical rights of indigenous populations are at the center of concerns about how political institutions treat Chileans. The past years have seen an increasing number of confrontations between indigenous peoples opposed to some development and economic projects and police powers. Judge Guzmán described how the Mapuche people have opposed the building of hydroelectric dams, paper mills and mines because of their impact on the environment and local economies. Many of these projects, argued Guzmán, are forcing Mapuches from their lands to the cities, destroying their communities and culture. Furthermore, the state’s force is once again being used against the people in a disproportionate way.

Expanding the concept of human rights to include cultural, social and environmental rights will require political commitment, not just legal arguments. Although Pinochet passed away last December without being convicted, the efforts to prosecute him yielded critical lessons for Chile . Many successful cases were brought against the military; the concept and legal status of amnesty and political immunity changed; and Chileans saw that, with political will, it was possible to prosecute state criminals. How these lessons can be translated into recommendations for insulating the judiciary from the political process and for strengthening Chilean human rights law is a task for the political elites to now undertake.

Juan Guzmán is Dean and Professor of Procedural Law and Professional Ethics at the Universidad Central de Chile School of Law . He spoke at CLAS on May 7.

Javiera Barandiarán is a graduate student at the Goldman School of Public Policy.