MEXICO: Communities Up in Arms 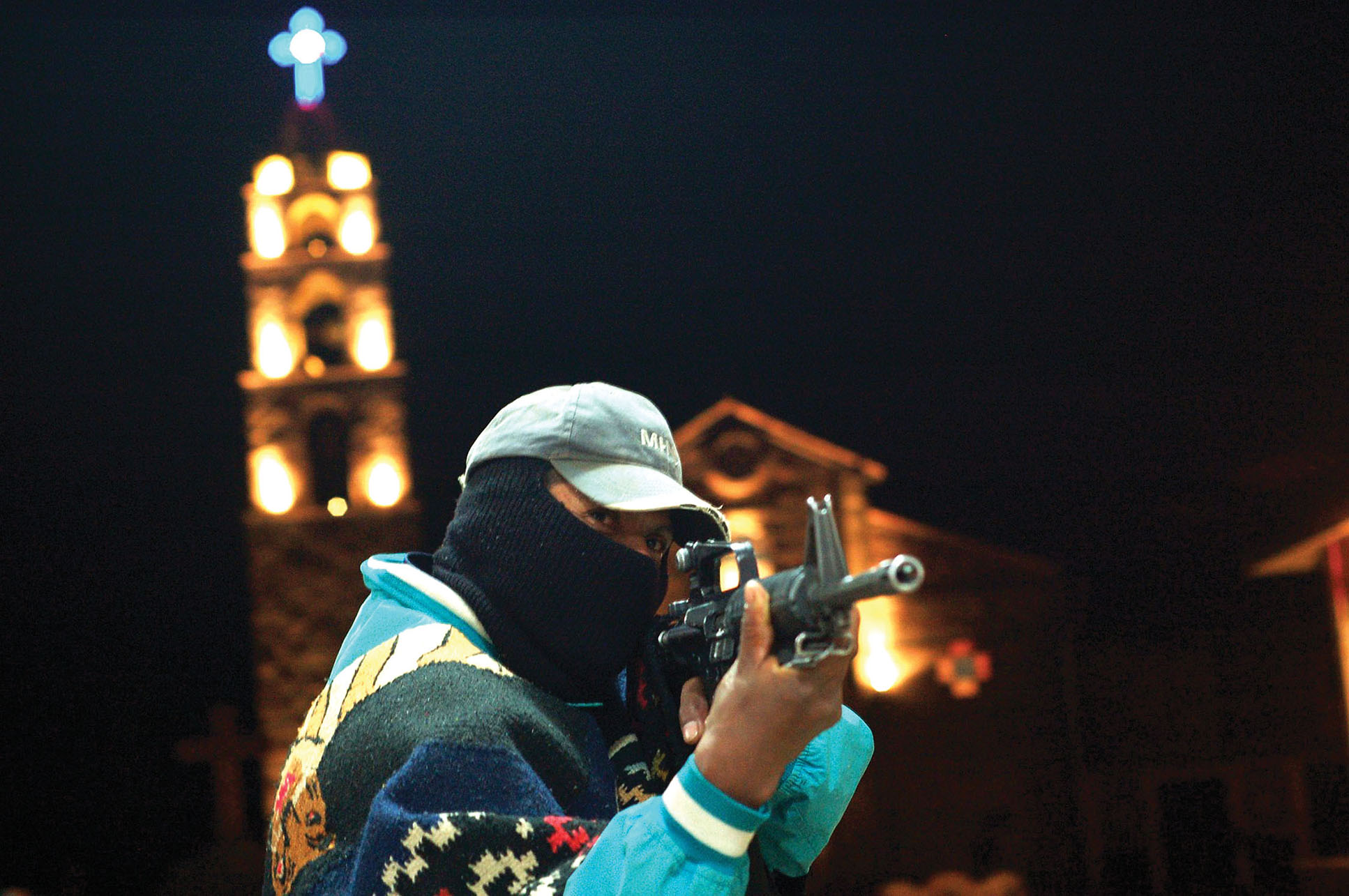 The emergence of armed self-defense groups in the state of Michoacán has catapulted the region to the top of the Mexican federal government’s list of security concerns. Not all of these groups are alike, however. While the indigenous P’urhépecha community guards and the mestizo self-defense groups share many common grievances, they have arisen in response to different histories and different contemporary circumstances.

Concentrated in central and northwestern Michoacán, the P’urhépecha home area is divided into four sub-regions: the Sierra P’urhépecha; the Lake Pátzcuaro basin; the Ciénega de Zacapu; and the Cañada de los Once Pueblos. Disputes about land ownership and access to natural resources have long made the region a hot spot for both intra- and inter-community violence. Although agrarian conflicts in the region date back to the colonial era, they were exacerbated by the agrarian reform initiatives following the Mexican Revolution, in large part because the distribution of lands to one community almost always impacted the interests of its neighbors. The reforms resulted in bloody clashes that sowed distrust between the communities. To further complicate matters, this infighting made it easier for outside interest groups to gain a foothold in the area. Revolutionary and post-revolutionary bandits devastated indigenous villages, taking advantage of their divisions. It was from this complex stew of conflicts that the community guards emerged.

The need to defend community rights and borders is one factor that led to a sense of besiegement among the P’urhépecha. Legal wrangles with the mestizo communities that benefitted from the agrarian reform (ejidos) led to bad blood, as did allegations that neighboring communities encroached on lands that did not belong to them. These conflicts contributed to episodes of agricultural sabotage, the illegal sale of communal lands, unregulated and illegal logging of communal forests, and the illegal exploitation of water resources.

An interplay between the ambitions of local leaders and the designs of paternalistic officials from the municipal, state, and federal government exacerbated divisions in the communities. Some indigenous leaders would ally themselves with a political party, usually the PRI or the PRD, in order to control local government and local patronage. They could then determine who had access to natural resources, such as timber and agricultural land, and make deals for their personal benefit. Government officials, for their part, pursued a divide-and-conquer strategy in dealing with indigenous communities and were happy to favor local groups that served their political agenda. The federal government also created institutions such as the Supreme Council of Indigenous Peoples and the National Peasants’ Confederation, which served to counterbalance “destabilizing forces” in the local communities.

Taken together, these practices caused dissatis-faction with the state and fueled a desire to re-shape the relationship between indigenous communities and the Mexican government.

The arrival of organized crime in the region was the final blow that caused long-standing indigenous discontent to harden into support for the community guards. Although drug cultivation is not new to the area — according to the anthropologist Salvador Maldonado, marijuana has been cultivated on the southern edge of the Meseta P’urhépecha since 1970 — it was only in the last decade that organized crime cells gained control of indigenous communities, displacing local authorities and buying off or intimidating community members. Local people have allegedly been the victims of extortion, kidnapping, rape, and murder. Criminal groups have also exploited the community’s natural resources, especially in forested areas. State authorities estimate that more than 80 percent of the Sierra P’urhépecha’s exploitable forest resources have been illegally logged in the past 10 years. In effect, P’urhépecha communities were being held hostage by criminal cartels, first by the Familia Michoacana and then by the Caballeros Templarios (Knights Templar).

When crime bosses attempted to subjugate the region, the indigenous people rose up in arms. The groups they formed, known as rondas or guardias comunitarias (community guards), are not new. They emerged in the aftermath of the Mexican Revolution as a means of community protection. According to Orlando Aragón, who serves as a lawyer for the highland town of Cherán, these groups historically patrolled communities and would respond to the presence of suspicious groups or individuals, often with violent confrontations or ambushes. The federal government eventually intervened with a military campaign to pacify the region, and the original community guards disbanded in the 1970s. 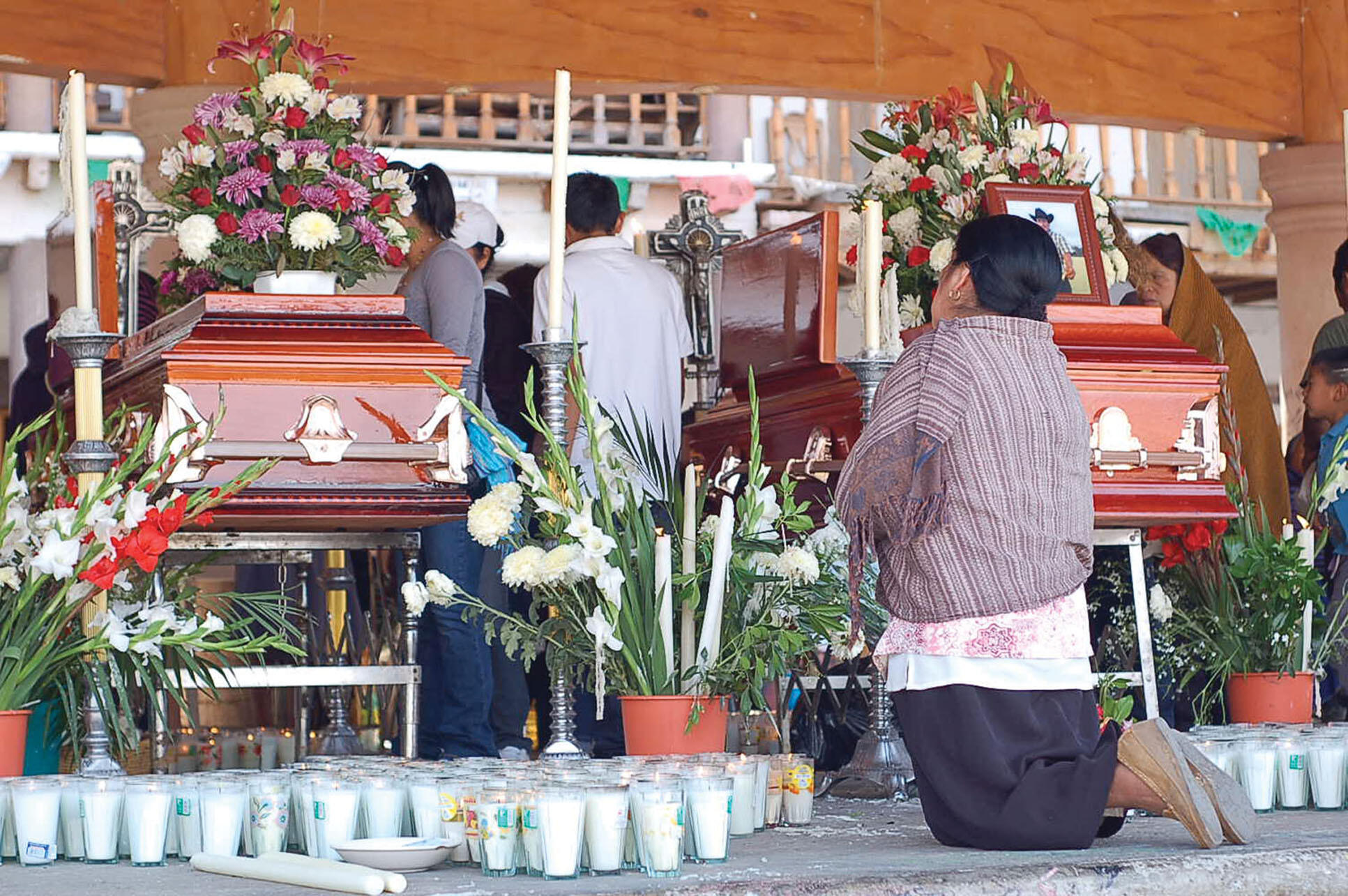 The rondas re-emerged in Cherán on April 15, 2011. There, organized crime groups had attempted to seize the community’s principal water source. Cherán’s women and children responded by openly protesting against this extortion attempt. Soon, the entire community joined them. The residents set up barricades at all the entry points into the community and decided to revive the past tradition of the armed rondas. Then, armed indigenous people expelled local authorities, police, and political parties and demanded that federal and state government authorities guarantee their community’s security, justifying their actions under Article 2 of the Mexican Constitution, which grants self-governance and self-defense rights to indigenous communities.

These developments were accompanied by community revitalization campaigns that made heavy use of cultural symbols and appeals to ancestral values. The community guards have come to rely on fogatas (bonfires), communal labor, the use of the P’urhépecha flag, and the image of the Virgin of Guadalupe. These tactics set them apart from the mestizo self-defense groups of the Tierra Caliente region.

The bonfires lit by community members serve as points where residents can gather to plan and make decisions. The bonfires have allowed Cherán’s residents to recoup a measure of ethnic solidarity, since the labor of building and maintaining them is divided along traditional gender roles: men gather the necessary lumber from the surrounding hillsides, while women maintain the fire and ensure that it does not go out. Because logging has long been a central facet of P’urhépecha identity, the bonfires and the labor related to them have acquired strong symbolic power.

Through mutual aid societies and ideas of traditional reciprocity, Cherán’s residents have commissioned local works with the aim of aiding the community guards. Each member of the community — including those who have migrated to the United States (an estimated 40 percent of the population) — contributes money, labor, or time to these works. 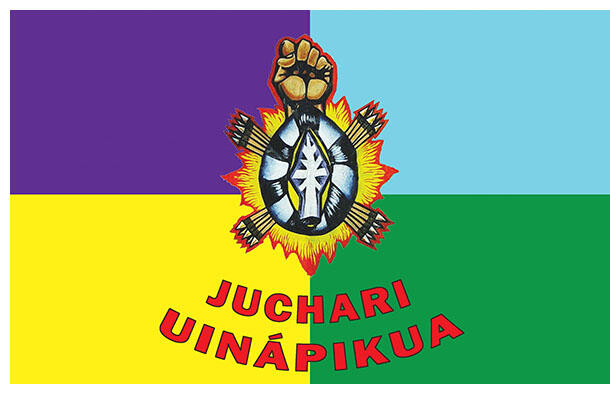 The P’urhépecha flag, which the community guards have adopted, first appeared in 1980 during a conflict between the indigenous community of Santa Fe de la Laguna and the mestizo city of Quiroga. It was conceived as a means of promoting P’urhépecha ethnic identity and solidarity. The flag’s four colors represent the four sub-regions of the P’urhépecha’s territory (green for the Sierra, blue for the Pátzcuaro basin, purple for Zacapu, and yellow for the Cañada). The center of the flag features a fist above a pointed piece of white obsidian; the fist represents the unity of the P’urhépecha communities, while the obsidian represents the pre-Colombian deity Curicaveri. Below this image are the words Juchari Uinápikua, which mean “Our Strength” in the P’urhépecha language.

In addition to the P’urhépecha flag, the community guards of Cherán and other indigenous communities have adopted the image of the Virgin of Guadalupe.

This is surprising given that the cult of the Virgin of Guadalupe has not historically been strong in P’urhépecha communities compared to the cults of the Virgin of Candelaria, Nativity, and Immaculate Conception, or The Assumption of the Blessed Virgin Mary.

Indigenous resistance to the drug cartels has led to an unexpected strengthening of community ties and new demands on the federal and state governments.

In 2012, Cherán became the first municipality to hold elections according to its “ways and customs,” and its Consejo Mayor (Great Council) has been legally recognized. Other indigenous communities are following Cherán’s example. These steps show that the community guards have moved beyond armed defense and are refashioning the relationship between indigenous communities and the apparatus of the Mexican state.

Although the Mexican Constitution grants self-governance and self-defense rights only to indigenous communities, many mestizo cities and villages have also taken up arms to expel organized criminals.

The most notable of these new self-defense groups are in Michoacán’s Tierra Caliente region, which lies to the south of the P’urhépecha heartland. The groups exist throughout the state, however, and there is evidence that they have spread to other parts of the country. To legitimize their efforts, the self-defense groups have sought to link themselves rhetorically with the indigenous community guards, even though the two types of groups have different members, goals, and methods.

While the community guards are made up almost entirely of indigenous rural workers, the self-defense groups have a more diverse membership. Mestizo peasants, ranchers, small-scale merchants, and urban employees all fill their ranks, and some have been accused of being former members of the Knights Templar cartel. 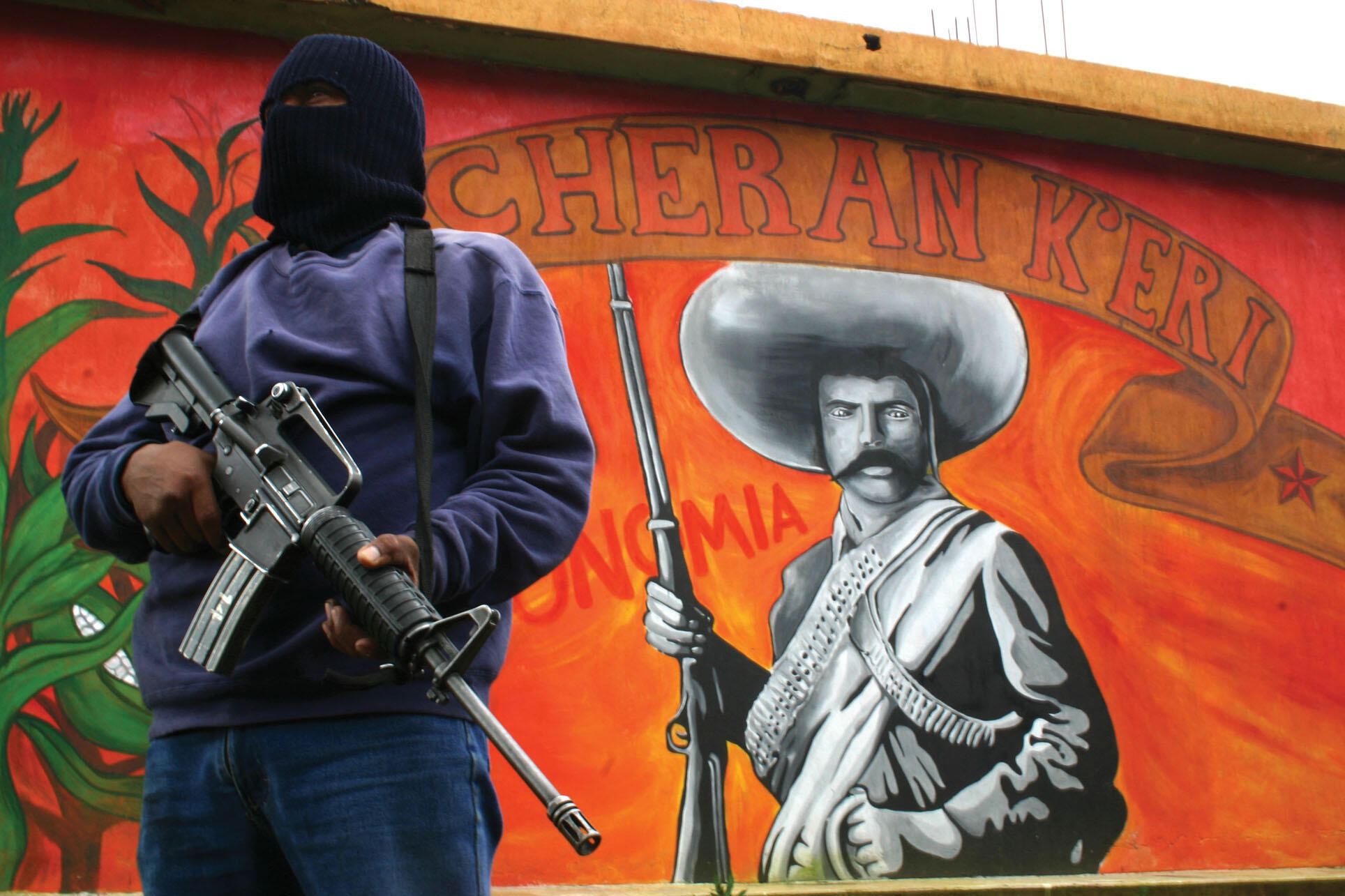 The self-defense groups are also much better armed. The community guards depend on weapons ranging from machetes to hunting rifles, but the self-defense groups are seen toting high-powered firearms that are legally restricted to members of the Mexican Armed Forces. While the self-defense groups claim that the guns were confiscated from the Knights Templar, the presence of high-caliber weapons among their ranks does raise questions.
Similarly, when it comes to financing, the P’urhépecha movement operates on a much smaller scale. It is financed by community members, including those who live abroad, and by national and international supporters. The self-defense groups, on the other hand, can count on donations from farmers, cattle ranchers, and businessmen who have been affected by organized crime; protection fees of an estimated $2 to $3 million per month that used to go to the Knights Templar; and support from towns and cities. There are also rumors that some of the groups are funded by criminal rivals of the Knights Templar.

Despite their uncertain future, both the community guards and the self-defense groups have achieved significant milestones. They have prompted authorities to attempt to reestablish law and order in areas of the country where criminal groups had operated with impunity. And, while distinct, both are notable examples of how local societies can successfully organize themselves to restore some degree of stability to communities threatened by criminal organizations and official neglect.

Lorena Ojeda is a professor of History at the Universidad Michoacana in Mexico. She is a visiting scholar in the Department of History at UC Berkeley supported by the Fulbright García-Robles and CONACYT grants. She spoke for CLAS on March 19, 2014. 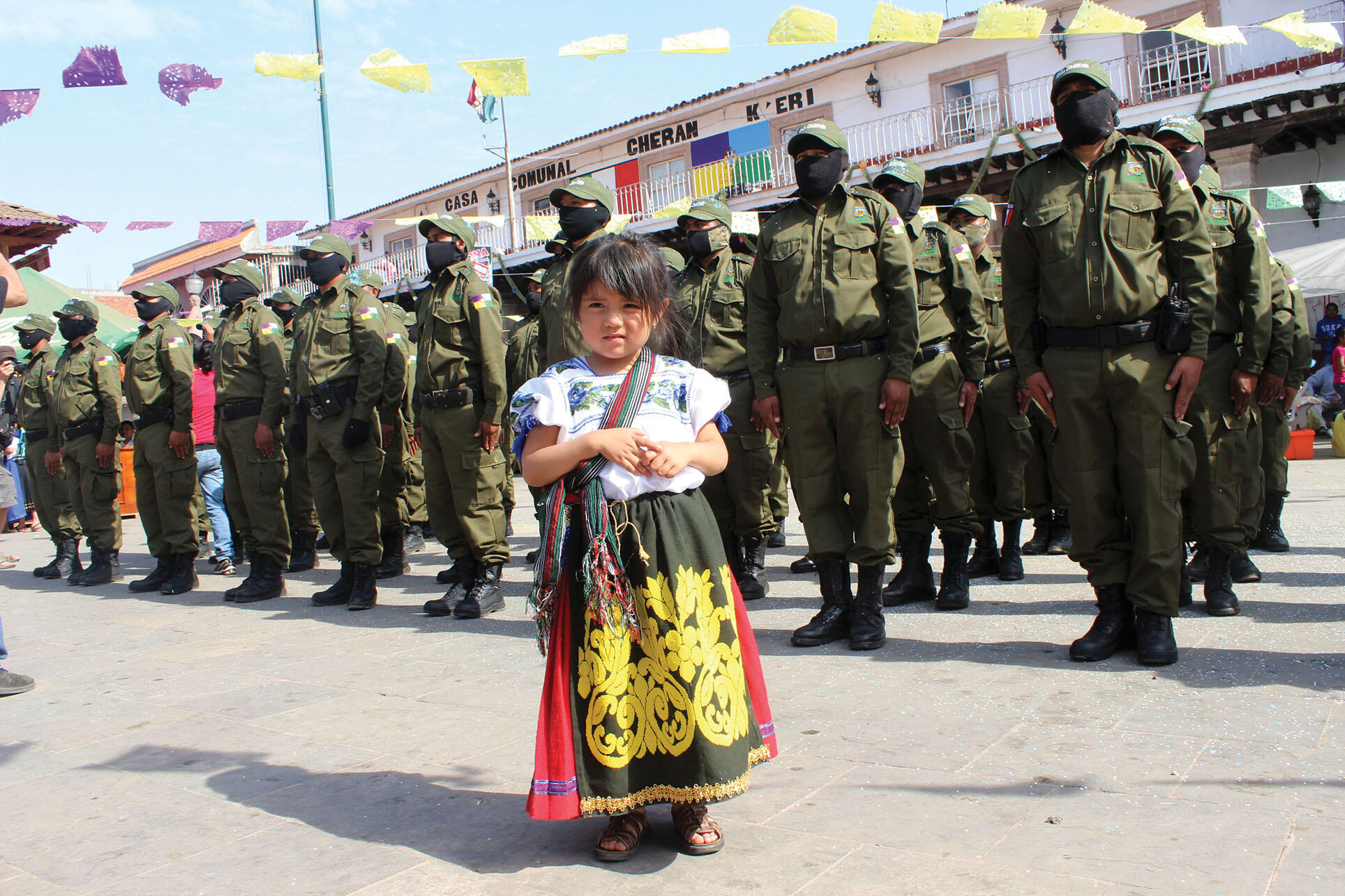