MEXICO: The Zapatistas vs. AMLO 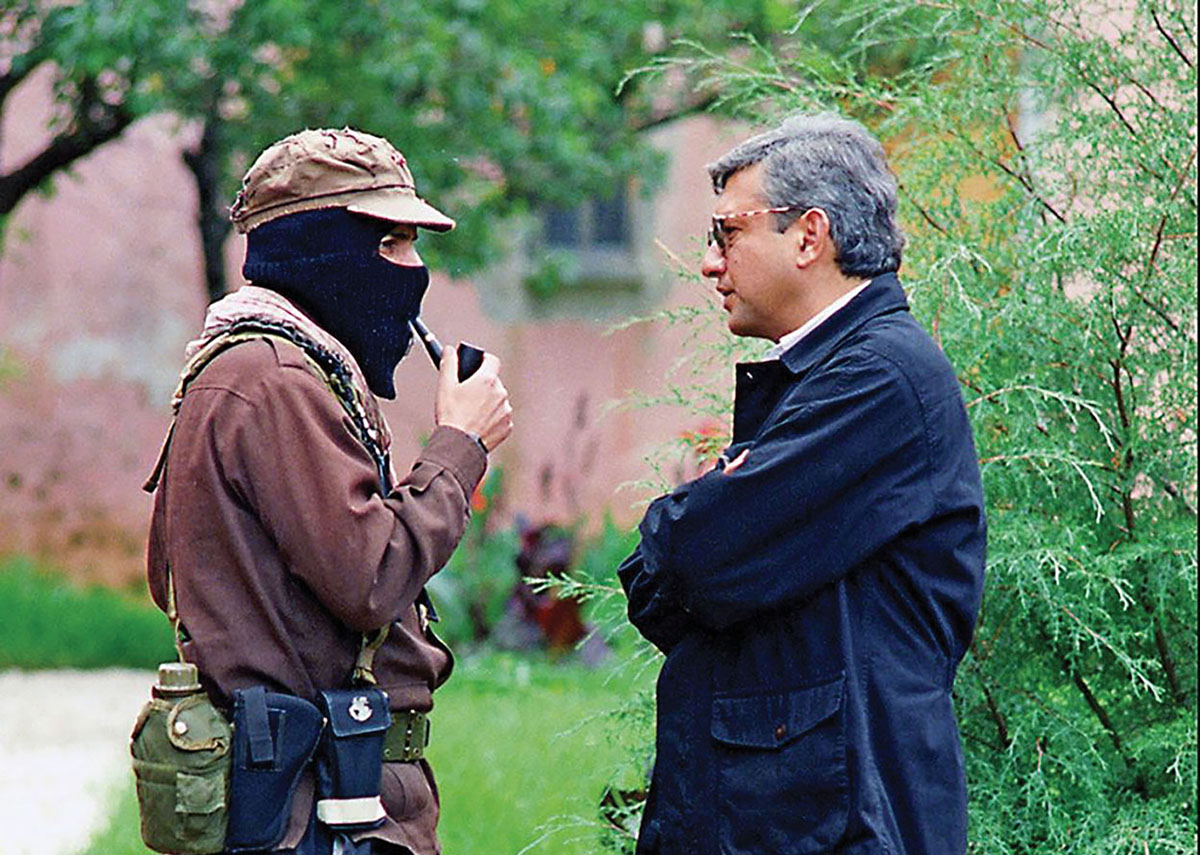 We will stand up to what comes because we will not allow his project of destruction to be implemented here. We are not afraid of his National Guard, which is just the army under another name. He renamed it so he wouldn’t have to admit it’s the same army as always. [...] If Mother Earth could speak, she’d say, “Fuck off!” Mother Earth doesn’t speak, but if she did, she’d say, “No! Go fuck yourself!”

This falling out between AMLO (the acronym by which Mexico’s president is widely known) and the EZLN was not a new one. It can be traced back all the way to the 1990s, when López Obrador was the national president of the Partido de la Revolución Democrática (PRD, Party of the Democratic Revolution). Although neither side wanted to recognize a formal alliance, the movement and the party enjoyed each other’s sympathy. However, after the PRD had won a significant number of towns in Chiapas and seats in the local and national legislatures, the party proved unable — or unwilling, in the Zapatistas’ eyes — to carry out the social and political demands of the movement. Then in 2001, when they marched to the capital in support of the Indigenous Rights Bill, the 24 Zapatista commanders did not receive the welcoming reception they were expecting from AMLO, Mayor of Mexico City at the time. 2 Another falling out occurred in the wake of the 2006 presidential elections, when López Obrador blamed the EZLN’s Otra Campaña (Other Campaign) for his defeat, as some pundits sympathetic to AMLO’s presidential bid attributed part of the low voter turnout to the Zapatista call to reject political participation. 3

Nonetheless, Zapatista distrust of party and electoral politics and the movement’s disenchantment with the partisan left has been present in EZLN discourse since the beginning of the movement, as many authors have indicated (see, among others, Legorreta Díaz, 1998; Estrada Saavedra, 2007; Sonnleitner, 2001; Trejo, 2012). Tired of being excluded, ignored, or co-opted by party and corporatist peasant leaders, the Zapatista support bases grew distrustful of the political parties and the electoral processes.

Mexico’s democratic transition in the 1990s allowed the country to begin experiencing more competitive elections and different parties in power. As elections became more routine and changes in power allowed a more plural political system to flourish, contentious politics were successfully funneled through more institutional channels. In my previous work on the Zapatista cycle of protests in Chiapas between 1994 and 2003, I found that demonstrators concentrated their efforts on municipalities with a greater military presence and still governed by the Partido Revolucionario Institucional (PRI, Institutional Revolutionary Party), while localities that had recently come under the rule of other political parties enjoyed a grace period.

However, my research also showed that as time passed, the honeymoon between Zapatista demonstrators and incoming political parties gave way to disenchantment after local governments failed to meet or completely ignored the demands of the movement. By the third year of PRD government, protest activity in these localities appeared to be as high as during the second year of any other local PRI government, demonstrating that changes in power meant little advancement of the Zapatista agenda in the conflict zone.

Nevertheless, hopes for achieving peace and further democratizing changes ran high, especially since negotiations between the Zapatistas and the federal government were being held during the same time that political elites sought reforms to allow for fairer and more transparent elections throughout Mexico. Between 1994 and 1996, these two negotiating processes marked the course of the movement and the type of democracy that emerged. On the one hand, protracted peace talks between the EZLN and the federal government led to the San Andrés Accords in February 1996, which proposed the legal recognition of Indigenous peoples’ autonomous political power. On the other, legislative elites negotiated political reforms that gave rise to the two entities in charge of organizing and regulating free and fair elections: the Instituto Federal Electoral, now the Instituto Nacional Electoral (INE, National Electoral Institute), and the Tribunal Federal Electoral, now the Tribunal Electoral del Poder Judicial de la Federación (TEPJF, Electoral Tribunal of the Federal Judiciary).

However, these hopes for a more peaceful and stronger democracy were ephemeral. Given the movement’s great salience both within the country and abroad, the EZLN was poised to become an influential political player in Mexico’s democratic transition. Nonetheless, the Zapatistas did not become counter-elites like the insurgent movements in El Salvador and South Africa that pushed an insurgent path to democracy from below (Wood, 2000).

In my book, The Zapatista Movement and Mexico’s Democratic Transition (Oxford University Press, 2018), I argue that the parallel process of protracted peace and democratizing negotiations was more an obstacle than an opportunity for the Zapatistas to advance their political demands. Political elites negotiating electoral reforms were separated and shielded from further social pressure to deepen mechanisms of representation and accountability or the inclusion of the San Andrés Accords into the reforms. In addition, the absence of formal alliances between the EZLN and political parties and the lack of electoral accountability also protected the political elites from facing the characteristic uncertainty and vulnerability that others have endured during the throes of transition. Under such conditions, those negotiating peace with the Zapatistas could focus on managing the conflict, while those involved in democratizing negotiations could concentrate solely on regulating electoral competition.

The reforms did have significant repercussions, however. In 2000, PAN nominee Vicente Fox won the presidency in what are considered Mexico’s first free and fair presidential elections. Nonetheless, electoral results for state legislators didn’t follow the same pattern of change. The chart above shows the changes in seats held by political parties in the Chamber of Deputies from prior to the Zapatista uprising in 1996 through 2003.

Likewise, the PRI maintained its dominance across electoral districts in Chiapas, despite the 1996 redistricting, as I describe in my book:

Before the EZLN uprising, all nine districts in the state were under the control of the PRI. In the 1994 elections, only District 5 (Tapachula) went to the PRD. Redistricting of the state of Chiapas before the 1997 elections involved partitioning the largest districts and creating three more: Ocozocuautla de Espinosa, Chiapa de Corzo, and Motozintla. The PRI carried those three districts, but lost Districts 9 (Tuxtla Gutiérrez) and 12 (Tapachula) to the PRD. In the 2000 and 2003 elections, District 12 (Tapachula) went to the PAN. (Inclán, 2018: 49-50)

A true plurality of parties in legislative power would only be seen in the state of Chiapas after the period under study, following the 2006 and 2009 elections. In 2006, the PRI and the Partido Verde Ecologista de México (PVEM, Ecological Green Party of Mexico) coalition held seven of the 12 districts and the PRD, the Partido del Trabajo (PT, Workers’ Party) and Convergencia Democrática (CD, Democratic Convergence) took the other five districts. In 2009, the PRD held on to five districts, the PAN also took five, but the PRI only managed keep two districts (Inclán, 2018).

The electoral reforms of the 1990s did generate significant changes in voter turnout as well as the parties’ winning percentages, however:

In 1991, the PRI winning percentages of the vote varied from 59.6 percent, with a 52.6-percent turnout in Tuxtla Gutiérrez, to 85.7 percent, with a 78.7-percent turnout in Comitán. During the 1994 elections, the winning and turnout percentages resembled those in 1991. Since 1997, however, parties have been winning electoral districts with electoral turnouts as low as 24.8 percent in Ocosingo and winning percentages as low as 33 percent of the vote (PRD in Tuxtla Gutiérrez). At the local level, prior to 1994 only one of the 111 municipalities in Chiapas was under PAN rule. All the others were dominated by the PRI. But in the 1995 elections the PAN gained four municipalities, while the PRD won 18. However, the PRI prevailed in the region of conflict (Sonnleitner, 2012). Still, by 2001 the PRI had lost a total of 46 municipalities to other parties (IEE-Chiapas, 2003, cited in Inclán, 2018: 49-50)

In sum, opposition parties began gaining considerably larger representation in both legislative chambers, and in 1997, the PRD gained control over Mexico City’s governorship. Meanwhile, the PRI lost its legendary majority in Congress, which it would never regain without alliances with other political forces in the legislature, given the limits on majority rule imposed since the 1996 electoral reforms. 4

This more-plural face of the political system generated high hopes for a more responsive legislature. Yet, the EZLN did not see it that way. Although an Indigenous Rights Bill was passed in 2001, the approved law did not honor the San Andrés Accords and did not grant Indigenous peoples real political power. Ruling power continues to reside in the municipality; it is up to local authorities to define the type of power to be granted to Indigenous peoples and communities.

After the Indigenous Rights Bill fiasco, the Zapatistas grew frustrated with negotiations and with the democratization process as a whole. They abandoned the dialogue and their protest activity. In August 2003, they turned to a new form of mobilization: organizing their own autonomous authorities, the Juntas de Buen Gobierno (Good Governance Councils), despite the lack of legal recognition. 5 Since then, Rebel Zapatista Autonomous Municipalities have been surviving, thanks to support from the local and transnational network of solidarity organizations that sympathize with the Zapatista cause.

The Zapatistas’ self-imposed distance from party and electoral politics is not the fault of a single individual. To attribute it to Andrés Manuel López Obrador alone would give him too much credit and not enough credit to the Zapatistas themselves, as their distrust in party and electoral politics predates even their clandestine guerrilla organization in the 1980s. Indigenous peasants in Chiapas had begun organizing independently from the corporatist Central Nacional Campesina (CNC, National Peasant Confederation) in the 1970s, and some of these independent unions of ejidos (communally farmed land) served to build up EZLN bases of support across Indigenous communities (Legorreta Díaz, 1998).

Nonetheless, it is AMLO who now heads the federal government, and the Zapatistas have welcomed him with a harsh communiqué stating their open opposition to his economic development project. Indeed, their welcoming letter to his inauguration was very much along the lines of their letters to President Ernesto Zedillo in 1994 and President Vicente Fox in 2000, which contentiously confronted how both the PRI regime and the incoming panista president intended to handle the Chiapas conflict. 6A  6B  As in these two previous cases, the EZLN is still waging a fight against a federal government that wants to continue imposing an exploitative development model without considering its negative consequences. Meanwhile, the Zapatistas weigh their options to challenge this status quo as the only opposition force that AMLO hasn’t dared discredit yet. 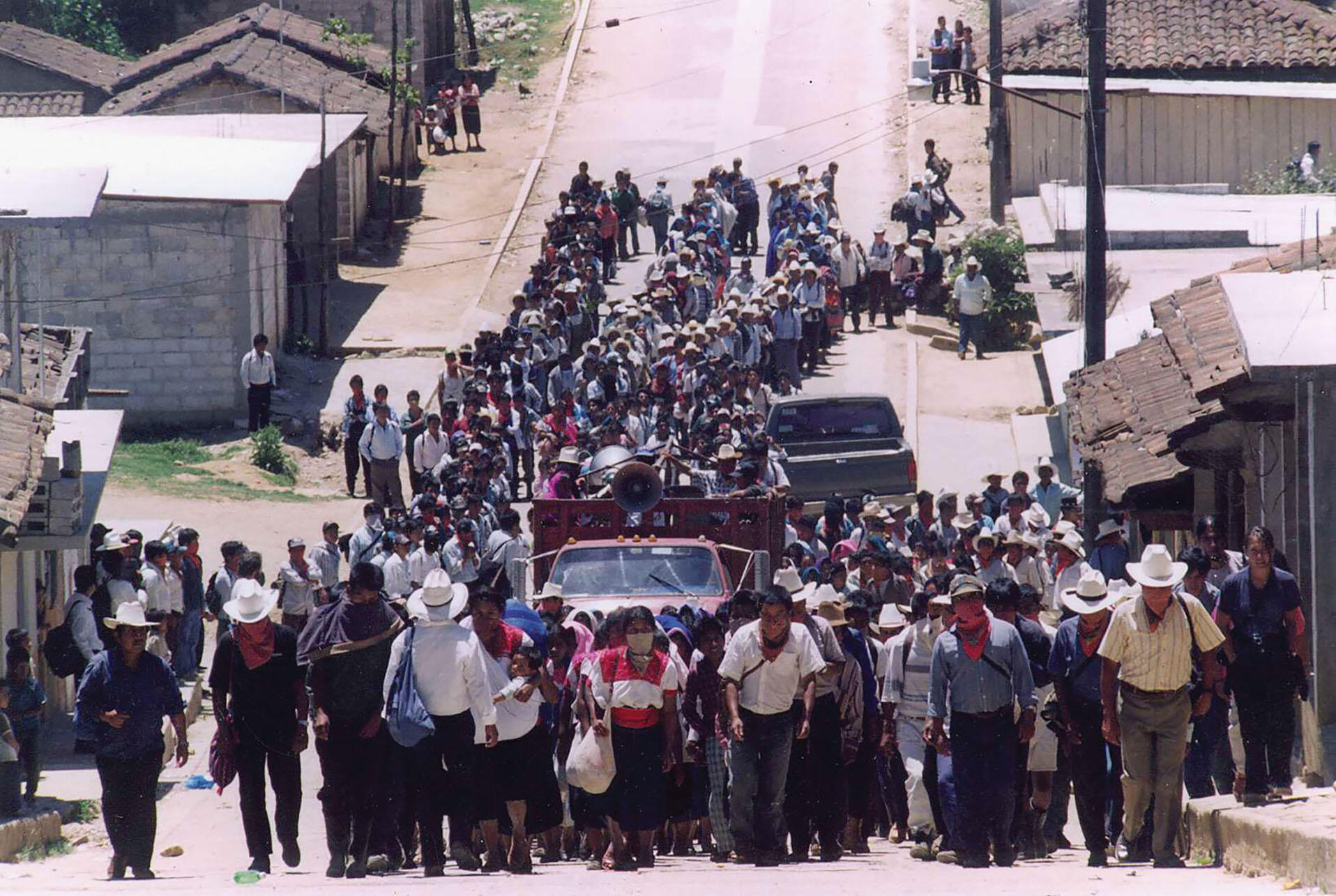 Inclán, María. (2009). Sliding Doors of Opportunity: Zapatistas and their Cycle of Protest. Mobilization: An International Quarterly 14(1): 85-106.