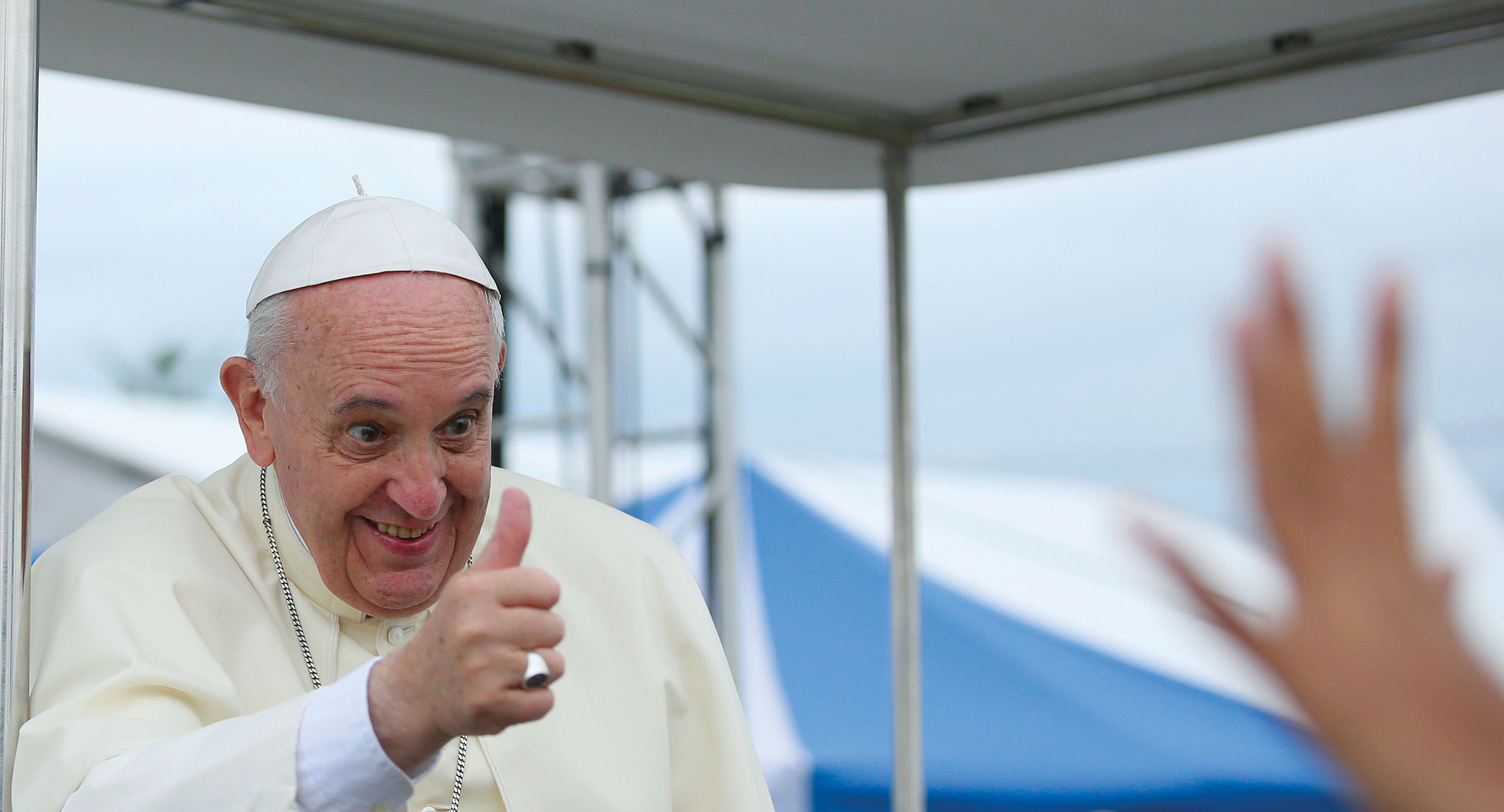 First of all, he is an incredibly happy man, a man at peace with himself and with the world. He seems comfortable in his skin. But most of all, he is fearless. Although he still ends most encounters with the petition, “Pray for me,” he is smiling and radiant. In accepting the heavy cargo that is the papacy, with all of its entanglements, intrigues, risks, and dangers, as well as its daily uncertainties, Pope Francis is calm and reassuring. Whatever happens, it will be all right. He needs company and conviviality. He is no longer of the Society of Jesus, the Jesuits; he is not walled up in a rectory of aging priests. He is a lucky man, fully in in the world, surrounded by people, families, students, visitors from parts known and unknown. He is as if freed from a burden. He can say what he wants, even surprising himself at times.

June 2015 will see the release of the pope’s long-awaited encyclical on climate change and global warming and their effects on soil, water, and all the creatures, including humans, whose survival depends on a healthy and sustainable planet. The pope sounds quite a lot like the Latin American ecofeminist Ivone Gebara, when he says, “the worldwide disruption of the physical climate system and the loss of millions of species that sustain life are the grossest manifestations of unsustainability.” In preparation for his encyclical, Pope Francis convened many workshops and, in April 2015, two linked, back-to-back, plenary advisory sessions at the Pontifical Academy of Social Science: the first on “Human Trafficking: Issues Beyond Criminalization,” from April 17-21, 2015, and the second, on April 28, on “Climate Change and the Common Good,” at which UN Secretary General Ban Ki-moon spoke and said of Francis, “I count on his moral voice, his moral leadership.”

The invitation by the Chancellor of the Pontifical Institute, Marcelo Sánchez Sorondo, and President Margaret Archer to participate in the plenary session on human trafficking was a surprise. Having published several articles on clerical sexual abuse over the years and having criticized church teachings on women, sexuality, and reproduction in my books and edited volumes, I feared the invitation might have been a mistake. But I prepared for the event assiduously. The plenary was organized at the request of Pope Francis, who wanted the academy “to examine human trafficking and modern slavery” to which he added pointedly: “Organ trafficking could be examined in connection with human trafficking.” On arrival at the airport, a Vatican car and driver was waiting, and he drove at breakneck speed, taking the curves like a motorcyclist. I apologized after each stifled cry. We rolled into the Vatican, and I was unceremoniously deposited with my heavy bags and two computers (in case one wouldn’t work). 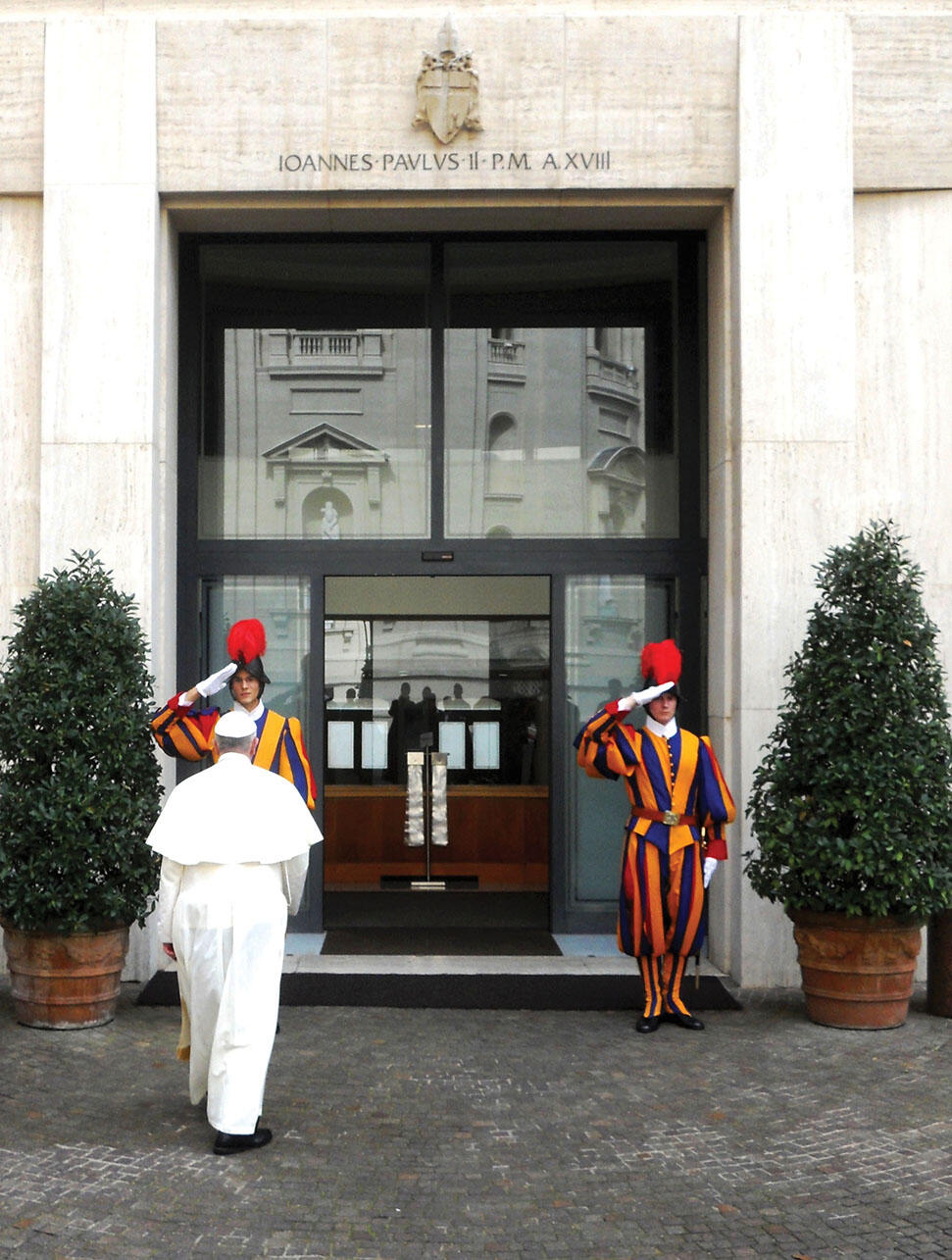 The building was called Domus Sanctae Marthae in Latin; it sounded familiar. It certainly should have rung a bell, but it didn’t at first. My room was an elegant but simple suite of two rooms with large, high windows. A bedroom with a single bed, a plain cross on the wall, and a bureau with a flat-screen TV that I would never use. Restless, I went downstairs to the dining room, where I was served a three- or four-course lunch that was still somehow light. Delicately seasoned and organic, the meal was served with an exquisite red wine. But I had arrived first, and I was all alone in a sea of men in black and white cassocks or brown robes.

So it was to be every day after the other scholars and participants arrived for the plenary meeting. There were 29 of us in all: 11 academic social scientists, three of whom were Catholic clergy (including two archbishops), an amazing 11 of us women, including one nun, and several representatives of anti-trafficking organizations, government representatives, and members of international agencies (UN, ILO). At the Santa Marta guesthouse, however, we women were in the minority by spades, and we adapted easily to the dress code of women in black or dark pants and men in long white frocks. In the end, clothes did not make either the man or the woman. Nonetheless, gender was still highly marked, and many priests, monks, and bishops staying there were uncomfortable sharing a table with a woman, let alone talking to her.

Where should I put my eyes, my hands? I looked up, and there he was, at a small table in the corner, Pope Francis eating and chatting with a priest, most likely a Franciscan, in a brown robe. Oh, no, I thought, I must be in the residence where Pope Francis lives, and he is sitting right over there. I quickly swallowed what I could and all but ran up the flight of stairs, and there, I realized that my rooms were cater-corner to the pope’s private residence announced by a glorious wall of stained glass. I thought about Pope Francis as I went to bed and again when I woke up in the morning.

I felt blessed to be in that space. Would I now need to reconsider renouncing my status as a Catholic (but maintaining an identity as a “deinstitutionalized” Franciscan Catholic) in response to the cover-up of clerical sexual abuse in the United States, Ireland, Canada, and Brazil? I had sorely missed the simple beauty of a Mass well celebrated, and I readily accepted the invitation by Bishop Marcelo to participate in a small, intimate Mass every morning led by a different bishop or cardinal each day in Saint Peter’s crypt. Holy Communion was the best bread for a hungry soul. There, in the bowels of Saint Peter’s cathedral, once again on my knees, the old habits and “habitus” returned along with, if not exactly faith, my former suspension of disbelief. The words of the Latin responses — mea culpa, mea culpa, and mea maximum culpa — glided off my tongue like anxious little captives who had been freed after a long time. I began to pray again, and I prayed for the pope’s safety as well as that of my family, dispersed as
we were.

Our task at the plenary, in addition to presenting our papers, was to work on a draft of recommendations regard-ing the Prevention, Criminalization, and Resettlement and Rehabilitation of Trafficked Persons. Among our recommendations were that all nations having ratified the ILO Convention (1957) would make forced labor a criminal offense with commensurate penalties and that assets seized from convicted traffickers should be used for the basic needs and rehabilitation of victims of human trafficking. We also called for the creation of a WATO (World Anti-Trafficking Organization) as a watchdog to the WTO (World Trade Organization) to make visible the complicity of transnational industries in the exploitation of trafficked workers. Following Pope Francis’s directives, we recommended that repatriation and return of trafficked persons should never be mandatory. Rather, the country of designation should bear the burden for the resettlement of victims of human trafficking, opening a “pathway to a passport.”

The Conversion of the Militant Anthropologist

The highlight of our meetings was the special pontifical academy papal audience. On approaching the Holy Father, the man I had written about in a critical piece soon after he was elected, I blanched and wanted to hide. But my old Catholic self came to the rescue, and I thought, well I, too, can ask forgiveness. I tried to bend down and kiss the pope’s ring, only to discover that he had no papal ring to kiss. So I awkwardly kissed his bare hand, as a gentleman from Vienna might have done upon being introduced to a woman he did not know. I was terrified that I would be pulled off the line, as I had been on the day of my First Communion because my veil was on wrong, with the elastic strap awkwardly under my chin rather than tucked under my hair. But not one of the papal bodyguards in tuxedos stepped up to intercede and take my gift package of books from my hands. I was given a set of pearly white rosary beads, but not until after I had a moment to ask Pope Francis to please remember the women, the ones unable to bear so many children and so many losses. I pointed to the chapters on drought and thirst in my books and articles, on the madness of hunger among rural workers in the cane, and the weight of the world on the shoulders of poor women and their angel babies.

Francis the Good had done so much good already, surely he might consider the women, the women who need him as much as he needs them to make his conversion complete. Throughout our short stay at the Vatican, Pope Francis responded immediately to the tragedy of the capsized boat of African refugees that sunk off Italian shores. He accepted the resignation of a bishop in Missouri who had protected a clerical child sexual predator. He initiated the beatification of Dom Hélder Câmara, the “little red archbishop” of Recife who had sheltered me when I got in trouble with the 5th Army of Brazil in 1965 and who welcomed me (and my family) back to Brazil in 1982, during the Brazilian democratic opening (the abertura), when he reminded me that my duty as an anthropologist was to listen, observe, and to write about the institutions of invisible violence of hunger and drought in the badlands of the interior of Pernambuco.

The next morning, I was picked up by the same Vatican chauffeur, but it wasn’t the crazy ride to the airport that worried me now. When my flight stopped in Chicago to clear customs, I read the headlines about the arrests the day before of nine people on the island of Sardinia who the Italian police had connected to a Qaeda-linked terrorist cell that had been planning to strike the Vatican and Saint Peter’s square as part of a “big jihad in Italy.” May God protect him…

Nancy Scheper-Hughes is Professor and Chair of Medical Anthropology at UC Berkeley. 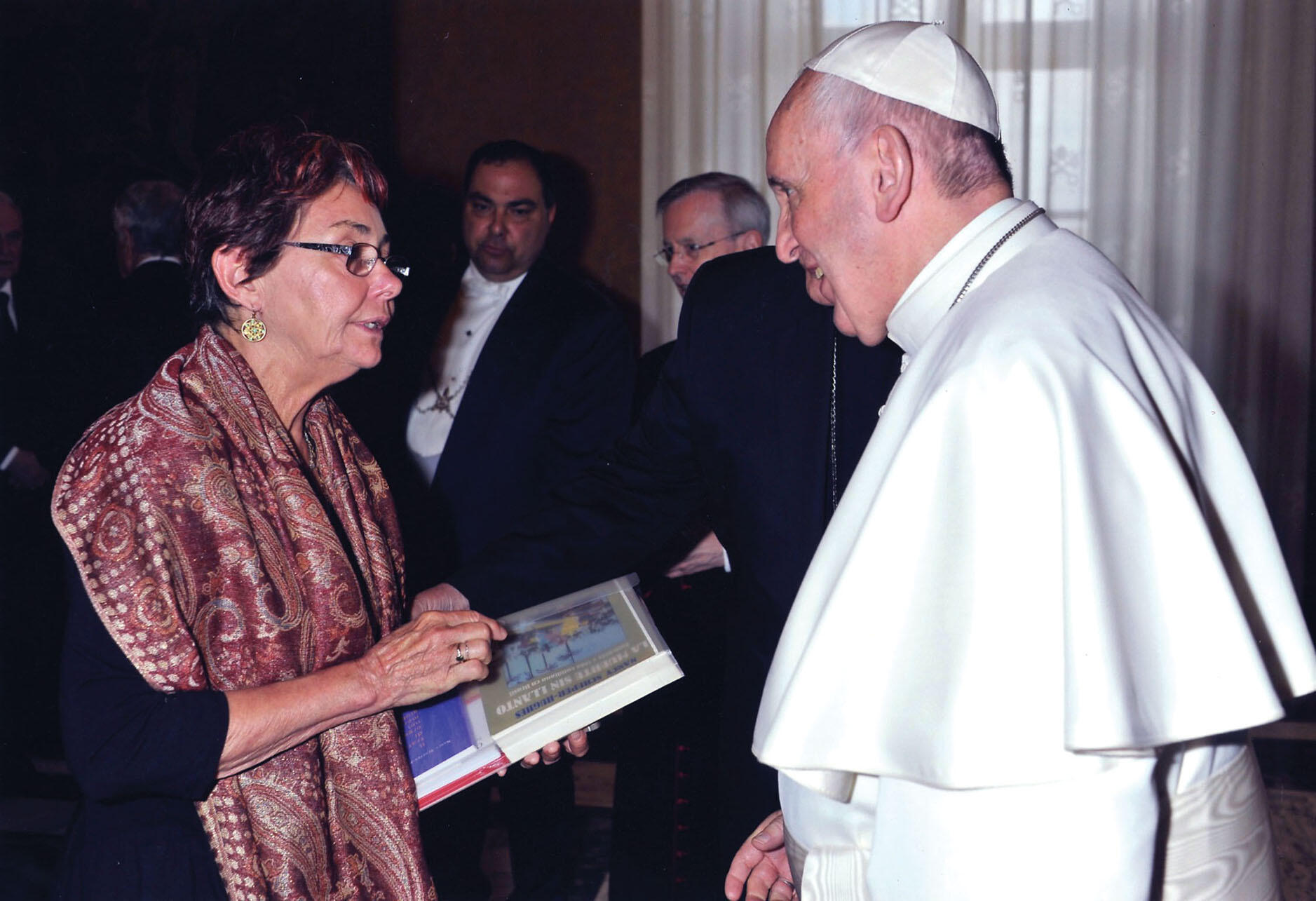